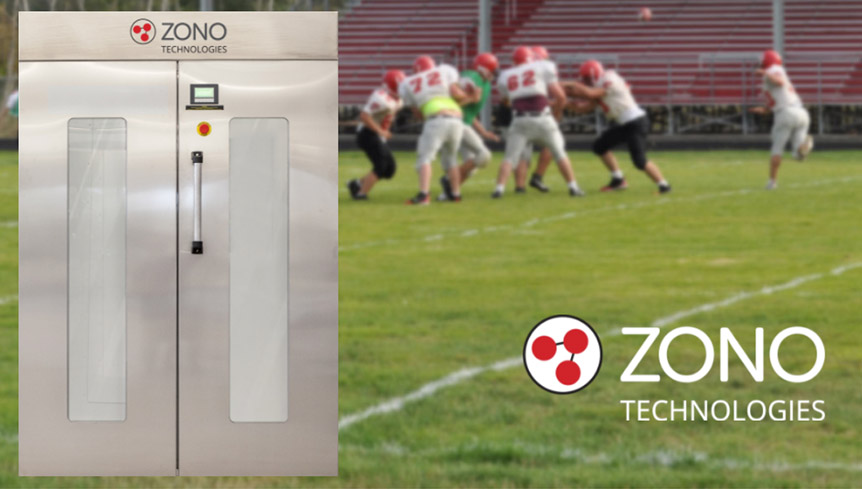 In 2009, Walter Mann reached his breaking point. With four children playing sports, his garage smelled increasingly like a locker room. He had to do something about it. So, in that very same garage, he invented what would become known as the ZONO Disinfecting and Sanitizing Cabinet, and its integrated cart system.

“Today, more than 850 organizations across industries such as sports, child care, public safety, fitness, museums and more use our ZONO machine,” says Mann. “We’ve partnered with NASA, we’ve got customers who were in the NFL playoff hunt, and we’re used by major college football programs. But I created the ZONO for folks like me who were looking to cure a common problem, which is to eliminate unpleasant odors — and disinfect and sanitize equipment quickly and safely — so we can all remain as healthy as possible.”

The ZONO Disinfecting and Sanitizing Cabinet sanitizes equipment by turning oxygen in the cabinet into ozone gas, which is just plain old breathable oxygen (O2) with an extra oxygen atom (which makes O3). Ozone is toxic to organic matter. That extra atom is highly reactive and kills 99.9% of bacteria* and 99.99% of viruses+ in the cabinet.

Ozone has been recognized as one of the most effective microbe killers since the early 1900s. Today, ozone is commonly used across the world in multiple applications as a germ killer. It’s quick, easy and inexpensive to produce. It disinfects and sanitizes items that are not washable, and it does so without forcing the user to interact with harsh liquid chemicals that might cause damage or expose the user to potential hazards. Its effectiveness is above reproach.

The ZONO has been tested by many organizations. For example, the Georgia Institute of Technology tested the ZONO against the influenza A virus, which is an enveloped virus that they deemed a surrogate for SARS-COV2 which causes COVID-19. ZONO does not publish these results because ZONO only publishes efficacy results against recognized standards such as those published by ASTM.

“To our knowledge, nobody else publishes tests against recognized standards,” says Mann.

To be clear, the ZONO Disinfecting and Sanitizing Cabinet kills 99.99% of common viruses+ on non-porous surfaces and 99.9% of common bacteria* on non-porous, porous and semi-porous surfaces. For what might seem like a potentially complex solution to an exceedingly elusive challenge, the ZONO is straightforward and simple in its application. The ZONO uses push-button control, ozone concentration, and specific humidity to achieve a verified kill rate. Its integrated mobile cart system facilitates equipment transport and avoids cross-contamination. Athletes can simply set their equipment on the cart. Equipment managers roll the cart into the ZONO, press a button and pathogens inside the ZONO are killed in 30 minutes. No rinsing or wiping is needed. Equipment is immediately available for use out of the machine.

As head football equipment manager, Trent Chesnut is in his 21st season with the University of Illinois. When the Fighting Illini opened their new football facility in July 2019, they added the ZONO Disinfecting and Sanitizing Cabinet to their disinfection repertoire.

“It’s been a God-send for us,” says Chesnut. “We really wanted the ZONO based on recommendations from other equipment managers and folks in our industry. Personally, I love the cart system. We have three carts and rotate between them. Nearly anything a coach uses, we zap that with the ZONO. Basically, anything that doesn’t go in a washing machine, we can put it in there and sanitize it.”

After the last 12 months, understanding why a standardized disinfection process matters couldn’t be more clear. Establishing a documented and verifiable process for disinfection and sanitization is essential. ZONO is a key component.

Here’s the bottom line. The ZONO Disinfecting and Sanitizing Cabinet performs the priceless task of killing dangerous pathogens on gear in as little as 30 minutes.

“We try to make the ZONO simple, safe and sustainable,” says Mann. “Our straightforward process is safe and works on items that are difficult or nearly impossible to sanitize using traditional methods. Things like helmets, shoulder pads, gloves, cleats, electronics and more can now be disinfected and sanitized. The ZONO helps eliminate offensive odors from bacterial waste products or decomposing bacteria. The ZONO also positively impacts recruiting, because parents and families remember the smell of a fresh locker room and appreciate it.”

“Let’s also not forget that, in that half hour while the ZONO does the work, your equipment manager can be otherwise improving your program. He or she isn’t spending 30 minutes ineffectively wiping down equipment. On the cost side, after you implement the ZONO, your cost is less than 3 cents of electricity per use. It can be operated in high-traffic areas, is cool and safe to touch, and doesn’t emit harmful byproducts. The ZONO is a pest-control device, regulated by the government, and is produced in an EPA-regulated facility. We offer a three-year warranty because it just works. And if you experience problems or damages — we’re here to handle it.”

For more information about the ZONO Disinfecting and Sanitizing Cabinet, please visit www.ZONOtechnologies.com.