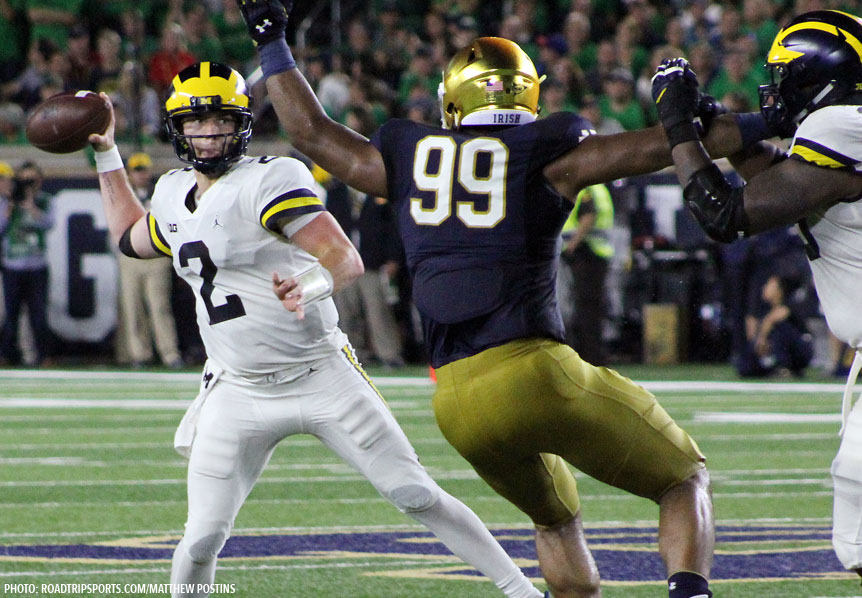 Not every move will work for every player, but everything else leading up to the initial move and after the move is what makes a great pass rush. Understanding how to attack the man in front of you, being explosive from your first step, forcing your offensive lineman to his heels, having great flexibility/mobility, knowing when to throw your move, and being relentless on point of attack are all focus points for developing an effective pass rush.

The following coaching points will help put each player in a position to be successful in the pass rush game. Here, we’ll focus on getting off the ball, hand/eye coordination, incorporating flexibility and mobility into drills, and creating the good habit of finishing.

I am not heavy on which stance to use; it’s more about the player being more comfortable in his stance and understanding what we are trying to accomplish coming out the stance. The only thing that changes with our pass-rushing stance is we want to recognize it’s a pass rushing down and elongate our stance just a little bit.

This means we want to bring our foot that is staggered back inside a bit, almost looking as if we are track runners getting ready to fire out of the blocks. No matter what stance my guys choose to be in – whether two-, three-, or four-point – we preach the same coaching points.

Next, we get right into training the get-off. I can’t explain to my guys enough how important getting off the ball is to a great pass rush. A great get-off creates chaos with the offensive lineman and forces him to lose his technique or make a bad decision.

Your first focus should be getting off that ball as quick as you can so you can close down the gap between you and the offensive lineman with the goal of throwing your move. If you never close down that space, then you will never have a chance to beat your man or even make a move.

Once you begin to effectively get off the ball, you can make inside moves and begin to play games with the offensive linemen.

We have a few drills where we train the mindset of getting off the ball, making sure we are exploding off the ball and taking longer steps to close the space between the pass rusher and the offensive lineman.

For this drill, you will need either a 6-inch speed hurdle or two cones. You want to place the speed hurdle about 1-2 yards in front of your inside foot and get into your stance having the hurdle between your feet and hands.

In the first sequence, you raise your inside leg while in your stance and move on ball key, keeping all the weight on your opposite leg and exploding through your hips while exaggerating that first step and gaining as much ground as you can. This sequence will give you a feel of how to distribute your weight when coming off the ball.

Then, do the same thing with both feet in the ground and moving on ball key. Make sure to rep this coming out of a left and right stance. There should be no popping up out of stance. Instead, the rusher must drive out like a track runner driving out of the blocks. The rusher must key the ball and keep his eyes on his target, and exaggerate gaining ground with that first step.

Once guys understand the get off concept, we put it together in this next drill. For this drill, you need a hoop, an agility bag, and some forearm pads. Set the hoop down, place the agility bag on one side or the other, have the bottom of the bag even w/ the curve of the hoop but 1-2 yards away from the hoop. (See Diagram 1) 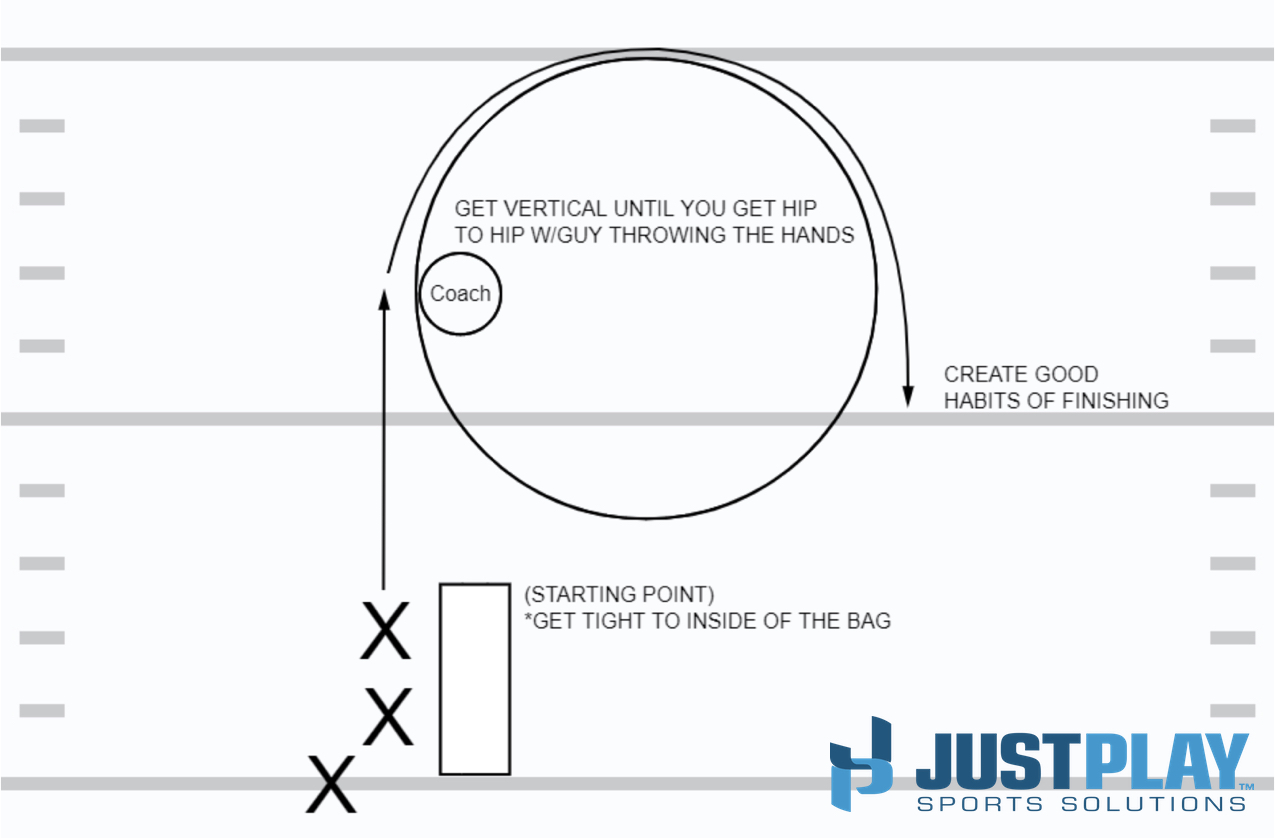 This drill can also go off ball key or command. Have your player start at the top of the bag away from the hoop. Depending on which side you are working, you want to be as tight as you can to the inside of the bag.

During this drill, focus solely on coming out at your hips, taking that big first step, and closing that space between you and the offensive lineman (person holding forearm pads). Get in the habit of coming out your stance at full speed, low and hard, and staying vertical until you reach that point of attack. Some players develop the bad habit of floating off the line and already having their hips flipped. Doing this exposes your chest and makes it easier for the offensive lineman to get his hands on you. Drive out of your stance like an Olympic track runner, low and fast.

Once the athlete closes the gap, the coach with forearm pads shoots his hands low, working the chop with the inside hand and club with the outside arm to finish the move and get his hips turned inside toward the hoop (quarterback). Once the move has been made, finish with a sense of urgency and big explosion. Finish strong!

The next group of focal points consisting of hand-eye coordination and the flexibility/mobility aspects can be worked in all pass rushing drills. I’m a firm believer in training the eyes and showing players exactly what to focus on. Young players tend to have bad habits of watching the quarterback throughout the whole process of pass rushing. If I’m staring at the quarterback the whole time then I have no clue what the player in front of me is doing.

Players need to understand that they should have their eyes in the right place and transition their eyes from focus point to focus point just like a quarterback. As a defensive lineman, I want to have my eyes scanning the guy in front of me as I’m coming off the ball, looking for his hands and when they are being thrown.

Young defensive linemen tend to come off the ball throwing moves at air and landing nothing. For me to throw a successful move, I must see his hands thrown. If you saw in Get-Off Drill No. 2, we added the hands being thrown and it’s not the focus point in that drill but you are training the eyes as well.

The second part to this topic is the flexibility and mobility focal point. The best defensive linemen can change directions with fluidity, bend with no problem, and transition through situations without stopping. Throughout most drills, I try to incorporate some type of transition that helps with flexibility and mobility. I do this because in every play, you must change directions at some point. It also helps create a good habit of staying active through the whole process.

This takes time to develop. The only way to develop it is to maximize reps as much as possible, creating muscle memory where it becomes a reaction. Here are three drills that work all the focal points or at least one of them.

For this drill, we will use four pop up bags and five agility bags. We set up the station as shown in Diagram 2 with two bags in between each pop-up. You can see at the end of the last bag we have one more agility bag that leads to one more pop-up that is acting as the quarterback. 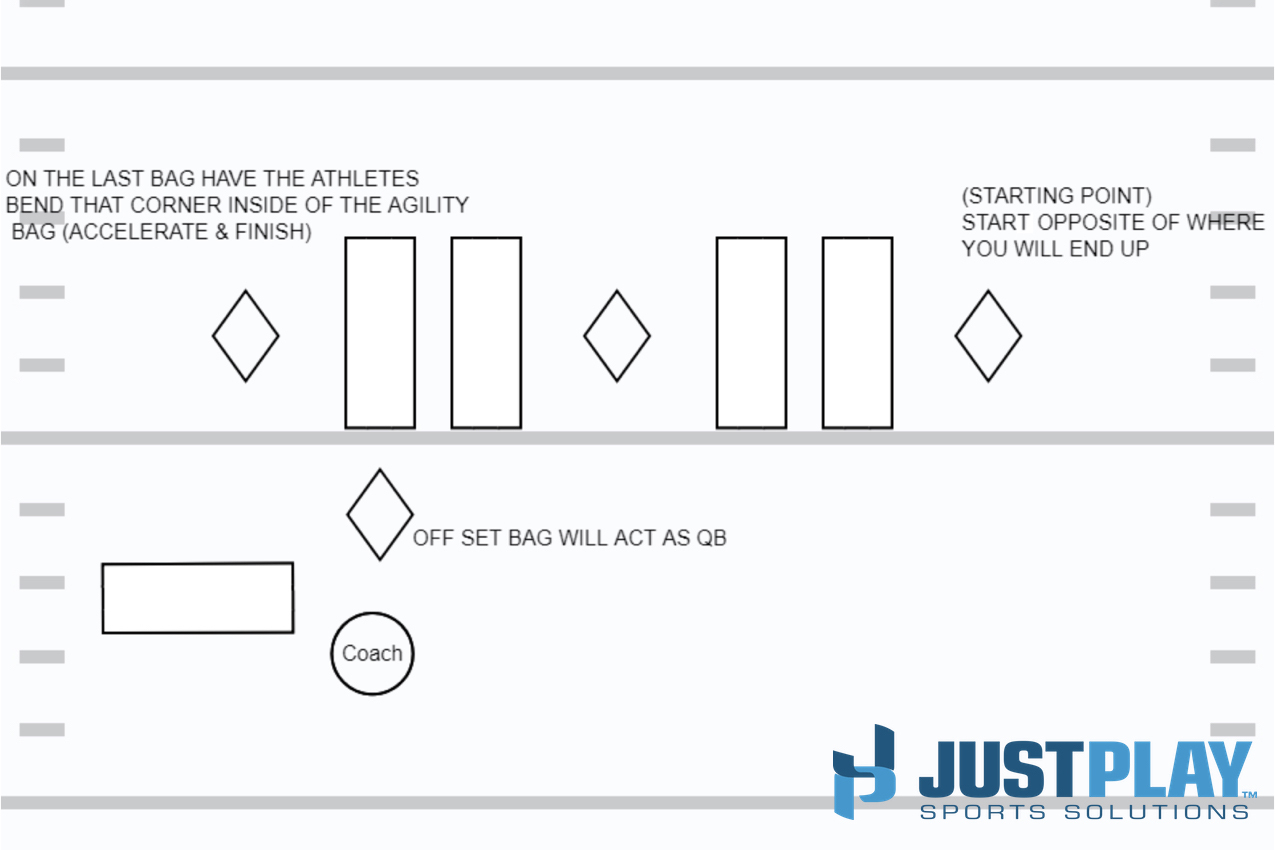 Athletes start on either the left or right of the first bag, chopping the feet and having active hands. The hands should be in a constant tight movement close to the chest.

With any of these drills involving pop-ups or forearm pads, it’s possible to change the move on each bag. For this drill, we could work the jab and swim/rip, the club and swim/rip, or even the spin move. So, if I go to the left of the first bag and make my move, then I will stay left leading with the left foot and transitioning to the opposite of the next bag now leading with my right foot. At the end, the player throws his move, bends and accelerates through the last bag, which is the quarterback.

This drill works the little things in rushing the passer such as having active hands, not letting your arms just be at your side, and working same foot/same hand when throwing your move. It also focuses on flexibility, mobility and hand-eye coordination. We train our guys to go through bags without looking down. They should be able to see the bags through their peripheral vision while focusing on timing up to the next bag.

For this drill, we use about five agility bags, a cut-block ball, forearm pads, and one ball. The hoop is optional; it helps set the drill up. It is set up just as you see in Diagram 3. 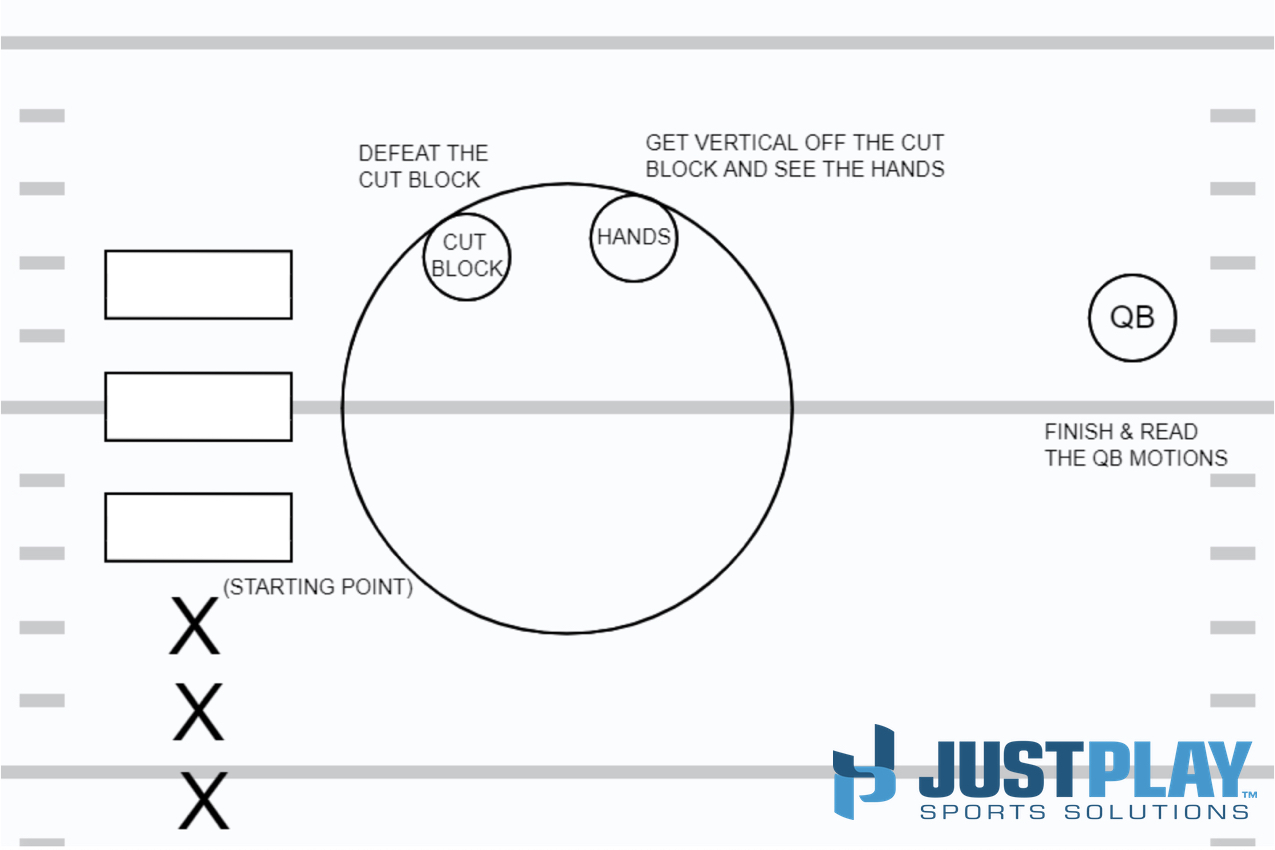 Athletes start on the open-end side, transitioning through the agility bags laterally, defeating the cut block, then getting vertical and transitioning eyes to forearm pads to make a move. Last, once they make their move, they snap their eyes to the quarterback as they finish.

On the finish, we use someone with a ball as a quarterback and the players must react to what they see. if the quarterback breaks his hands and opens up, then our guys are taught to jump straight up to try and deflect a pass without roughing the passer. Do not jump to the side. If the quarterback sits there or steps up, then they run through him.

This drill is another one that focuses on being active continuously, having your eyes in the right places, works on agility and footwork, and learning how to read a QB when finishing.

For the Bend Drill, we will use four pop-up bags and two cones. We use four bags because we will set up both sides at once so we don’t waste time setting up drills. On one side of the top bag, set the cone about 3 yards off from the start. (See Diagram 4) 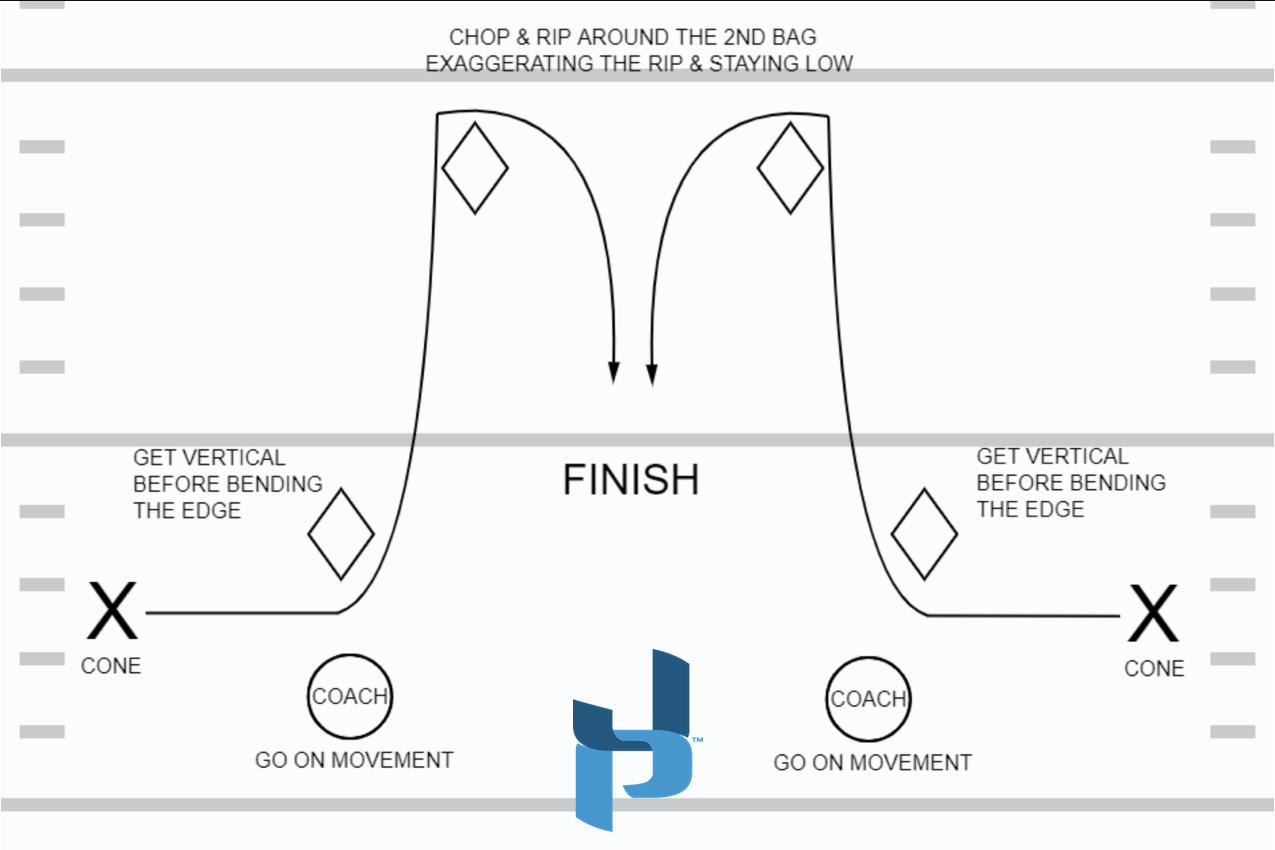 Players start at the cone in their preferred stance and fire out on the ball key. Players must come out their stance low and hard, then as they approach the bag hip-to-hip, we want to chop down as if we made contact with the offensive lineman’s arms. As the player begins to bend the corner on the bag you want to exaggerate the rip-up, finishing the move and keeping the reduced pad level during the move.

As the athlete goes through the second bag, he should have a full speed burst as if he were finishing through a quarterback.

This drill is big for working on flexibility and staying low the whole way through the bend, as well as finishing the move and accelerating through the quarterback.

These are just some of the techniques and drills I have found helpful. Pass rushing happens within about 7-8 yards and you must be able to react to many variables and transition your body through different positions to be successful.

By maximizing reps and staying detailed with your players throughout the drills, you can give them a sense of urgency and focus through the process.