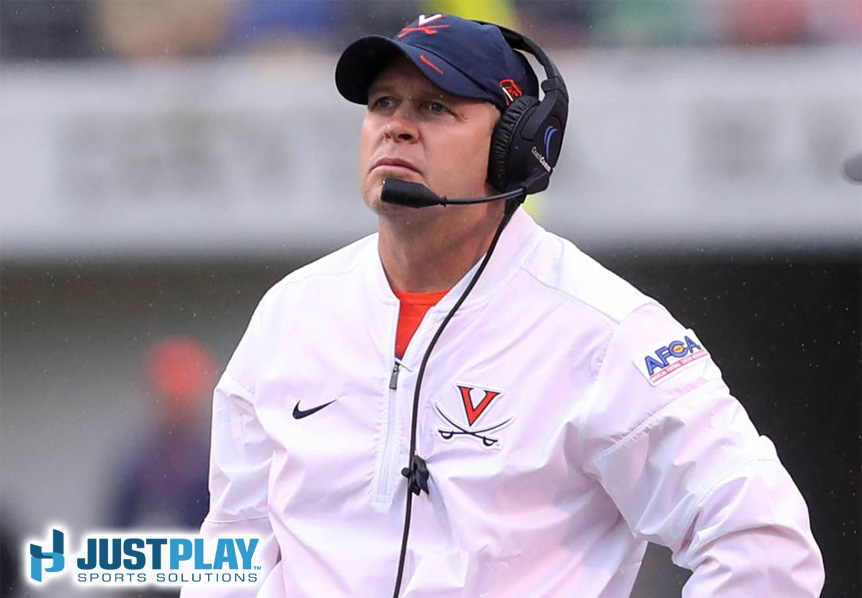 If you ask any defensive player who played under Coach Bronco Mendenhall — as I have — that player will have a story to tell of “pursuits.”

Our pursuit drill at Virginia is probably very similar to most. The defense lines up and takes proper pursuit angles to a player acting as a ball carrier.

In our defense, the pursuit drill takes on an entire new meaning. Everything must be done exactly right by all 11 players from the start to
the finish. If one player does not do it exactly right, the entire group goes again.

The drill starts with the first-team defense lining up on the sideline. (See Diagram 1) 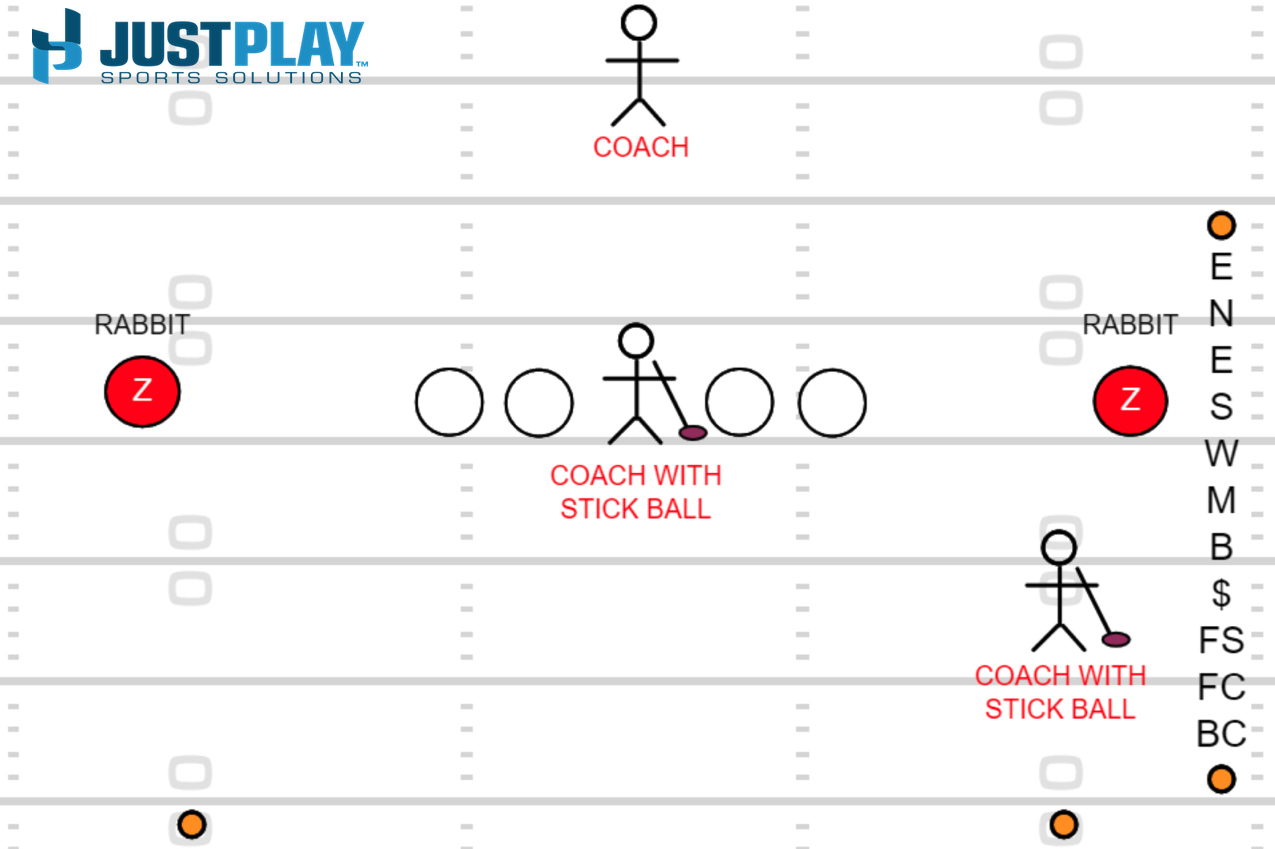 The players line up shoulder-to-shoulder, 3 yards from the sideline. One of the coaches gives the command to “walk up.” The players are expected to walk
up together at the exact same pace and time. Over time, players have learned to hold hands so that they can stay together. Once they reach the sideline, the coach gives the next command, “Down!” The player’s hands fire to the ground in unison. All hands must go down together behind the line.

The coach begins then to bark out signals trying to get the players to jump offsides. All eyes should be fixed upon the ball that the coach controls. As soon as the ball twitches, the players must sprint onto the field as hard as they can. They sprint past their position and then hustle back to their alignment.

Once on the field, the players look to the sideline for the call. The call is important because it sets the communication and assignments of each player. It all starts with their alignment and stance. The player must be in the right stance and aligned right where they are supposed to be.

At this point, there is another ball on a stick with a coach barking out signals. The players must stay disciplined and react as soon as the ball moves. Each play starts with a run action to either the field or the boundary. The defense reacts to the flow by working their technique and shuffling in that direction.

A few steps into the play, the quarterback will boot the other direction and simulate a pass to a player acting as the rabbit for the defense to chase. Part of the chase is ensuring the defenders take a proper angle to make a play and run as hard as they possibly can. Once the defenders reach the rabbit, they tag off on the ball carrier, do an up-down and then finish through the cone, which is 30 yards down the field on the bottom of the numbers.

The drill finishes once the entire defense has made it all the way off the field. Players will often end up 40 to 50 yards downfield as they are taking a proper angle on the rabbit. (See Diagram 2) 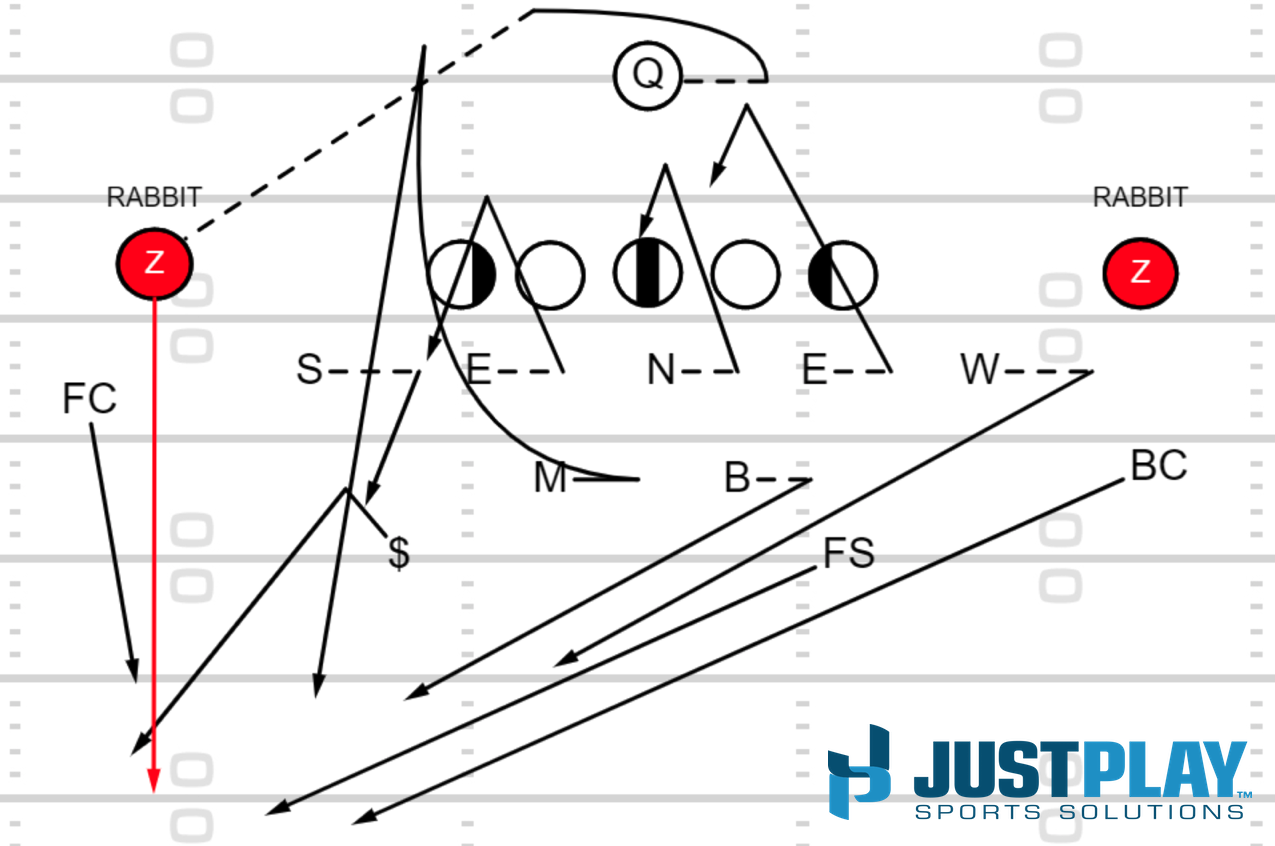 As a player, this is when your entire world can come crashing down in a matter of seconds. As the players exit the field at full speed, the first thing they will do is flip around and look at the coaches. Each player is hoping and praying that they will see good news. Each coach gives a thumbs-up or thumbs-down.

As a coach, I am watching my position group as I participate in the drill. If any of my position group — or any other player — is not doing the drill exactly right, I give a thumbs-down. Upon seeing the thumbs-down, the players are heartbroken. On a thumbs-down, the player who made the mistake is called out and informed of what he did wrong. When the players see thumbs-up from the coaching staff, they burst into celebration. This gives them immediate feedback as well as an opportunity to fix their mistake. Anything and everything is fair game to be called out. As a player, this holds you accountable to your coaches, but more importantly to your teammates.

The Point Of Pursuits Drills

The entire drill is based upon two things: effort and discipline. Each player must perform his given assignment with as much effort as he possibly can muster for the group to get off the field. They are expected to do this while having perfect pad level and footwork. The whole drill, from the start to finish, needs to be perfect.

The drill can go on and on until the goal for the day has been met. It could be that each unit needs to get only one or two perfect reps for the defense to be able to move on. In order to move on to the next period in practice, the defense must finish the drill. It is not based on time, but instead on accomplishing the task. Once the task is completed, the players earn their way to the next period and the opportunity to play football.

Many may view this as a simple drill, but in our defense, we have a different philosophy. In order for a player to meet his potential on the field, he first must be committed, and then learn how to try as hard as he possibly can. It is incredibly rare to find someone who gives 100 percent effort on any given play. When we see a player going as hard as he can, we celebrate that and show it repeatedly to reinforce the behavior. We believe that players can accomplish so much more than they believe they can. Pushing each to his limit allows a player to truly understand what he is capable of and unlocks his potential. As players push themselves to do more each day, they begin to expand their work capacity and become greater than they thought possible.

The benefits of this pursuit drill can be seen on gamedays. Two years at Miami, the Hurricanes were leading midway through the second quarter when one of their running backs broke off a long run. As he burst into the open field, it looked as if he was well on his way to the end zone. Yet out of seemingly nowhere, our backside corner took the proper angle and tracked him down inside the 20-yard line. Thanks to that herculean effort, our defense was able to hold the offense to a field goal and we ended up winning the game, 16-13. The four points saved by that valiant tackle were the difference in the game. The habit of total effort had been established long before that play though.

If you are going to do something, you should do it to the best of your abilities. This does not always guarantee success, but you learn to keep pushing yourself to find a way to be successful. When we as people learn to put forth our absolute best effort, our accomplishments are limitless, not only on the field, but in life. As we have small and simple successes, it builds our capacity to handle whatever life presents us. That way, long after our players have taken their final snap, they will be successful because they have learned how to accomplish difficult tasks.

This article was written by Shane Hunter, Linebackers Coach, University of Virginia.