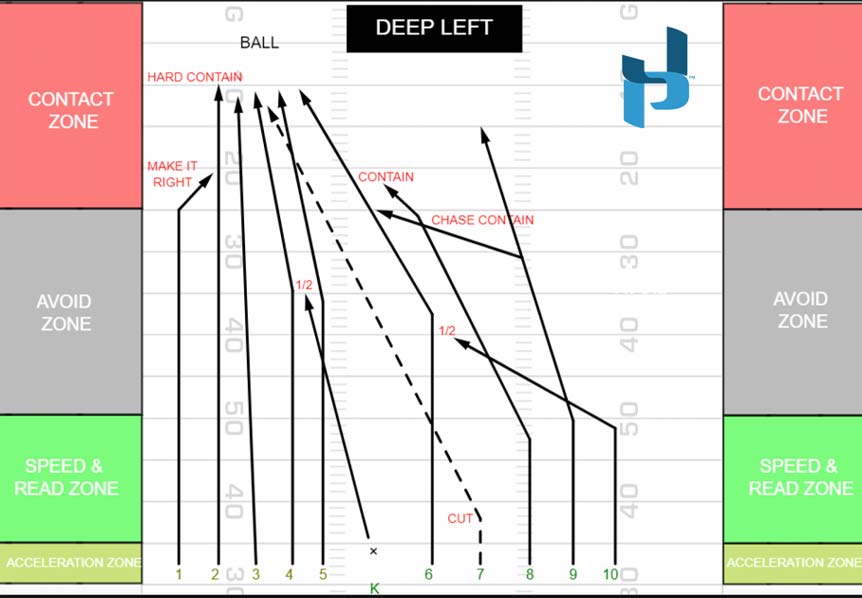 The kick off is the longest, most physically demanding play in the sport of football. It is a field-long blitz by the cover team and requires athletes to sprint at least 60 yards all while escaping blocks and attacking the opponent’s return. Players must be prepared to run for 10 seconds. It is the first defensive play of the series and sets the tempo for the entire team.

The athletes who are on the kickoff team must be explosive, aggressive, physical and sure tacklers with great field vision.

The following expectations define players on the kickoff unit:

Tempo to the ball and consistency are of utmost importance. Kickers need to make accurate kicks and put the ball where instructed. The goal is for the hang time to be 4.1 seconds or better. The kicker needs to count our men and make no mistakes.

The ball is live after it travels 10 yards, whether it hits an opponent or not. It is a fumble if the ball touches the return team. The receiving team can fair-catch a kick that has not touched the ground. We cannot advance a fumble. We must control the ball, stay on our feet and do not go low to take out a blocker.

The contain men must keep all 21 of the other men inside their view, be alert to tricks and never be offside. It’s important to cover so hard that you force a penalty. Never follow the same color jersey; adjust to the next lane.

When we are preparing for a kickoff, the team will meet on the sideline, get the call from the coach, sprint onto the field and huddle. (See Diagram 1) 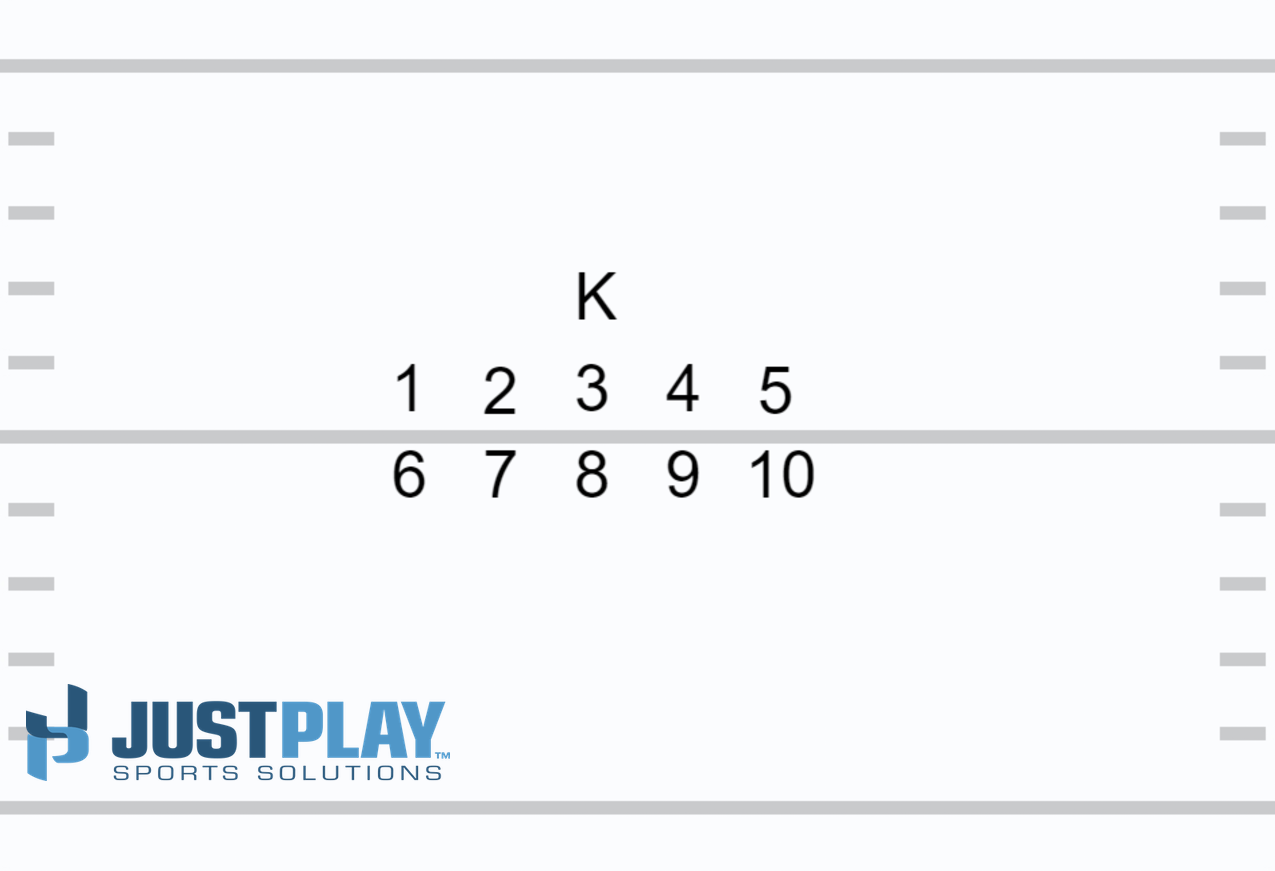 The kicker will tee the ball and then address the on-field huddle with the call. The huddle should face the ball with shoulders square to the line. Positions 1 through 5 will be the front line, and 6 through 10 will be the back line. The kicker will signal that he is ready to kick before he kicks the ball.

Covering a kickoff is a full-speed sprint. When in position, each player should be in a 2-point stance, facing the kicker. We will position the team so that every player has a clear view of the kicker, the ball and the next man in front of him. As the kicker begins his approach, we will employ a waterfall-start technique so that we hit the line at full speed.

See Diagram 2 for a complete understanding of alignment and cover lane responsibilities for the Missile Unit Kickoff. 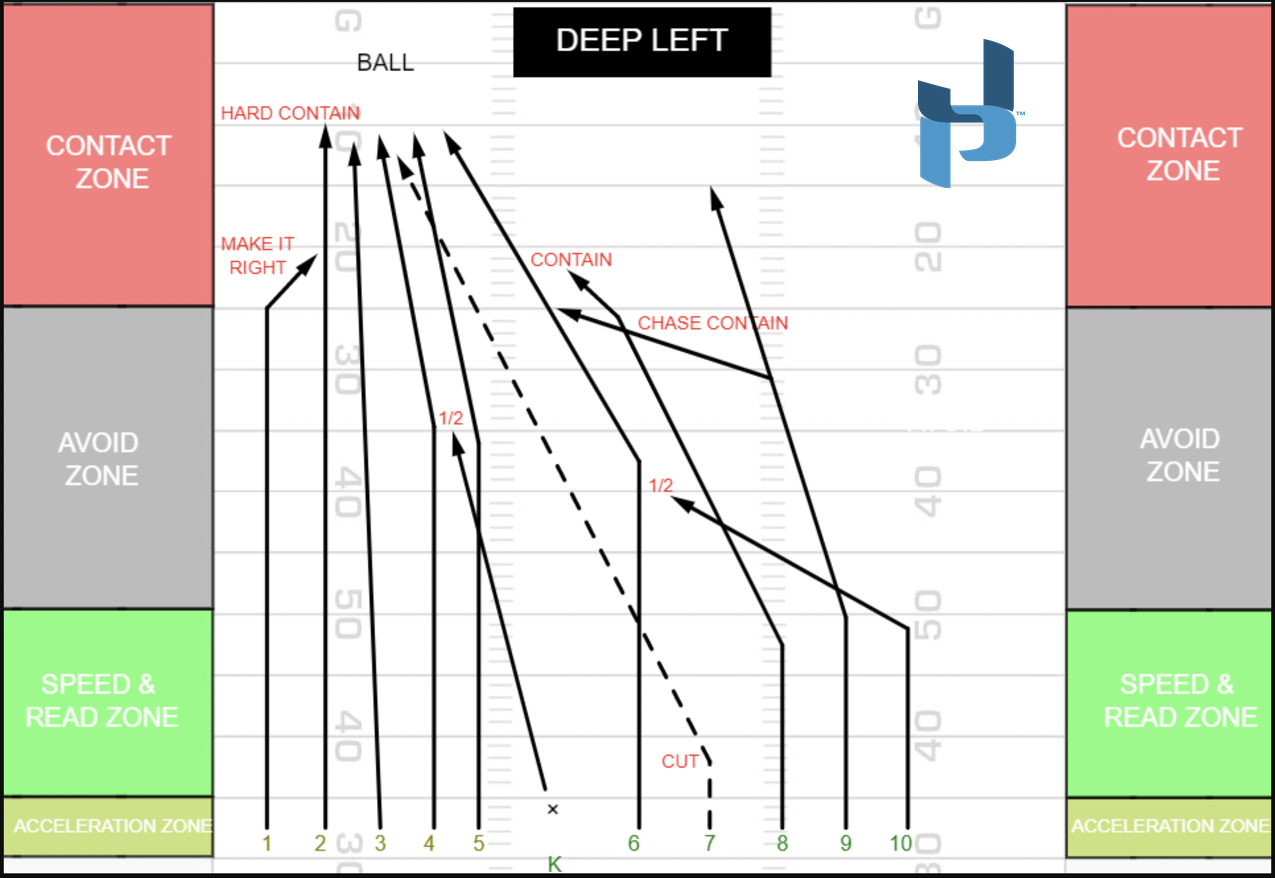 After the ball is kicked, we will keep vertical leverage on the ball. The key element in coverage is to penetrate vertically to the ball and escape to the point of attack. We must continue to gain ground as we constrict the field to limit the options of the returner. If you lose your lane, or get knocked down, get up and fill the next closest lane. Never follow a teammate down field. Always fill the vacant alleys to the ball.

No. 2 takes on the widest blocker on the second level with his inside shoulder and arm, driving him backward and eliminating any “air” between himself and the return. Make the ball go inside of your position and eliminate any outside move up field.

No. 2 takes on the widest blocker with his outside shoulder and gets up-field, making the ball bounce deep to get around him. No. 1 will contain the deep bounce. If you have a shot to make the play take it.

No. 8 keeps 21 men inside of his view. He closes the gap by reducing the open grass between him and the edge of the return (“Trim the Fat”). He must keep everyone on his inside shoulder and make sure the ball is inside and deeper than his position. If he has a clear opening, he should make the tackle. If the ball moves up-field, he must retrace his steps and keep the ball inside.

No. 9 reads and responds to No. 8. If everyone is inside of him and the ball is running away, he folds inside and works at linebacker depth, finding a lane to fill. If the ball comes toward him, he makes whatever No. 8 does right. He fills where needed as contain, inside fill, or he plays the bounce.

No. 1 reads and responds to the No. 2. If the ball is inside No. 2 after he hits the outside man, he folds behind and fills the first open lane he comes to. If the ball is stacked behind or outside the block on No. 2, he slows to fill and plays the bounce. He is a “fill linebacker.”

If the return comes at No. 7, he fills his lane and keeps the ball on his inside shoulder, squeezing as he goes. He must not let the ball cross his face. If he is the first man to a wedge, he hits the first gap to his side. If he is second, he hits the outside shoulder of the first man to his side. If the ball is running away, he cuts across the field, keeping his near shoulder leverage and protecting against cutback. If he sees the ball in an open lane, he hits the hole and makes the tackle. You are the cutter and have freedom to roam and make the play.

Nos. 3, 4, 5 and 6 are the Hammer. He must fill his cover lane and maintain his shoulder leverage based on the location of the ball. He must never let a ball cross his face and use his speed to gain vertical penetration and squeeze to the ball as he gets down the field. He attacks the inner gaps in a wedge that comes toward him. He must drive late blocks into the return and be physical.

No. 10 is a field safety and keeps the ball on his inside shoulder, staying 15-18 yards behind his teammates. He must force the ball to run to the sideline and never let the ball cross his face. The Kicker is the boundary safety, and stays on top of the ball at a depth of 20-22 yards. If the ball gets outside the numbers, the kicker must keep it on his outside shoulder and force the runner out of bounds. If the ball breaks inside, the kicker keeps the ball on his inside shoulder and herds the ball to the No. 10 (field safety). For anyone playing inside and front, lane width is constantly changing and will depend upon vertical depth from the ball. Everyone must contain; no one can let the ball cross his face unless he is in a Spill.

Our goal is for everyone to have one foot within 1 yard of the line as the ball is kicked. Our start should look like the finish of a 100-meter dash. Everyone must strain.

Each player’s weight should be on his front foot and the player must roll over that foot to start his sprint. He must take off at a full sprint and get his eyes up, using timing to avoid looking at the kicker once he starts. Each player picks up the flight of the ball off the tee, reinforcing depth and direction, then adjusting. Remember, being late to the line is better than being offside.