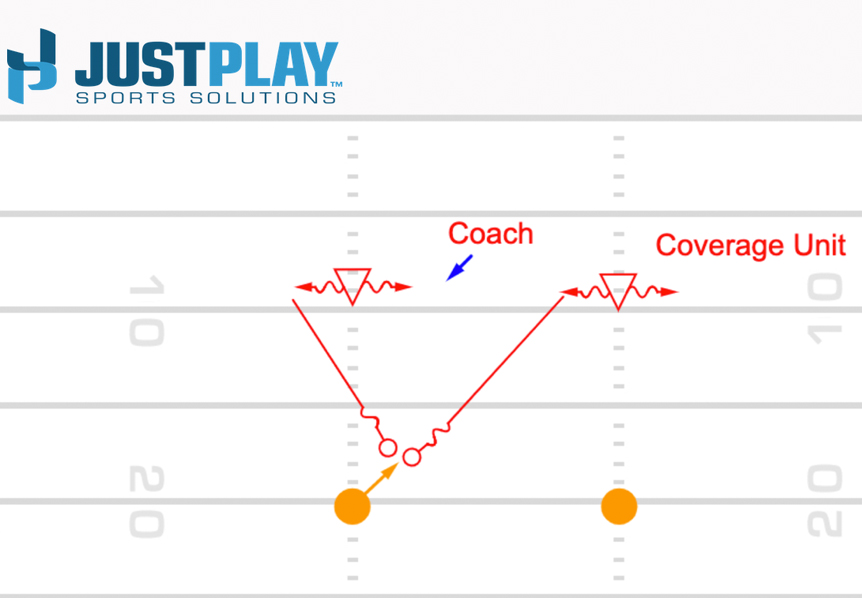 Special teams units have a direct correlation with field position, which leads to points, and in turn wins and losses. Most programs claim to put an emphasis on special teams, but to be successful, it takes more than emphasis. It takes investment.

Often, it is not that a wide receiver or running back can’t make a tackle, disrupt a block, or leverage the football. It is a lack of belief in their tools to do so. Rather than covering punts and kickoffs all practice, the advantage can be gained using a five-minute block for a special teams fundamental circuit. Twice a week, we split our special teams roster up into four groups, and spend 1 minute, 15 seconds per station working on some form of tackling, block disruption, or leverage (one category will be used twice).

With it being a circuit, each station will have multiple players getting reps at the same time. Our goal is to create gameday situations, limit physical contact, and limit the load on our players’ legs. 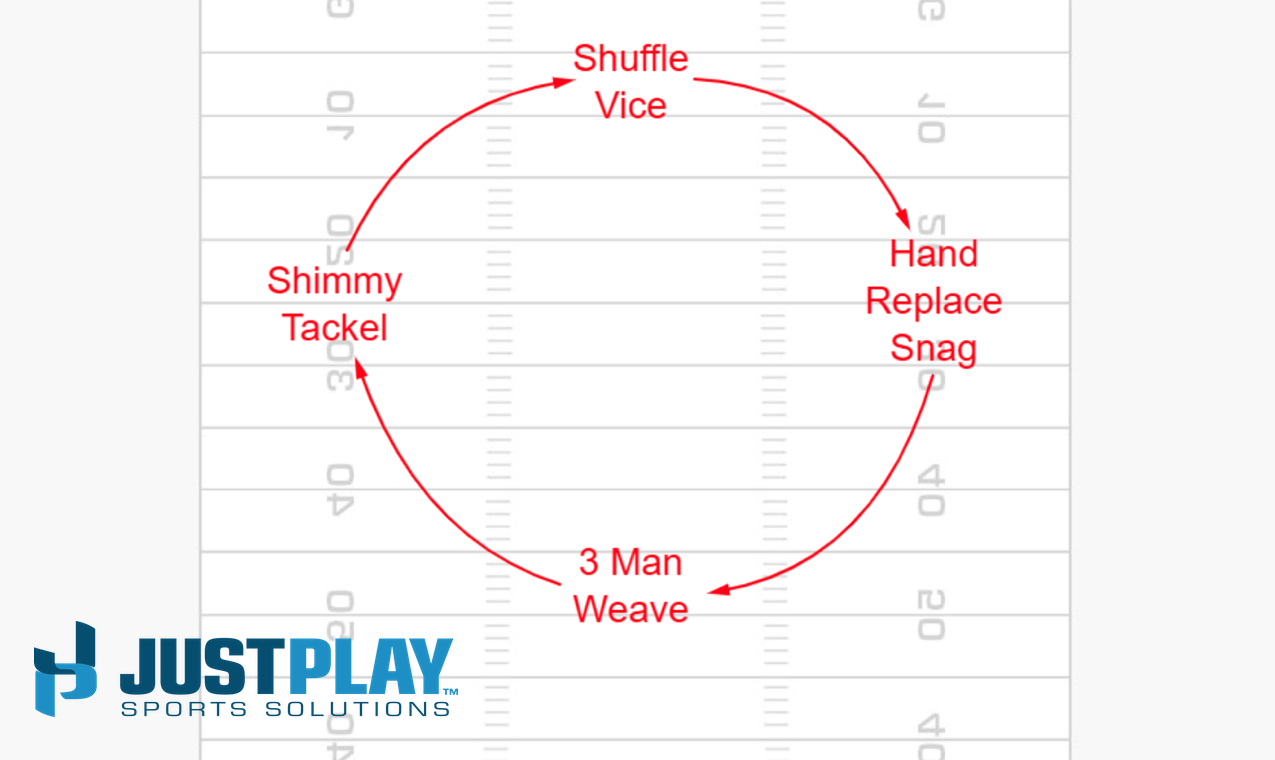 A key element of being an elite coverage unit is the ability to shed blockers and get to the ball. To win on a blocker we must have lower pad level, a power foot in the ground, and inside hand placement. Often, we miss with our hands, which puts us at a disadvantage when trying to shed the blocker. Even if we miss with our hands early, we still have an opportunity to replace and win inside vs. the blocker. This is a technique that applies to all positions on the football field. Wide Receivers and running backs need inside hand placement to win on blocks, linebackers and defensive backs need inside hand placement to win vs. blocks.

A key coaching point when talking about hand placement is to have tight elbows and thumbs up. On the second whistle, the coverage unit side will extend their arms, and snag their man low and away, violently! One common mistake made here is forgetting to extend. Without extension, the return unit will be able to stay in a fitted position and prevent us from shedding the block and making a tackle.

As a coverage unit, the key to eliminating momentum plays on special teams is the ability to tackle in open space. Again, we are using a majority of players who do not have to make open field tackles as a part of their offensive or defensive responsibilities. Special teams tackles are rarely pretty, but our job is to get them on the ground.

In this two whistle drill, three players (5 yards apart) will start between the hash and sideline. On the first whistle, we will sprint at an angle toward the offset ball carrier (stationary — holding a half-round bag). We want to maintain leverage on the ball carrier’s near hip. As we track the near hip we want to shimmy down to handshake distance. We do not stop our feet, as we always want to gain ground on the returner.

On the second whistle, the ball carriers will begin to run at an angle, at which point the defenders will execute a roll tackle on the bag being dragged. As we teach the roll tackle, the point of emphasis is to drive the near shoulder through the thigh board and roll to leverage. One common mistake made in this drill is the misunderstanding of what handshake distance means. Often, players launch through the thigh board too early. The best way to coach around this is to emphasize “handshake distance plus a step.” (See Diagram 2) 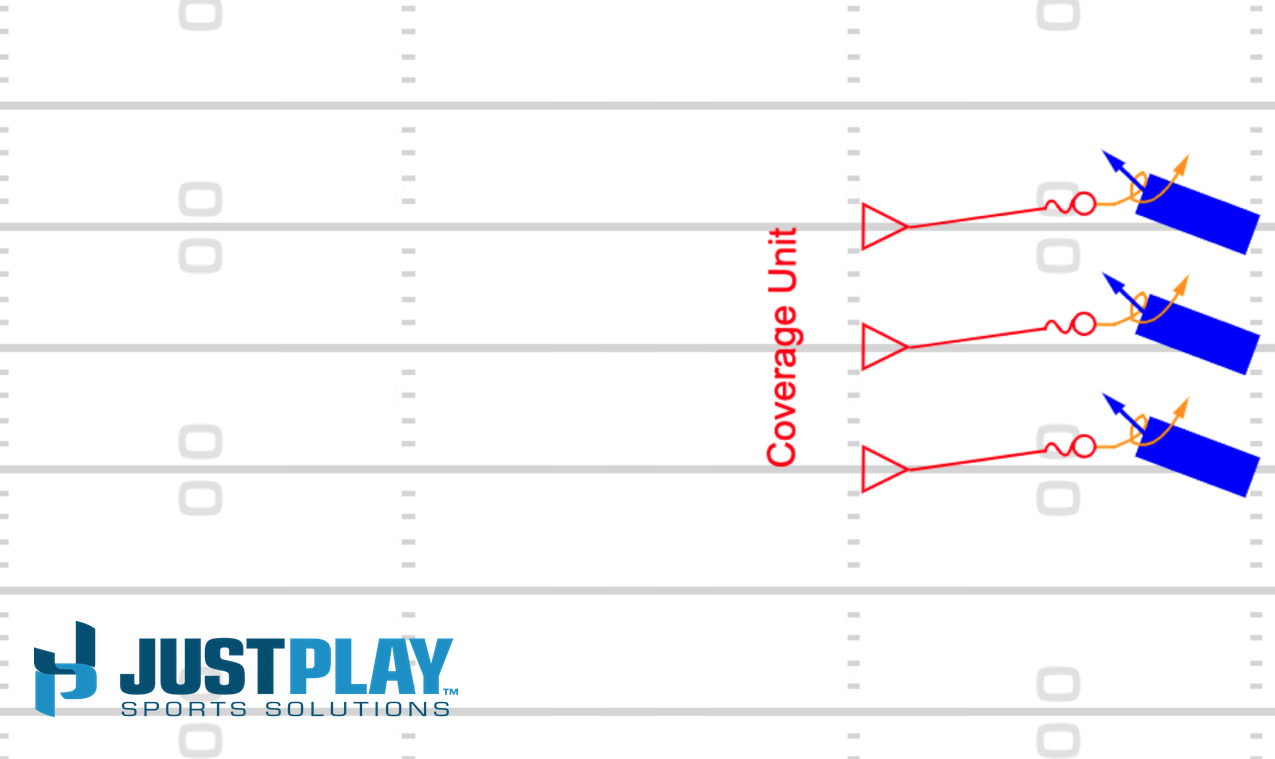 In this particular circuit, we will include two different drills to teach leveraging the football. One of the main ways a coverage unit can allow an explosive play is to mis-leverage the returner. With the exception of defensive backs, no one on the special teams unit has experience taking proper angles and leveraging the ball in space.

There are specific coverage rules that these drills will help reinforce — the first of which being to never follow the same color jersey in coverage. The second rule is to never run past the ball carrier. Lastly, they must remember that leverage means we understand where our help is in coverage.

For leverage drills to be effective, we must execute this drill at gameday speed. If we practice this at 75 percent speed, and go to gameday and play with 100 percent speed, we will not fully understand how and when to properly shimmy down so that we do not run beyond the returner.

On the second whistle, the line returner will take three steps towards the middle of the field. The coverage unit members will have to identify who the live returner is, and vice (taking the air out between the coverage and the returner, keeping leverage on the near hip to the side of the coverage) the football.

This drill is a great way to teach coverage team members where their help is, and how to use it. The key coaching points in this drill are to get to the outside number of the returner to your side, shimmy down, never stopping the feet, and keep your outside arm and leg free. In doing so, we are able to vice the football outside in from either side. We must gain ground and squeeze the returner and force him to go east and west. If the returner chooses to get vertical, we will have him viced. (See Diagram 3) 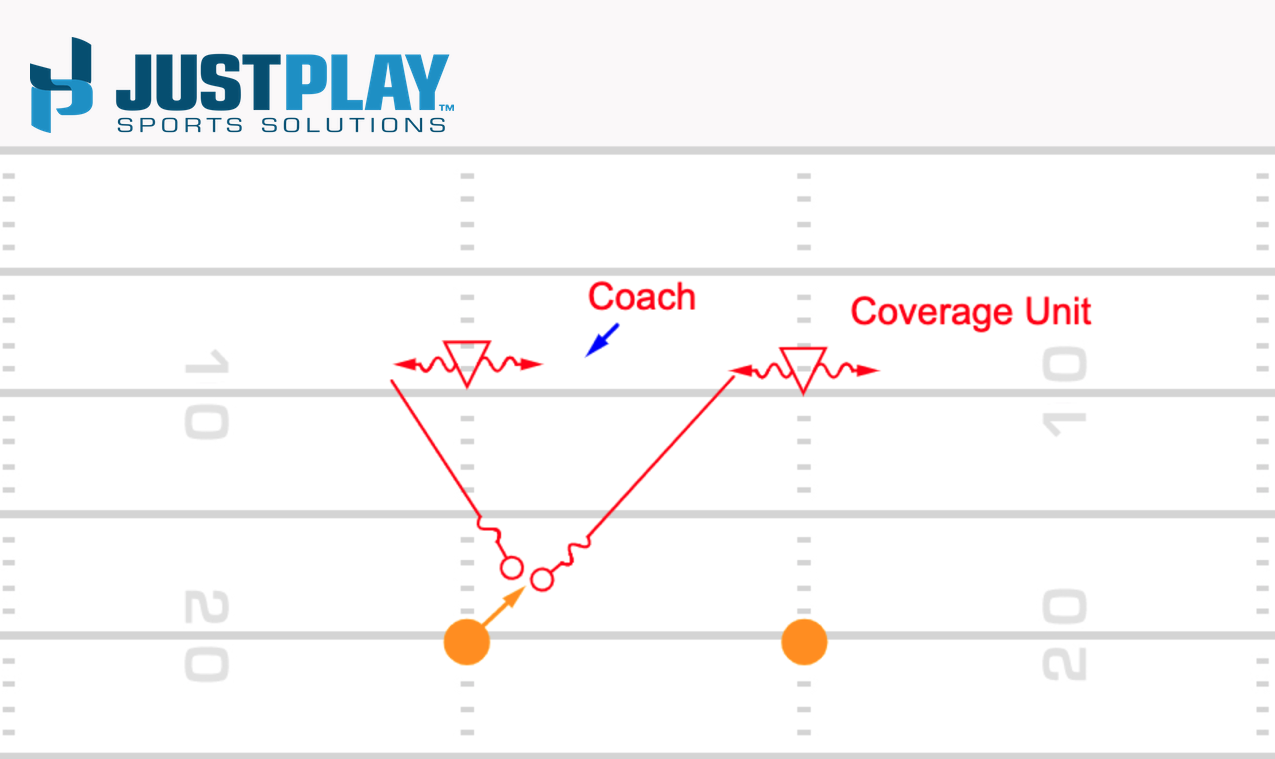 Three players will start stacked, 20 yards away from the returner. We set up 3 cones to represent coverage lanes. On the whistle, the ball is thrown to the returner. Player A will make the first decision as to the lane in which he wants to pursue the ball. Player B will decide next, and player C will go to the only open remaining lane.

The returner will catch the ball and go either right or left. The player in the middle lane will shimmy down and front the ball up. It is key that he does not stop his feet and continues to gain ground on the returner. The two players in the outside lanes will vice the returner, shimmy down, and track the near hip.

It is crucial the two outside defenders keep their outside arm and leg free because they are force defenders and must rely on the middle-lane runner to make the ball go east and west.

For the drill to properly carry over, we need great effort coming out of the stack. We need to understand the feeling of running as fast as we can and transitioning to a shimmy where we are gaining ground on the returner without running past the ball. (See Diagram 4) 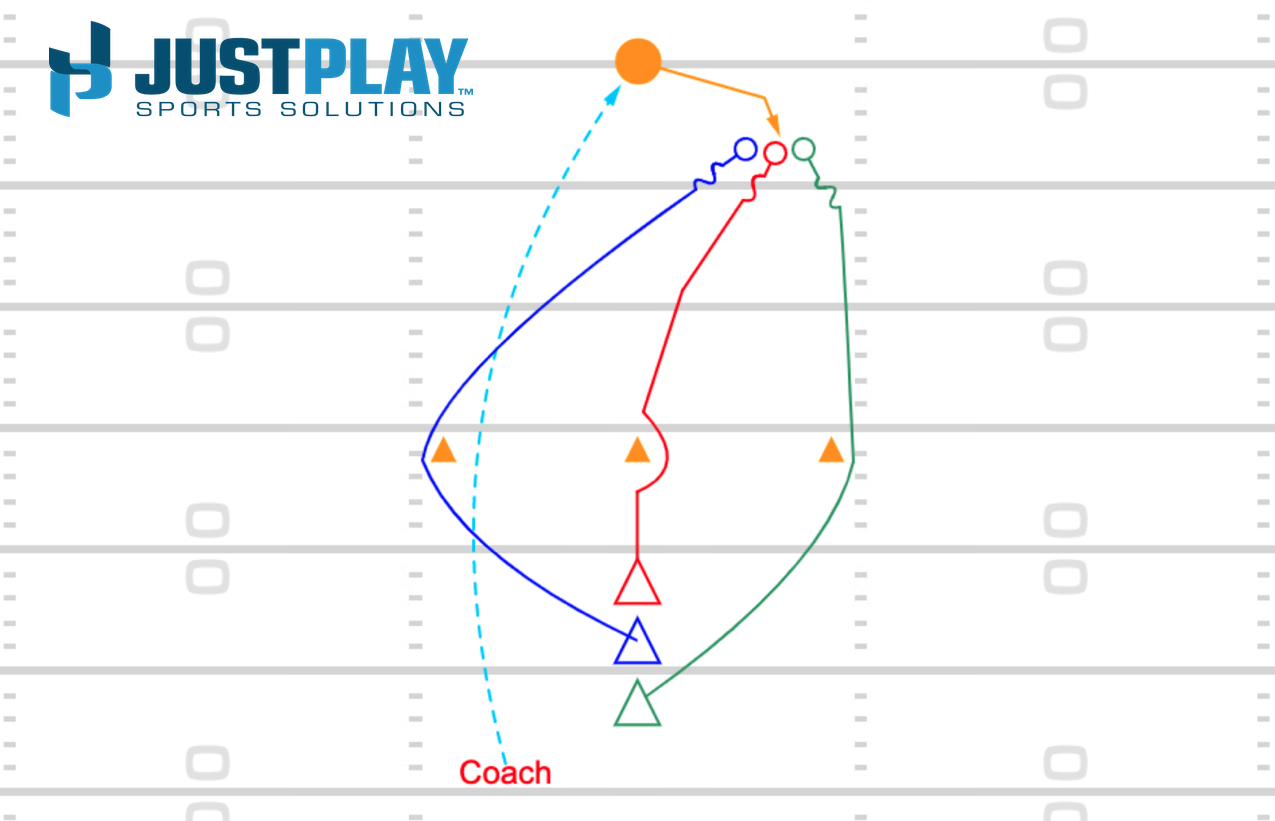