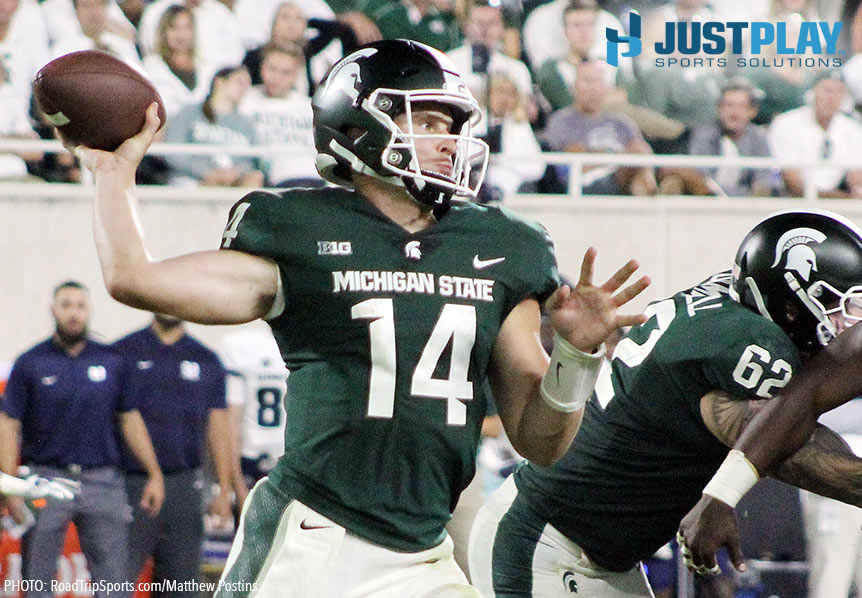 One of my personal favorite progression concepts is what we at Michigan State call the Drive Concept. There are multiple ways to read this specific play, but one of the simpler ways is in a double set.

Drive is a simple triangle read that has been around the game of football for seemingly forever. In it, a team is trying to flood the middle of the defensive zone by putting three offensive players on the opposing team’s two linebackers within the box.

In Diagram 1, this play is illustrated from the offensive left hash in a basic double set (2×2). 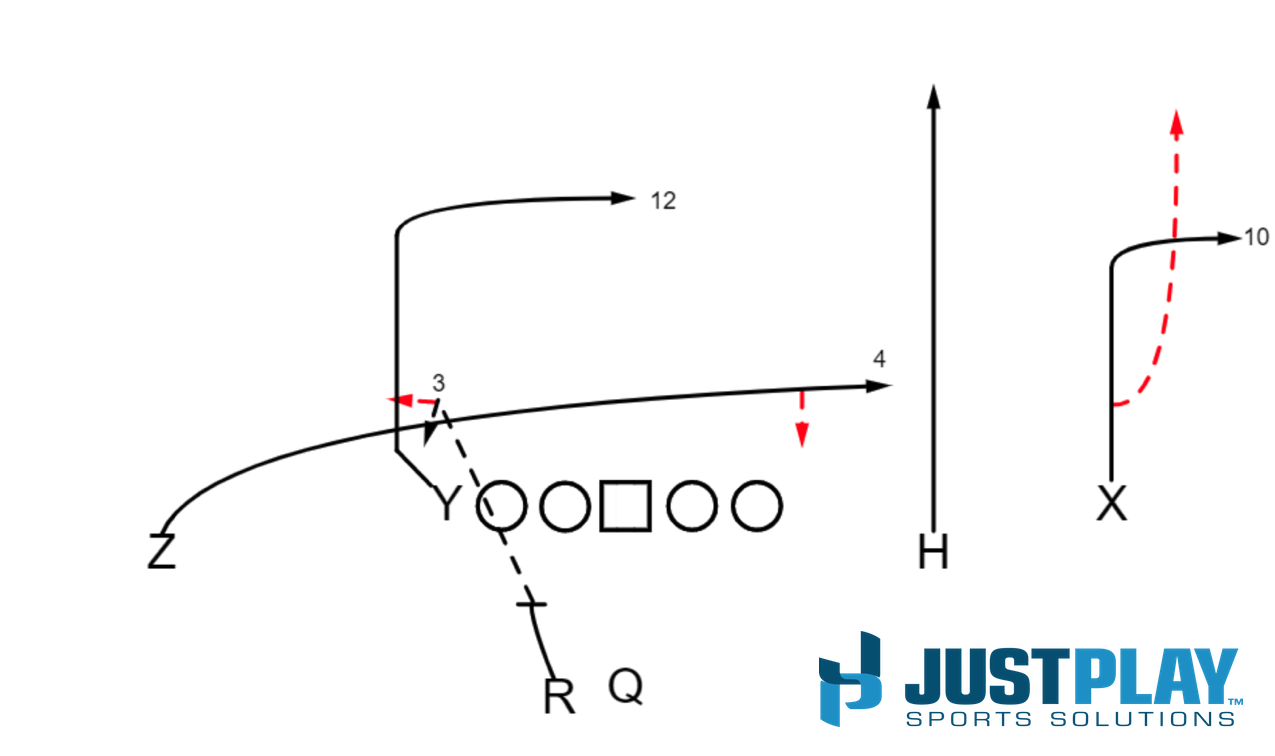 On this play, we tag the player that runs the 4-to-6 yard drag route (“Z” in this example) underneath the linebackers. If the player is matched, we give the wide receiver creative freedom to create separation. If the receiver feels that it is zone coverage and a defender vacates in front of him, he has the option to show the quarterback his numbers no earlier than the opposite tackle box.

Meanwhile, the No. 2 wide receiver to the boundary (Y) will run a Gain 2, 12-yard dig. In gaining 2 yards, we attempt to create a natural rub for the Z to help vs. man coverage. Against man, we want the Y receiver to push vertically downfield for 12 yards, snapping it to create the separation vs. outside technique. Against inside technique, however, we want the Y to sell the vertical route, getting the linebacker to open up and run with him. The quarterback will throw at the breaking point of the route. Even against zone coverage, we want to keep the dig on the move.

While this is happening, the running back turns out in what we call a 3×1, which takes place 1 yard outside the tackle. If the defense is in man, this play gives the back the option to break toward the sideline.

The No. 1 receiver runs a 10-yard speed out route, which converts to a fade if the defense is in a Cloud or Cover 2 formation. Meanwhile, the No. 2 is running his seam route, in which we ask him to release on the outside with the apex defender, trying to get the defender to turn and run with that receiver. Regardless, the seam route is not part of the progression.

The quarterback kicks off the Drive play with a five-step drop. However, the first read is looking to the X (out route), and if the quarterback likes what he sees, he gets the ball out quickly via a three-step drop. Again, this is the progression read. If this option is open, the quarterback should execute it every time.

If the quarterback rules out this option either pre-snap or during his drop, he progresses to the five-step drop with an eye toward the Z (drag route). Against man defense, the seam route will have hopefully pulled the apex defender with him, leaving the Z with space to win his one-one-one. If the defense is in zone, the receiver has the chance to sit on the route no earlier than the opposite tackle box. If that option isn’t available, he progresses to the dig route. This should naturally flow into the quarterback’s vision.

Finally, if all else fails, the quarterback can always check down to the running back, who runs a winner route. We want to instill within the quarterback that there is nothing wrong with this option if everything else is covered. Similar to a point guard in basketball, the quarterback’s job is to distribute the football while taking care of it, and if he checks down, great. 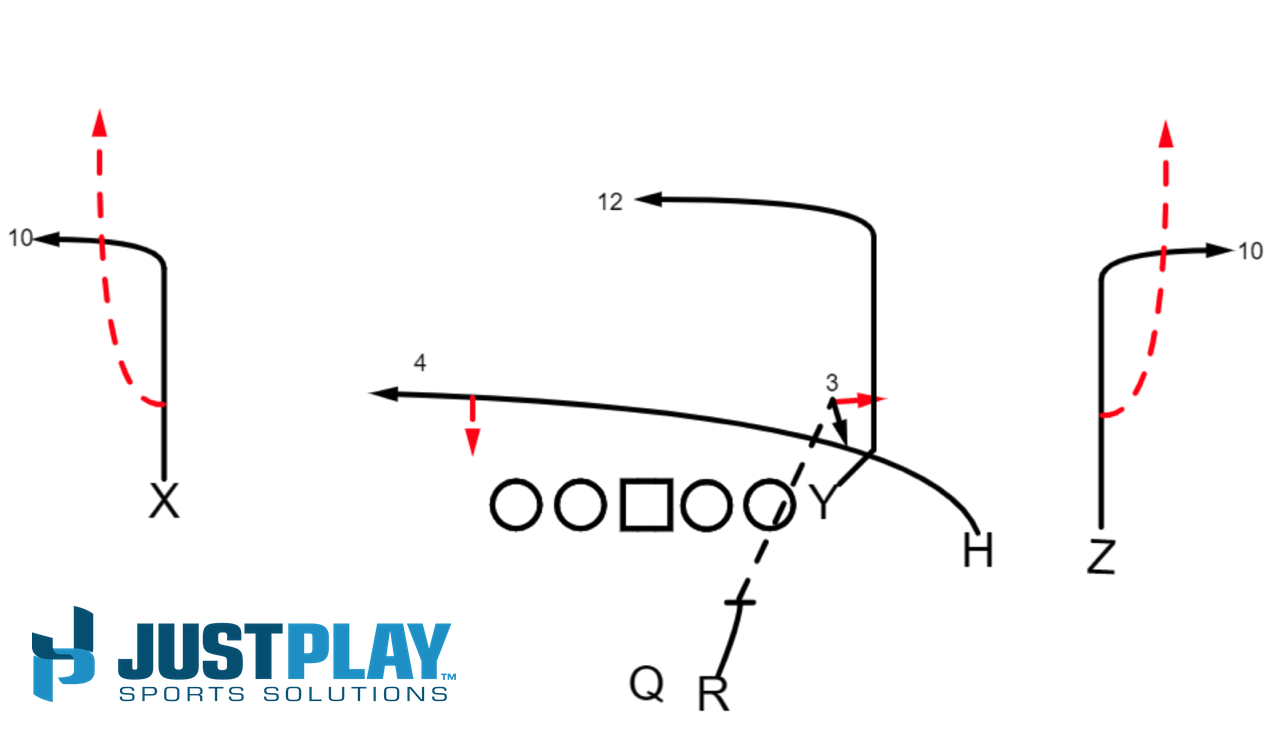 In this instance, we would again tag the wide receiver to run the drag route, but the difference in the 3×1 setting would be running a 10-yard speed out route to the side of the drag. In order to complete this, we would simply alert the “Z” receiver before the snap. If that quarterback feels he has the opening to make the easy completion, a quick three-step drop would suffice, allowing him to rip it to the receiver. However, if there is any doubt, the quarterback should just go through his normal progression read.

The progression is identical for the quarterback in 3×1 as it was in 2×2.

Let me reiterate, this is a progression read. If the quarterback rules out the initial read pre-snap or during his drop, he will progress to a five-step drop and look for the H running the drag route. Against man, this can create separation and while in zone, he will have the option to sit down.

That said, the presentation may look a little different from before. Instead of reading a nickel back or a linebacker, the quarterback generally works off the Will, a roll-down safety or a cornerback. If the quarterback doesn’t like what he sees, the next read is the Y, or the dig route. Just like before, this should naturally flow into the quarterback’s vision and if all else fails, checking down to the running back is always an option.

As mentioned, the idea is to create multiple, simplified presentations that are the same for the quarterback. There are several variations we could also create off of this set depending on our personnel, but the core of this play remains intact. All the quarterback needs to remember is that whether it is in 2×2 or 3×1, there are no limits to the shifts and motions that we can add to this play in order to disguise it and confuse the defense.

One of the things I enjoy most about this concept is that it always comes back to the quarterback’s vision. A way to maximize this is to tag it on the backside, creating an outlet for the quarterback. That can simply be done by putting what we call a Crush on the front side.

We purposely place the X on a Lose 4, Corner. In this wrinkle, we want to lose on the inside, but work vertically 12-18 yards. No matter what, we believe the quarterback should always be able to throw the receiver into the open field. The H runs a 5-yard flat, peeking outside to look for press coverage. If he sees it, he will foot-fire toward the line of scrimmage to buy time for the flat to clear out.

On the backside, we tag the Z-Drive concept that we talked about above in which all the same rules apply. The Z runs the drag route and the Y receiver will be on the dig, but in an effort to change it up and provide another presentation of the look, we will move the running back to the opposite side to run a 4-yard burst route. (See Diagram 3) 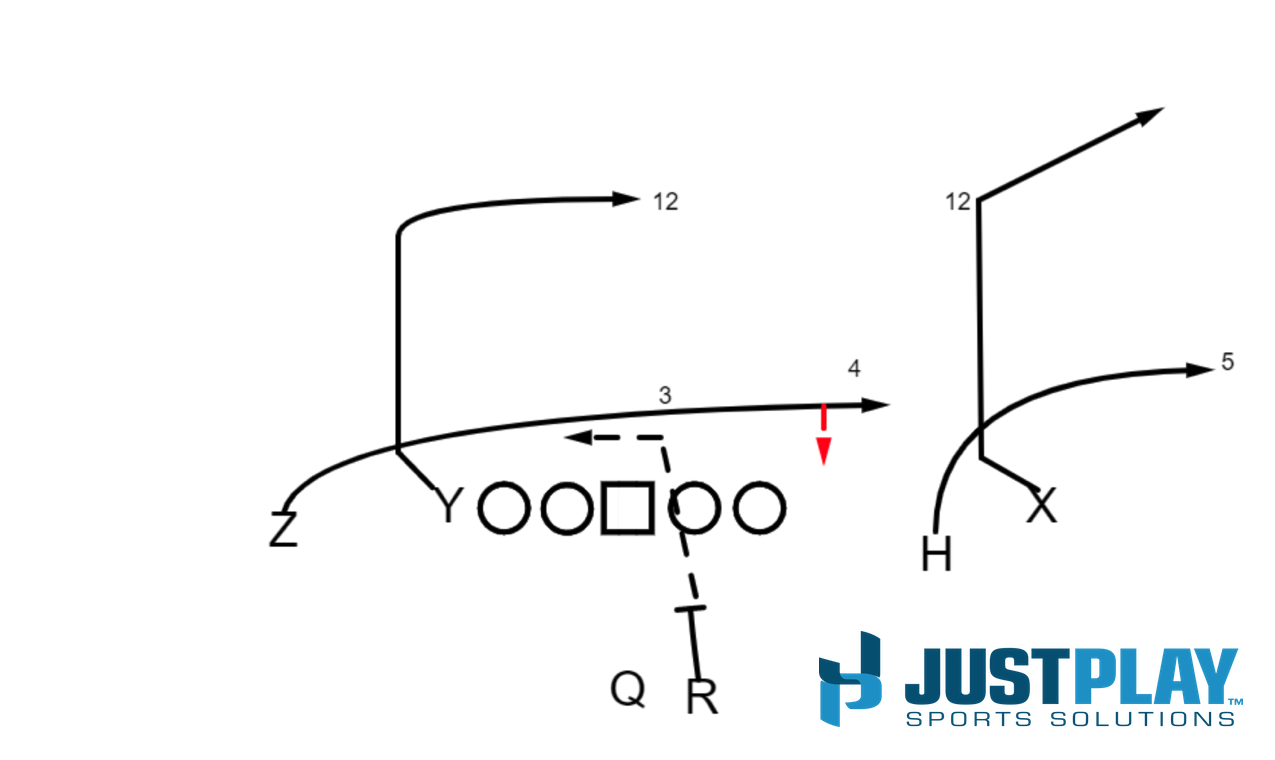 Again, why this play is one of my personal favorites is because we are always starting the quarterback away from the Drive tag. Here, we will take a smooth three-step drop and take the flat route from the H receiver if it is available. The quarterback is never wrong in taking that first option of the progression.

If the defense takes that away, we will reset for the Burst corner. If the Crush concept is also not available, we go back to our Drive progression, meaning the Z still has his drag route and the same conversions will apply to the dig.

Under that scenario, what we have done differently is that we now have to put the running back on a burst route, which is advantageous against man coverage because we can get
a natural rub. Tying it all together, the back ends up in the same spot as he would in a 3×1 set, which again changes nothing for the quarterback.

Putting a different flavor on the same play, let’s stick with the 3×1 formation. (See Diagram 4) 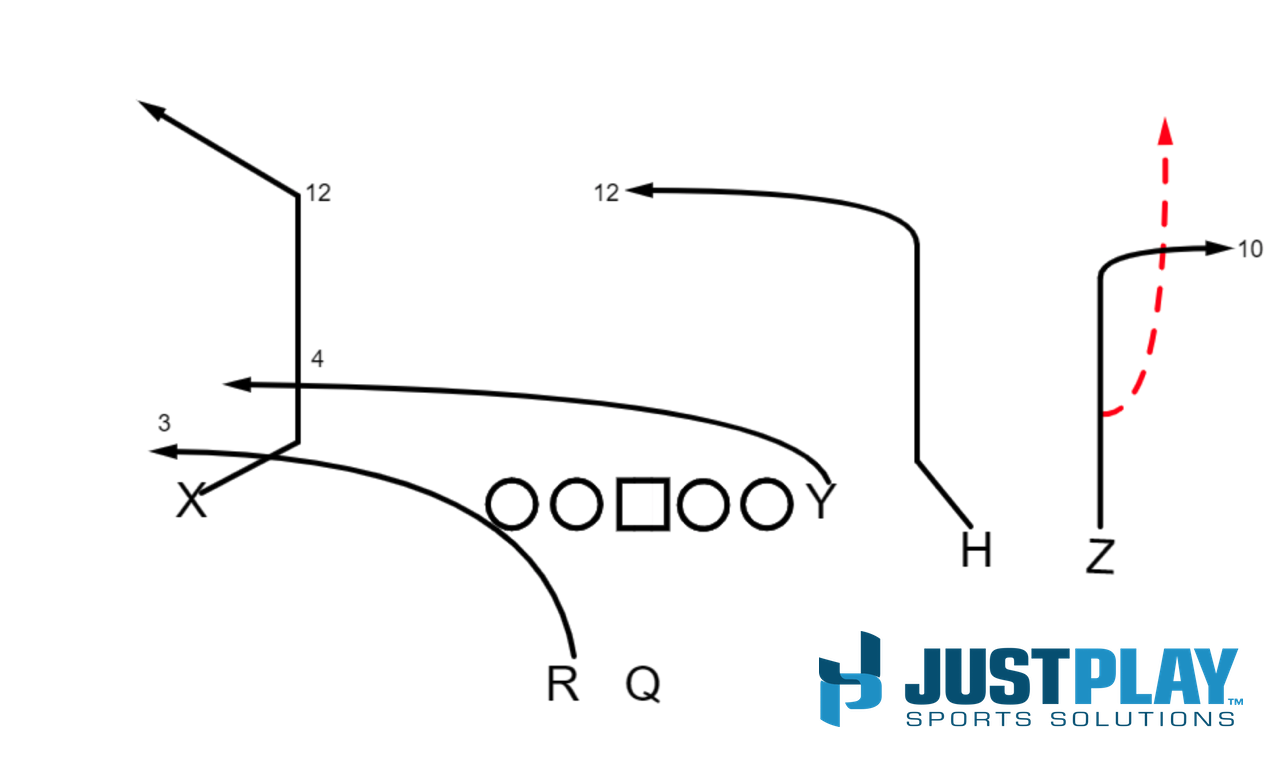 This time, however, we tag the Y, releasing the running back. Here, we still alert the free-access out route to the field, and if it is there, we will take it. On the front side, we include the running back as the first read on the free-release arrow. Just like before, the same rules will apply — if open, take it with a quick three-step drop. If it is taken away by the defense, reset for the Burst Corner.

The quarterback progresses the play to the Drive concept. The Y also operates under the same rules that every drag route has, and because the H is a little wider than the average dig route, he will minus release to keep the same spacing as the previous Drive plays. Again, nothing changes for the quarterback, who works through his progressions as normal.