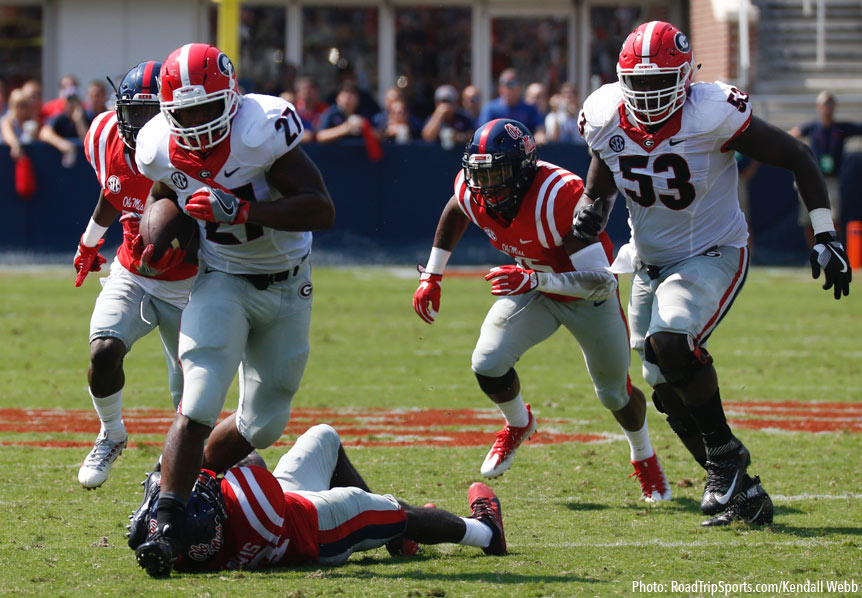 From television to social media, everyone is throwing around the term “RPO,” in many instances, without really knowing what it means. In almost every offense across college football, you can find some version of the run-pass option (RPO). Each has its own way of running an RPO package.

I have been very fortunate to have worked with and for some great football coaches during my career. From offensive coaches like Mark Richt and Mike Bobo to defensive coaches such as Willie Martinez and Chris Rippon to special teams wizard Doc Holliday, these coaches and many more are true football men. They are men who are not only great with X’s & O’s, but also excellent teachers. All have had some level of influence on my coaching career and my beliefs on what it means to be a football coach. However, none has had as great an impact on what I believe in schematically as an offensive coach than Bill Legg.

My time spent at Marshall, under the tutelage of Legg, then the program’s offensive coordinator, was one of the most enjoyable times of my career. I learned at a very young age that coaching is teaching, and that’s where Legg excels. He is a master teacher of one-back offense. From inside/outside zone to play-action pass to run-pass options, Legg is one of the best innovators of spread offense in the country.

In the two seasons that I coached offense with “Billy” at Marshall, our offense ranked 12th and 2nd, respectively, in total offense, averaging more than 500 yards and 42 points per game.

Marshall football has always been synonymous with explosive offensive football. From Chad Pennington and Randy Moss to Byron Leftwich and most recently with Rakeem Cato, there has been no shortage of great players who have thrived putting up points for The Herd over the years.

My time at Marshall and with Legg was no different. We were a true spread offense with four and five eligible receivers flexed that operated at a fast pace. But what really took us to another level was the incorporation of RPOs into our system.

The idea of finding a conflict defender on every play, then actually putting that guy in a run-pass conflict was a simple yet brilliant idea. Not an idea that was created at Marshall or by Legg, because some version of RPOs have been run for a long time now, but one that was refined, simplified and executed in an extremely efficient manner.

I became obsessed with this part of our offense. These plays put us in the ultimate win-win situation offensively. It was double- and triple-option football with a downfield pass, basically new age wishbone football out of spread formations. And what made us different was the simplicity at which we were operating our RPO package.

At Marshall, we couldn’t be too difficult with the schemes that we wanted to install. Because of that, we kept our conflict plays simple, learning was at a minimum and execution was at a maximum, a formula that proved to be very successful in my time with Legg.

At Miami, we carried over the same philosophy that we had at Marshall with respect to the installation and implementation of our RPOs: simplistic multiplicity. We classify our RPOs into three categories. Our first category is “leverage-based RPOs.” These are plays that involve a pre-snap decision by the quarterback solely based on the leverage of the conflict defender in relation to the route that we have tagged to our run. 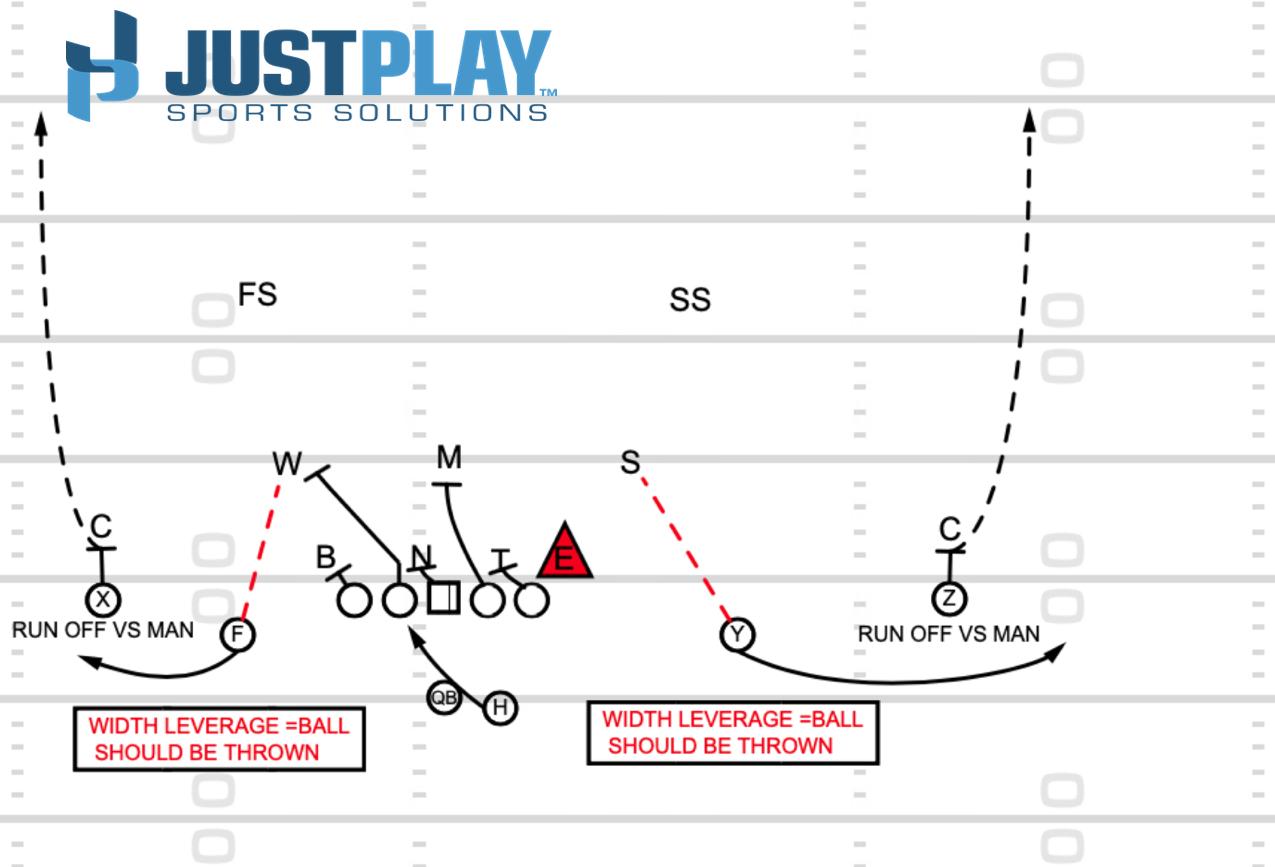 As you can see in Diagram 1, the pre-snap decision for the quarterback is easy. Based off the alignment of the apex linebacker to either side, we have width leverage to throw the football.

We give the outside receivers the ability to run off their defender versus press-man coverage. If it starts as press and the corner then bails to zone coverage on the snap, the receiver must now know to block the corner. 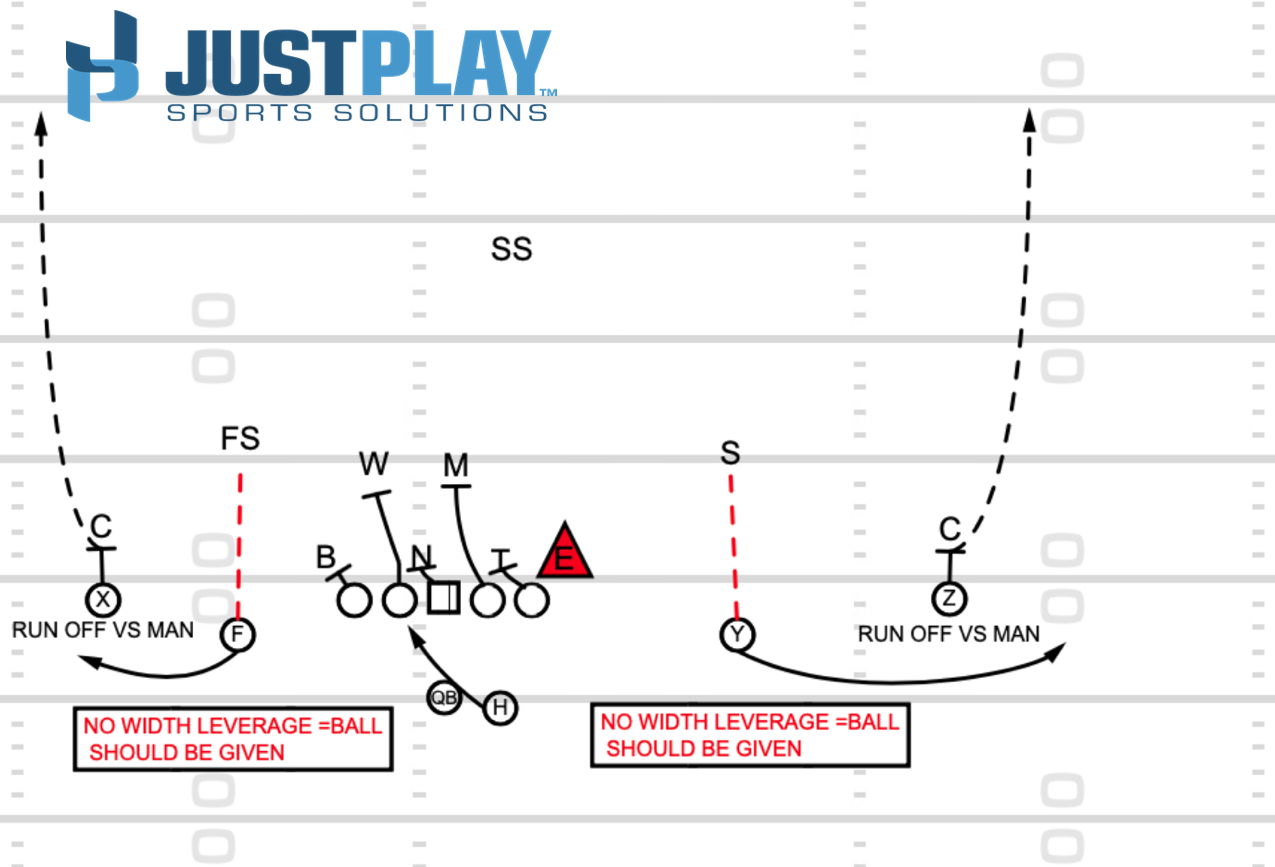 We also use depth to define leverage. The conflict defender may have taken away our width leverage by widening his alignment, but we will also read how much the depth he has in relation to receiver. If he is deep enough, usually 8-10 yards off the ball in his alignment, we think that we have enough depth leverage to throw the ball. If he is tighter than that, usually linebacker level, then we do not have depth or width leverage and the ball cannot be thrown. 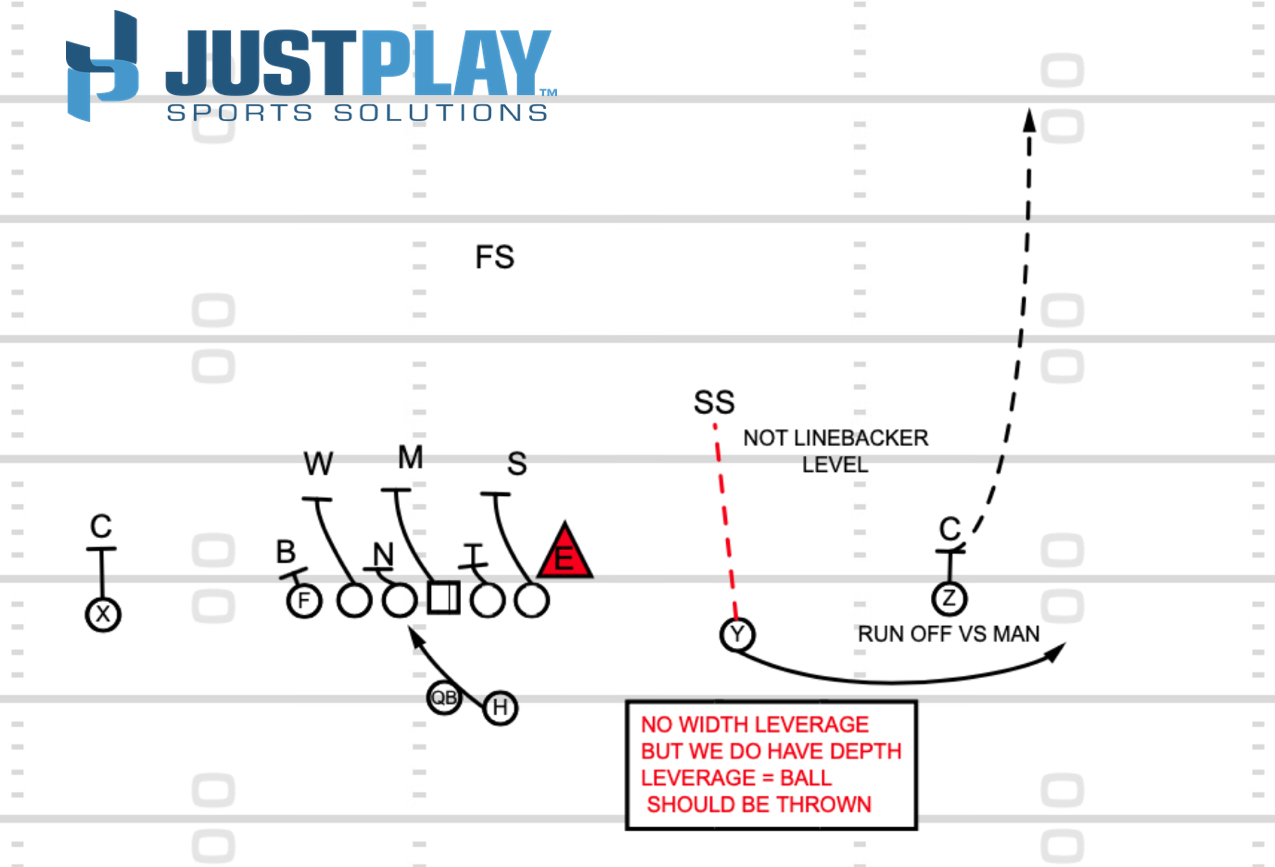 In Diagram 3, you can see the defense has again rotated to a one-high safety look, dropping the strong safety to the field to cover down on our Y receiver. This is a typical response by a defense to our RPO package is to give us one-high safety looks, often times playing man-to-man coverage.

However, we will still look to see if we have leverage pre-snap to throw the ball. You can see that the strong safety has taken away width leverage, but is still 8-10 yards off in his alignment. We consider this enough depth leverage to execute a throw. Because of our tempo and the fact that defenses like to disguise their coverage, we see that even in one-high safety looks, we still have leverage to throw the ball many times.

Usually the routes associated with our leveraged-based RPOs are quick screens, such as bubbles or smokes, which require a block on the perimeter by one or two other offensive players not catching the ball. As a result, we can take reading leverage to another level by reading force (See Diagram 4). 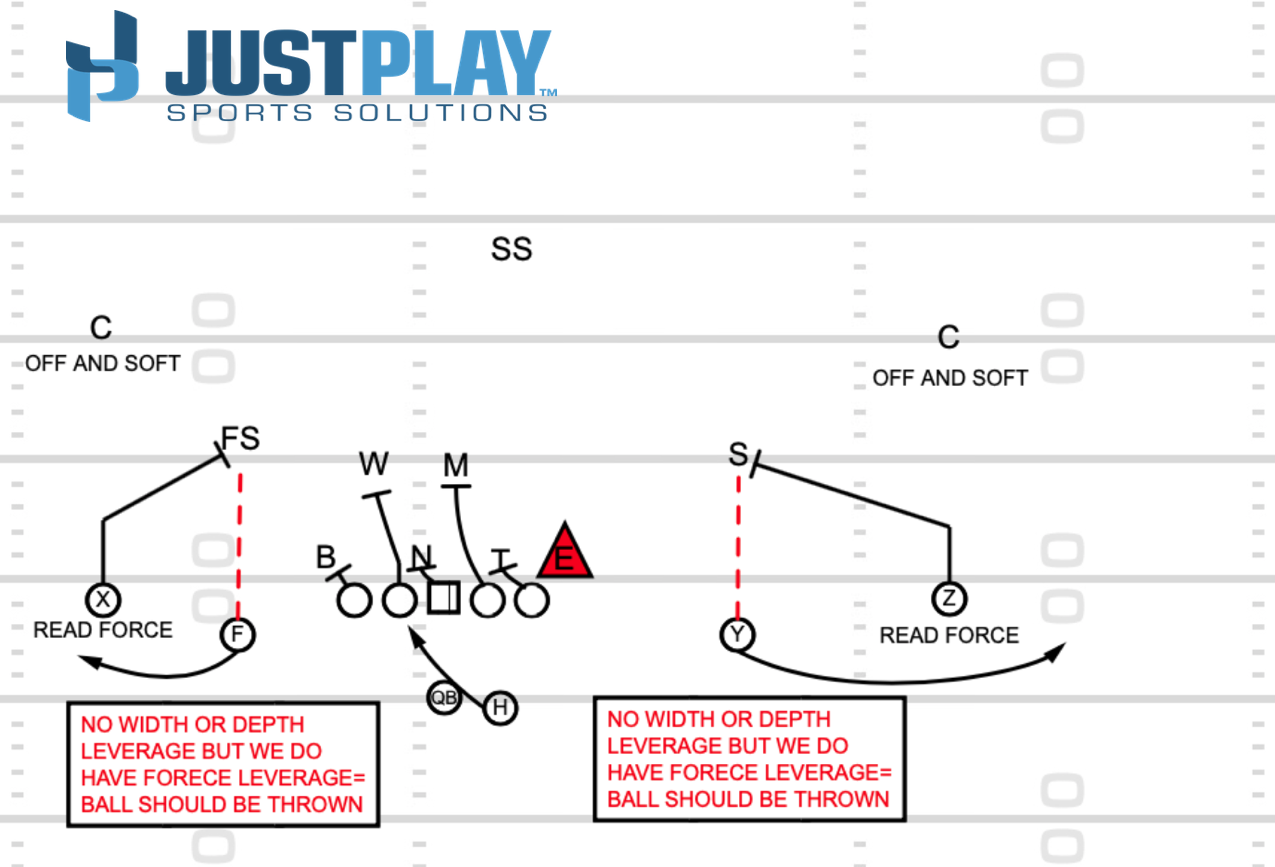 Leverage-based conflict plays are by far the simplest form of RPOs in our game. The decision is pre-snap for the quarterback, making it easier to read, and the routes are short and quick, making them easier to complete. However, as simple as these plays seem, they have by far been our most effective in our offense.

We called our 2×2 spread formation leverage-based RPO off our inside zone 77 times in two seasons at Miami. The play averaged 6.4 yards per call in those 2 seasons. We handed the ball off 43 times for an average of 6.2 yards per carry and we threw the ball 34 times for an average of 6.7 yards per attempt. It was one of our most consistent and explosive plays. It is easy to learn and easy to teach, therefore, easy to practice and easy to execute, and the results are proof of its effectiveness.

Movement-based RPOs are plays that involve a post-snap decision by the quarterback based on the movement of a conflict defender relative to the route we tag to our run.

Since this is a post-snap decision, it has to be made quickly. As a result, setting the parameter for throwing the ball to a “flinch” instead of a certain yardage or distance is what we feel eliminates the gray area for the quarterback, thus making the RPO easier to read. Movement-based RPOs are effective versus two-high and one-high safety looks, and are great complements to our leverage-based conflict plays as well. 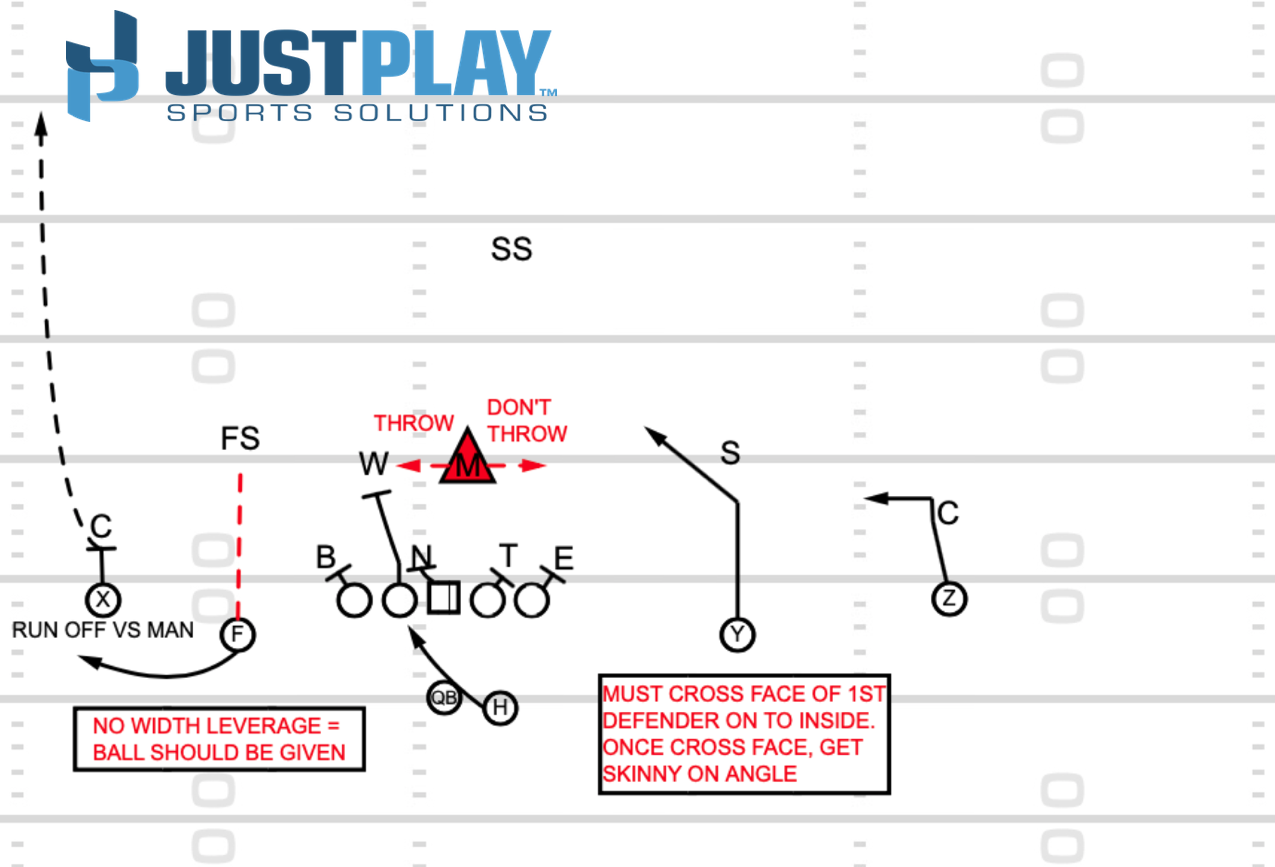 We will, at times, combine a pre-snap, leverage-based RPO with a post-snap, movement-based RPO to give the quarterback multiple options to throw on each play. As you can see in Diagram 5, we have a leverage-based RPO into the boundary and a movement-based RPO to the field. In this example, the quarterback can see pre-snap that we do not have leverage to throw the bubble screen into the boundary. However, we have an optimal look to throw the post-snap lookie route based off our read of the Mike linebacker. Again, if the conflict defender “moves an eyelash” in the direction of the run, the quarterback will pull and throw, looking first to hit the lookie route by our Y receiver to the trail route by our Z receiver.

Movement-based RPOs are more difficult to execute, because the read is post-snap for the quarterback. However, these types of RPOs put the most stress on a conflict defender. He is truly getting a run-pass conflict. We see that most of our explosive plays from RPOs are movement-based in nature.

The third category is numbers-based RPOs. These are plays that involve a pre-snap decision by the quarterback based on the numbers of defenders that are “in the box” to defend a particular run that we have called. The quarterback is responsible for knowing how many defenders each of these RPOs can handle and make a decision whether or not we have a numbers advantage on that play.

However, if at the line of scrimmage the quarterback notices that there are 7 defenders in the box, then we are a numerical disadvantage to hand the ball off and the ball must be thrown.

Many times, one-high safety defenses put us in numerical disadvantages for the run game, but leave one-on-one coverage on our receivers. As a result, most routes that we tag to numbers-based RPOs are designed to beat that type of coverage.

At Marshall and Miami, we loved running one-back power. It can be run different ways and is optimal vs. a six-man box, but it is not very good when the defense puts a seventh defender in the run fit. You have six blockers for seven defenders, thus you have a numerical disadvantage. 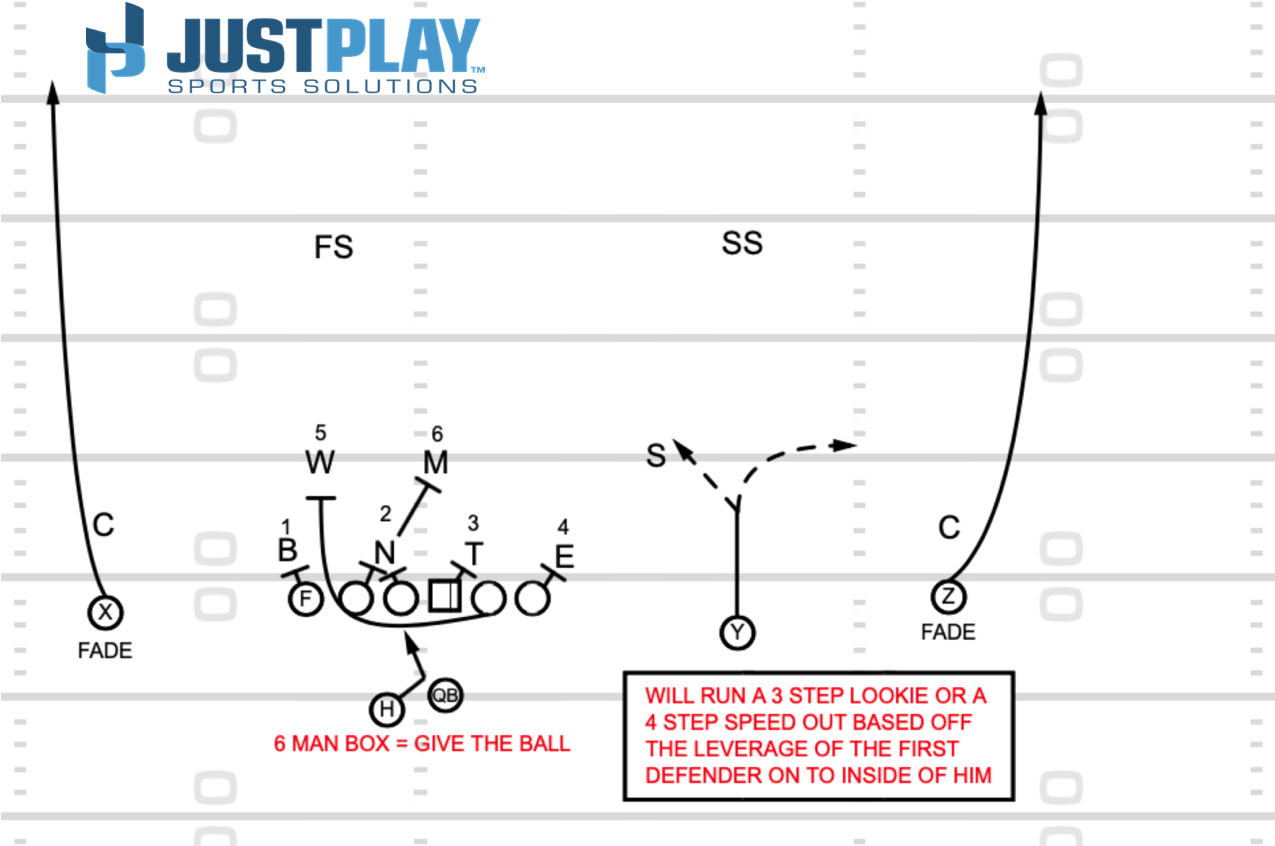 One thing we do is define for the quarterback what “the box” really means. The box for us is defined as any time the defender who puts us at a numerical disadvantage is in a threatening position for the run. In Diagram 6, the seventh defender would be the Sam linebacker or the free safety. In this example, neither of them are in a threatening position to stop our run play, therefore, this is an optimal look to run the football. 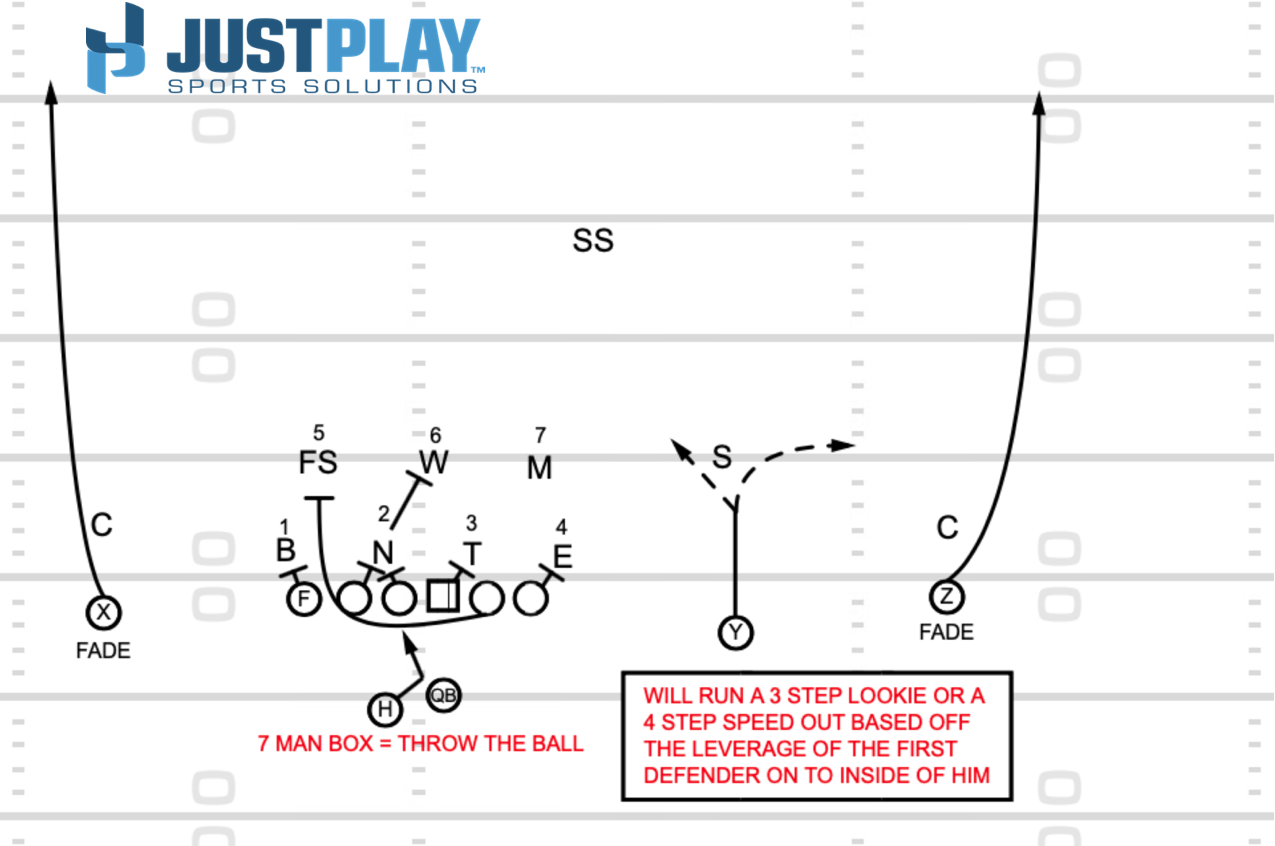 However, as soon as the extra defender is aligned in a threatening position, we count him as “in the box.” The quarterback knows the football has to be thrown.

In Diagram 7, the defense aligned in a one-high safety defense with seven men in the box. They are in man-to-man coverage on the three receivers who are involved in the route tagged to our numbers-based RPO. We give the quarterback freedom at this point to take the best matchup, whether it’s one of the two outside fade routes or the decision route by our slot receiver.

Defenses often give us numerical disadvantages by aligning in one-high safety coverages. While this may not be good for our run game, it leaves one-on-one matchups in our pass game, which we think is good for our offense. Therein lies the beauty of RPOs. No matter how the defense aligns, we should have answers.

This article was written by Todd Hartley, Tight Ends Coach, University of Georgia