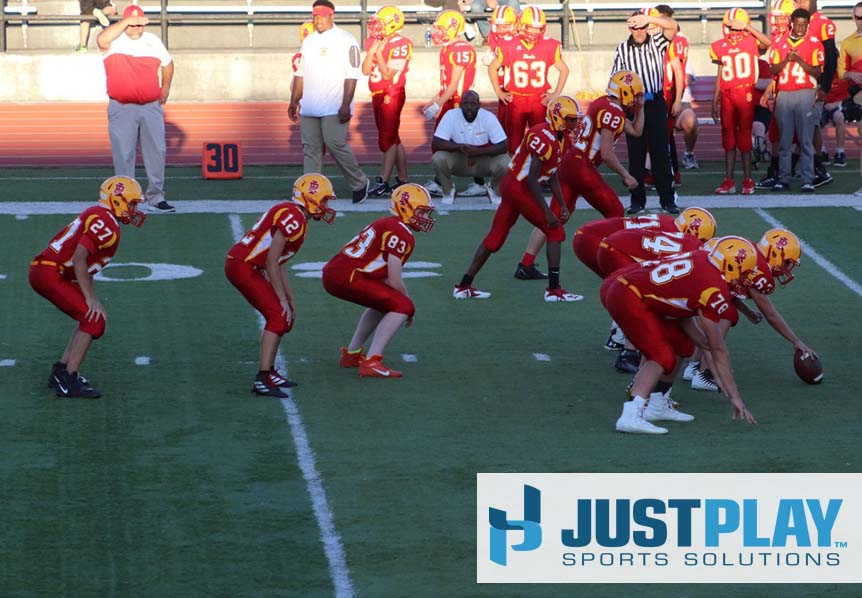 The Rock Island High School football program employs a spread, up‐tempo, no‐huddle offense. When we began running our system, we were primarily a power team. We still love power, but our best run series every year is our counter series.

The Rock Island Counter is a gap scheme on the playside, two “pullers” or extra play side blockers and some type of misdirection. We can run the series out of every formation in our playbook and can easily adjust to different defensive looks to maintain advantage. Counter is a physical run play that brings multiple players to the point of attack, utilizes misdirection and creates space for superior athletes.

The play‐side tackle (PST) and play‐side guard (PSG) have gap blocks on the backside linebackers in the inside gap with heads up. The PST and PSG can help away from the gap but must maintain gap integrity. The gap is the priority. We communicate help or double teams with the code words “uno, dos and tres.”

After the snap, the center blocks the first man, heads up to the backside. He can help, but must maintain gap integrity.

The back‐side guard (BSG) is the trapper. He pulls and kicks the end man on the play‐side line of scrimmage. When pulling left or right, he must use left or right shoulder leverage, respectively.

The back‐side tackle (BST) is the wrapper. He pulls with depth and wraps for the No. 1 play‐side linebacker, or the first opposite color.

The only tag that affects the offensive line is a “switch” call, which will switch a fullback, H‐back, tight end or wing responsibility with a BST, who would then funnel hinge.

We do not teach logging on the offensive line, but rather teach guards to kick in our Counter Series. If you give a high school offensive lineman a choice to log or kick, and he is up against a good player, he most often chooses log. This drastically reduces the physicality of the play and allows it to be stretched out by the defense, giving more defenders time to get to the point of attack.

We teach our tackles to pull with some depth, giving us multiple advantages.

Out of 10 personnel, the box is lighter and our Counter Series stretches the field from sideline to sideline. Our most often used variation from 10 personnel is our Triple Option (See Diagram 1). The quarterback reads the backside EMOLS, the running back runs the counter, and the quarterback can attack the alley or throw a “now screen” to the perimeter. Our quarterbacks can check completely out of the run and throw the screen immediately if the defense is misaligned. 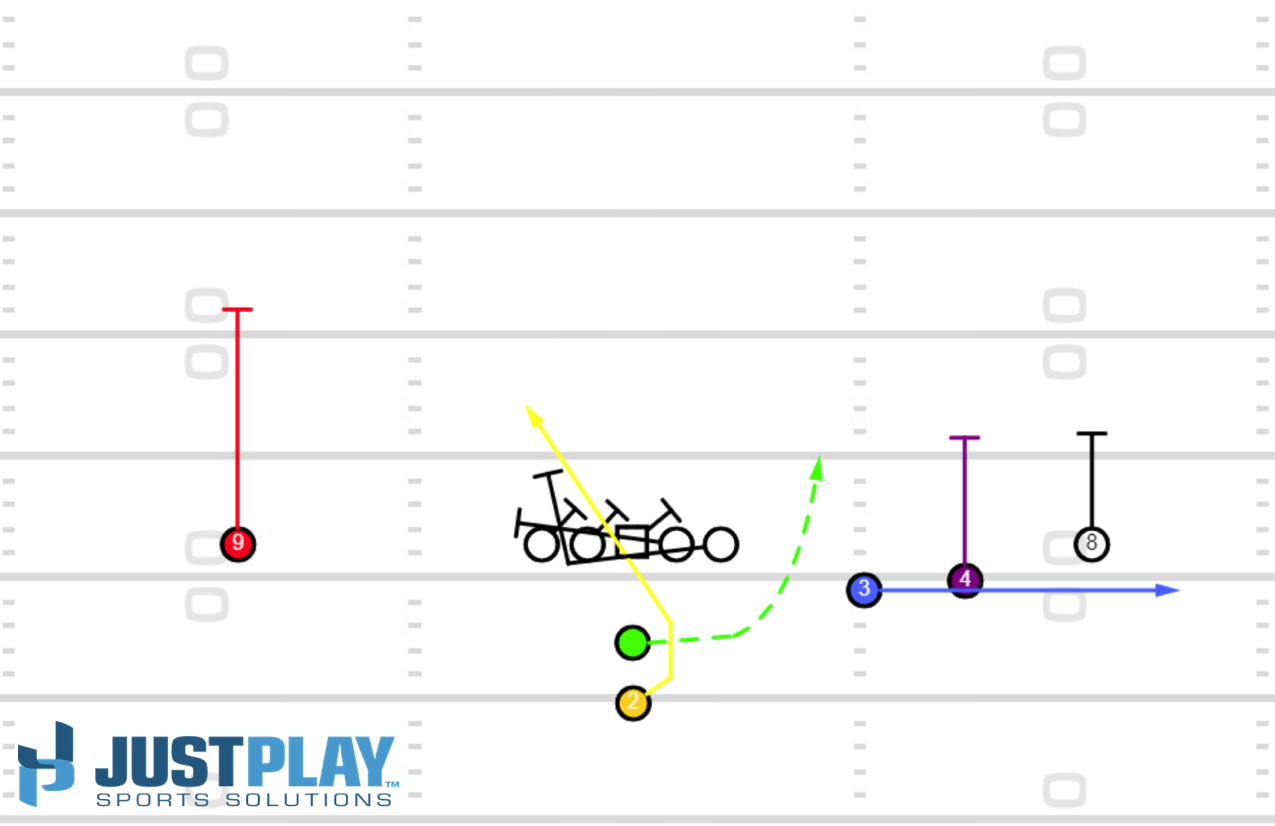 Counter Triple Option (Diagram 1) – Tailback is the “dive,” and quarterback can attack the alley. Receivers are blocking or catching a screen. 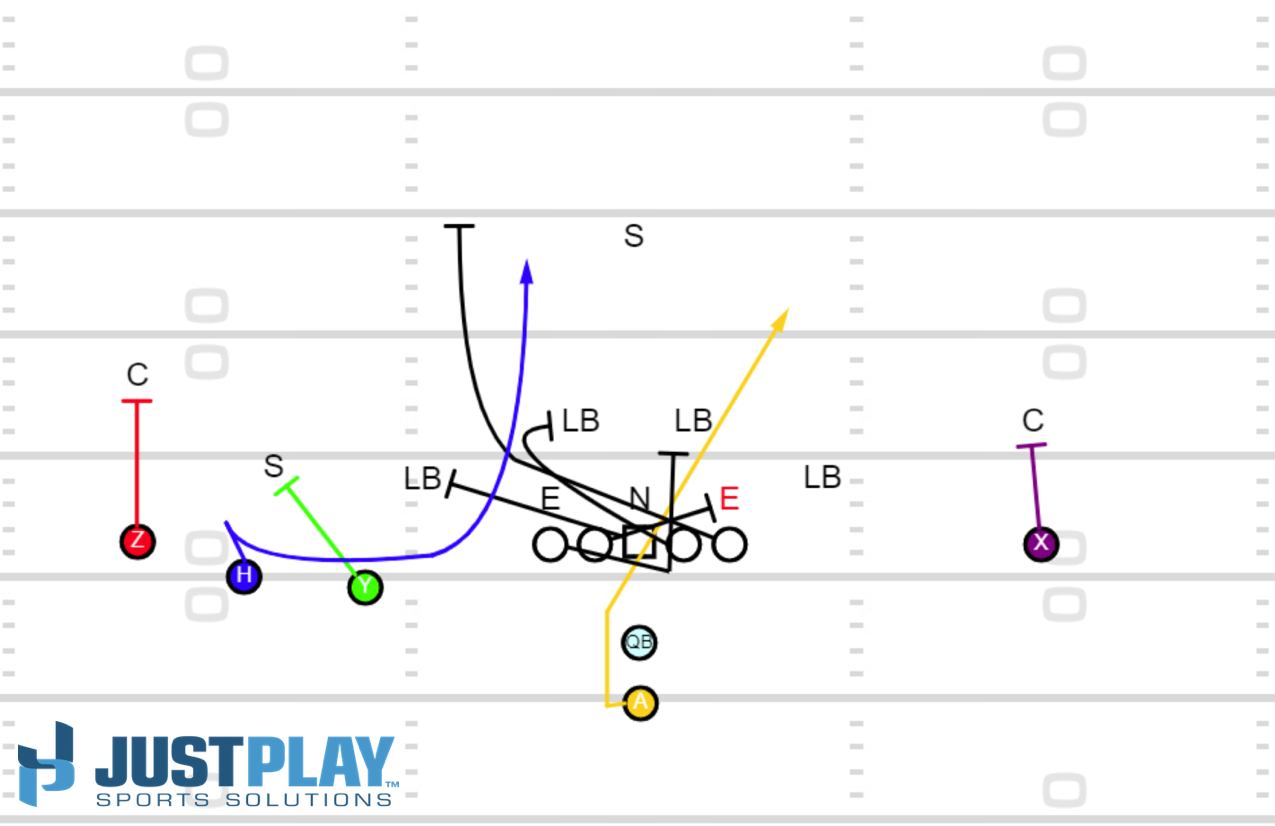 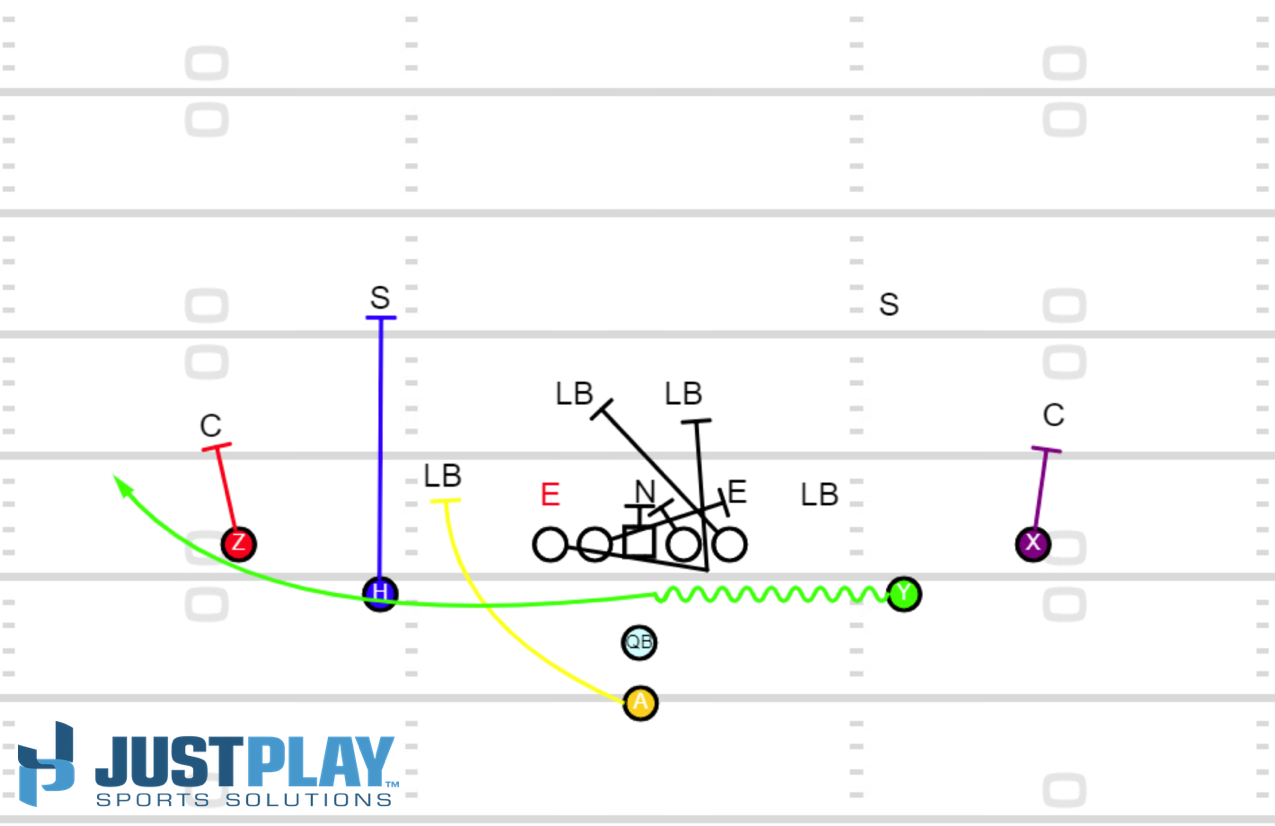 Jet Read with QB Counter (Diagram 3) – Counter play is away from the jet, read EMOLS play‐side of the jet sweep. 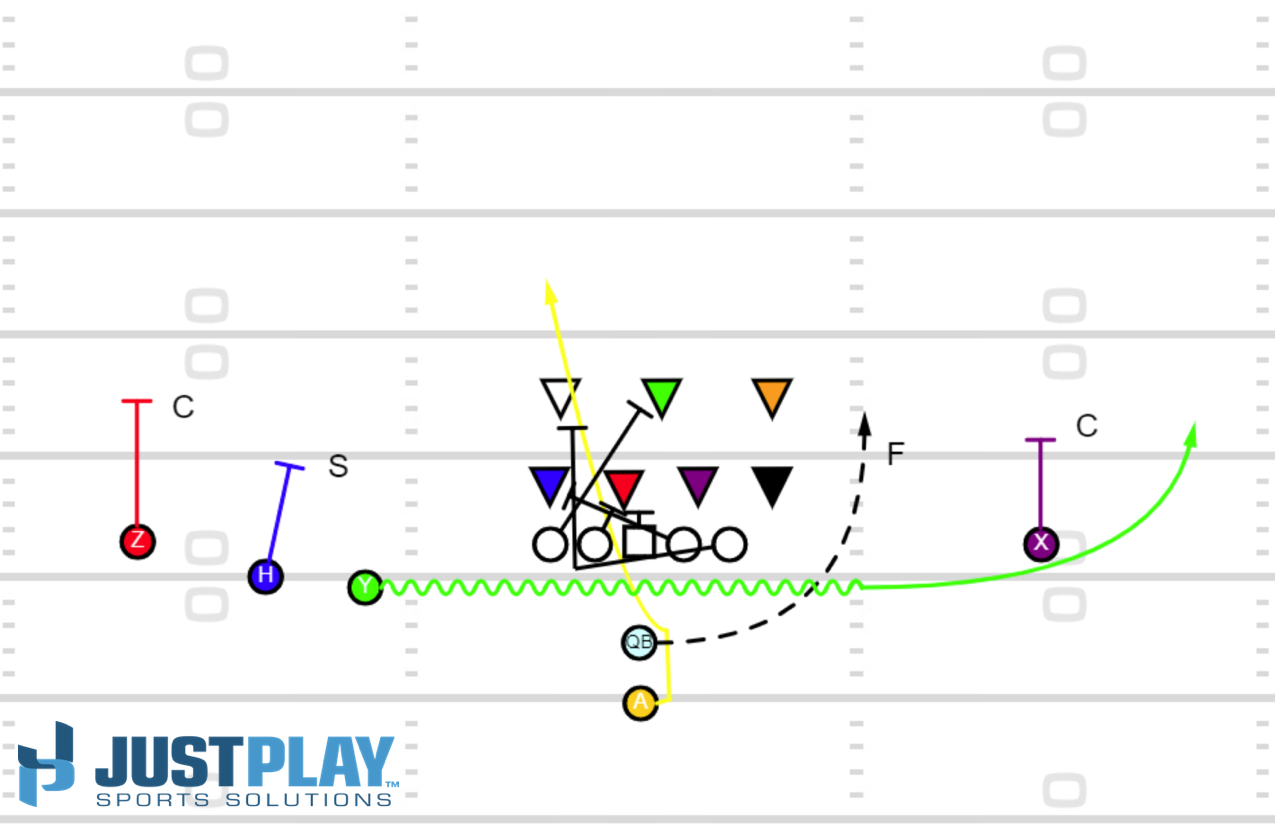 We use 20 personnel when — athletically speaking — it is not to our best advantage to spread out our opponent. If we have a physical advantage, especially with skill players lined up in the backfield, we’ll use it. We run all of the same plays from 20 personnel as 10 personnel, but are unable to horizontally stress the defense the same way.

With 20 personnel, we take the “Read” out of the play and can block everyone on the defensive front. This is especially when leading at the end of a game or in unusual situations such as a quarterback injury. 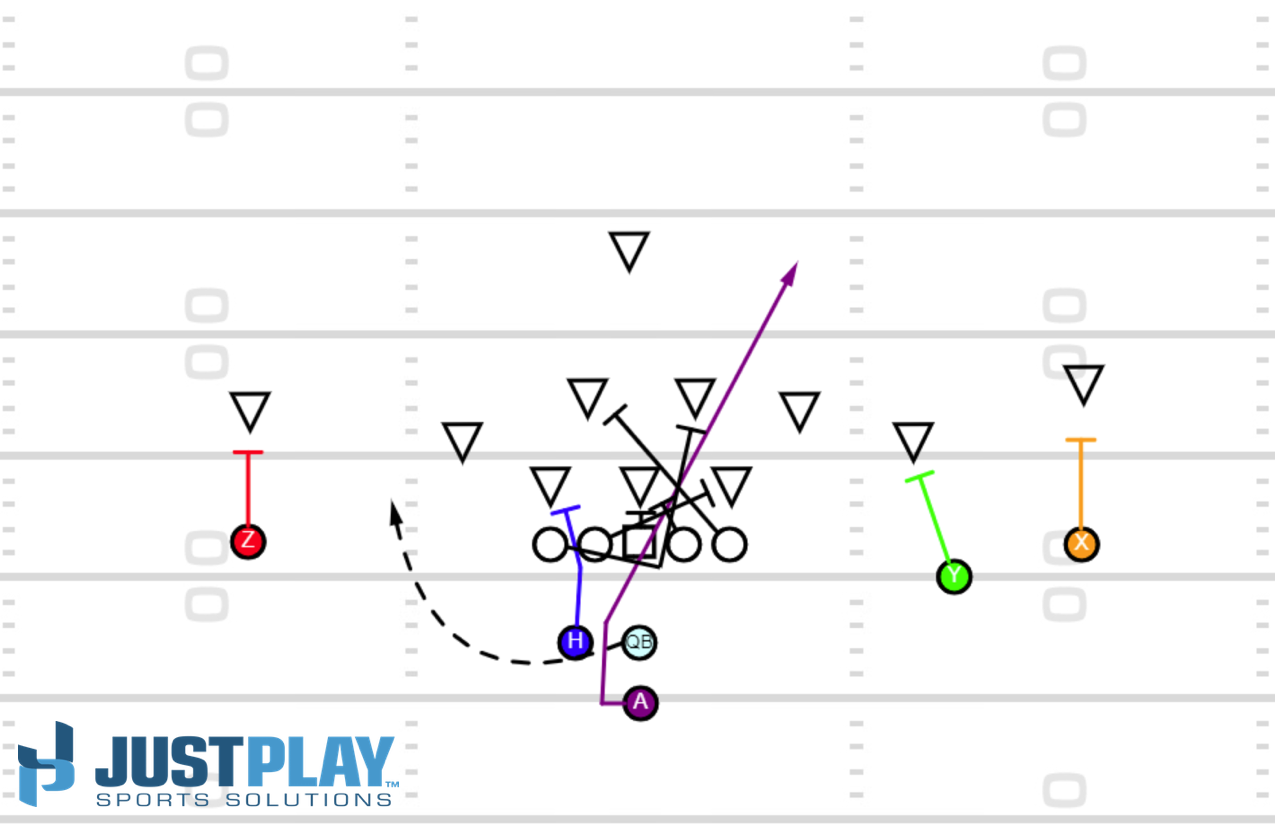 Straight Counter (Diagram 5) – Fullback blocks the man that would usually be read in the 10 personnel Triple Option. 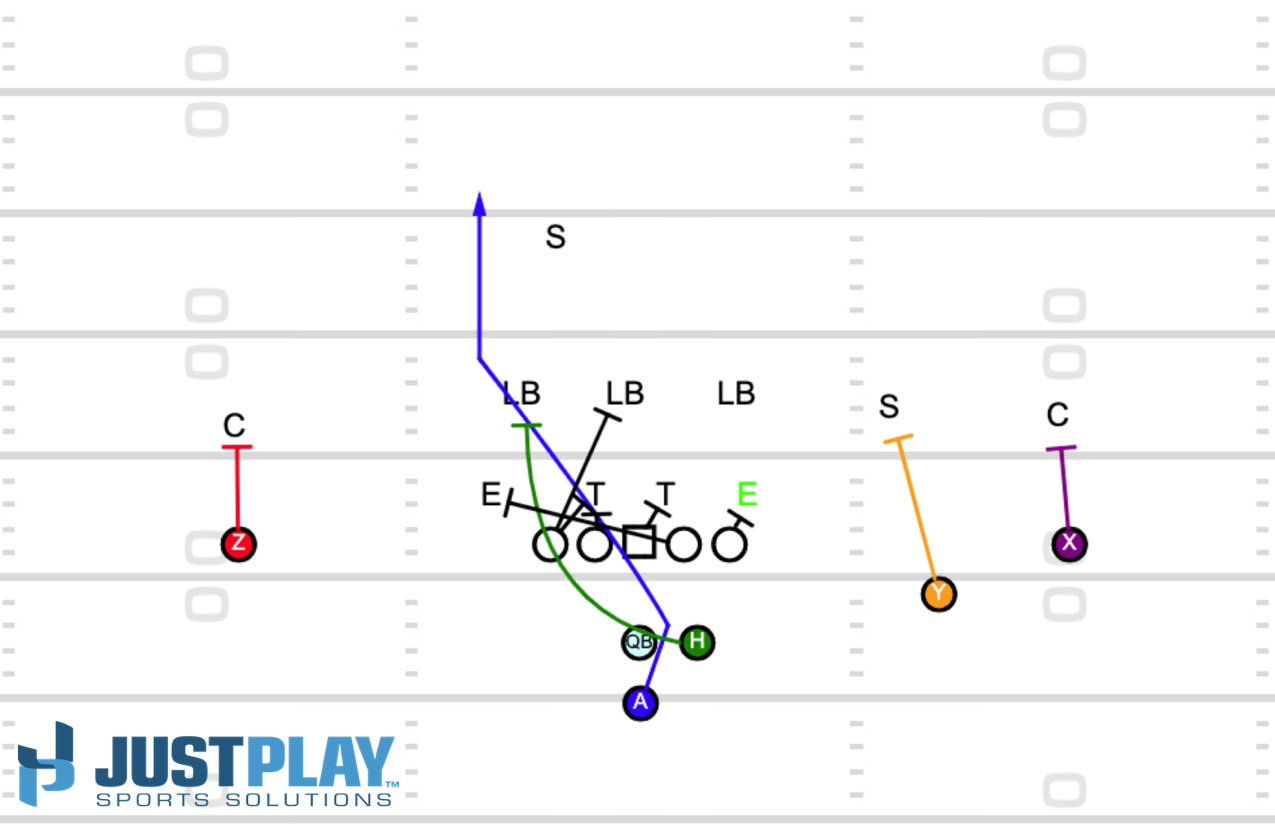 Counter Wham (See Diagram 7) – Fullback kicks out the back‐side edge or the player that would be the read in 10 personnel Triple Option. Timing from the pistol is critical and takes practice. The blocking back must avoid the quarterback and pulling linemen. 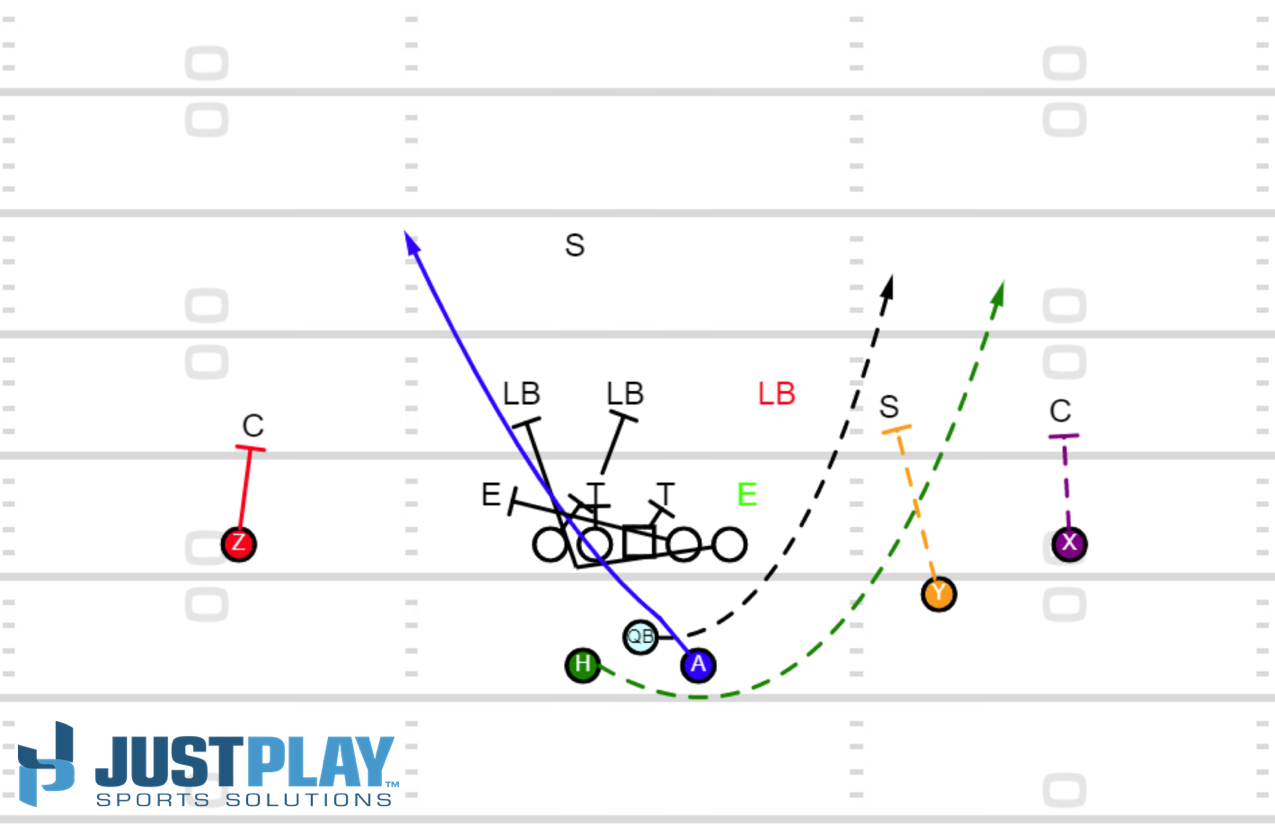 Counter with Speed Option (See Diagram 8) – Probably our most successful version of Triple Option from 20 personnel. It can be extremely successful for programs with two talented true tailbacks.

Next season, Rock Island will have true tight ends for the first time, big guys who can run a little bit but who also have a large catch radius and play a physical game. From true 11 personnel, we’ll likely run a Slip version of our Triple Options series, something we can’t do from 20 personnel. 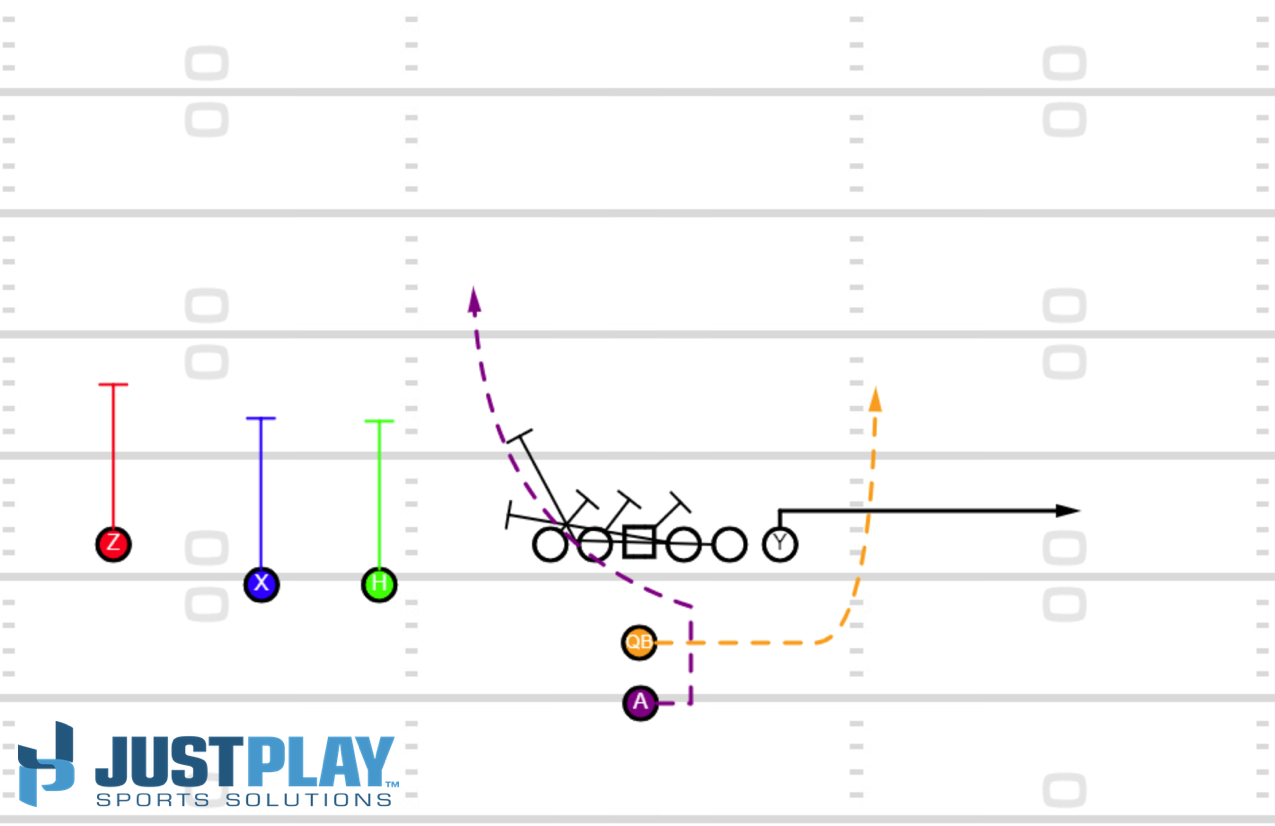 Slip Version from 11 Personnel (Diagram 9) – On the counter side, the three receivers put the defensive backs and hybrid players in conflict by alignment, making the run box lighter. If the defense gives the quarterback a keep read, then you have the quarterback and tight end options. They will likely have the edge and face smaller players attempting the tackle.

No offense is perfect, and as a result, defenses can still make life difficult if they use the following specific approaches.

Cover 0 with Superior Athletes: This approach makes it difficult to stretch the field horizontally, forcing us to win one‐on‐one matchups up front. We sometimes run Straight Counter against it, but usually opt for quick game and rub routes instead.

Blitzing 2 Off the Read Edge: This is common sense, and if a defensive play caller can do this consistently, you need to look at your self‐scout and ask how you became so predictable. It happens to everyone.

When the inside linebacker and edge defender exchange gaps on the snap, the play becomes difficult for the quarterback to read when running Triple Option versions of Counter. We answer this with a fullback, and we block everyone. If the quick‐exchange side misses the tackle or is successfully blocked, you have big‐play potential.

When it comes to X’s & O’s, there are plenty of ways to skin the cat, but the Counter Series keeps it simple for the offensive line, is easily “dressed up” and provides a multitude of looks. It also allows for teams to take advantage of any personnel strength they have (fast, big, strong, quick, and more).

This article was written by Ben Hammer, Head Football Coach, Rock Island (Ill.) High School. He can be reached at bhammer70@gmail.com with questions.