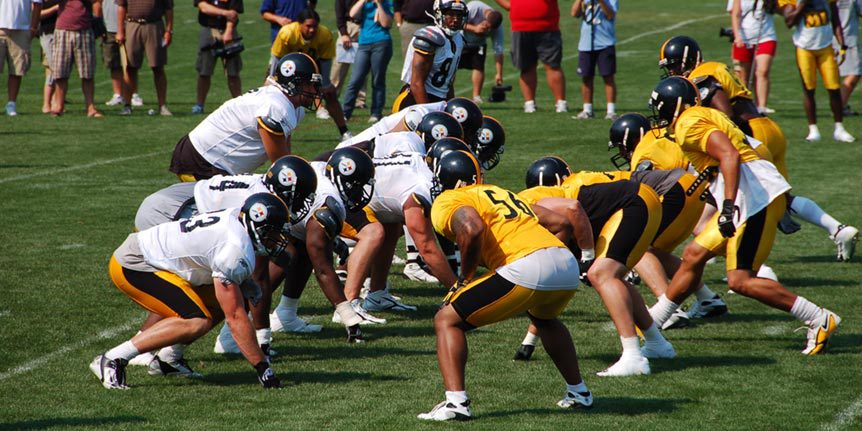 The power read is nothing new in the game of football, and neither is the use of the shovel pass. However, the power read with a shovel option does seem to be experiencing an uptick in its popularity, especially as NFL teams are implementing it on the game’s biggest stage. This trend is most noticeable as the Kansas City Chiefs are putting it to use with their talented skill players and Alex Smith’s background in option football. By using a shovel pass to a player following a pulling guard, teams can run the power read and not risk having their quarterback take the hit. It also creates a way for teams without an athletic quarterback to run the power read. The shovel concepts can be executed out of a variety of personnel packages and formations, and this article is going to explore some of the creative ways the shovel pass is being used at various levels.

First up is the Kansas City Chiefs running the power read out of 11 personnel last season against the Pittsburgh Steelers. Lining up in an empty formation with Travis Kelce at the H, the Chiefs have Spencer Ware split wide left, and Alex Smith brings Tyreek Hill on a jet motion pre-snap. Smith has his eyes on James Harrison, the last man on the line of scrimmage, all the way. Smith puts the ball briefly in to Hill’s pocket, sees Harrison coming upfield to play the sweep, so he pulls the ball and shovels it to Kelce, who is following the pulling right guard. Kelce bursts through the whole for a gain of 13 yards on the play. The next play is from Week 2 of this season, and the offense comes out in a 2 x 1 set with De’Anthony Thomas lined up to Smith’s right, Kelce at the H, and Hill in the right slot. Again, Smith sets his eyes on the last man of the line of scrimmage, Derek Barnett of the Philadelphia Eagles. Hill moves across the formation before flying back towards the right side on the jet return motion as a decoy, and Thomas takes a flat path across Smith’s face as the ball in placed temporarily in his pocket. Barnett flies upfield to play the running back, and Smith calmly pulls the football and delivers it to Kelce, again following the right guard. This time, Kelce breaks free for an electrifying 15-yard touchdown that culminates with a leap for the end zone from the 5 yard-line. Just like the coaches drew it up. Although not an option play, the Steelers used the shovel pass in Week 2 against the Minnesota Vikings. Working out of 11 personnel, the Steelers lined up in a bunch set to the right. Pre-snap, quarterback Ben Roethlisberger motioned JuJu Smith-Schuster across the formation, where he settled behind the nub tight end. On the snap, Roethlisberger mimicked rolling to his right before shoveling the football to Smith-Schuster, who was led by the blocks of his pulling left guard and running back, Le’Veon Bell, and he scored the 4-yard touchdown after lowering his shoulders at the goal line. The previous play examples are all from recent games at the professional level, but there’s a lot of innovating concepts involving the shovel pass at the collegiate and high school levels. Unbalanced formations and motions can be used to create confusion for the defense and give an offense a greater advantage in terms of numbers.

Starting with some unbalanced examples, here’s a look out of 12 personnel. Two receivers line up to the left, and both are on the line of scrimmage. In the backfield, there’s an H lined up as a wing outside of both tackles, and the running back lines up on the right of the quarterback. On the snap, the running back takes a flat sweep path to the left, the wing on the left fans out to the last man on the line of scrimmage as the quarterback reads the C gap defender to decide whether to give the ball on the sweep or pull the football and hit the backside H behind the pulling right guard. There doesn’t always need to be a mesh point, and triple option is a popular way to integrate the shovel pass. Coming out of a 2 x 1 formation, the single receiver is off the ball and lined up to the left, and the twin receivers both are on the line to the right. The single takes off on a jet motion, the quarterback gives a flash fake to the jet action, the running back goes behind the quarterback to get in pitch relationship on his left, and the H slips inside for a potential shovel pitch. The previous varieties I’ve discussed have involved a shovel pass to a player in the backfield, but the Florida Gators were able to effectively use a backside tight end in the same manner during the Tebow Era. While in a 3 x 1 trips set, Tebow lines up at quarterback with an offset running back to his right. On the snap, the running back bursts behind Tebow to get in to pitch relationship. The right guard pulls on a power path, and the tight end gets lost in the mix as he follows closely behind his lead blocker. The initial read is the play side defensive end—if he expands or comes up field, the ball is delivered on the shovel. If the end crashes to the pulling guard, Tebow can attack downhill with his eyes on the alley defender for the option with his running back. The talented personnel of the Gators created a lot of problems for defenses, and the Gators had a ton of success running this concept during Tebow’s time in Gainesville. Swing passes can be used to get the ball to the edge. Using 12 or 21 personnel, some schools are lining up twins to one side and the nub tight end flanked by a wing. The running back lines up in pistol and is sent on a pre-snap quick motion out towards the twins for a swing pass. If the alley defender is out-leveraged by the motion, or the numbers advantage is in the offense’s favor, the quarterback can sling the ball out to the edge. If the swing pass doesn’t look good pre-snap, the quarterback runs power read by getting his eyes on the play side defensive end and the wing is his shovel option. A similar look to the previous concept can be run out of empty. The slot to the trips side can be motioned in to a wing position, or he can line up there initially. The slot on the twin’s side runs a bubble route and is the first option. The outside receiver blocks the most dangerous man (defender that triggers first on the bubble), and if the alley defender stays flat-footed or stays in the box, the quarterback can flip it out to his man in space. Again, if the alley defender leaves the box, the shovel read is the play side defensive end. A more traditional look for the shovel pass involves getting it to the running back. In a 2 x 1 formation with twins to the left and the H lined up as a wing behind the right tackle, the quarterback sends the H on a quick motion to the left. The QB’s eyes are looking to the alley defender initially, then to the play side defensive end. The running back steps up and tries to get lost in the trash before following the pulling guard for the power read look. The final play is another power read look with the H as the shovel option. If the defensive end squeezes to play the shovel, the quarterback keeps the football and follows his running back, who is serving as his lead blocker. There’s a ton of creativity being put on display by football coaches across the nation, at all levels, and the shovel pass doesn’t look to be going away any time soon. Hopefully this article’s examination of shovel concepts has offered something to add to your team’s offensive playbook or sparked a new idea that blends better with your scheme and personnel.