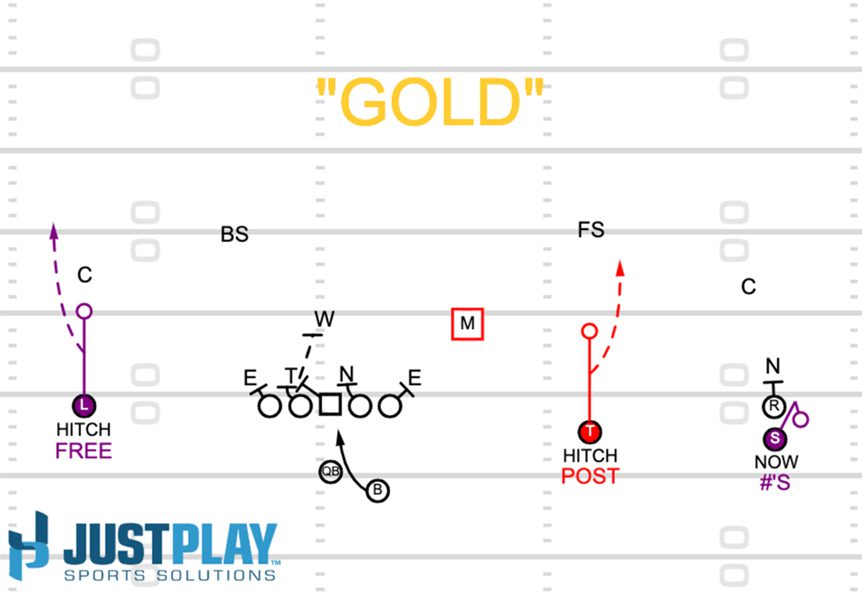 Football in the state of Texas is a way of life. Being a coach’s kid in a football state gave me the unique opportunity to learn what it means to be a coach. I played quarterback for my father, Mickey Finley, at Arlington High School, so I have always had an offensive mind, which is perfect for one-word RPOs.

It was in high school that I learned my first two offensive schemes. Growing up, Wing-T was the offense that was most popular because of the Permian Panthers’ great teams. When my older brother graduated and went on to play safety at the University of Nebraska, my dad changed completely. We switched schemes to the offense that helped Tom Osborne win three national championships in four years. I learned how to run the option and check to plays that gave us a number advantage in the run game. As my senior year rolled around, my dad decided that we were going to continue to run that offense, but we were going to do it without using a huddle, which I absolutely loved.

When I moved on to play under Bob Stoops at the University of Oklahoma, my offensive education continued to grow. As a tight end for the Sooners, I was fortunate to be in a transition period for our offense. There was still an Air Raid mentality left from Mike Leach, but the offense was slowly being transformed by Chuck Long and Kevin Wilson. When I left Norman, Okla., we were a multiple offense that was consistently among the nation’s best. My experience as a tight end was eye-opening, because I could learn both the run and pass game. I am forever thankful that I have been in the tight end room since college, because it’s forced me to learn and know the entire offense at every place I’ve been. It’s through these experiences that I have developed my beliefs for winning offensive football.

Those beliefs include the following.

The ability to run the football is what separates teams that score a lot of points and teams that win a lot of games. Championship teams find a way to run the football. There are different philosophies on how to get this done: big and powerful, speed and space, quarterback run and run-pass option are popular. Arguments can be made for any style. The right personnel wins those arguments.

Tempo is commonly associated with today’s fast-paced offenses. Although a fast offense can be difficult to defend, it must also control the game’s tempo. Today’s great offenses can change the pace of the game at any moment and continuously pressure opposing defenses.

A football field is 53.3 yards wide and 120 yards long. Championship offenses attack every single inch. There are multiple ways to attack every area. The defense must defend from sideline to sideline and as far as the quarterback can throw.

I have been extremely fortunate to be a part of cutting-edge offensive staffs. I was part of the Oklahoma staff that was one of the original no-huddle offenses, a precursor to RPOs. We used fast tempo mixed with a tight end, downhill run game. That offense set multiple records by scoring 60-plus points in five consecutive games, produced more than a dozen NFL players and featured a Heisman Trophy quarterback.

I spent one year under a record-setting offense at Baylor. That offense was top five nationally for five consecutive years. What I learned from these two championship offenses is that simplicity is key. When players need not think about assignment, they are free to play at their highest speed. When 11 athletes play at their top speed, your offense can reach its full potential.

There are two ways to simplify: fewer plays and fewer words. This also serves the function of RPOs.

Our motto is, “Small menu, large understanding.” We limit our run and pass plays so our players can execute against all defensive looks. With fewer plays, we ask our guys to memorize 10 to 12 one-word plays each week. While this sounds like a lot for a college student to do on a weekly basis, we give them rhyme and reason by grouping plays into categories.

For instance, black and white will always be in the zone category, but the formation and route tag may change. Combined with large volumes of reps, this allows players to lock into their assignment by the second practice of the week and play at a tempo unmatched by the defense.

Here’s a great example. This is an inside zone blocking scheme that should be familiar to those who run RPOs. There will be one signal given to all skill players and the quarterback will simply tell the offensive line, “GOLD.” (See Diagram 1) Outside WRs (L & R) – Our outside receivers do not switch sides, so they always know to line up halfway between the numbers and the sideline. If they end up as a single receiver, they have a 5-yard hitch route that converts to a fade against press coverage. If they have the slot stacked behind them, they block for the now screen.

Slot (S) – Because the play is a color, the slot (S) knows that he will always stack behind the outside receiver that is aligned to the wide side of the field. He will run the now screen.

Tight End (T) – The tight end will always go to the wide side of the field and line up 3 yards outside the hash. He has a five-yard hitch route that converts to a fade against press coverage.

Running Back (B) – The running back aligns to the field and expects the handoff from the quarterback.

Quarterback (Q) – After delivering the play to the offensive line, he will always have the same process on “color” plays. His process includes:

If we are on the right hash, we call Green. Everything would be flipped and the offensive line would block inside zone right. The same rules still apply to each skill position.

Here’s another great example that still fits in the color category for those who want to run one-word RPOs. The color family is different so the only thing that changes on the play is the run scheme. “Blue” is the name of this play and it is a tackle-pull scheme. (See Diagram 2) “Red” would be the opposite (American flag colors with “L” and “R” again). The quarterback still has the same reads, and the receivers and tight end still have the same rules. The only skill player that changes is the running back and how he reads the run.

The quarterback makes these plays work. It takes many reps to feel comfortable with executing these plays at a fast tempo. The tempo that we play, when combined with a limited number of plays on the call sheet, allows us to get hundreds of reps before we step on the field for a game. The multiple options for the quarterback combined with snapping the ball at a high rate of speed puts maximum pressure on the defense.

With threats like these, the defense must remain alert. Because of that, my experience has been that defensive coordinators will tend to stay in base defense more so that their players have a chance to get lined up and make calls.

As is true with every scheme, we must teach our players to execute these plays at a high level. Just like I did my senior season of high school, players must be forced to get comfortable operating at a tempo that is far faster than what is allowed in a game. One-word calls are the simplest and most efficient way to get that done. When players become comfortable playing at top speed, we can always slow down and get our best call in the game.