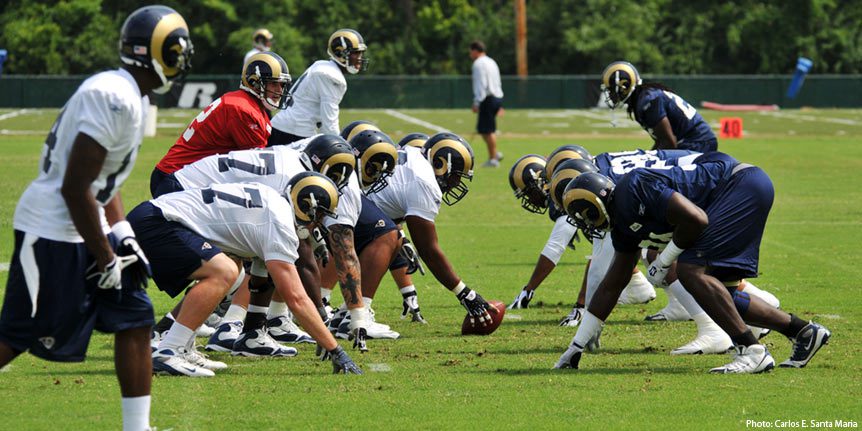 Football programs are employing the mesh concept at all levels of the game and can succeed using it versus man or zone coverage. Purists will argue that mesh is not a play that a coach adds to an offense overnight. Instead, it must be something that you are practicing constantly. There’s merit to this argument, just as there is when adding any new concept to an offense, but mesh-sit is a play that coaches could add regardless of their players’ familiarity with running mesh.

A traditional mesh concept involves two offensive skill players running crossing routes from opposite sides of the field. As their routes intersect at around six yards from the line of scrimmage, one player runs underneath and one over, and they get close enough that they could reach out and slap hands. If the receivers recognize a zone scheme by the defense, they will each find an open window and throttle down to look for a pass. Against man coverage, the underneath player will aim his route as close to the over route as possible, and the over player will attempt to force the chasing defender to adjust his path, creating a natural rub (or mesh), and allowing the under player to spring free as an open target. After the players mesh, they should slightly angle their routes up-field to allow them to run away from their trailing defender. Since players are running across the field, coaches often use slots or tight-ends on the mesh. Outside receivers can be used, but they should reduce their splits to be closer to the middle of the field or be put on a short motion. The quarterback will make a triangle read. The first option is the outside receiver on the corner route: if it’s there, take it. The next read will take his eyes to the flat defender. If the running back flare or flat route has out-leveraged the defender, the ball should go there. If the flat defender expands with the running back, the quarterback should look to dump the ball to the receiver on the crossing route or sitting in a window versus zone. What makes mesh-sit different is the introduction of a third receiver around the mesh point. This player’s landmark is ten yards downfield, directly in line with where the ball was snapped. The crossing routes will intersect at about six yards downfield. For teams that are used to running mesh, it should be easy for the receivers to recognize the defensive coverage and settle in windows versus a zone (but they can’t stop in the middle of the field, because they’ll block the sit route). If your team is not accustomed to doing this, it may be easier to coach your players to stay on the run regardless of the coverage. Versus a zone defense the mesh will pull apart the defenders in the middle of the field causing a window to open for the sit route. The initial progression read is usually a wheel route by a running back or slot, followed by the under crosser, then the sit. If the defense is in man, the quarterback still can read the mesh, or look to his options on the outside. Any outside receivers involved in the mesh or running the sit route need to use tighter splits, but coaches can employ various formations and personnel packages with this play to match their offensive scheme or exploit a defensive matchup.

Here’s an example of the Philadelphia Eagles running this concept versus the New England Patriots in Super Bowl LII.

The diagrammed play below is from Mike Martz’s time with the St. Louis Rams in the early 2000s, and it comes out of 21 personnel and a pro set. The outside receiver on the left has a tighter split since he’ll be running a crossing route, and the outside receiver to the right has his regular alignment, but he’s brought on a short pre-snap motion. The split backs each have check-release options, with the backs running flat routes for a hot read, but converting to a wheel if they don’t immediately get the ball. For more information, check out Chris Brown’s article.

Another play from Martz’s playbook comes out of a 3 x 1 shotgun bunch set. Here all the receivers have tighter splits and the running back will run a check-release to the left flats. The left receiver and the point man will mesh, the outside receiver has the sit, and the slot will run the wheel. Martz’s plays are an example of the concept from over a decade ago, and they’re still good, but I also want to provide some more contemporary looks. Here are some ways that the play has been run in the last year at the college level. Coming out in empty, the offense lines up with a tight end and receiver to the right. Pre-snap, the slot motions across the formation with eyes on the outside receiver. Once the outside receiver moves, he knows the ball has been snapped and sprints on his wheel route, he’s the initial option. If it’s not there, the next read is the mesh, and then the sit route. The left outside receiver has a 15-yard dig, but it is unlikely that the progression ever reaches this route. Instead, he’s in position to potentially throw a key block to spring either the sit route or over crossing route after the catch. After running the play several times, a great way to take a shot off this play is to change the dig route to a Post or Post-Corner. As two and three tight end sets are becoming more and more popular, this concept is a great way to use utilize your athletic big men. Most coaches will send a bigger target as the over crossing route, because the larger the player is, the more difficult it is for the under route’s defender to navigate the traffic, allowing a faster receiver to attack open space in the opposite flats. The below diagrams just include some additional formations, personnel, and motions that teams have employed to disguise the play and break tendencies. The final diagram is a goal-line or short yardage variation out of empty. With a tight end on the left and three receivers right, the tight end will take an outside release and immediately get his eyes on the corner. If the corner is trailing the outside receiver on the left, the tight end will hitch up and show his numbers to the QB. The receiver will pass just underneath the tight end and continue off the rub, sprinting through the middle of the field, even against zone. If the corner bails on zone coverage, the tight end has a corner route to the back pylon. The over crossing route will sprint through the middle of the field and act as another natural rub for the receiver from the left, he will not stop on his route either; against zone this will create a high-low opportunity reading the corner. The outside receiver has the ten-yard sit route right over the ball. The slot receiver is the hot route on the play and will run an arrow route straight the front pylon or first down marker; if he doesn’t get the ball immediately, he will convert to a wheel aiming for the back pylon. This is not the Air Raid version of mesh. The mesh-sit is simply a variation that some teams have been using recently, and a benefit is that players don’t have to be familiar with running mesh or recognizing defensive coverages for a team to incorporate it. Hopefully you’ve found something that can be valuable to your team’s offense moving forward, and I’m excited to see the continued innovation of this play.

For more information about the AFCA, visit www.AFCA.com. For more interesting articles, check out Insider.AFCA.com.