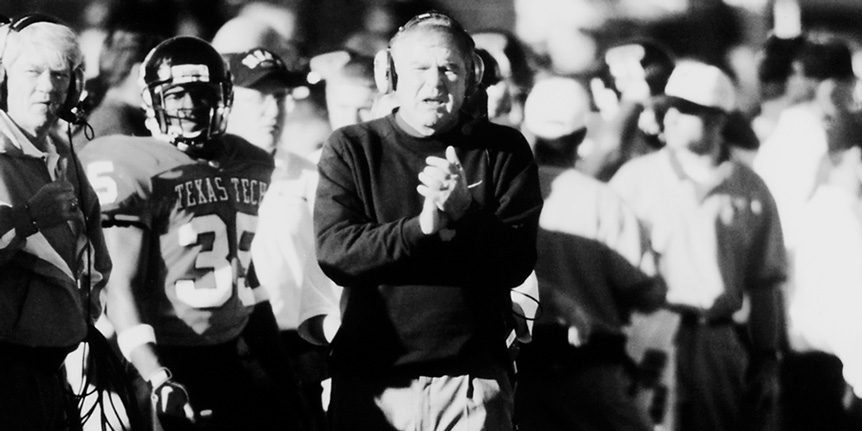 Football is still divided into three categories: offense, defense and special teams. Certainly, if there is one area that gets slighted, it’s the kicking game.

That old adage that between three and five games per season are determined in the kicking game holds true. Just check the records if you have the least doubt concerning this. It will startle you if you aren’t aware of it.

The approach to the kicking game that we take at Texas Tech is a common-sense approach. When I say that, I mean we understand the importance and the value of a good kicking game, so we involve our very best players in the kicking game.

Defensively, we are responsible for the following areas: kickoff coverage, punt return, extra point and field goal blocking, and punt protection and coverage.

On punt return, you have no choice but to use your defensive players, and the same holds true for extra point and field goal blocking. On the kickoff team, we usually employ defensive backs, linebackers and defensive ends, just as we do on the punt protection/coverage team.

In this article, I will talk about kickoff coverage and punt protection and coverage. Our kickoff principles differ from some of the theories in that we kick off from the exact middle of the field. We want a high, straight kick to the goal line. We use the waterfall approach in alignment so we can all hit the line running full speed. Our alignment can be seen in Diagram 1. We have three potential safeties on each kickoff: No. 3, the kicker (No. 6) and No. 9. We begin coverage by spreading across the entire field. Each player must maintain his relative distance between his teammates. The farther and deeper the ball goes, the longer we stay in our lanes.

In the event we get forced out of our lane, we work hard to get back into our lane. Players must be aware of who is blocking them and beat those blockers or escape the blocks.

Once the ball is fielded and stars in a direction (left, middle, right), we start converging on the football (See Diagram 2). This is the key to coverage, other than busting your tail down the field.

The safety opposite the return (right or left) pulls out and keeps outside leverage on the football. The outside two coverage men fill the hole created by the safety pulling out, maintaining the normal coverage lanes one gap inside. The safety to the side of the return no longer is a safety. He is a lane runner that is totally involved in coverage.

The kicker faces up with the ball at a depts. Of approximately 8-10 yards behind the coverage team. If the ball comes up the middle, the kicker is the middle safety and both safeties pull out of coverage after the ball has committed to the middle and maintain outside leverage on the football.

We attempt to kick each kickoff so it will be returned. This coverage team has a tremendous amount of pride and works hard to make the team. This is a highly competitive situation that is healthy. All of our defensive starters want on the kickoff team. The next phase is the onside kick. This is something that we only use when our “backs are to the wall.” The success or failure of the onside kick can be the determining factor of a football game.

Our approach is that in order to have a chance, we first must have a perfectly executed kick. Without the proper kick, you have no chance. Never should the ball be kicked less than 10-12 yards. This is the No. 1 point of emphasis with the kicker. We strive to get the big hop out of the ball. You can see our onside kick alignment in Diagram 4. The major point of emphasis is to not allow the kick to go out of bounds. This is the responsibility of No. 1. He plays just like a shortstop covering the boundary.

Another major role belongs to No. 3, which is a safety. He must not allow a lineman to catch a clean kick and return it for a big gain.

The remainder of the coverage attacks all out. This is the key, to force a mistake by the receiving team. Down through the years, this onside kick has been highly successful for us.

The last phase of coverage is our punt protection and coverage. The quickest way to lose a football game is to get a punt blocked or a punt returned for a touchdown. This phase of the kicking game must be executed properly in order to be a successful football team.

We use the spread punt, with zone protection. Again, we work hard to get the ball kicked straight downfield. Our alignment and splits are illustrated in Diagram 5. The execution of the protection starts with the center. His job is to make the perfect snap in the range of seven-tenths or eight-tenths of a second. The center must pop his head up and get his feet in a position to anchor the line.

After his snap, he pops up with a good base, then starts thinking about coverage. The guards’ split is 2 feet from the center. Both guards hinge 45 degrees, each working his butt in the hole. His blocking assignment is from his inside foot to the inside foot of the tackle. If two people penetrate the gap, block through the first man to the second one. The hardest job for the guard is keeping his butt in the hole between himself and the center.

The tackle’s job is the same as the guard’s, except his butt in the hole is not as strongly emphasized as the guard. He must keep his inside foot planted as long as possible with the same principle as the guard with two threats in the gap.

The end hinges the same as the tackle, keeping his inside foot planted as long as possible. The end must re-route the rush of the outside man.

The up-backs have the responsibility of the gap between the center and guard. There are two major points of emphasis. Make sure the up-backers are lined up 1 yard deep and any threat (charge) in the gap must be stopped. If two people come in that gap, the up-back must make himself big and get between the two men.

The personal protector, which we call the “searchlight,” lines up 6 yards deep behind the prospective guard (left or right depending on the left-footed or right-footed kicker). The searchlight must be aware of overloads and must use good judgement, never taking a backward step. His job is to take any immediate threats to the kicker. Don’t go anywhere unless there is a reason to go. After the ball is kicked, the searchlight is a safety to our right.

The kicker’s job is to field the snap, know whether there is a rush, concentrate, and kick the football. If we have a choice, we will use a two-step punter. We align the punter 15 yards deep and work hard on stepping and fielding the ball simultaneously. This is very important.

We strive to get the punt away in no more than 2.3 seconds. After the ball is kicked, the punter is our safety to the left.

We change our containment coverage players week to week. Usually, and as a basic rule, our containment is by the ends. There is a need to have flexibility built into your coverage so you can change up the containment every week, or even punt to punt.

I must stress the importance of a high, straight punt. Any hang time of 3.9 or over is key to our coverage. Our basic coverage is illustrated in Diagram 6. We sincerely believe that special teams are an integral part of a football team. Sell the value of special teams to the point that you feel like this can be the edge in the close games, because it will mean the difference many times during your upcoming season.