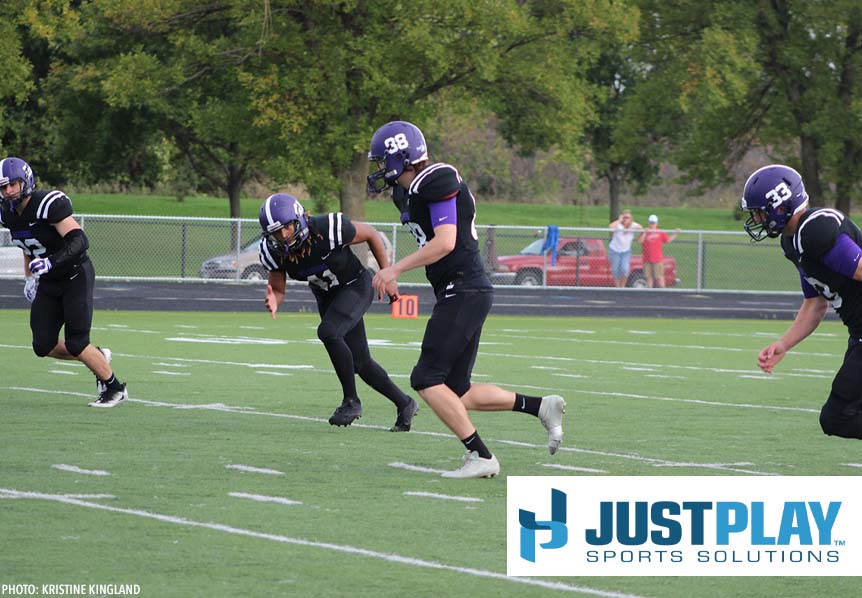 At Waldorf University we devote a large amount of time to special teams play. We feel that special teams are legitimately one‐third of the game and create some of the biggest plays in the game. In our meetings, we often discuss field position as a direct result of the kicking game.

One of following three events takes place on every kick, all of which change momentum and determine a game’s outcome:

While all special teams are important, the bedrock is kickoff. We tell our kickoff team that we are the first defensive play of the game or the first play in second half. I end each kickoff meeting with two main points: keep the ball inside and in front of you, and never go past the level of ball.

With kickoff coverage, we aim to hold the opponent to an average field position of the negative 25‐yard line or an average return of fewer than 17 yards.

Speed Zone – From our 35‐yard line to approximately the 50‐yard line, we have three objectives.

Avoid Zone – From the 50‐yard line to the opponent’s 20‐ yard line, we have three objectives.

Tackle Zone – From the opponent’s 20‐yard line to the goal line, we have four objectives.

We keep our kickoff coverage consistent week to week. We utilize twists, move our “disrupter” positions and change the placement of the kick. We spend significant time on coverage drills and ensuring our players understand responsibilities and their fit. The coverage terminology we use correlates with what we teach on defense, keeping it easy for players when discussing tackling, leverage and block destruction.

We use a 5×5 base alignment (See Diagram 1). We place the ball in the middle of the field, giving us a competitive advantage of placement to any part of the field. Diagram 1 shows how we align our kickoff team. We can easily go 6×4 alignment and place the ball on the hash depending on the opponent’s personnel. 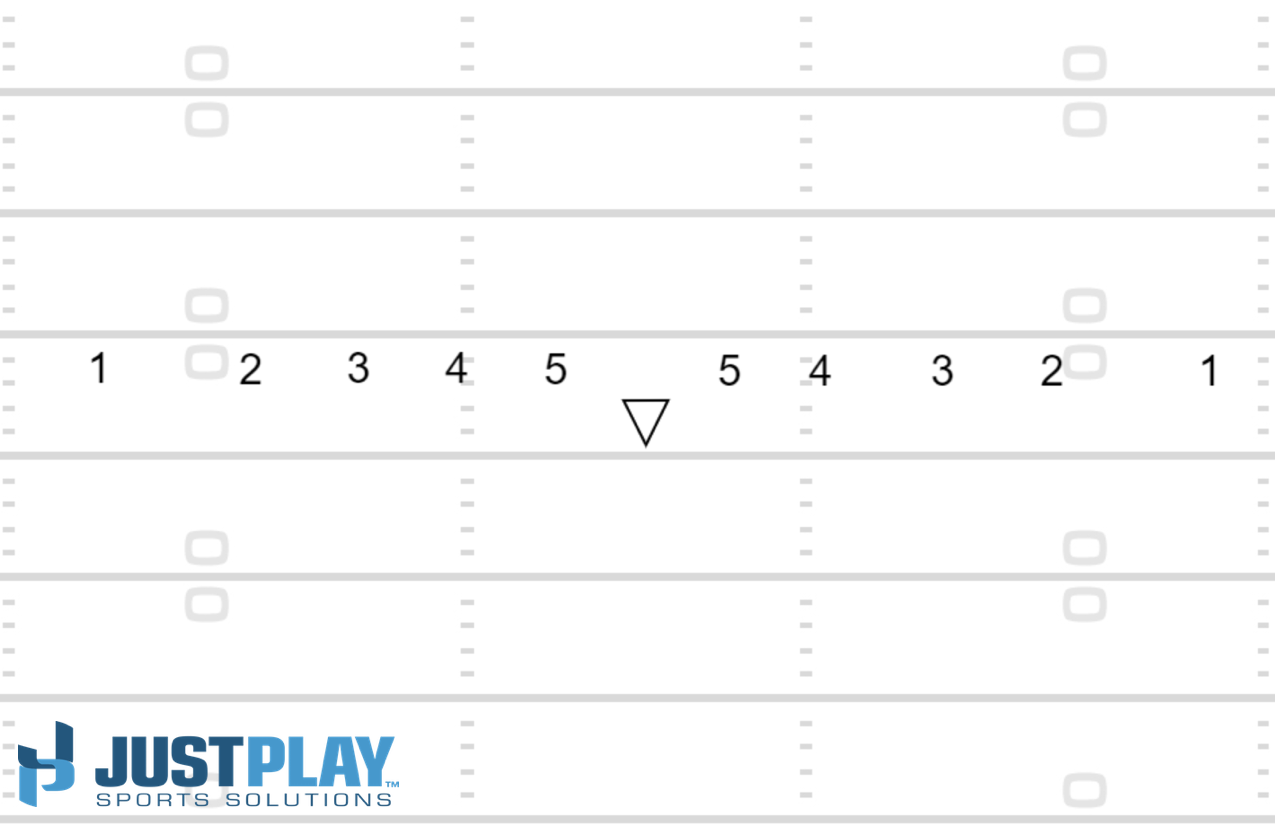 From base alignment, our primary call is deep left. We want our kicker to average a 3.75‐second hang time and kick it between the numbers and hash (See Diagram 2). 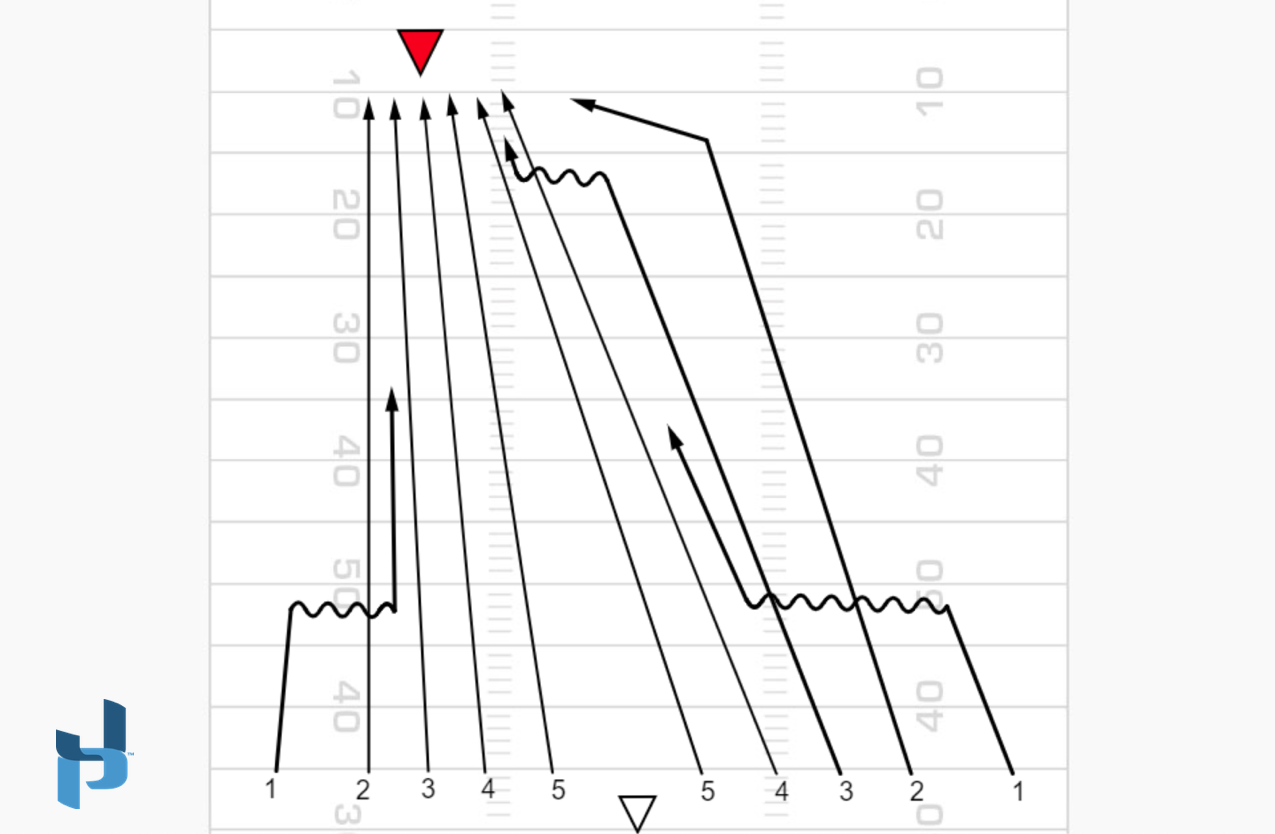 The 1s are second‐level “fold players.” They must sprint down the field until the 50‐yard line and then begin to fold behind and between No. 2 and No. 3. Our fold player must play off both of them.

If the ball bounces outside the No. 2 contain player, he must replace him and become contain. If return is away, look for cut back and pursue to the ball maintaining leverage on the returner at a 45‐degree angle. Use the safeties or inside linebackers for fold players. They understand playing off other positions and typically have the speed to cross the field for pursuit on a return away. Also, the No. 1 players make many tackles, so they tackle well in space.

The No. 2 players are “contain players.” They fly down the field and keep proper shoulder leverage on the returner. They must set the edge of the kickoff and not let anything outside. If the No. 2 ducks inside a block, then our No. 1 fold player will adjust and become the new contain player.

If the return is away, squeeze and get flat. Make a play from behind. We look at outside linebackers and safeties to fit the contain position. Someone who can set an edge and also split a double‐team.

We call both our No. 4 and No. 5 players “disrupters,” and they include wide receivers, safeties, or fast linebackers.

They must be fast and physical. We want our No. 4 players to go straight to the ball and take a shot. Our No. 5 players must play off No. 4 players and fill where needed. They must never follow a teammate down the field. These guys are fast, give effort and have a nose for the returner. If our opponent double‐teams our No. 4 players, we ad twists or move the No. 4 elsewhere. We practice this regularly and can adjust easily in‐game.

Our kicker is the safety and stacks over the returner. If the returner gets to our kicker, the kicker must tackle him or slow him down.

We perform this drill early in camp and continue to rep it a few times each week in practice through the season. The goal is simple: Be onside and practice your timing with kickers. We never want to be offside on kickoff. We get lined up and get our eyes to the kicker. I blow the whistle and the kicker starts his approach. When he is 2 yards in front of the coverage team, they begin a full sprint for 15 yards. A coach on each sideline checks players for offsides.

The Two Whistle Drill works the full operation of the kickoff team and its leverage points. We conduct this drill against air and have one returner back to work our proper leverage points.

On the first whistle, we get lined up and take the line full speed, making sure we are onside. We are looking for speed down the field; never follow your own color. As they come down the field and start to close in on the returner, we will blow the second whistle. The coverage team stops immediately where they are when they hear the second whistle. We first check shoulder leverage of the coverage team to the lone returner. Then we identify our disrupters, secondary contain, force and fold players, making sure they are in proper position.

We use the Gauntlet Drill to evaluate personnel for our kickoff team. We look for speed, first and foremost. We start this drill on the sideline and work across the field to the opposite numbers. We look at pad level, ability to stay in stride and quickness in the avoid zone.

Once they get through the Speed Zone we want to see them keep their speed and avoid a front‐line blocker. We use dip and rip to avoid and then stack the blocker (staying on‐ line) closing the distance to the returner.

When we get to the Tackle Zone, we shock and shed this blocker, accelerating our feet on contact, thumbs up and arms locked out. Our player violently disengages from the blocker and finishes with a tackle on the returner. We vary the finish with either a wrap‐and‐roll with a bag or fit up on the returner (See Diagram 3).

The Box Drill is our first choice when evaluating personnel for kickoff (See Diagram 4). It is a one‐on‐one competitive drill we use for a 5‐minute period once a week during the season. 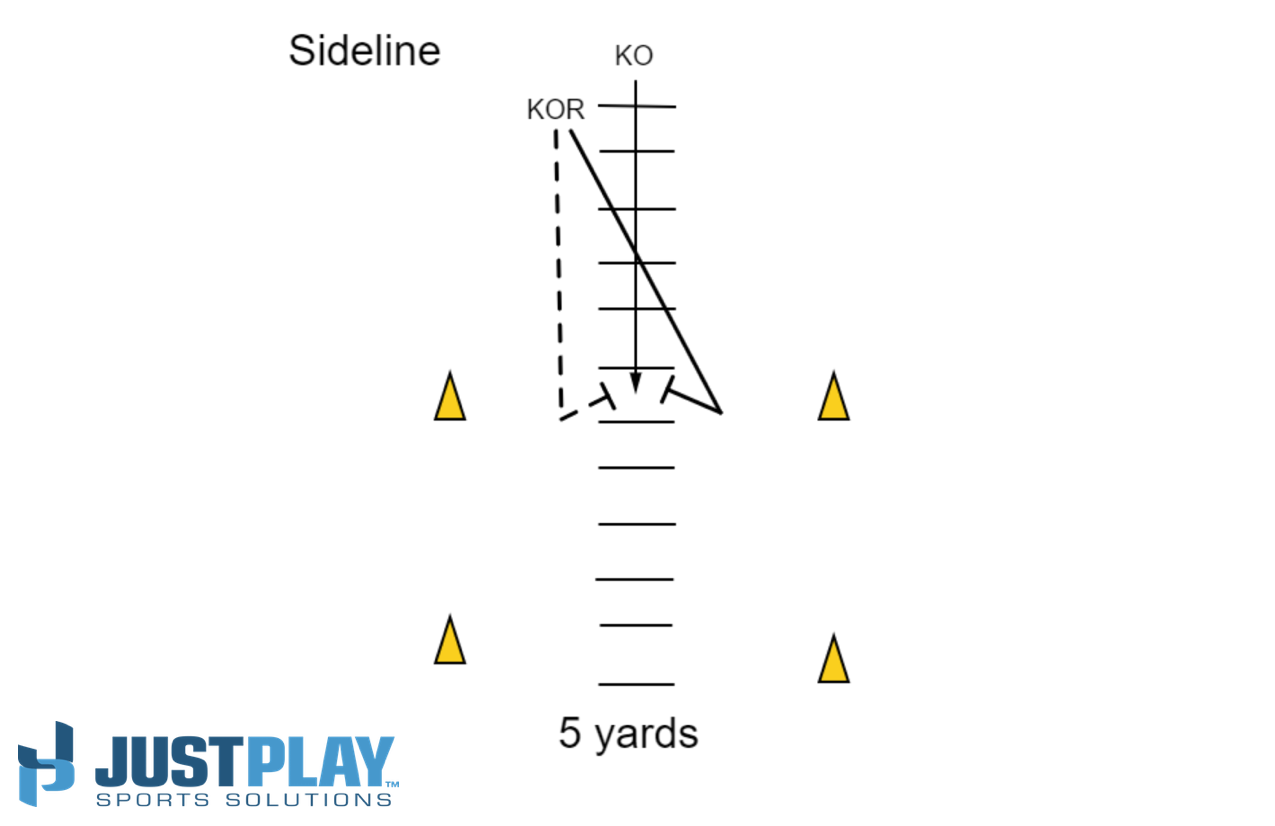 The kickoff defender aligns on the sideline and against the blocker 5‐7 yards away at a 45‐degree angle. This drill can become physical. It helps evaluate who can defeat or avoid blockers while staying inside the box.

This is a great drill to get a live look without going 11‐on‐ 11. The goal of the drill is for the kickoff personnel to defeat the blocker to the return side. It is a full‐speed drill where we want to maintain speed in the Avoid Zone.

They must recognize the return side based on the leverage of the blocker. We do this during camp and spring football. Reducing the field and amount of people allows for more coaching and ability to recognize talent on kickoff.

The coach lines up behind the kickoff team and points to where he wants the return to go. The kickoff team lines up on the 50‐yard line. Once the ball is kicked, get through the Speed Zone to the Avoid Zone.

We want our No. 4 players on kickoff to recognize the side of the return based on the leverage of the blocker. Once they recognize return side, they must defeat their blocker with speed or shock‐and‐shed. The kickoff return blockers must sprint to the 25‐yard line and then turn up to block their man (See Diagram 5). 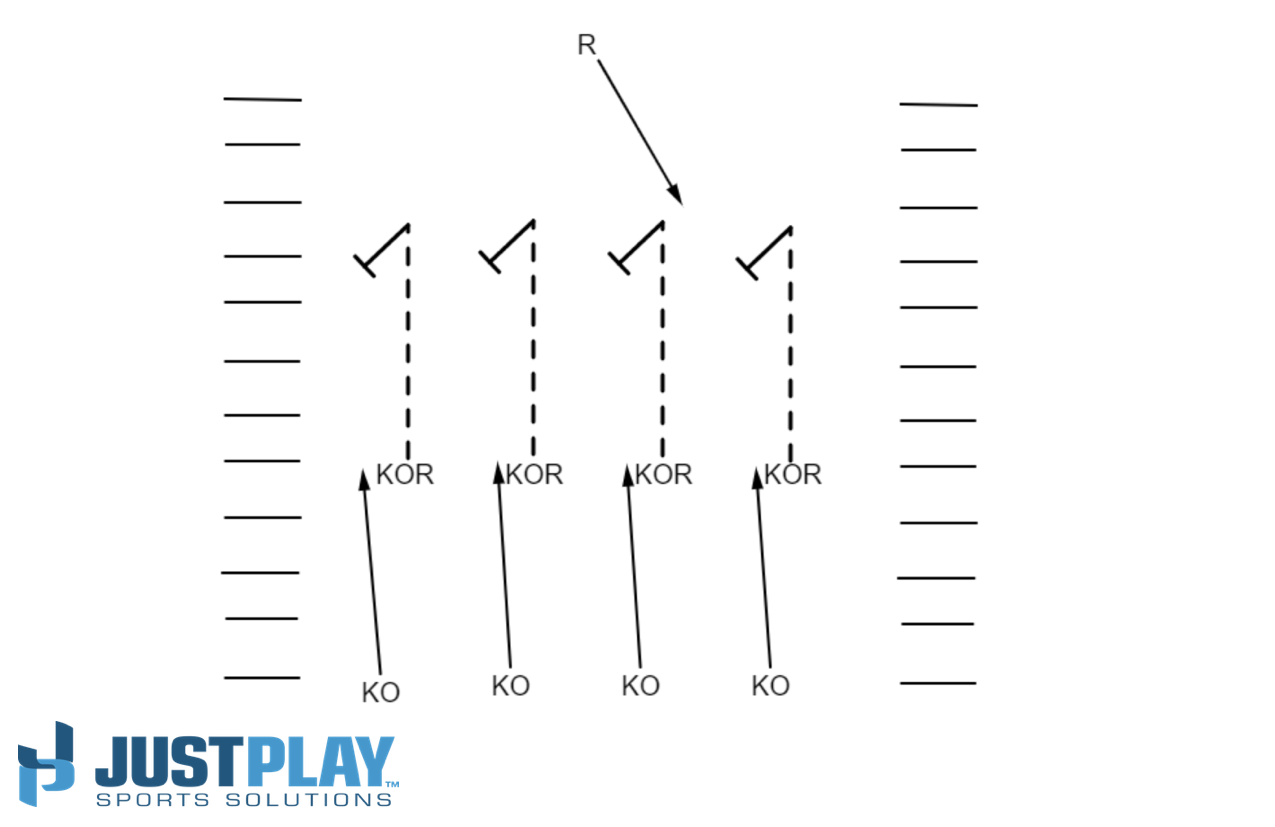 Special teams are extremely important and directly reflect the overall success of a team. The kickoff scheme and drills shared here create a consistent message — day‐in and day‐ out — for this unit. Field position and controlling the ball is paramount to the success of any program. It all starts with the kickoff team.

This article was written by Will Finley, Head Coach, Waldorf University. For any questions, he can be reached at will.finley@waldorf.edu.