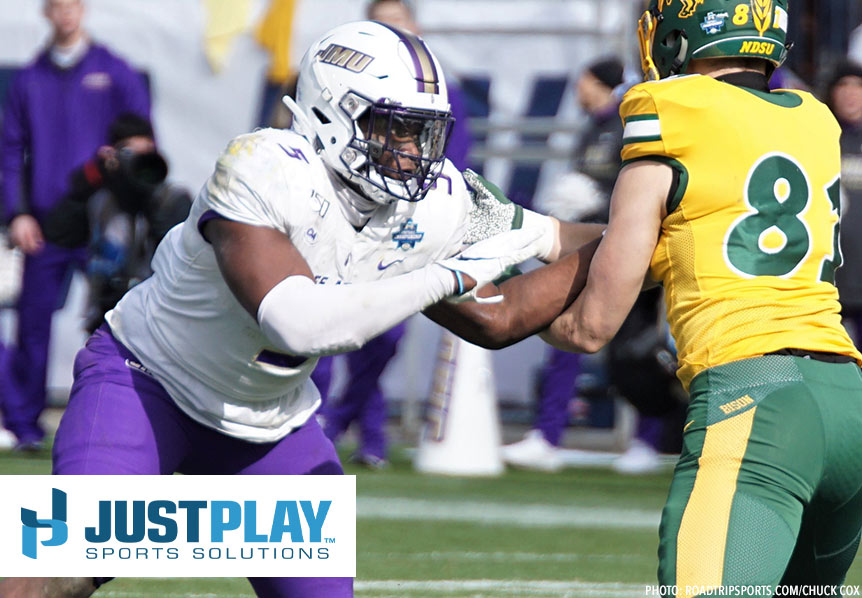 From my first introduction to the game of football, I identified strongly with the offensive side of the game. I started out playing offensive line in Pop Warner, and learned the fundamentals and techniques needed to protect the quarterback. In high school, I transitioned to quarterback and played that position through the remainder of my career. It wasn’t until I became a coach that I understood what it is like to be on the other side of the football. Now, as a defensive line coach and defensive coordinator, I love the challenge of finding ways to put pressure on the position I once played with an elite pass rush.

Each year, the first thing we teach at James Madison University is our Pass Rush Rules. The Pass Rush Lanes (See Diagram 1) that we teach are designed so the quarterback has nowhere to step up and no way to escape. Our rules are based on the number of defensive players who are rushing, and our defensive lineman must not only know their jobs, but also what the rest of the pressure looks like. 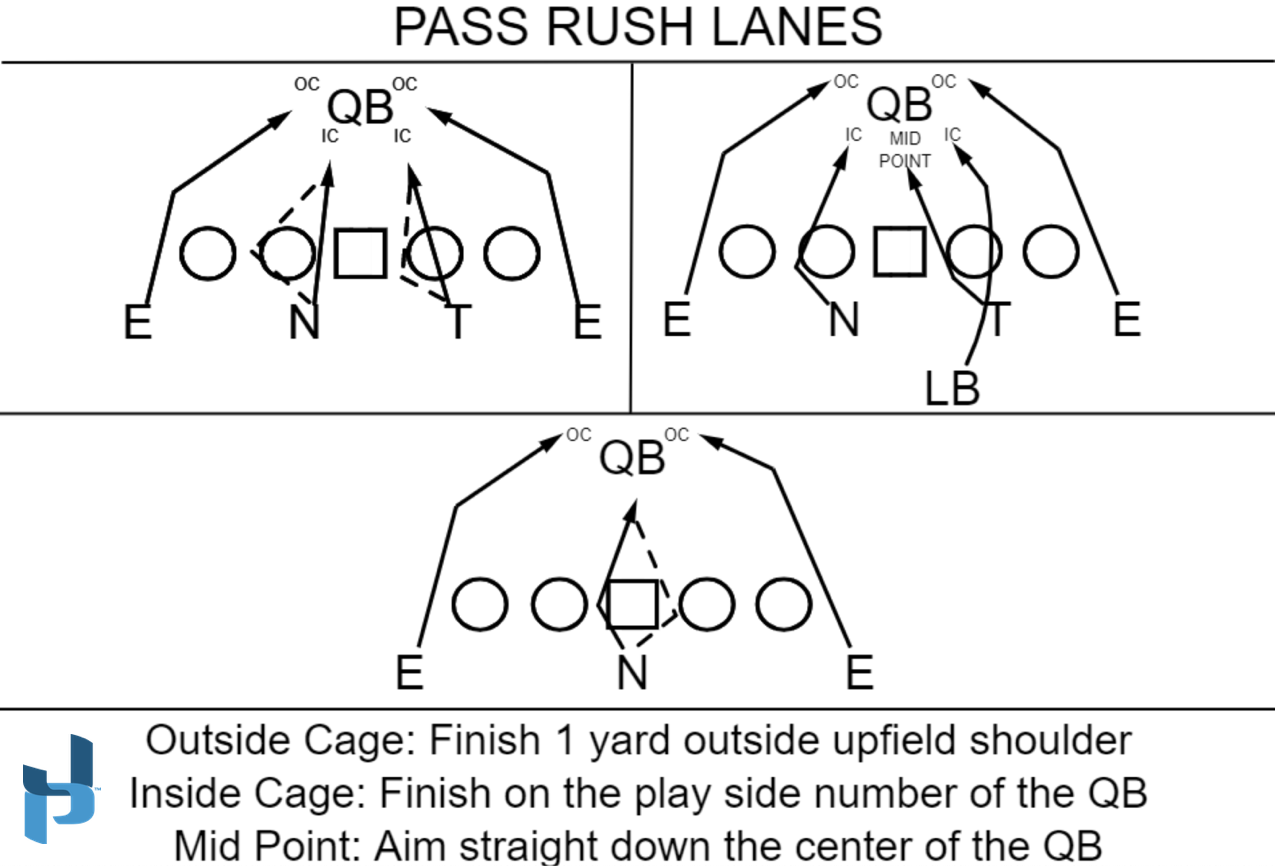 This system of rules allows us the flexibility to install new blitz patterns and line games each week without mentally overwhelming our players or losing contain of the quarterback.

Our rush rules create rush integrity for our defense, and we emphasize playing fast and physical without overthinking it. Seeking a straight path to the quarterback allows our rushers to not only pressure the quarterback, but convert that pressure into sacks and takeaways. Elite pass rushers have a chance to get to the quarterback every time he drops back. To become an elite pass rusher, players must focus on four aspects: eyes, get off, hands and finish.

The Eyes Have It

Each pass rush rep begins with the eyes, which should key on the near knee of the offensive lineman, while keeping the football in the peripheral vision. Film study usually tells us that the near knee is the first part of the lineman to move, thus giving us the quickest trigger to begin our rush.

Once the offensive lineman moves, the pass rusher’s eyes transition from the near knee to the near elbow to determine pass set. A square elbow indicates a speed move. If the elbow drops behind, the rusher must use a long arm. If the elbow crosses the rusher’s face, he must use a counter move.

Coaching A Great Get Off

After the pass rusher uses his eyes to see the first move of the offensive lineman, next comes get off. Anticipating the snap count, coupled with great eyes, delivers on a great first step. We use an attacking mentality and launch technique vs. the run game so the pass rusher’s first step will always be the same, whether it’s run or pass. We teach that there are two types of pass rushers: speed rushers and power angle rushers.

A speed rusher must achieve utmost vertical separation from the line of scrimmage, forcing the offensive lineman to move his feet, which places him in an uncomfortable position.

A power angle rusher creates separation from the offensive lineman, forcing him to stop his feet and dictate his lean.

Both speed and power angle rushers should win the rush at 4.5 yards deep (outside cage player) or 2.5 yards ( inside cage rusher).

Defensive linemen excel at using hands to create separation. We teach our players to have one speed rush move per side. They pick from a menu of moves that include swat salute, double swipe, club punch, club rip, cross‐chop rip and cross‐chop punch.

Every rusher is different and has different preferences based on his strengths. He may feel most comfortable using a club rip from the left, but a double swipe from the right, so we give him the choice. Once he identifies his move from each side, he works that move constantly during individual, one‐on‐one and team reps.

The target for a pass rusher’s hands is the area between the elbow and the bottom of the triceps/biceps depending on angle of approach. We preach: “Aim small to miss small.” The more we focus on our target spot, the better our rush will be. Even if a rusher misses with his initial move, if he stays square to the quarterback in his cage lane, he is in a great position to begin a counter move and finish the rush.

The final component to an elite pass rush is to finish. The pass rusher opens his hips, punches or rips through the offensive lineman, and makes contact with the quarterback. Every move a rusher works should always finish with a rip or a tight punch.

These four focal points produce elite pass rushes and elite pass rushers. While the focal points are specific to defensive lineman, we teach the cage rules and basic pass rush fundamentals to each of our defenders. Our linebackers and defensive backs are still expected to understand and execute the same techniques when we bring pressure in base or in sub packages. Teaching the same system allows us to keep it simple for our players and allows them to play fast and aggressive. The speed of the game dictates that everything our defenders do is reactive, and whoever reacts the fastest has the best chance of making the play. The less rules they have to remember in the moment, the faster they react and the more we win.

Corey Hetherman joined James Madison University’s football program as defensive coordinator and defensive ends coach in December 2018. In his first season, he guided one of the nation’s top defensive units, which led the FCS in total defense (270.2) and first-down defense (14.56) and ranked third in rushing defense (74.8). For questions, he can be reached at hethercj@jmu.edu.