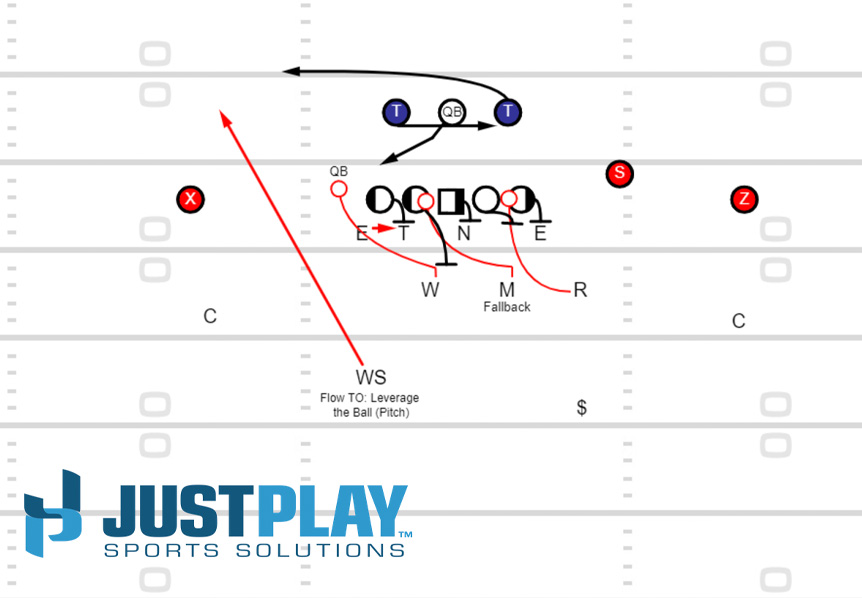 At Wake Forest, one way we try to combat the challenge of keeping things simple while remaining complex is by having a few select defensive “automatics.” Automatics are overrides for the defense that account for a specific formation, situation or offensive backfield. If a team does not show a lot of one formation or backfield set or if your defense rarely finds itself in a given situation, having a solution to the potential schematic problem – that players can easily identify, check and be comfortable with – is paramount. Automatics allow defenses to spend the majority of the time game- planning offensive nuances that players will feel comfortable combatting in order to find success.

At the same time, automatics also allow players to confidently be in position to handle some of the exotic sets they may face because the automatics have been practiced throughout the spring and fall.

With that in mind, it is critical not to have too many automatics in your system because your defense can become too predictable. It is important to have the ability to check in and out of each automatic. For example, if an offense has two snaps of “Gun-Split” in a seven-game breakdown, you can be comfortable going into that game with an automatic for it. However, if the offense decides to major in that set during the game because of the automatic call, the defense must have a mechanism to play other schemes to switch it up. If not, the defense becomes predictable and easier for the offense to attack.

The criteria needed to implement automatics is a decision every staff will need to decide on its own, but the effectiveness the calls can have, in my opinion, is dependent on how the staff chooses to enlist them within its respective defensive structure. Carryover means everything to defensive players. Oftentimes, position coaches will use the phrase “same as.” How many “same as” defenses can you implement so that players have a strong, fundamental understanding of the concept that will allow them to play fast and aggressive, while also providing them with the best chance for success?

Defining Gun-Split: What, When And Why

One automatic we use often at Wake Forest is our base Gun-Split check. First, we need to define what we consider Gun-Split. Most teams in the ACC are 11- or 12-personnel offenses. When we talk about Gun-Split, we are talking specifically about 20 pony personnel or two-tailback offenses, where both tailbacks are aligned offset in a position to receive a handoff on either side of the quarterback. (See Diagram 1) 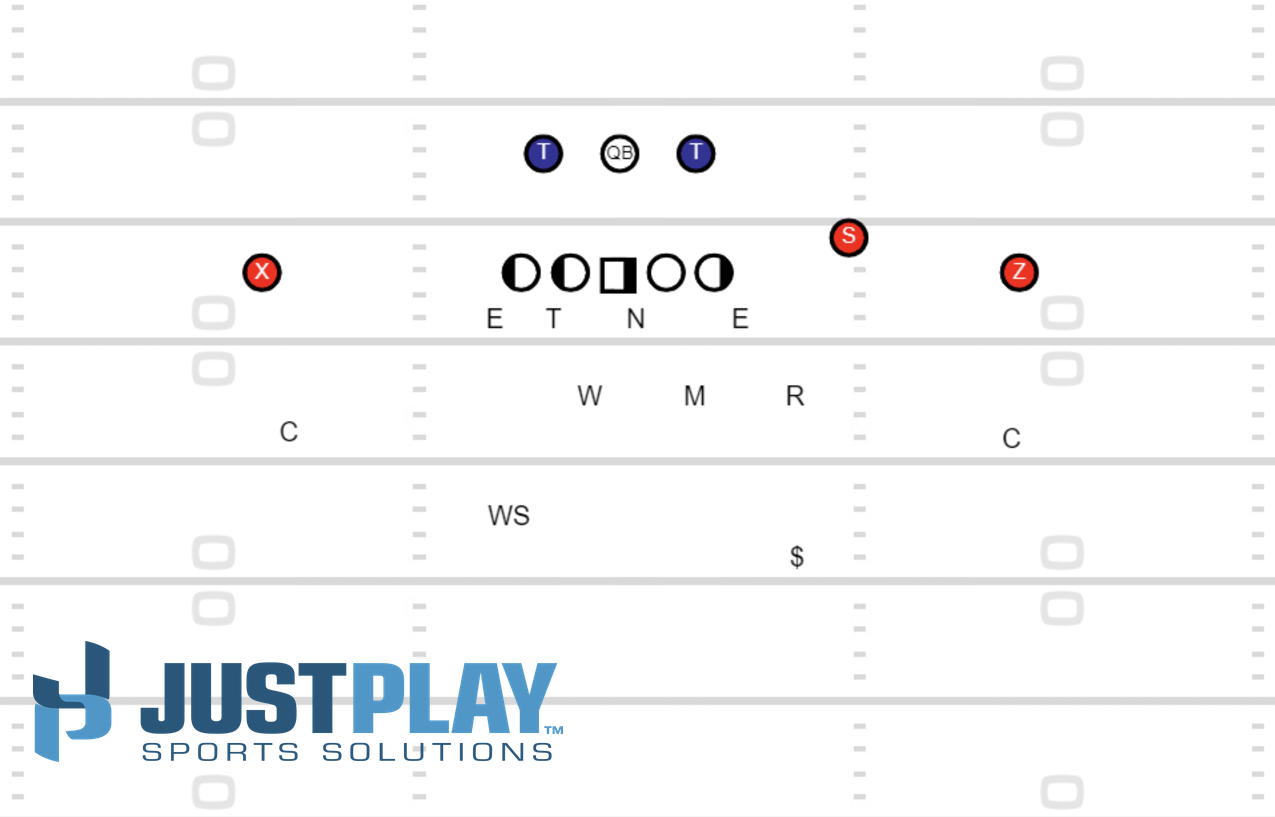 As a staff, we must discuss if we want to automatic into our check should a team create a Gun- Split backfield set with non-20 pony personnel (wide receiver or tight end aligned in the second running back position), but most of the time, this will not trigger an automatic response. The thought process is always: What is the offense trying to accomplish by creating this set? If it is not a true two-tailback set, the play type is usually much different.

Most offenses we face that implement 20 pony personnel sets try to accomplish one of the following:

Our base Gun-Split check fundamentally fits into what we already do as a base defense (four down, under front, quarters team). We like our base Gun-Split check because it allows our defense to have an extra defender to account for the quarterback outside in. We will defend the run from the inside out and have a leveraged second- or third-level defender to account for any read element from the quarterback. This is our go-to answer against designed quarterback run teams.

If the quarterback is not a running threat or the offense does not incorporate any read elements, we will most likely decide to play another defense to match this set.

Additionally, many teams offensively look at quarters as a great way to take an individual deep shot matchup on the perimeter. Depending on what a team will do out of this set may determine whether to close the middle of the field to counter those deep shots.

If that is the case, this check will not be the best fit. However, if you play quarters in a two-by-two set, you have already identified the safety on a slot receiver as a matchup you are comfortable with. If you are prominently a quarters- base defense, this check aligns strongly with what you already do and allows a defense to get the numbers you need.

The weakness in our Gun-Split check, as I mentioned, is downfield shots on the perimeter. In the end, we often decide to stick with the check regardless of whether the offense is showing this look because it is very sound against the run, our players are comfortable executing it and there is a lot of “same as” carryover to what we are already doing in other formational sets. If you have the confidence in your secondary to play the ball downfield from an off position, there really is no disadvantage to this check. It is imperative to always understand the weaknesses and strengths of every check we implement. This allows us to have the complementary pieces in place to counter an offense’s attack after having adjusted during the flow of the game.

The hardest part of defending a Gun-Split formation is when teams utilize quarterback-designed zone runs with a read element. That challenge is gaining the extra number advantage. The formation gives the offense the ability to redistribute post-snap in both directions. The offense will be able to see the numbers the defense shows and create the advantage in their favor.

Most offenses operate out of a two-by-two or three-by- one set via a formational distribution prior to the snap. Once a team gets into the Gun-Split formation, they can create one of those sets post-snap. Therefore, our Gun-Split check specifically accounts for this, allowing our defense to get our numbers distributed post-snap so we maintain the leverage advantage on a quarterback.

First Level: The defensive line will be in base and the ends will play what we call a pin-the-hip technique (PTH). Against any offensive tackle veer release, the defensive line will close the space and play the C-gap (jump cut the running back to the inside part of the quarterback, spill all pulls). The interior defensive linemen will hold their leverage in their respective gaps. There will always be the freedom to incorporate some type of line movement, twist, stunt, etc. if you think it will help against the plays you are trying to defend.

Second Level: The linebackers will execute what we call a “rake fit.” For every run fit we install, there are some constant elements we must always address (definition, explanation, alignment, key, reaction).

The overhang defender will leverage the ball and force any lead blocks unless he sees fallback. (See Diagram 2) 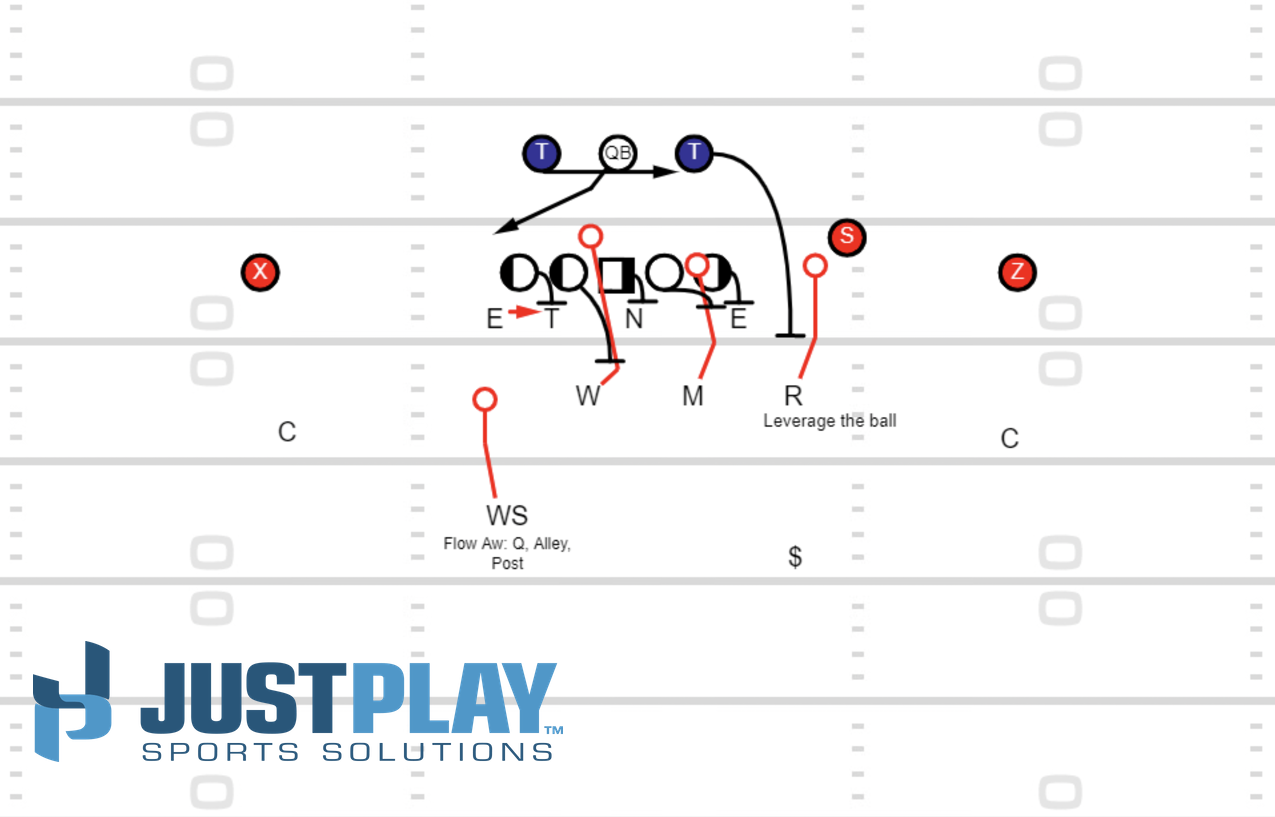 Fallback is defined as No. 3 against the zone. If No. 3 is into the mesh and the zone is weak, there is no fallback. (See Diagram 3) 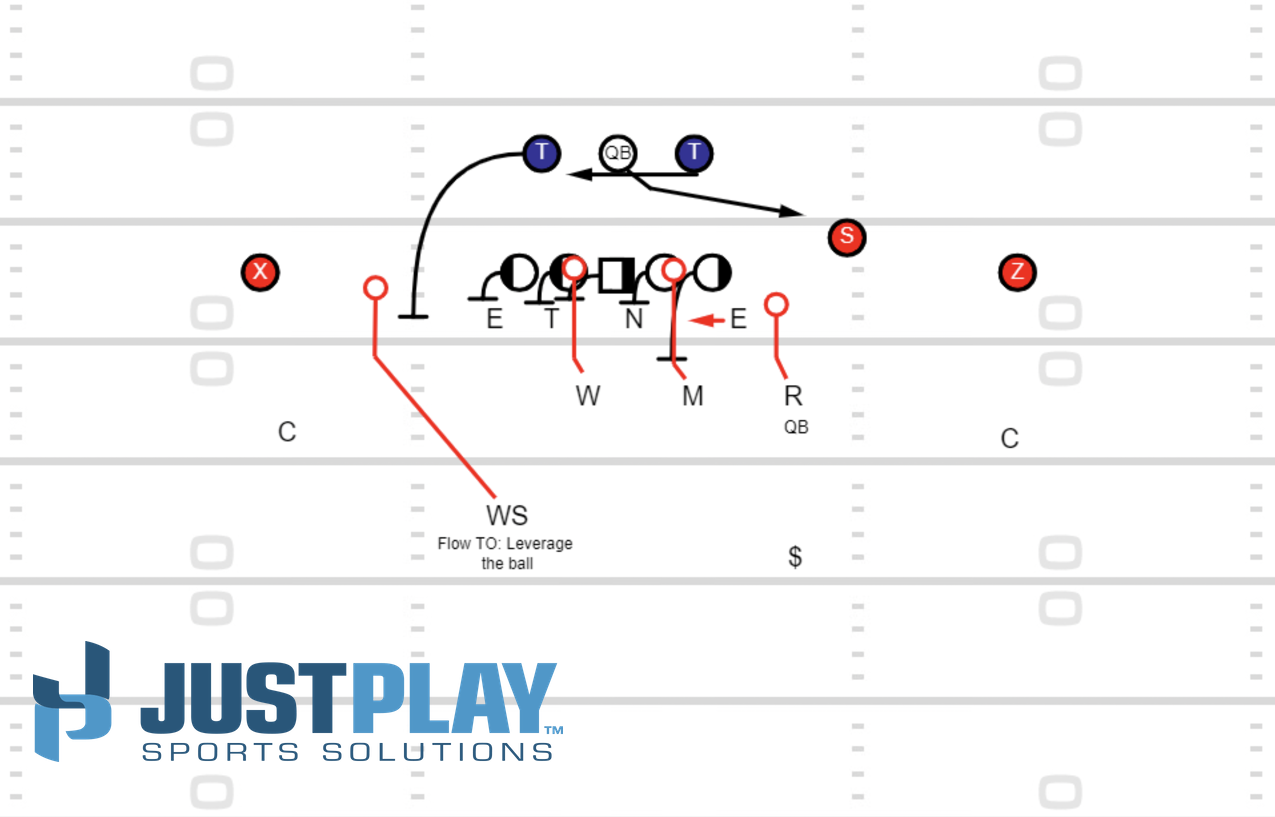 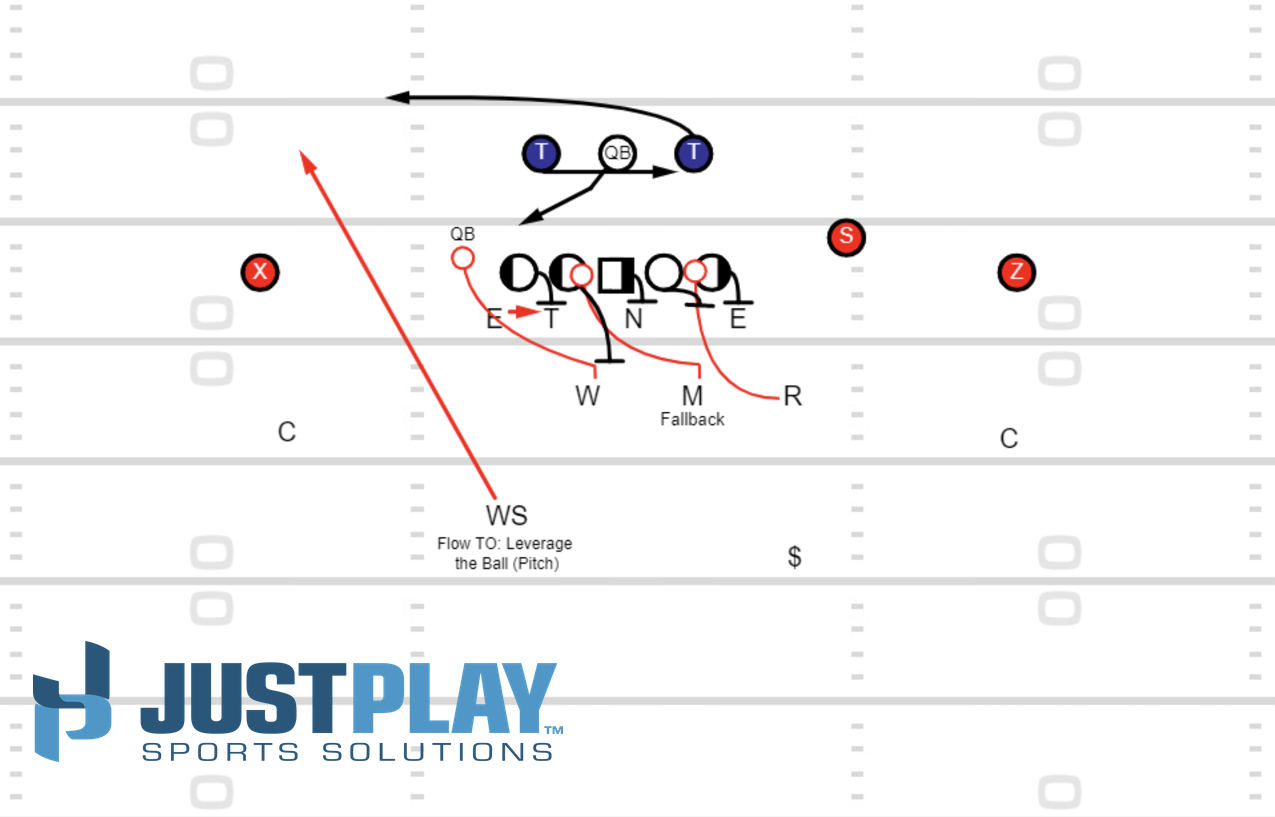 Third Level: The safeties play their traditional quarters run designations. The safety to the two-receiver side is playing his usual support calls and off-quarter technique against the slot. The safety to the one-receiver side is playing the quarterback, alley, to post. He is reading the mesh player vs. flow away — check the quarterback, run the alley, get into the post on a pass. Flow to him — leverage the ball (pitch) or force any lead blocks.

This example of an automatic is a simple adjustment that allows us to minimize the amount of teaching we have to do during the season and enables us to defend a set that is not confidence.