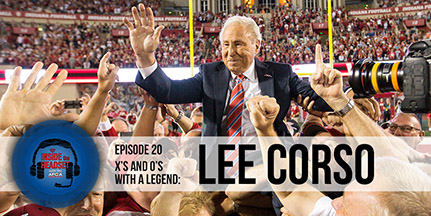 Few people can rile up a fan base in the manner Lee Corso manages to every Saturday in the fall. Since 1987, he has served as an analyst on ESPN’s College GameDay, and his headgear selection has captivated audiences for over two decades. The AFCA Magazine’s Paul Markgraff was able to catch up with Corso to talk about his coaching career, which included nine years leading the Hoosiers at Indiana University.

When asked what got him out of bed every morning, Corso was quick to point to the relationships he developed. “My relationship with my players got me up every morning. The walk-ons, the managers, the people in the program—that’s what kept me going.” This past season at the Ohio State/Indiana game, Coach Corso was honored at halftime. “Ninety-one players I had at Indiana showed up. That was one of the great thrills of my life.”

Throughout the interview, Corso shared the message he tried to impress upon his players: “Never prostitute your integrity to get a job or to keep one. I taught that to my players the first day. If you ever do prostitute your integrity, you’re finished. That was not a football lesson, that was a life lesson. If you ever do that, it always comes back to haunt you. You might get ahead sometimes by doing it, but you’ll fail eventually. That was the only lesson that I wanted my players to learn from me. The only one necessary.”

Regrading how toughness is often interpreted differently between coaches and fans, Corso offered his spin on the definition. “I never wanted [my players] to quit. Toughness was the part about never quitting. Never quit. The greatest compliment a coach can have — the greatest one — is their players play hard for them.”

Tying back to his message about maintaining one’s integrity, Coach Corso provided a key example from his own career. “I was a head coach for 17 years in college football. I never had an NCAA investigator talk to one of my players. Not once. I got fired, I wasn’t a winning coach in a few places, but I’m proud of that. Never once.”

A Sense of Humor

After being on television for 30 years, audiences have come to love the passion and energy that Corso displays on a weekly basis. He also isn’t scared to take away from the seriousness of college football. “Humor is not a sign of weakness, in fact, it’s the greatest strength you’ve got. [Coaches] are afraid to have a sense of humor. They’re afraid they’re going to be criticized by the media or some other coach. It’s not brain surgery, have fun. If you’re doing something as hard you can, and enjoying it, and not cheating in any way, shape, or form, you can have fun. The guys who don’t are always looking over their shoulder. ‘When am I going to get caught?’ [They’re] winning, but it’s not worth it. It’s not worth it to cheat and be a winner, because eventually you get caught. Eventually.”

Corso closed out the interview by giving his advice on what coaches are currently doing that they should continue. “Keep teaching the players life lessons. Ninety-one of [my players] came back to come see me [this year]. I can’t tell you how much that meant to me. I got hundreds of calls from everybody saying why they couldn’t be [there], but ninety-one of them showed up, paid their own way, and bought their own tickets. Indiana was very gracious to me.”

Check out the full interview from the AFCA’s Inside the Headset podcast at the top of this page.

This article was written by Alec Finch, Graduate Assistant for the AFCA.

Have any questions, comments or ideas for Inside the Headset? Send us an email at podcast@afca.com.