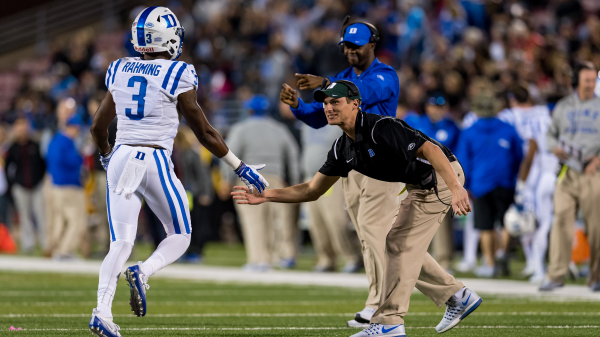 Our Approach: Setting the Duke Standard and Working Backwards

Our staff begins by defining a junction point. For instance, for a run block our definition would include the ideal fit and body position. On a pass set, the definition adjusts to include weight distribution and body position combined with punch and hand placement. Once players have a visual of the ideal way to engage junction points, our staff works backwards all the way back to the initial stance and footwork. We emphasize our Duke Standard at each step, which allows our players to engage junction points properly; this systematic instruction, allows players to assign context to each step and ask questions that are more specific.

Our Duke Standard creates the perfect fit by establishing leverage in both the lower and upper body combined with playing underneath our defender. Starting with the lower body, we must play with a base (feet slightly wider than shoulder width), knees inside our feet, with all of our weight on the inside part of each foot. In order to create power, we must have our hips in front of our feet. My favorite example to give our young players regarding creating power is asking them to stand up and demonstrate how they would push an eighteen-wheeler up a hill. In order to push an eighteen-wheeler, drive a sled or create movement in the run game, you must get your hips in front of your feet and run your feet with a base. Regarding the upper body, we want our chest down, eyes and head up, combined with tight hands and elbows.

Our first step is the Fit & Finish Drill: we put our player in the perfect fit as described above (against a player providing resistance with a flat pad) and on my command the player runs his feet while maintaining his low pad level and leverage with a base. To help teach the importance of his base, we will conduct this drill with a board between both players’ legs.

Our second step is the Roll & Run Drill: we back up the resistance player holding the pad to a yard away, the player working the drill will start in a two point stance and on my command will lean until his hips are clearly in front of his feet and begin to run his feet. We then want the player to activate his hips by “power cleaning” through the pad, punch with tight hands, and accelerate through the pad, all while maintaining that great base and low pad level. Going from step 1 to step 2, the player must learn not only how to get his hips in front, but also how to punch his hands, while accelerating his feet.

Our third step is the Hit on the Rise Drill: this drill takes us from the start of any play and will culminate in the perfect fit and finish, or our Fit & Finish Drill. The player will start in his stance as it would be on the play called. On my command the player will work his run game footwork en route to the defender holding the pad. He will create the junction point with his hips in front, with both upper and lower body leverage, and accelerate through the defender. This can be altered to work any run scheme (base blocks, backside of inside zone, inserts). This drill, unlike the previous two, helps teach initial run footwork and also forces the player to maintain his pad level for the amount of time required for a play in a game.

Our Second Junction Point: Using Size to Create Separation at the Top of the Route

Our Duke Standard is keeping the defender as close as possible at the top of the route to generate the most power possible before breaking to create maximum separation. The more I can get into the defender’s body, the more control I have over him. The defender wants to keep himself at a safe distance, with his hand on the route runner’s body, allowing the defender to grab (preventing separation) and minimize the effect of any strength or size from the route runner. An example I often use with our young route runners would be the speed of the bar on a power clean. The bar moves much faster, creating more force and power, the closer you can keep it to your body. This example also reinforces how explosion and separation are created from the ground up. Keeping the defender close will allow greater separation, regardless of which direction I am breaking.

Our third step is our Combat Circuit Drill: this drill takes us from our stance and release all the way through the top of the route and catch and finish. Here we will have two defenders helping with the drill: the first will run with the route runner, forcing him to work his clubs or wipes, until he reaches the second defender, who holding the pad, the route runner will lean into, “Own the Line” before fighting pressure and snapping his route off. We will end the drill again with a catch and a finish back vertical through our finish cone. As with our Hit on the Rise Drill, our Combat Circuit Drill takes us from our alignment before the snap and goes step by step to help our players’ understand how to accomplish our Duke Standard of using size to create separation.

Our Third Junction Point: Using Power Angles to Create Separation at the Top of the Route

Our first step is our Spring Drill: we put the route runner in the Duke Standard power angle position at the top of a curl route (as described above). We want him to feel just how much he must sink his hips to get into this ideal power angle position. On my command, the route runner will drive off his already loaded outside foot, bursting directly to me (simulating a curl break) while maintaining low pad level. We want this action to be as efficient and explosive as possible. On his way to me, I will throw him the football, and the drill will end once he tucks the ball away and turns up to finish through our finish cone. By starting them in this Duke Standard power angle position, they gain confidence as they see how explosive they can be out of their route breaks, further reiterating how critical it is to reach this body position at the top of every route.

Our third step is our Run to Spring Drill: this takes us from our alignment before the snap all the way through the top of the route, catch and finish. We start the drill in our stance that our tight ends and receivers will take every time we are aligned out wide. On my command we will burst off the ball with our eyes up and chest down, run through the second cone before snapping our hips and chest down, creating power angles and bursting back to the quarterback. We will finish again with a catch, quick tuck and burst up the field through the finish cone. As with both our Hit on the Rise Drill and Combat Circuit Drill, our Run to Spring Drill takes us from our stance before the snap, step by step to reach another Duke Standard, helping us find power angles and create separation at the top of our route.

Jeff Faris joined the Duke staff in July of 2012 and coaches the tight ends while also serving as the Recruiting Coordinator for the Blue Devil offense. Faris served as a graduate assistant coach for the 2012 and 2013 seasons before being promoted to assistant coach in March of 2014. He coached Duke’s wide receivers from 2014-17, prior to transitioning to the tight ends and adding recruiting coordinator duties following the 2017 season. Faris was also selected to participate in the 2017 AFCA 30 Under 30 Coaches’ Leadership Institute.