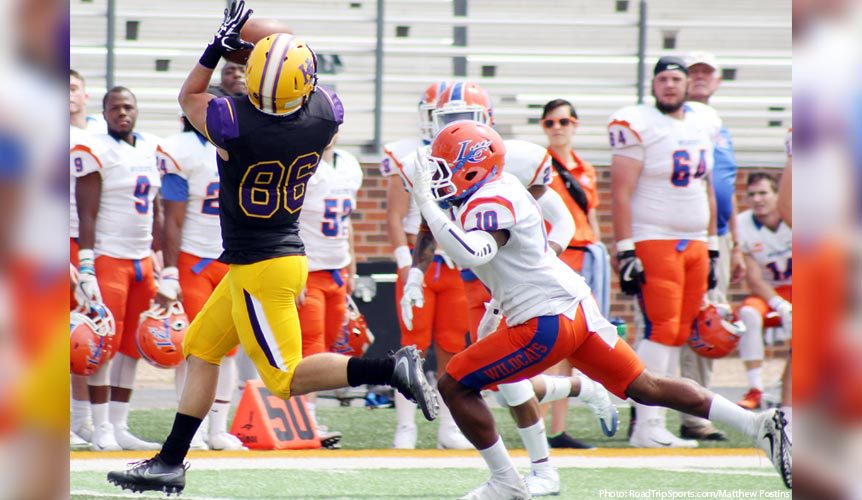 In today’s football world, defenses have become more exotic with their schemes in an effort to keep up with the ever-evolving, high-powered offenses prevalent at all levels of the game. As a result, defensive backs are being coached and trained at a much higher level than ever before. No longer is that position just a “guy who can backpedal, turn and run” position. Today’s defensive backs (DB) have become more technicians than anything else. This is why proper release is so important.

Editor’s Note: In Part 1 of this wide receiver series, we covered “WR Stance and Start.” In this part, we will be talking releases.

To quote one of my coaching colleagues Marc Bacote, wide receiver coach at the University of Richmond, “You have to give your receivers tools to add to their toolbox. They may not use them all – but you must provide them with answers to all the different things they may see.”

The type of release a receiver utilizes varies based on two things:

The very first thing that we stress to our receivers is that “YOU WIN AGAINST PRESS COVERAGE WITH YOUR FEET.”  This means that in order for you to win against press coverage, a receiver must move his feet to move the opposing DB off his spot.

Many times, you see receivers work the “foot fire” technique and not make any movement or progress up field to threaten the defender. Most defensive backs have been taught to be patient and key a receiver’s hips or shoulders.

As such, if a receiver essentially stays in the same spot buzzing his feet, the DB is going to hop or buzz his feet patiently and attack the receiver’s first up field movement.

With that being said, a receiver’s job begins by watching film and learning what style of CB he will be facing. While scouting his opponent, the receiver must as several essential questions:

All of these questions can be answered through film study. Once a receiver understands what he’s facing, he can begin to formulate a strategy for all the types of releases he needs to utilize in the upcoming game.

In most cases, although they are different coverages, it does not change much of what the WR will see from the CB in terms of how he’ll defend.

In Cover-0 and Cover-1 coverages, you will possibly have a defender walked down into tight coverage. Here is where a piece of what was covered in part one about stances comes in to play.

The receiver’s legs should not be split so wide apart that he’ll have to make a big movement to get to balance before making a move.

As also discussed in part one, the WR’s hand placement plays a big role in his success in winning the route. The receiver’s hands should be as high, or higher, than the press defender he is lined up against.

I explain to my receivers that getting off press coverage is nothing but a “street fight”. If you were getting ready to fight, you would not have your hands down by your waist or crossed and resting on you knees. With his hand’s up, the receiver is now prepared to fight off and jam from the CB.

Speed Release: This type of release is used against CBs who are less physically aggressive but are walked down in tight coverage. I explain to my WRs that anytime a CB walks down in press coverage but does not jam you, it is now a race that you should win because you are going forward and he is going backwards.

The route the receiver is running will dictate whether he takes an inside release or an outside release.

In coaching the “speed release,” our goal is to have the receiver work “a half a man” – meaning that he is either attacking the DB’s outside shoulder or inside shoulder, depending on what type of route he is running.

If the receiver is running a route that requires him to take an outside release, he is taught to come off the LOS as fast as possible.

This is the point where “using your tools” comes into play.

“In-Out-In” and “Out-In-Out” Releases: When going against a press corner, now THIS is where the fight begins. The first release is “in-out-in” or “out-in-out” depending on which way the receiver needs to release according to his route.

In a lot of instances CBs are taught to give a receiver the first move, in order to get a read on what he is trying to do and then react to the second move.

So on an “in-out-in” release, the receiver is essentially attacking where the corner can’t let him go. This means that against a Cover-0 and Cover-1, a CB usually aligns to stop the receiver from taking an inside release because he has no defensive help inside.

This also goes back to Part 1’s discussion about not being locked in on which foot is up. I always tell my receivers to break the huddle with a plan of attack based on the route that he will have.

If the receiver is trying to get inside, he must position his outside foot up. His first step is taken with his inside foot moving toward the inside shoulder of the cornerback, which usually forces the DB to shuffle and/or shoot his inside hand.

The corner will almost always then step back outside, which is the move he reacts to in order to close the gap of space between himself and the receiver.

The receiver must be taught that at the point in which he gets the corner to turn and attempt to close the space – this is the moment the receiver utilizes a club move with his inside arm and punches through with his outside arm to clear any attempted jam by the cornerback – while working back across to get up field and back on top of his original alignment.

When facing Cover-2, one of the biggest keys is for the receiver to know the types of release he’ll be utilizing and understanding what the coverage is trying to dictate to him.

Knowing the responsibilities of the cornerbacks and safeties tell a receiver what will be given to him.

The majority of the time, a receiver is facing a CB who is positioned about 5 yards off of him and sitting head-up, or facing toward the outside half of the receiver’s body.

The CB’s responsibility in Cover-2 is to force the No. 1 receiver inside, toward the safety, while keeping his eyes on the No. 2 receiving threat to his side of the field – no matter if it is a slot receiver, tight end or running back. From there, the CB is instructed to follow these two rules:

Knowing that the CB’s strategy, then the worst thing that an outside receiver can do is to automatically release inside, which carries the cornerback’s eyes immediately to the No. 2 receiver. (This kind of mistake is what leads to kill shots by the CB on a defenseless teammate.)

I tell my receivers that no matter the route, against a Cover-2, it is a MANDATORY to utilize outside release.

We teach receivers to press the cornerback’s outside shoulder to the “point of no return.”  If the CB allows the receiver to go outside, then he should take an outside release.

Based on the CB rules for Cover-2, if the receiver uses an outside release, the corner must turn and run with him – which leaves the flat vacated.

If the CB does not turn and runs at the 12- to 15-yard range – then the receiver must look for a “hole-shot pass” coming to him from the quarterback. That depth is usually deep enough to be beyond the corner, and yet, just shallow enough that the safety can’t make a play on the ball.

If the receiver presses the CB’s outside shoulder and the defender continues to widen, the receiver can release inside, as long as he gets up field immediately and does NOT come back inside of his original alignment on the LOS.

Release Vs. Cover-3 and Cover-4

There is not really much to write about releases to use against Cover-3 or Cover-4, because they are usually “off coverages.” The most important part to running routes against these types of coverages is the concept of “getting even with the DB.”

If the corner is in an inside or outside shade, it is important for the receiver to run at him. Most coaches refer to this as “stepping on the DB’s toes.” I call it “getting even with the CB” because once the receiver is squared up with the DB, the DB must either flip his hips to either side, or turn and run, which allows the receiver to move him by either stemming his route, using simple head movements or by getting in and out of his break.

If the receiver is running a curl route, for example, and the DB is lined up at 7-yards with an inside shade, then the WR is taught to run his route straight without running at the DB, as doing so puts the DB in position to break on the ball and make a play.

If the WR runs at a DB who is in the same alignment, then once he reaches his break point, the DB is now forced to go through the WR’s back to try to make a play on the ball – a scenario that the WR will almost always win.

This article was written by David Porter, wide receivers coach, Newport News Apprentice School. It is part one of a four-part series on coaching the wide receiver.