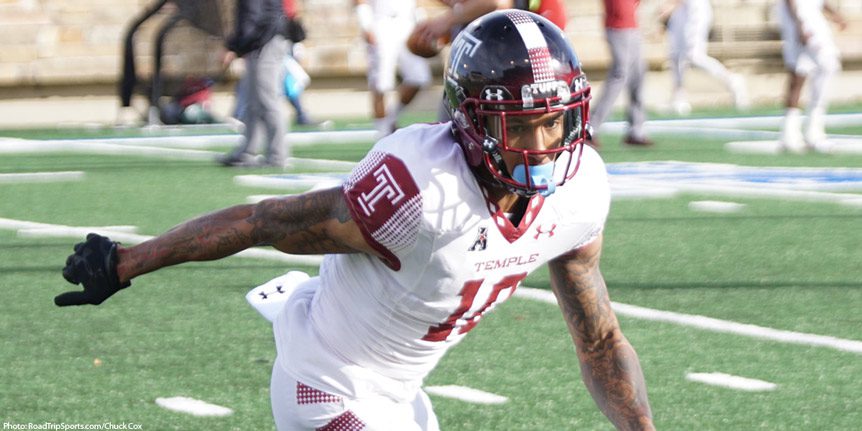 In today’s game of football, there are many different styles of offenses. From recreation league all the way up to college, you have coaches running the Wing-T, the spread offense, pro style offense, or RPO-based offenses. Each of these many different styles of offenses ask the wide receiver to carry out different task. How your offense uses wide receiver personnel determines how you must develop them.

I’ve seen many instances from youth league all the way up to college where teams do not have one particular coach in place to solely coach the wide receivers. There is way more to wide receiver than being fast and catching a football.  The first step in developing the wide receiver calls for you to identify what you are looking for.

Once your offensive staff decides on the offensive scheme, you can then begin preparing your wide receivers accordingly.

I ask them to imagine that they are down in track blocks and stand straight up. Depending on what it takes for these guys to be comfortable, there may have to be some adjustments made to how far the front leg is forward or how far the back leg is back. I have them to revert back to elementary school physical education class and ask them “what is your athletic base?” The response will usually be “feet shoulder with-apart.” I explain to them that this stance is no different and their feet should be shoulder-width apart.  There should be some bend in their front leg, which is where majority of their weight should be distributed.

Some players are particular about which foot that they want up and back. Most wide receiver coaches prefer that their players have their inside foot up for quick-game purposes. Examples of the quick-game routes are slants and quick outs, which usually are three- or four-step routes. It doesn’t matter to me which foot a wide receiver has up, but I do need him coming out of his break when the quarterback is ready to throw. I often tell our guys to switch up their feet to hide tendencies. In our offense, all of our routes are based on yards, not steps. The number of steps that it will take one guy to make it to 10 yards will be different from the next guy.

My next point of emphasis is the front toe. A lot of wide receivers – for various reasons – will have their front toe turned inward. After watching numerous wide receivers roll out of their stance, I have found that for guys who turn their front toe inward, their first movement is to turn that front toe straight. That is another wasted motion that should be eliminated.

While watching the wide receiver come out of his stance, you may see him “drop” his back leg to get moving forward. To prevent that, I tell those guys to go ahead and bend it now. It eliminates another false movement that will slow the release off the line.

All of these elements of stance sound like small things, but once your student-athletes line up against a press corner, the last thing you want to see is three to four false movements before they begin to take steps out of their stances. In part two of this series, I will cover a few of the various types of releases.

This article was written by David Porter, wide receivers coach, Newport News Apprentice School. It is part one of a four-part series on coaching the wide receiver.