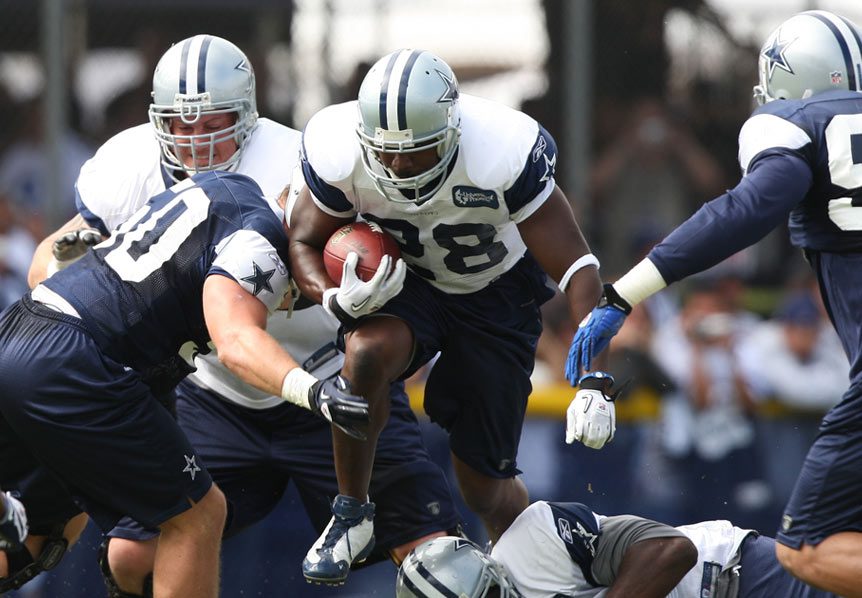 Truly rigorous and structured sports science can bring to football something it has long required: a foundation of peer-reviewed fact coaches can use to develop student-athletes in safe, and still demanding, ways.

Dr. Bob Ward served as the conditioning coach for the Dallas Cowboys from 1976-1990, mainly during the tenure of legendary head coach Tom Landry. I gave Dr. Ward a call after reading his recent book, and opened the conversation by asking him what areas of football he thought were now ripe for scientific study. His response surprised me. He said, “We know nothing!”

To bring his statement into context, Dr. Ward was given a lot of freedom in his time with the Cowboys to investigate any way he could make the team better. As a responsible scientist, he shared what he found with peers in the field via clinics, discussions, and a few academic publications. By doing so, he had a profound and far-reaching influence upon the game.

Dr. Ward was responsible for shaping many of the methods that we use today to develop football athletes. In fact, many of the things we do today have his fingerprints all over them:  applying martial arts, psychology, physiology, and analytics to training. Yet, we still know “nothing.”

Simply put, there’s not much performance research out there on football, not much to enhance our understanding of the game so that we can develop the best possible methods. But why?

Much of the reason is because of a lack of access or connection between a relevant sports science research group and a team to drive knowledge development within the sport. A research group may be able to throw some cerebral “muscle” behind the athletes and coaches, and thoroughly investigate any coach-driven ideas or problems that warrant a deeper look.

As an example of this, as a graduate student, I volunteered as a football coach at Science Hill (Tenn.) High School. Because of the access I had to our team, I managed to help enhance our understanding of the game by conducting the only study to track high school football player activity using global positioning system (GPS) equipment.

This was no easy task, and it was only made possible with the help of a few talented colleagues from the Department of Sport, Exercise, Recreation And Kinesiology at East Tennessee State University.

I published an article in a peer-reviewed journal so we could share our findings with interested coaches, and perhaps one day, someone could conduct a more thorough study. Perhaps we could compare some of the differences between levels and answer questions like:

This knowledge may help us to more accurately identify what a “good one” is, along with providing the building blocks to create more relevant and effective conditioning programs for our athletes.

The truth is that not a single comparative conditioning training study with American football athletes has been published. In its simplest form, if we were to conduct such a study, we would pre-test athletes, then separate them into two groups.

As simple and necessary as it sounds, this study doesn’t exist, meaning we’ve not properly vetted the conditioning drills we use in our programs nor formally identified them. In addition, we haven’t yet found an optimal volume of exercises or the best order for us to implement those drills.

Some studies with college-aged males and athletes from other sports have been performed, but studies assessing common practices used with football athletes have not been performed.

Why does all this matter? On the extreme end of the spectrum, we continue to see student-athletes die during and after training sessions every year. Our players are also being hurt by coaches who push them through workouts that induce rhabdomyolysis (an acute and dangerous condition that results from excessive muscle damage). Both of these issues are major problems that repeat frequently.

On the milder end of the spectrum, coaches who have confidence in their training program may have misplaced their confidence. The program may not be as effective as they think, because they haven’t tested the athletes or vetted the drills thoroughly. What may be considered “good” drills could be more effective in a different distance, order, timing, volume, or context.

A handful of studies have compared weight training programs with football players from a few levels of the game (the results of which are for a different discussion), but no study exists that has evaluated an entire conditioning program (lifts, change of direction work, conditioning, speed, etc.) on the basis of comparison to another.

There are even case studies available that detail testing and conditioning sessions that have hurt athletes (i.e., induced rhabdomyolysis or heat illness). However, if we look across the industry, from recruiting to performance testing, very little innovation and detailed process evaluation (i.e., quality control) currently occurs—even in well-funded athletic programs.

Much of the reason for this is a lack of access for sport researchers and their graduate students to perform work with athletic teams. Not many people are willing to acknowledge this point, but to understand a sport better, it is necessary to conduct research on it. Overseas sport organizations that have grown more successful, per capita, than the United States (i.e., Australia) have integrated sport scientists to evaluate their training and other processes, and produced research that refines these processes using observed evidence of what worked best.

This has spurred massive growth and knowledge development that set their athletes on a better course and ultimately helped coaches perform better.

A minimally-explored area in sports science that is ripe for study is talent identification, which requires a long-term testing and evaluation process. Proper study of such a concept would require long-term research programs that may extend well past the typical coaching cycle in the professional and collegiate contexts, and may conflict with some current league or association rules.

If such infrastructure existed, we would be able to match talent-identified athletes to better development opportunities to optimize their progress. This is a great reason to change some rules; it’s in the best interest of the athlete!

I’m of the opinion that it is advantageous for athletes to participate in psychological and physiological screening practices, and for high level sport teams to use these for selection purposes. This may ensure a better match of an athlete to a program. These test batteries should extend well beyond the traditional combine tests, many of which became popular in the ’80s and haven’t really been modified or adapted since. Detailed testing enhances our decision-making processes in selecting players for a roster. Therefore, a well-controlled and in-depth battery of tests should be considered necessary for an athlete to become eligible for advanced (FBS-level) or professional levels of the sport. In fact, this is actually done as typical early profiling in some overseas sport systems.

Still, we must first find out what to look for in all these tests. What does a “good one” think, move, and look like? Do these answers change as the athlete matures, and if so, how? If we’re spending millions on scholarships, facilities, or salaries, you’d think we’d be doing our homework and vetting players (and coaches) as thoroughly as possible to enhance decision-making.

The truth to this point is that most football coaches probably don’t have the time to implement many of these concepts, and most may lack the education required to perform well in these areas. A specialty service, provided by a relevant research team (in-house or collaborative), is the most effective way to get this information and evaluate it properly, especially if this sport science team has members who understand the game.

Another critical aspect of sport science that is already getting some attention by some teams is athlete monitoring. Monitoring programs involve specialized staff (sport scientists) observing and testing athletes in a variety of ways, to include non-invasive methods, such as long-term GPS tracking, and invasive testing, such as blood work or performance tests.

These activities can demonstrate athlete development trends or identify problem areas that need attention. In speaking to an NFL team staff member a few years ago, I heard a myth that is unfortunately still perpetuated.

Once teams start to look at finer details through monitoring programs, then they start losing.

In truth, at many levels of sport, a lack of talent – or the demonstrated inability to express talent optimally – are probably more likely causes of losing than the existence of a monitoring program. Unfortunately, this myth still exists in the minds of some, and I believe it is partly responsible for the slow growth of specialist support jobs in American football compared to many professional sports overseas.

In the U.S., some coaches have also latched on to the perspective that a sport scientist intervenes in a practice and pulls athletes out according to data provided by wearable tools. This is a poorly-informed perspective! A good sport scientist helps to design, measure, and validate the training architecture used, and figure out answers to coach-driven problems encountered along the way.

To be clear, just purchasing GPS units and collecting data is only one potential part of this system. Using GPS technology doesn’t mean a team is doing sport science or has a sport scientist. Some FBS and NFL teams have fallen prey to this idea, and aren’t using the resource to its fullest, in part due to a lack of personnel able to handle the mass of data that this equipment produces.

Specialist support employees (a sport science team) are usually required to find meaning in the data and perform analytical work, along with driving technology forward to produce more useful information in more relevant formats. Without specialist support and coaches willing to integrate findings, any data collected is reduced to “interesting information,” fleeting in nature, and therefore not very useful.

If correctly interpreted at the optimal level of awareness, the data provided by these support services may identify several key points:

Even in well-funded programs, to my understanding, football really hasn’t had a well-resourced or well-integrated sport science system in quite some time. However, some teams do have in-house talent to help with research and development projects, and many high-level teams task strength coaches or sport medicine staff to operate some technological equipment.

However, the data sets acquired by these coaches are meaningless unless they are applied in the proper context, through a long-term profiling and evaluation lens.

This requires the use of statistical tools and long-term staff stability. Very few teams employ such specialist support staff, and to my knowledge, even fewer are able to operate as freely as Dr. Ward did. Further, these specialists are rarely able to share their findings with the coaching science community via publication, due to irrational fear of releasing the recipe to the “secret sauce.”

The truth is that the time required to publish information in scientific journals usually exceeds the life cycle of a coaching staff, so in other words the “secret sauce” has often spoiled or coaches have moved on by the time information can be made public and disseminated to the coaching community.

In addition, not being able to share findings creates a personally challenging situation for a growth-minded individual, and impedes their own professional development.

So how would an enterprising coach address this issue? Open the door! Many football programs share campuses with more academic areas of study than they can account for. How are college staffs making use of the brain trust they share a campus with to develop sports science? NFL teams can reach out to industry specialists for help, or invite groups of key experts to participate in a summit to help attack coach-identified problems from a new angle. By opening the door, we give ourselves opportunities to grow.