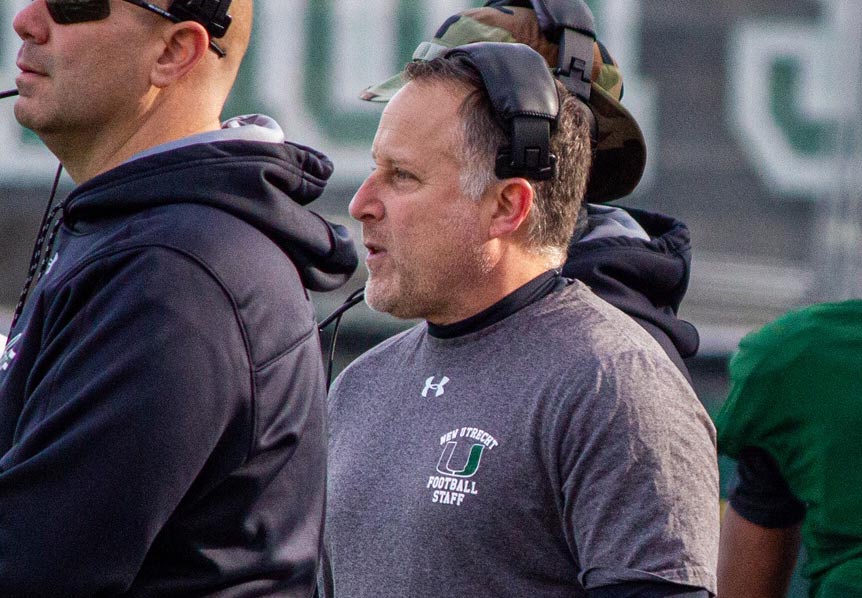 It’s late in the fourth quarter of the state semifinals. You’re trailing by three, but you’re driving. Controlled chaos pervades the sidelines, as you and your staff do your best to keep your team in the best possible play, with the correct personnel. It’s crunch time, and an entire year’s work comes down to this drive. Suddenly, out of nowhere, your fellow coaches stop responding to you. You don’t have the Vokkero Guardian system. You scream louder and louder into your headset microphone, to no avail. They can’t hear you, and there’s nothing you can do about it.

Disgusted, you fire your headset into the ground.

In the world of modern wireless communication, scenes like this shouldn’t be so familiar to coaches, but the sad reality is that this exact scenario is all too common. Most coaches endure more struggles with their sideline communication systems than they would care to admit, especially for the amount of money they have invested in them.

Alan Balkan, head coach of New Utrecht High School in Brooklyn, N.Y., no longer worries about such struggles. At the start of last season, he made the switch to the Vokkero Guardian Coach-To-Coach (C2C) System (AFCA Booth 775), and it’s been smooth sailing ever since.

“You don’t get your signals broken up. I’ve used other products in the past, and when we would go to fields that have big open areas, we would lose our signal constantly,” Balkan explains. “We couldn’t even use those systems. We had to go to walkie talkies. With Vokkero, we never lose our signal.”

In addition to the reliability he has enjoyed, which should be the minimum standard for any coaching headset system, Balkan says he’s most impressed with both the convenience and clarity Vokkero provides.

“This system, we usually keep it on,” Balkan says. “We have five guys, sometimes six. We usually keep it on ‘all staff,’ but every now and then I’ll go to the defensive staff just to talk to them up on the roof about something else and then we’ll flip to offense. But a lot of times we keep it on ‘all’ because the clarity is so good that even on ‘all,’ you hear it perfectly.”

The Vokkero Guardian C2C offers three separate channels of communication for up to 16 different coaches. Coaches communicate in a secure, full HD-quality audio conference, with patented noise-filtering technology that enables clear communication in even the loudest stadiums.

You May Also Like: An Ode To The Grind

And what sort of prep does a system that clear and flexible require? Surely a system this professional and robust demands some serious setup with base stations, antennas and retransmission stations.

“We recharge it the night before, 24 hours before kickoff,” Balkan says. “You take them off the charger, put them in the box, and carry the box to the game. You open the box, put the headsets on, press power and we’re ready to go. We don’t have to go upstairs to the roof and set up a box up there.

“With Vokkero, you don’t need that. There are no extra pieces to set up. It’s just a remote and the headset and that’s it.”

It’s difficult to put a price tag on reliable communication, especially when entire seasons and careers are riding on it. Even so, the Vokkero system comes in at an affordable price for programs at all levels.

As far as Balkan is concerned, there’s no good reason for him to roll the dice with anyone else.

“I’ve used the other guys, almost all of them,” Balkan says. “And now I use Vokkero, and I’ll never use anything but Vokkero.”