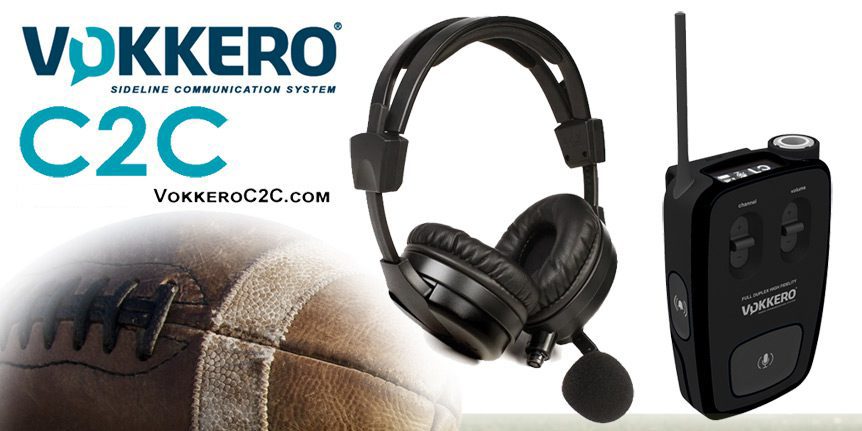 Coaches are constantly reminding players during practice to stay in the present and try to get better with every rep, every snap and every drill. Coaches can sometimes find it difficult to help players improve constantly, with all of the moving parts they are responsible for during practice. Immediately correcting flaws in technique or helping players correct their stance or form can be a daunting task in real time, with the staff spread out all over the practice field.

Similarly, officials find it challenging to do their job at a high level with all of the distractions on the field  every weekend. Effective, immediate communication is critical to making sure calls are not missed, and more importantly, that the entire staff remains informed of the calls being made.

Southeastern Conference Official Mark Curles uses Vokkero® to combat these challenges. Vokkero® is a hands-free system, and does not require any fixed relay or base station.  The system is designed to enable multiple users to hold an audio conference instantaneously, on a permanent, secure basis - a drastic improvement over communicating strictly with the use of hand signals, which often left Curles and fellow officials confused about the call on the field.

"We are still doing the signals, but verbally and in our ear, we can talk about it," Curles says. "You know [what the call is] instantly and you don't have to divert your attention away officiating the play."

Coaches, like officials, have to focus on what their players are doing on the field, whether it's in practice or in games. It requires that their eyes remain trained on their players if they want to fine-tune fundamentals, positioning or scheme. With a hands-free, open-mic system, coaches can stay in constant communication with each other from across the field and keep the conversation going without needing to stop practice or huddle up for every single correction. This powerful coaching tool allows coaches to make real-time corrections like never before, helping players make the most out of every single practice rep and every single play. Curles has found the ability to have constant communication within the officiating crew invaluable. It saves everyone time while effortlessly keeping them all on the same page.

"If the side judge calls a foul and it was against the team on the other sideline, the coach on the other sideline wants to know what the official called," Curles says. "It used to be that we would get coaches that information at the first chance we'd get, and it might be a few plays later. Now, the coach hears exactly what's being reported to me the first time. He hears it exactly and we can tell them instantly."

Vokkero® has contributed to improving decision-making out on the field and has played a key role by facilitating communication, including preventive communication, among referees like Curles. Now coaches can reap the rewards of this same trusted technology in every single practice and game.

Vokkero® has already proven itself in the world of industry, the World Cup, the Champions League, and even at the Olympics in Rio de Janeiro. With their new Coach-To-Coach system, they are ready to give coaches the competitive advantage on the gridiron.