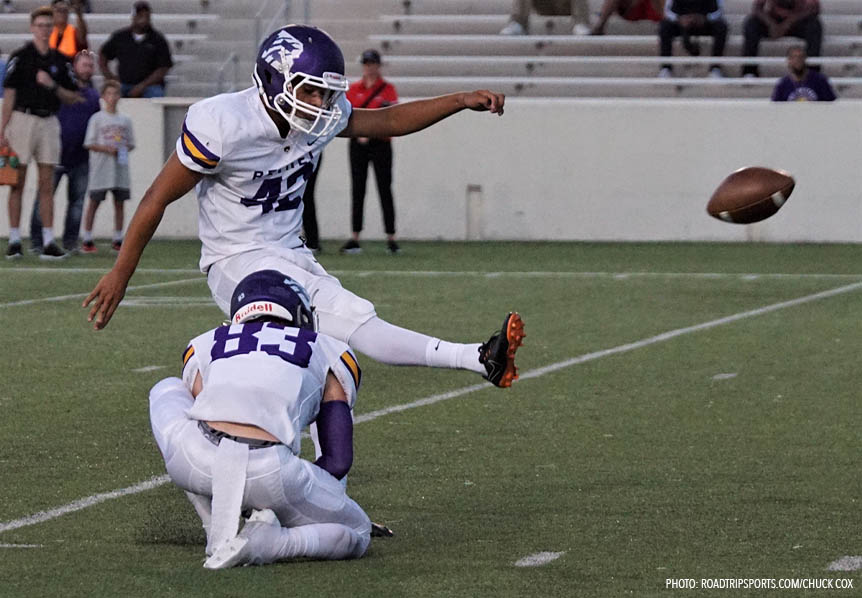 The skills of kicking and punting are based on directing a kicked or punted football at a target or toward a particular position on the football field. To accomplish these objectives, the kicker or punter first aligns in a precise position to effectively direct the flight of the ball. Throughout the alignment process, the kicker or punter uses natural aiming points and landmarks as reference points. Each time they refer to these positions on the football field, they have an opportunity to set an immediate goal and visualize the football reaching that target. Whether they realize it or not, they are constantly preparing to succeed by first seeing the results of their efforts before they ever kick or punt the ball.

Kickers and punters can incorporate visualization and imagery techniques into their everyday routines in many ways. This is a natural approach to the mental aspect of the game and should be incorporated as part of the skill-training process. These techniques can effectively increase their abilities to perform under pressure by increasing their confidence. Through game-like experiences, they use these techniques to maximize the efficiency and effectiveness of training and give them the edge they need to perform at an optimal level.

Every time the kicker or punter aligns in position to kick or punt and focuses on his reference points, he should quickly visualize the flight path of the football going directly to the target. For example, the placekicker has the opportunity to visualize when he’s determining his point of placement, when he’s toeing the line to determine his vertical alignment, and when he checks his target from his stance.

The placekicker can develop the ability to read his mechanics by seeing and feeling his body position (kinesthetic feel) during the post-kick check phase to learn the precise path of the football. He develops this technique so thoroughly that he anticipates the exact location of the football simply by evaluating the reference points of his body.

As his eyes ascend, he’ll be able to extend the arm on the side of his kicking leg upward in a direct line toward his target, pointing as if he were touching the football in flight.

As part of their pregame preparation, the kicker and punter should check the field surface, assess weather conditions and wind direction, and study the general layout of the facility. This is especially important before away games. They should identify certain landmarks or stationary objects to use as aiming points and become familiar with the environment. The pregame is also an excellent opportunity to align on various spots of the field and simulate game situations in order to visualize successful kicks and punts. This active form of imagery can be done anywhere on the field.

Getting properly aligned provides a great opportunity for the kicker or punter to focus his attention on his target and then ensure every step of his alignment aligns precisely with his target. This process is the basis of kicking and punting a football in a precise direction.

The routine of alignment requires focused attention that also serves to eliminate distraction. The alignment routine gives them something constructive to do when the game is on the line and they must focus solely on the kick or punt.

As the kicker or punter runs onto the field, he should:

The progression of running into the game, determining his target, aligning precisely, visualizing the objective and performing optimally demands total concentration. The entire process requires attention to detail and allows the disciplined kicker and punter to eliminate outside distractions.

When the game is on the line and a pressure kick is coming, you can expect the opposing team to try to disrupt the kicker’s focus by calling a time-out to delay the kick. This is known as icing the kicker. The opponent wants to make the kicker consider the magnitude of the kick. The delay also provides an opportunity for opposing players to do a little taunting by reminding the kicker of the enormity of the situation. They might even throw out a few personal barbs to try to create negative thoughts that anger or frustrate the kicker.

Whatever the case, the kicker has a multitude of mental weapons to shield himself from a barrage of verbal attacks. First, to be prepared and game-ready, he should always strive to develop his skills until they become second nature. He should be so confident in his performance that he doesn’t have to think. He simply responds.

He should plan to succeed by practicing the situation. He rehearses and practices the last-second kick and the kick- with-the-game-on-the-line scenarios throughout the season during a weekly regimen. He approaches every kick as if it were a game winner. It doesn’t matter if it’s a PAT in the first minute of the game, a 45-yard field goal in the middle of the second quarter, or a chip-shot kick early in the second half. He routinely approaches each kick as if the game depended on his success. This way, he can approach a true game-winning kick as if it’s just another kick.

He identifies his target and aligns accordingly. The alignment routine requires focused attention that also serves as a remedy to eliminate distraction. He also focuses on the finish and on performing his mechanics optimally. By aligning properly and finishing properly, he allows the fundamentals to be executed effectively. This in itself demands total concentration.

He sticks with his routine. The act of running onto the field to perform the kick is a routine every kicker is accustomed to. An opposing team trying to ice the kicker might call time-out after he finds his target and aligns in his stance. With approval from the coach, he should consider running back to the sideline and standing next to the coach, just as he did prior to running into the game to make the kick. After the time-out, he gets approval from the coach and then goes back into the game, just as he did the first time he went onto the field. This is a great way to keep active during the time-out without standing on the field and thinking. More important, he sticks to his usual routine.

He separates himself from the opponents. When the time-out is called, he is usually 9-10 yards away from the opposing team. This is too close because he’ll clearly hear any verbal barbs directed his way. Instead, he should immediately walk away to establish separation and allow some of the crowd noise to block out the on-field banter. He might talk to a teammate or take the chance to visualize the upcoming kick.

He thrives in the moment. This is exactly the kind of situation he has prepared for. He develops the mentality to embrace the challenge. This is a moment he has played in his head over and over. Not only is he prepared, he is thankful for the opportunity.

He talks with either the holder or the coach about something insignificant or what needs to be done after the kick is made. For example, while on the sideline during the icing time-out, the coach might say, “After you make the kick, make sure that on the kickoff you kick a deep squib kick down the middle of the field, and tell everyone we need an all-out effort to cover.” With these words, the coach provides a powerful message about his confidence in his kicker.

Dusty Mangum, who began his college football career as a walk-on for the University of Texas, is best known for a 37-yard game-winning field goal as time expired in the 2005 Rose Bowl. Moments prior to Mangum’s kick, head coach Mack Brown told the senior, “You’re the luckiest human being in the world because your last kick at Texas will win the Rose Bowl.” The kick made Mangum an instant celebrity and a legend in the storied history of Texas football.

Finally, the kicker repeats a positive mantra-finish to the target, fluid and smooth, focus on the finish. He stays positive, waits for the time-out to end, and then calmly kicks the ball through the uprights.

This article was excerpted from the book Football Kicking And Punting by three-time Super Bowl winner and seven-time AFC Pro Bowl selection Ray Guy & Rick Sang, co-founder and director of the Ray Guy Prokicker.com Academy. The book is available for purchase from Human Kinetics at http://bit.ly/hksptms.