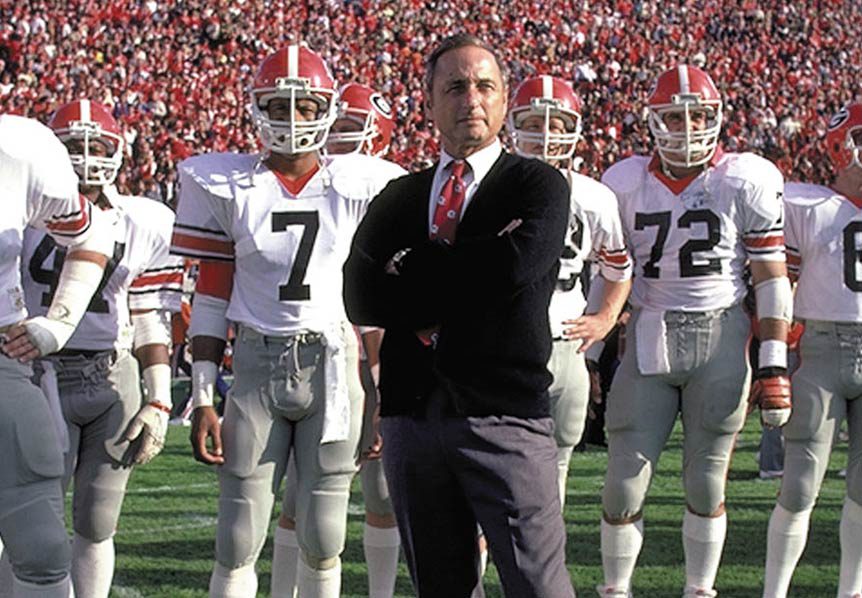 It’s a game of individual battles, assignments and responsibilities, but when football is boiled down to its basic parts, it’s a team game more than anything else. That’s why Vince Dooley, 85, the head coach of Georgia for 25 seasons (1964-88) and winner of one national title, dedicated his life to the sport.

When Dooley is asked about what fueled his passion for football, he doesn’t hesitate to say, “being a part of something and being a responsible part of something that’s bigger than oneself. The greatest satisfaction and the thing I miss is that moment in the locker room after a big win, and beating a team you weren’t supposed to, and seeing the celebration of the team, the managers, the trainers and whoever else is a part of it.

“I used to just sit back and watch, and really enjoy it as a satisfying moment.”

Dooley earned a lot of those satisfying moments in his career with 201 victories (all at Georgia), six SEC titles and eight bowl wins. He says football coaching never was “work” to him, it simply was part of his life. It’s a part of his life that almost never came to be.

Dooley gives a great deal of credit to his high school (McGill Institute) coach, Ray Discharry, for his career path. It’s a testament to the positive influence high school coaches play in the lives of their players.

“Outside of my parents, no person had more influence on me than my high school coach because, at that time in my life, sports made the most sense,” Dooley recalls of his time growing up in Mobile, Ala. “You respected and admired your coach, and you learned from him. He had the positive influence that I needed at a time in my life when I was finding my way.”

What Dooley wants players learning from the coaches — beyond the life lessons that stick with them for the rest of their lives — is that they know how much their coaches care for them and want them to be safe. He’s encouraged by the lengths coaches are going to make the game safer. Dooley describes football as a “spartan” game in which physical toughness is required. Despite this, there are ways to make the game safer to keep players on the field and reaping the benefits of football.

“I was on the rules committee and chaired it, and safety always has been at the top of the list,” Dooley says while adding that he’s pleased with how medical staff members now are more actively involved in player evaluations.

“You’re a football coach, you’re not a medical doctor. Those decisions need to be made and left to the doctors and trainers, so there’s no question,” Dooley explains.

He adds the increased awareness of player safety has forced coaches to go back and teach tackling the proper way — with the shoulder — and the head to the side. As young players learn these techniques, they become less at risk for injury and the game becomes healthier in the long run.

This sentiment circles back to his idea of coaches being positive influences on their players and the game. He sees the sport as an opportunity for so many young men to find purpose and learn lessons that stick with them through adulthood.

“It was through this sport that I was even able to go to college. It provided me an opportunity,” Dooley says. “The championships, the bowls, the winning will never be lessened, but as one grows, you realize the players become increasingly more important.

“(As a coach) you are such a positive to influence people. You have that responsibility and you constantly need to be reminded of it.”