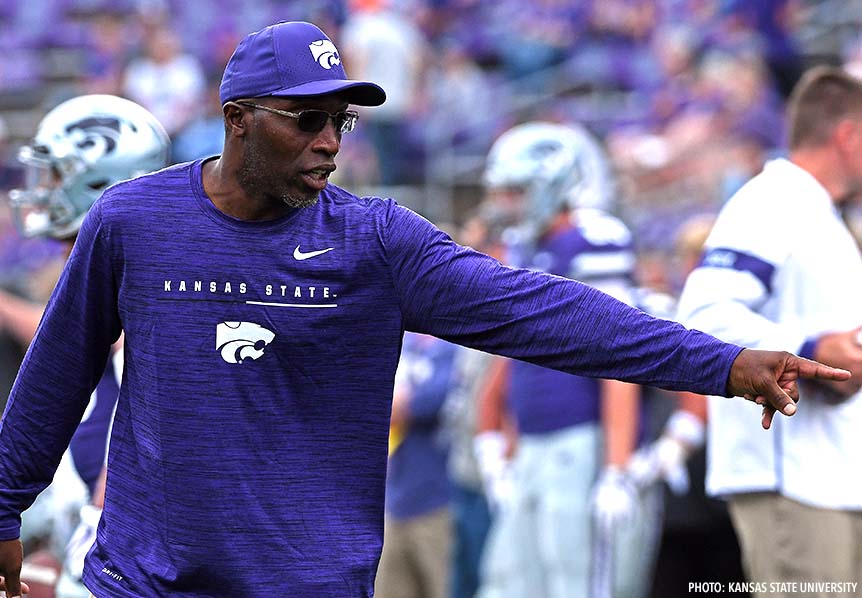 Van Malone, a football lifer, is thrilled finally to have an opportunity to combine his passion for the game with the daily love of his family. The assistant head coach, passing game coordinator and cornerbacks coach at Kansas State University is fortunate to have his son, Vaughn, a redshirt freshman cornerback, on the roster in Manhattan, Kan.

“The toughest part of our profession is not the stress of winning and performing well. For me, the difficulty of balancing family and work is the biggest challenge,” Malone says. “Other than this experience (of coaching his son), I have missed out on many of my kids’ sporting and school events.”

It’s also the stress of moving and relocating. Consider his 22‐year coaching career. He’s had stops at his alma mater Waltrip (Texas) High School, Conroe (Texas) High School, North Dakota State, Western Michigan, North Texas, Texas A&M, Tulsa, Oklahoma State, SMU, Mississippi State and now Kansas State. Clearly, nothing has been handed to Malone … despite having a five‐year NFL career and being a two‐time special teams Pro Bowl selection from the Detroit Lions in the mid‐1990s. It’s a career defined by a constant drive to learn, teach and improve.

“My drive has changed for the better. I am even more driven the more I understand the need for coaches in our society, the need for a force to galvanize young people,” Malone says. “As I discover the level of passion and energy that our young athletes have, I realize how vital leadership is for them. I am driven to direct their energy for positive outcomes.”

Those outcomes have been plentiful since Malone first picked up a clipboard in 1999. Consider that in his four years (2006‐2009) on Texas A&M’s defensive staff, the Aggies went to three bowl games. In his two seasons coaching the secondary at Tulsa, the Golden Hurricanes ranked first nationally in interceptions (with 24) in 2010 and 12th nationally (with 18) in 2011. At Oklahoma State, Malone directly worked with Justin Gilbert, who in 2013, was the Cowboys’ first finalist for the Thorpe Award. In his third season as defensive coordinator at SMU (2017), he was named the AFCA’s National FBS Assistant Coach of the Year. He then spent a year on the defensive staff at Mississippi State, where the Bulldogs ranked first in the nation in scoring defense and third overall in total defense. In his first season with Kansas State (2019), the Wildcats turned in their best scoring‐defense season since 2003, allowing a stingy 21.4 points per game.

“I have had tons of great coaching experiences like players graduating and former players being drafted. I have also had the opportunity to coach in more than 10 bowl games,” Malone says. But, he admits, that beyond all the coaching accolades, it’s seeing one of his former players, Tremaine Jackson, become the head coach at Colorado Mesa University that is his greatest coaching experience to date.

Now, in a world in which COVID‐19 has altered so many things about coaching from schedules and locker room space to the physical and mental well‐being of athletes, Malone has made it a priority to focus on much more than perfectly executing a drill or reading a quarterback’s tendencies.

“COVID has made me more aware of mental wellness among the players I coach. It has forced me to evaluate the ways I handle stressful situations and to monitor my players closer,” Malone admits.

It’s no surprise Malone has accepted this new coaching world and is finding ways to thrive in it. He says he’s not in this sport for the awards, the job promotions or the slaps
on the back from his coaching peers. It comes down to the players he’s mentoring. Malone always is going to find a way to put them first.

“I coach because I want to make the world a better place through sports. I want to teach young men and women how to accept challenges — how to deal with adversity and how to navigate the ups and downs of life,” Malone says. “I am committed to pushing the people I work with and coach to greatness on and off the athletic fields. I try to give my student‐athletes tools to help them succeed for the rest of their lives.”