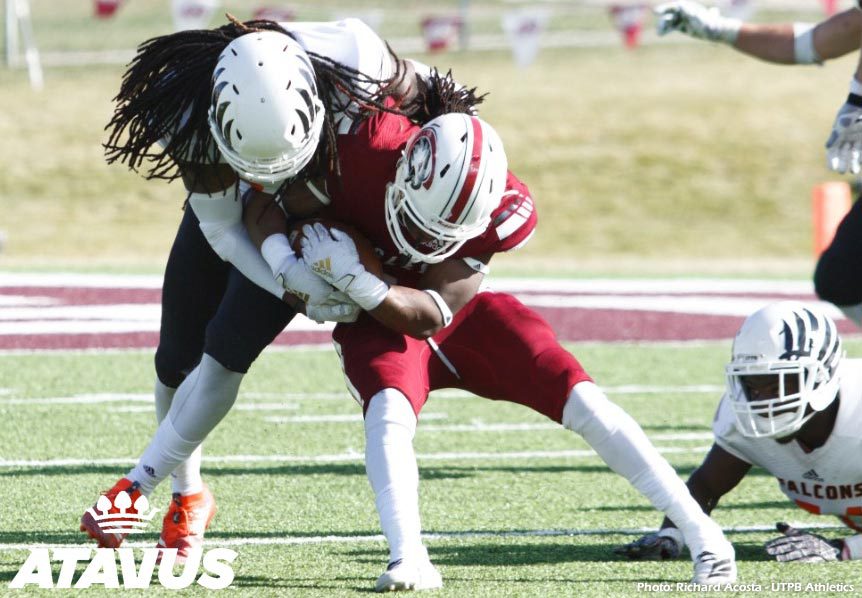 Justin Carrigan always is looking for ways to protect his student-athletes, reduce penalties and gain an advantage on the competition. One major shift for his football program from 2018 to 2019 was to partner with Atavus and get his coaching staff trained on this shoulder-led tackling philosophy.

“First and foremost, we partnered with Atavus to teach a safer and more effective way to tackle,” explains Carrigan, who says he’s already seen a reduction in injuries through the first half of the 2019 season.

While it’s every coach’s No. 1 job to keep his players safe, Carrigan also knows that by implementing the Atavus system now with his Falcon football program, he’s gaining a leg up on the Division II competition.

UTPB is the first D-II team to work with Atavus and that fact is not lost on Carrigan. He knows there are more than 23,000 junior high and high school football coaches in Texas now learning and installing this tackling system. On top of that, Atavus is also working with Baylor, SMU, Texas Tech and Oklahoma.

“If the Texas High School Coaches Association thinks it is important to implement (Atavus), then so do we. This will keep our program aligned with the greatest football coaches in the country,” Carrigan explains. “Now, when a football player comes to UT Permian Basin, we will be coaching tackle techniques in the same language and drills they already know.”

Atavus is becoming more common in the football community due to its emphasis on shoulder-led tackling, but it’s the drills that also have been a huge boost for Carrigan’s program, even beyond teaching the basics to the defense.

“We use a lot of the drills for our entire team. Every player needs to learn how to operate in space and close the gap to an opponent,” he says. “It’s even been beneficial to our offensive linemen. It helps teach them how to close space in the open field, which is helpful when they pull or release on a screen.”

By offering methods to achieve success to players on both sides of the ball at UTPB, Carrigan says his players have been on board since Day 1 with Atavus. They’ve also benefited from the instant feedback Atavus provides, especially after game days. This allows for Carrigan to develop a blueprint for the upcoming week based off the Atavus analytics provided for individual players and positions groups.

“Our players have taken to the change well. The drills provide instant feedback. After each game, Atavus helps us reassess what we need to work on, and the drills to implement for the week,” he explains.

The discussion of feedback and analytics may lead potential Atavus partners to anticipate an impersonal feel when it comes to primarily dealing with the technology, but Carrigan says that’s not the case. While his coaches and players love the technical side of Atavus, he appreciates the human touch provided by the company.

“Coach Randy Mayes (at Atavus) has been with us every step of the way and has made this a smooth transition,” Carrigan remarks.

Circling back to the primary reason why UTPB made the switch to Atavus for the 2019 season— safety — Carrigan is happy to report that through the first six games of the season, the Falcons “have had a significant decrease in concussions and shoulder injuries.”

It’s been a win all around for UTPB and the Falcon players.