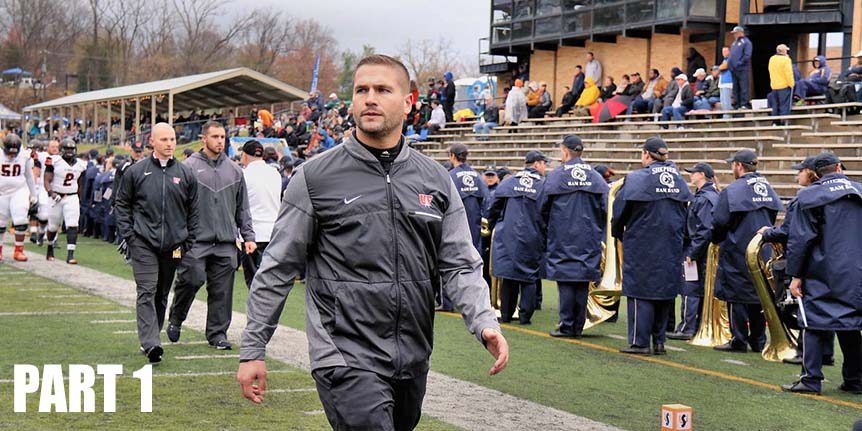 This week begins a three-part series on block destruction tools with Shock Technique. Check back next week for Part 2: Shiver Technique.

It’s an honor and privilege to be given the opportunity to share how we teach our linebackers at the University of Findlay how to take on blockers attacking their gap. As a linebacker, there are many skills that need to be developed in order to play Saturday football well. Whether its stance, starts, movement, block destruction, tackling, or ball skills, everything we do starts with mastering our eyes and feet. For the purpose of this article, we are going to analyze how we teach block destruction when a blocker is attacking our location by utilizing hand and shoulder contact.

When you think about some of the great players who have played the position, you imagine Ray Lewis or Mike Singletary using their physical ability to defeat a block to make a tackle. As important as the technique is to defeating a blocker, what is more important is the mentality it requires to be effective at it. Being blocked is unacceptable and not in the nature of a linebacker. Are there going to be times when you get blocked? Absolutely! But your effort to fight through the block should encompass the same passion as if your life is on the line. There has to be strain! I know this sounds a little cliché, but when you are trying to defeat a blocker who could be fifty to one hundred pounds heavier than you, your mentality is what gives you the edge. Training this mentality is an everyday approach that starts as soon as we cross that white line to enter the practice field. There has to be a sense of urgency in everything we do on the football field. This mentality is practiced as much as the technique itself.

For our linebackers, we teach tools to defeat blockers based on angles and ball location. We use an analogy that compares block destruction to yard work with a garage full of tools. Some tools are designed for cutting grass, while others are for digging and landscaping. Over my last twelve years of coaching, I had some guys who naturally played with heavy hands, while others exploded through their hips using near-shoulder contact. Ultimately, it’s about creating confidence within the athlete so he can be productive on Saturdays. This method of teaching block destruction involves developing tools that use both hands and shoulder contact. It is up to our players to determine which tool to use based upon the situation. It is imperative that we strive as a group to master these skills.

To develop these tools, we will alternate hand and shoulder contact days, while using a fit-to-start drill progression. Fit to start means we will teach the progression from a fit location first, then work back to the start location, which simulates Saturday football speed. It is important for our linebackers to learn high impact techniques from a fit location before we ask them to do it at full speed. For one, it gives a coach the opportunity to truly teach the technique. More importantly, the teachings limit the possibility of poor technique that could cause an injury in high impact situations.

The first tool we teach is the Shock technique. This tool utilizes hand contact versus an attacking blocker. Mastering this skill gives our linebackers the ability to lead with their hands while playing their gap or rocking back if the ball crosses the line of scrimmage. We teach Shocking as a fit to start progression with key buzzwords that will trigger fundamental aspects of the technique. Below are pictures with buzzword descriptions: SHOCK THE CYLINDER
Description: Creating contact through the cylinder in an upward motion using the heels of the hand with the thumbs up. LOCK OUT
Description: Extending the arms from the blocker to create length. HOT FEET
Description: Step replacing working to sustain a base while working through the insteps.

POWER ARM
Description: The transferring of power into the arm towards the direction we are trying to leverage. The opposite arm is assisting the power arm by pulling the blocker. TOSS
Description: A shed technique to wash a blocker away from your body. The first drill in the progression is 4 Point Shock. This is a fit drill with the purpose to develop timing, physical hands, and extension after contact. We will set up the drill with a shield holder roughly 3 yards away from the defender. The defender will be on his knees, digging his toes into the ground with his hands cocked ready by his side. The sternum of the shield is the target we are eyeing. On the coach’s whistle, the shield holder will jog at the defender while he executes a shock. Our coaching points are (1) eye the target and (2) shock the cylinder. The key to this drill is making sure the defender is not overextending before contact or allowing the shield to make contact with his body before his hands shock the cylinder. With arm lengths being different for everybody, contact roughly happens within a one yard area. The second drill in the progression is Fit Shock. This is another fit drill with the purpose to maximize base explosion on contact. Using a one- or two-man sled, align the defender’s helmet screws on the sled in a good athletic stance. His feet should be parallel with good flexion in his ankles, knees, and hips. From his profile, he should have a flat back with his hands cocked by his side. On the coach’s whistle, the defender will drive through both feet, shock the cylinder, and lock out the sled. The defender does not take a step in the drill, so we can teach what it feels like exploding out of the hips and creating length. The next drill in the progression is Near Shock. The purpose of this drill is to develop near leg contact before the Shock, while teaching the movement necessary to shed the blocker after contact. Using a one- or two-man sled, align the defender one yard away from the sled with his outside leg up in a stagger. The stagger should roughly be heel to toe with the base no wider than shoulder width apart. He should not be in a sprinter stance! On the coach’s whistle, the defender will push off his front foot and drive a power step into the ground while executing a Shock. He will then shed the sled by tossing it past his body.

There are multiple skills that we can teach within this movement, starting with the first step. It is critical that our linebackers understand the importance of pushing off the balls of their feet. Mastering their insteps has a direct correlation to not wasting movement on the football field. Cultivating near leg contact is vital to creating power. We are going to exaggerate the near leg contact by staggering the base to establish a buy-in factor. An athlete will feel a difference in the power when stepping with his near leg on contact. Our coaching cues for the Shock are the same as the previous drills, except now he’ll keep hot feet to sustain a good base for the shed.

Executing the shed starts with transferring the power to the arm in the direction you want to go. If you’re looking to go left, your power arm becomes your left arm while you maintain hot feet through the movement. The shed starts with the power arm tossing the blocker across his body while taking a lateral sidestep with his opposite foot. In this case, the right foot would be his opposite foot. This will allow the defender to clear his hips past the blocker. The one key coaching point here is not to overextend tossing with the power arm. Overextension will cause your shoulder to overturn, which will cause vertical breaking through the gap. The final drill in the progression is Shock. This drill is designed to execute the Shock technique at full speed, simulating Saturday football. Using a one- or two-man sled, align the defender 4 yards away from the sled in a linebacker stance. We do not want a stagger in the stance in this drill. We want a linebacker stance, so we can coach the lead step in the start. On the coach’s whistle, the defender will take a lead step towards his gap and execute a Shock. Our coaching cues are the same as the previous drills, but we will stress getting vertical with hot feet after the toss.