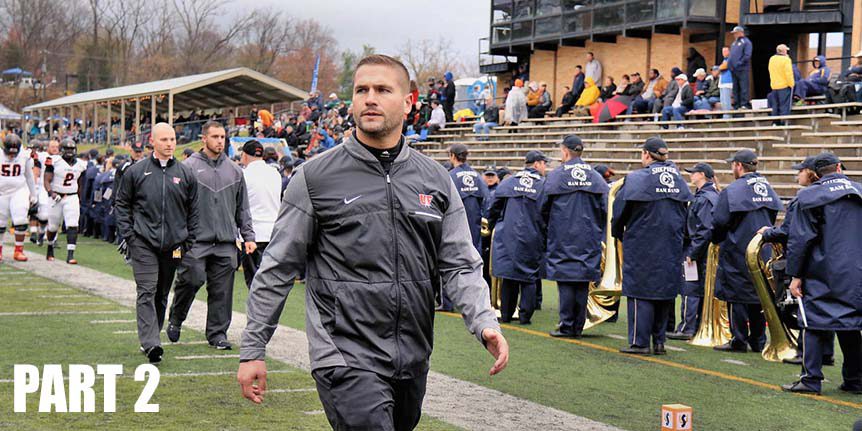 The second tool we teach is the Shiver technique. This tool utilizes shoulder contact versus an attacking blocker. Mastering this skill gives our linebackers an aggressive approach to using shoulder contact to turn the shoulders of a blocker. This technique can be used in box or spill situations as long as the defender has leverage of his gap. Similar to the Shock technique, we’ll use the fit to start progression to teach the Shiver technique. Below are key buzzwords that will trigger fundamental aspects for this technique. FLIPPER
Description: The motion of placing the near shoulder on the near chest plate of the blocker while violently lifting the forearm vertically.

RUN THROUGH
Description: An imaginary line two yards behind the blocker that we are trying to finish through. The first drill in the progression is Fit Shiver. This is a fit drill with the purpose to develop the lift aspect after shoulder contact. We will set up the drill with a shield holder and a defender in a fit position facing each other. The defender will have his near leg up with his shoulder fit on the near half of the shield. On the coach’s whistle, the defender will power step with his near foot while utilizing the flipper to execute a Shiver. Outside of the power step and flipper coaching cue, we must stress running through a line two yards behind the blocker. If done explosively, an athlete will see the shield holder’s body turn on contact. The next drill in the progression is Near Shiver. The purpose of this drill is to promote a power step before saluting a flipper. The drill will be set up with a shield holder one yard away from a defender with his outside leg up in a stagger. The stagger should roughly be heel to toe with the base no wider than shoulder width apart. He should not be in a sprinter stance! On the coach’s whistle, the defender will push off his front foot and drive a power step into the ground while executing a Shiver. Our coaching cues are the same as the previous drill, but we must stress the location of where the power step plants into the ground. The power step needs to plant inside the near foot of the blocker. Stressing this step location will create explosive power. The final drill in the progression is Shiver. This drill is designed to execute the Shiver technique at full speed simulating Saturday football. In this drill, we will have a shield holder and defender aligning four yards away from each other, with the defender in a linebacker stance. We do not want a stagger in the stance. This will give us another opportunity to coach the starts. On the coach’s whistle, the shield holder will walk forward while the defender executes a Shiver. We want to stress running through and turn the shoulders of the blocker.