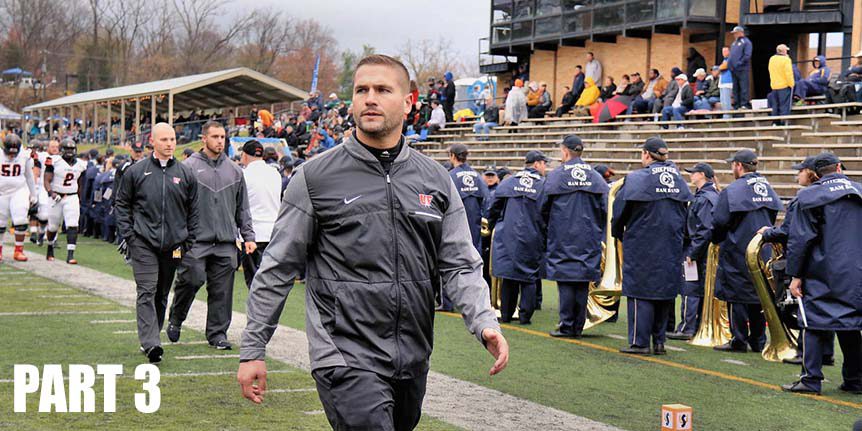 The last tool we teach is the Angle Shiver Technique. This tool also employs shoulder contact versus an attacking blocker on a kick out path. Mastering this skill gives our linebackers the ability to stop a blocker in his tracks while being in a great position to make a tackle on a ball carrier. This technique is primarily used when you are an edge player and looking to box the ball back to your help. Similar to the Shiver technique, we’ll use the fit-to-start progression to teach the Angle Shiver technique. We use all of the same Shiver buzzwords for Angle Shiver, except we will use shoveling coal instead of flipper. Below is a description of the shoveling coal buzzword.

SHOVELING COAL
Description: The motion of placing the near shoulder in the armpit of the blocker while violently lifting the forearm laterally. The first drill in the progression is Fit Angle Shiver. This is a fit drill with the purpose to develop the lift aspect after shoulder contact. We will set up the drill with a shield holder and a defender in a fit position. The shield holder will be in a kick out position while the defender will fit his near shoulder in the armpit of the blocker. On the coach’s whistle, the defender will drive through his near foot while shoveling coal on contact. Now when you think about shoveling coal, imagine how your feet have to shuffle as you thrust the shovel into the coal. On shoulder contact, think about throwing the coal over your shoulder. Shoveling coal is the motion that creates the power to stop a kick out blocker right in his tracks. Make sure to finish the drill working vertical after contact. The next drill in the progression is Near Angle Shiver. The purpose of this drill is to encourage a power step before shoveling coal on contact. The drill will set up with a shield holder one yard away from a defender. The shield holder will be in a kick out position while the defender is square to the line of scrimmage. On the coach’s whistle, the defender will take a power step and shovel coal on contact. The focal points of the drill here is the power step and keeping the feet hot through contact. It was my privilege to share our teaching progression on how we train our linebackers to attack blockers. Whether you teach hand or shoulder contact, it’s about the confidence you create within those players to compete at a high level on Saturdays. The mentality to strain and compete is every bit as important as any technique we teach our kids. Demand they buy into the process and they’ll see great results. It’s amazing to see young men grow within the process because it creates a confidence level that radiates throughout the defensive group. If you have any questions regarding the content in this article, feel free to contact me at rebholz@findlay.edu.