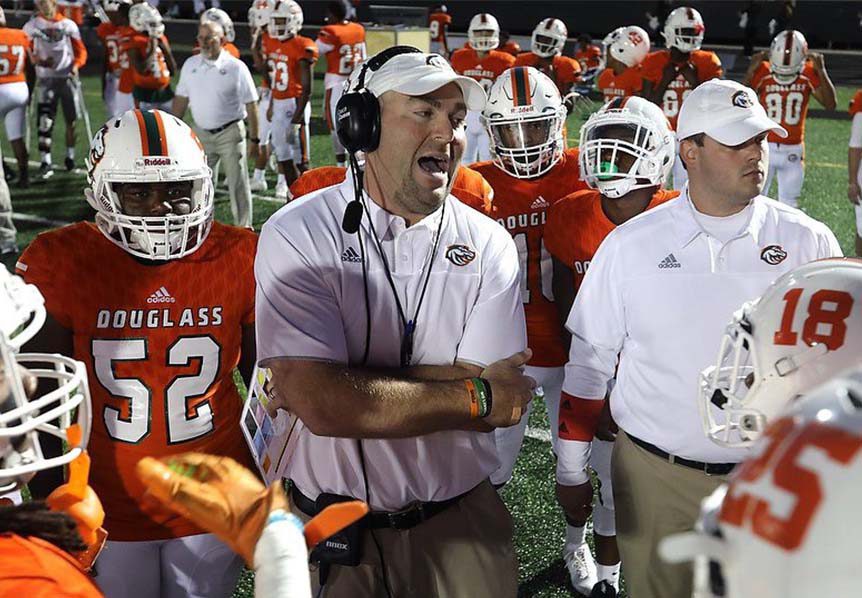 The power play has been around the game of football for decades and is a proven winner.  As we know, this play can be used in multiple formations depending on your offensive schemes; for example, at Frederick Douglass, we are a spread offense that reads the box numbers.  The one back power play has evolved into a scheme that applies not only physicality but also simple mathematics.  With many football philosophies shifting toward utilizing the skill set of a more athletic quarterback, the power scheme has evolved to include more read concepts.  The reputation of the power play is still having an effective physical attitude run play; however, if the defensive numbers are not favorable to the number of blockers, why run to a walled city?  In 2017, the one back power play accounted for 50% of our run game out of different formations and groupings depending on the opponent.  For us, one back power is an attitude run play, unless numbers in the box tell us otherwise. We utilize simple math.

Our offensive style is a spread offense, but I am an old offensive lineman, so we are thinking run power first.  The power play fits into our overall scheme with 10 and 11 personnel groupings.  From a coaching standpoint, you can tailor this scheme to suit the types of athletes or type of quarterback you have on your team. As for formations, we run our power play out of 2×2 and 3×1 sets; we are multiple with those formations mixing in 10 and 11 personnel groups to create favorable matchups against the opposing defense’s design.

As illustrated in the above pictures and like most spread offenses, we are fairly standard in most formations; we simply rearrange personnel to fit our power scheme.  The first part of the power play scheme that we teach our offensive line is where we can create a double team first.  We try to teach our offensive lineman three simple calls based on the defensive front.  The 1st call is ACE, which is a double team between the play side center and guard. The 2nd call is DUECE, which is a double team by the play side guard and tackle. Finally, the 3rd call is TREY, which is a double team by the play side tackle and tight end.  Our goal is to make sure both our inside feet step in unison to create hip-to-hip action. I teach our double teams with the motto of “4 hands and 4 eyes,” which means we are getting movement while looking at linebacker movement. Depending on the defense of the opponent, we will communicate the proper call to establish movement. The quarterback is simply reading the box to see if he should throw it or read it as shown in the diagram below.

RELATED ARTICLE: Fair Fights are for Losers: How To Take Advantage Of The Outside Linebacker

Against a 3-4 base front, we would call an ACE with the center, play side guard, and play side tackle. Now, his rule of  “ON, GAP, BACKER” applies.

As I mentioned earlier, we do not want to run into a walled city or a loaded box.  In this particular look, we are running one back power to the right and reading the flat defender for the box numbers run/pass option.  We have five in the box on this look, so our QB should recognize the opportunity to run the football.  We teach our QB to use a read-flatter technique to get his body in position to pull the football if we have a crashing defender running to the back. Our offensive line is establishing where we can double team at the point of attack; in this look, it would be the center and guard double teaming to the linebacker.  The play side tackle has a rule of On/Gap/Backer against this look and the backside tackle plays a Gap-Hinge technique. The On/Gap/Backer rule is simple: a defender over me is On, a defender inside me is Gap, and I’m attacking the linebacker in Backer.  The pulling guard’s job, assuming that the front side blockers are successful, is an easy one.  If those blocks are successful, the pulling guard is going to skip/trap pull to the front side linebacker and really hug that double team working up through the hole. I use the skip pull for our power plays and teach the guard to skip, then drive his inside shoulder into the ground to stay on track off of the double-team movement. Our aiming point is the play-side A gap, but I also make the coaching point to read and react to the defense. I think a very important aspect on the skip pull is to get your body in position to make plays; I constantly coach our body posture and positioning.   On our power play, I think it is important to teach the RB to read the play just as if you are teaching your pulling guard for his entry point.  The initial landmark we teach our RB is the A gap or the inside hip of the play-side guard, this will give him a good angle to run downhill should we get the best-case scenario on the power play. They must stay patient: the #1 mistake our running backs make on this play is they get to the aiming point too quickly and cannot react to the block of the pulling guard.

RELATED ARTICLE: Wrinkles And Twists In The Inside Zone Read

At FDHS, like some other spread offenses in modern day football, we run a version of the option.  In our offense, we can throw it or read it on each run play.  For our one back power series, we tag several quick routes to take advantage of defenses that load the box or play coverage. My favorite concept with the 3×1 formation is using #1 MOR (Mandatory Outside Release), #2 Stick, and #3 bubble with the concept. Out of 2×2 formations, we like running stick concepts. Our Quarterback looks at the box numbers and determines to throw it or read it. See videos below.

One of the beauties of the Power O is its adaptability. Over the last decade, teams have increasingly run the play from one-back formations. By replacing the fullback with an additional receiver, the offense forces the defense to respect the threat of a pass. The result is less congestion in the running lanes and better blocking angles.   It is a play that has been working for decades, and its versatility has made it a mainstay in the game. I really appreciate the AFCA allowing me to be part of this manual and please contact me if you have any questions about our system at Frederick Douglass High School.

On behalf of our Head Coach Brian Landis and the rest of our coaches here at Frederick Douglass High School, I would like to thank the AFCA summer manual committee for giving me the opportunity to share a few thoughts about our offense.  The work that AFCA does in giving and receiving information with coaches around the globe is astonishing.  I am from a small eastern Kentucky town, so it is truly an honor to be an AFCA member and to write about the game of football.