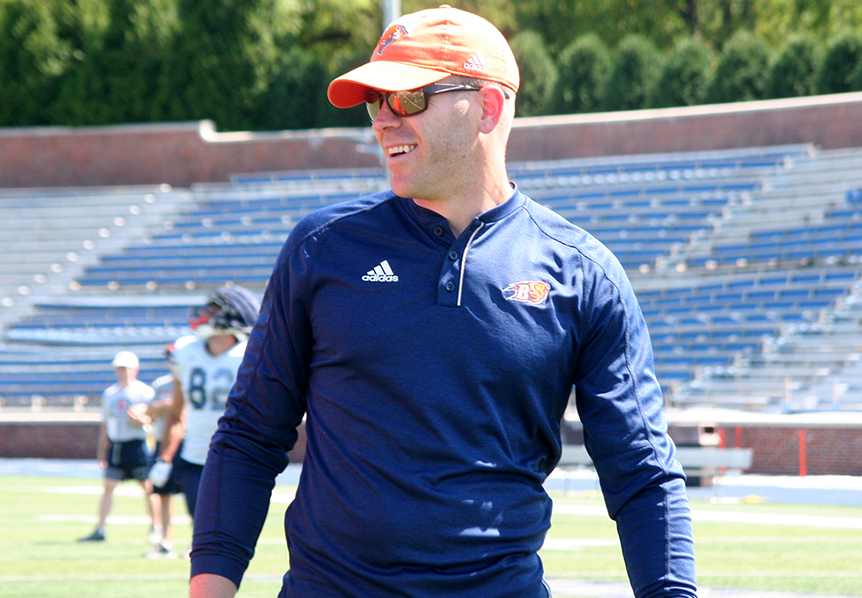 Jason Miran is the Offensive Coordinator and Quarterbacks Coach at Bucknell University. The 2009 University of Pennsylvania graduate held assistant titles at Valparaiso University and Lehigh before making his way to the Bison. Coach Miran was a member of the 2021 AFCA 35 Under 35 Coaches Leadership Institute. In his presentation from the American Football Coaches Association’s 2021 Virtual Convention, Coach Miran breaks down a few of his innovative Quarterback RPO plays he uses to gain an edge on defenses.

Each synopsis of Coach Miran’s teaching will be joined by a few of the game clips he showed in his session. If you want to learn more about Coach Miran’s system, I strongly encourage you to tune in to his full presentation through the AFCA Digital Library.

Traditional Run Pass Option plays give the quarterback the choice to either hand the ball off to the running back, or keep the ball and look for a receiver. Coach Miran flips the script with these calls, however, and allows his quarterback to decide between running the ball themselves, or finding a specific receiver downfield. In IZ Keep X-Post, the running back and offensive line execute a standard inside zone blocking scheme. While it is predetermined that the tailback will not receive the ball, the motion is carried out while the quarterback reads the boundary corner and safety.

The quarterback is looking for three things to determine whether he will throw the X-Post:

If the defense is successful in covering both receivers, the quarterback’s final option is a draw behind the offensive line double teams. This unique option set makes this play useful on a wide range of down and distances.

Coach Miran’s final play is signaled in as simply Omega, as it is part of Bucknell’s fastball series. In Omega, the offense is lined up in a 4×1 empty set with a tight end near tackle and 3 receivers in a wide bunch to the field. Unlike the previous two plays, the option process in Omega is done pre-snap. Miran teaches his quarterbacks to throw the bubble if there are two or less defenders within 7-yards of the bunch.

If the defense covers the bubble (most often in man coverage), the quarterback can hit the play-side A-gap. Miran runs this concept with a cut inside zone blocking scheme, making it an excellent call for short yardage situations to put his players in a an excellent position to succeed, regardless of what the defense decides to do.

To watch Coach Miran’s full video along with all other sessions from the 2021 Virtual Convention, log into the AFCA member portal and browse through the digital library.