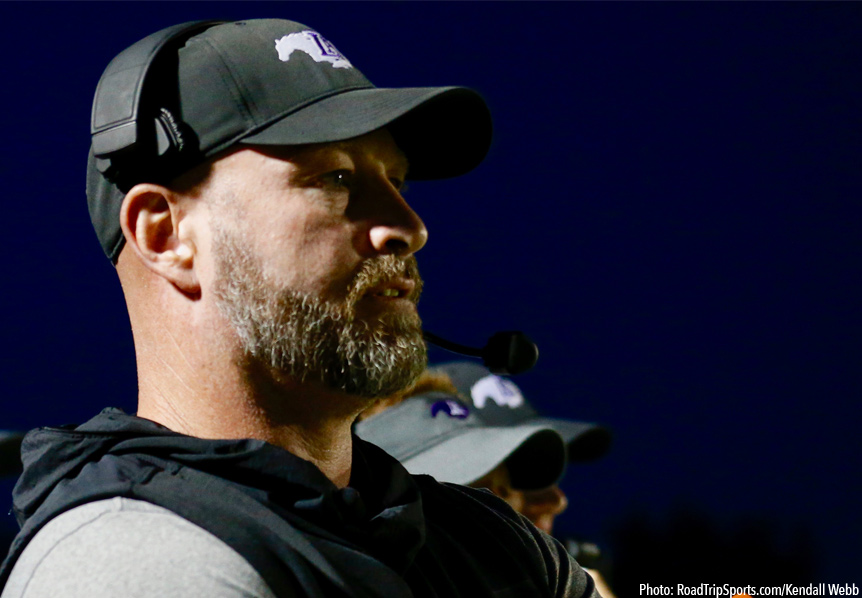 Trent Dilfer had a lot of positive influences in his life. His stepfather was a high school head coach, a junior college coordinator, and turned down opportunities to coach at the next level because “he wanted to be a great stepdad.”

Among his other personal and professional mentors, Dilfer counts Tony Dungy, Jeff Tedford and Clyde Christensen.

“My college coach, Jim Sweeney, was one of the great coaches of all time,” says Dilfer. “He was a passionate coach. He cared. He obviously loved to win, but what he did for kids in Fresno was remarkable.”

Dilfer will tell you that he leads every one of the presentations he makes with, “I grew up on the back of a blocking sled,” because he really did.

“I would literally sit on the back of a blocking sled for hours,” says Dilfer. His stepfather was an offensive line coach by trade.

So, it should come as no surprise that after discussions with his family and long hours of prayer, Dilfer accepted a position as head coach at Lipscomb Academy in Nashville, Tenn., beginning with the 2019 season.

“I always knew I’d end up coaching high school football,” says Dilfer. “Some people think I’m doing the humility thing, but I’m not. I’m really not. Yeah, I want to win state titles, and I want to build a ‘Power Five’ program in a private high school in the middle of Tennessee. I have ambitions for this community, this school. I want to create an arms race in middle Tennessee because I think it’s good for kids.

Part of creating a human development program is understanding the fundamentals of communication. No humans are going to develop in any positive way if information can’t flow through to them in a way they understand it.

Integral in reaching modern student-athletes is explaining “the why.” It’s not good enough for your shirt to have COACH emblazoned upon it. If you want kids to incorporate your ideas at a fundamental level, today’s kids need to understand the reason behind your directions.

“We’re running Power Five schemes; not high school schemes. We’re asking our players to do some really difficult things,” says Dilfer. “They’re sitting there, watching other teams do it a simpler way, and they understand we’re asking them to do something harder. To help them understand, you have to give them the why.

“Why are you waking up at 5:00 in the morning to lift in the spring? Why are you going on service projects? Why do you do up-downs after a ball security issue? Why do we need to win the pre-snap game? Why does it equate to wins and losses? Why do we want to win the field-position game? Why do we arch release on punt coverage instead of hold-up and go? Giving them the why helps them better understand that 30,000-foot view of what we’re trying to do. We’re trying to teach them graduate level stuff at a young age, because that graduate level stuff will carry over into their life.”

For Dilfer, identifying how kids learn is just as important as explaining the why.

Even though Dilfer is addressing the practical aspects of identifying how his players learn, he is also organizing his coaches’ minds to teach in the best possible way. He demands that his assistants learn something new about their players every day, because it helps identify better techniques for teaching individual kids.

“If a guy keeps making the same mistake, is that a kid issue or is that a coach issue?” he asks. “I keep pushing that it’s a coach issue, because we haven’t learned how to best engage that kid yet.”

Part of building high-quality relationships between players and coaches is the depth of openness between player and coach. If players understand that coaches are still “learning how to understand them,” and coaches are open about that fact, players will often give coaches the benefit of the doubt and do what the coach is asking them to do. Within that exchange of ideas, trust blooms and lifelong relationships emerge.

Part of Dilfer’s aura as a high school football coach is that he’s won a Super Bowl. He stalks the sidelines on Friday night, championship ring ablaze. He’s a professional and it shows. It’s a context not lost on those Mustangs in his charge.

And yet, becoming a professional coach is something he’s having to learn how to do.

He’s leading by example because a high degree of professionalism is what he’s teaching his players, and how he expects them to act.

When Dilfer looks at the caliber of player that attends the Elite 11 quarterback camp, where he is also head coach, it’s a different type of player. Those kids are performing at the professional level already because they’ve been trained as pros, and their lives have been organized to maximize the return on their exceptional abilities. There’s a high likelihood that these kids are going to play Power Five football and maybe even turn pro.

On the other hand, when he looks the caliber of player that attends Lipscomb – just like any other high school in the nation – most of his student-athletes won’t go on to play college or professional football.

For Dilfer, that’s not what matters. What’s most important to him is that his athletes at Lipscomb approach their lives and the game in just as professional a manner as those kids attending Elite 11.

At the same time, Dilfer has had to reset his own mind a little to work with high school student-athletes. He is, and always has been, an elite athlete. His daughters are elite athletes. He’s worked with elite athletes his entire life. Certainly, you might expect that to bias one’s approach to training “everyday kids.” But Dilfer is aware of this trap, and understanding that a trap exists is the first step in avoiding it.

“Here’s where I think people will be shocked,” he says. “This is actually my favorite part of coaching. I don’t get frustrated when a kid can’t do something physically. I get frustrated when they can’t do something mentally. I’m fine with a kid that runs a 5.4 playing slot receiver. I’m not fine when he takes two steps instead of four on a route. Those might be the slowest four steps ever, but four’s better than two on certain routes.

“I hate it when their splits are wrong, when they jump offside, when their eyes aren’t right. They can’t control their athleticism, but they can control the decisions they make and their behaviors.”

“When I got here, the first day, I watched this group lift. They were using a PVC pipe. The strength coach wouldn’t let them lift with a bar. Neither of them weighed over 125 pounds. They’re both 5’ 6”,” says Dilfer. “I looked at our offensive coordinator and said, ‘How are we ever going to get a first down?’

“Still, in just eight months, we’ve seen them develop so much, and not because they just became better athletes. It was because they’ve made really good decisions. They stay after. They grab an extra lift during the week. They have two protein shakes a day. They work on their routes. They know they’re not blazing fast, but they’re quick, so they use that quickness. They use their eyes to get open. They get up in people’s face before they break. They don’t take the easy road. The sit on the [Snap Attacks] for hours and hours and hours. They go out with our JV quarterbacks and run routes. They do everything to make the most of who they are.”

In a recent game, Whitefield had seven catches and Hagelgans made three, even though he was just coming back from an MCL injury.

“These are the kids that make this job worthwhile,” says Dilfer. “And I keep reminding them – Hags and Bailey – they are probably going to have to catch a third-down conversion for us in a varsity game this year. And you know what? I’m going to feel perfectly fine with it. When they line up – all 5’ 6.5” of them, 142 pounds – against a 6’ 1”, 190-pound slot corner, I trust that Hags is going to use his technique and decision-making to get open and catch the ball. He will do it. That’s elite. That’s professional.”

“What really impresses me is a kid that probably was never going to have a good experience in football, having the experience of his life because of this human development program we’re building. And that, to me, has been our biggest win by far.”