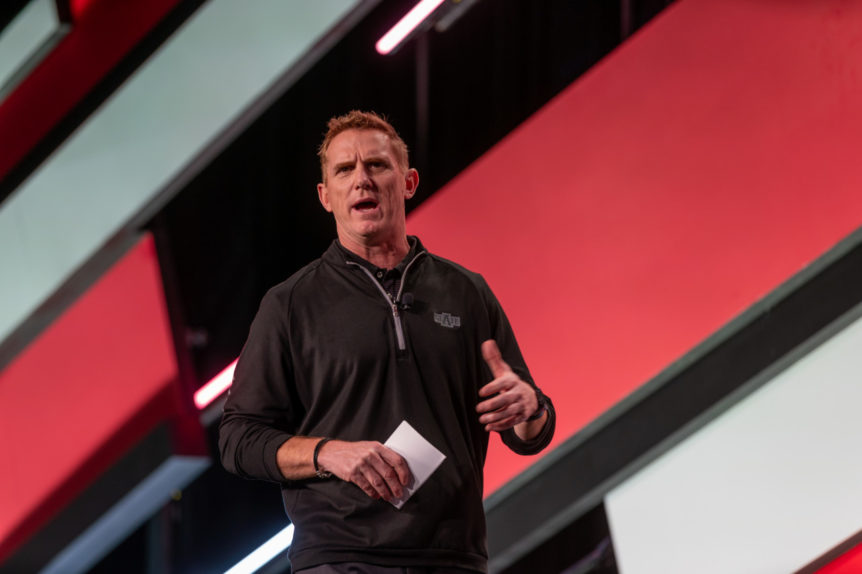 Blake Anderson was one of the various General Sessions speakers who had a chance to step away from the X’s and O’s and tell his story at the 2020 AFCA Convention in Nashville, Tennessee. The six-year head coach of Arkansas State University has had immense success on the football field, winning the 2019 Camellia Bowl, leading the Red Wolves to six consecutive winning seasons, six straight bowl appearances, and back to back Sun-Belt Conference championships in 2015 and 2016. However, Anderson talked about how it is the adversity he has faced off the playing surface that has shaped him into the coach, father, believer, and ultimately the man that he is today.

Lessons That Led Blake Anderson On Path Of Redemption

Anderson’s wife, Wendy passed away in August of 2019 after a tough and courageous fight with cancer. Anderson talked about how blessed he had been to be married to his best friend for 27 years. He mentioned that after the passing of his wife he has not been more proud to be a part of the coaching profession due to the amount of outreach, support, prayers, and kind words he has received from various coaches in the industry. Anderson spoke so passionately about how much the coaching profession, and the people he has met along the way, has shaped his life in these past 15 years. However, he also addressed how he could have never made it in this profession due to the coach he was in his first 15 years.

In the most transparent way, Anderson spoke about the naive young coach that he once was. He addressed how he was living a lifestyle that was not the one in which he knew he should have been living. Ashamed of the person he was, he had to make a choice that would change his life; football or family. After asking God and his wife to forgive him, he quickly worked on becoming the person he wanted to be. While working on himself, his marriage, and his relationship with his children, a second chance in the coaching profession came knocking at the door.

Anderson stressed how the God-first, family-second, and football-third culture that he then built his programs on has changed his life. Anderson stated, “The culture that we built has been what has gotten me through these past two years.” This faith-driven culture has changed his perspective and priorities in football and his everyday life. Anderson concluded the talk with the three things he took away from the adversity he has faced over the past two years, as he supported his wife in her battle with cancer.

So grateful to @WeAreAFCA for giving me the opportunity to share my heart w an awesome group of coaches hungry to grow in our profession… praying God uses it in BIG ways ‼️ pic.twitter.com/ZBhb3ffxRk

Coach Anderson received a befitting standing ovation when he walked off the stage in Nashville. Swing over to the AFCA Educational Library to see why!

To watch Coach Anderson’s General Session speech, along with numerous other videos and content, please log in to your AFCA membership account and search through the AFCA Educational Library.