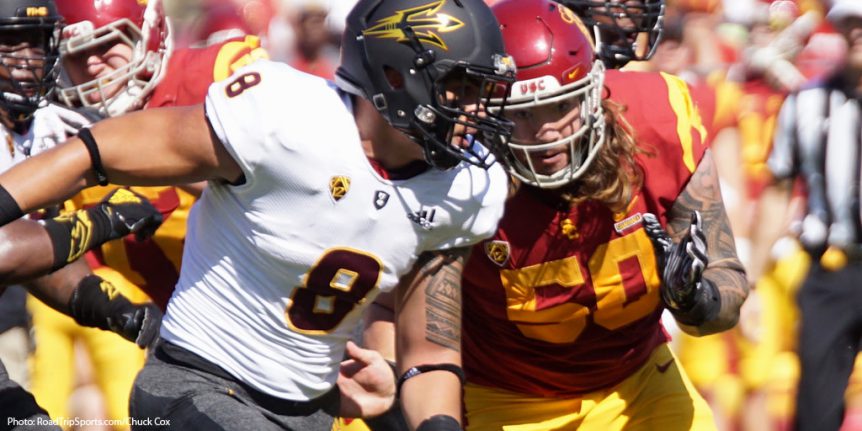 Someone once said Linebacker is not a position, it is a state of mind. That statement could not be any truer. The linebacker position is the hub of the defense both from a physical standpoint and from an organizational standpoint. In most defensive schemes, linebackers are typically the only players consistently associated with the pass coverage, pass rush, and run defense. They often are the center of communication through all three levels of the defense, making front calls as well as ensuring coverage calls. For these reasons, the coaching of the linebackers must be extremely thorough, demanding and consistent. Linebackers must be among the hardest working group on the team in terms of opponent film review and situational awareness. They must also be amongst the toughest in regards to physicality. This article will focus on the following areas of linebacker development: Teaching Strategies, Stance, Footwork, Vision, Block Attack, Pursuit Angles, and Pass Rush.

In the initial stage of linebacker development, coaches must not assume that new players have much of any foundation in football knowledge. Players must be taught from the ground up and this often starts with the teaching of basic field dimensions, terminology, and rules associated with the sport of football. Coaches should carefully define key terms that will be used in their teaching and each drill should be explained in a way that describes game application of the particular drill.

Among the many important strategies of teaching, there are two vital components that must always be considered by a coach. Repetition is the first vital component of development. In order for anyone to improve at a given skill, they need an abundance of repetitions. An efficient and effective football practice will be structured to give student-athletes a very high number of quality repetitions. Through organized, detailed, and high tempo practices, this is possible. The second vital component of development is feedback. Coaches must provide consistent and direct feedback through both verbal and written forms of communication. Student-athletes should also receive self-feedback through film review.

Higher level skills should be taught through progression based teaching. Coaches will teach the skill in the sequence of the whole, part, whole. First, the correct performance of the skill will be demonstrated to the student-athletes often through film. Second, the skill will be broken down into parts with each part being practiced separately and sequentially. Finally, players begin to rep the skill in its entirety progressing to more complex variables (moving opponent, etc.)

All drills utilized in practice should be actively seen in game situations (game application). If a coach does not see his drills being applied during game situations he must re-evaluate his practice content.

Staggered Stance: Inside foot forward, weight distributed on front foot. Chest is over the front toe, chin up and eyes are forward.

Efficiency must be sought in the development of footwork. Each step must take the linebacker to a position that will allow him the greatest opportunity to control his defensive responsibility. Coaches should avoid teaching ‘false’ steps or steps that initially take the linebacker away from where he ultimately is to go, unless for a schematic purpose (to influence blocking schemes). Cross-over footwork should only be utilized if the ball is advanced to the perimeter/sideline or in landmark coverage drops.

The basis of efficient footwork for a linebacker is ‘step; replace’. This means that when the linebacker takes one step, his next step will be with the opposite foot getting him back to initial stance or to a position of ‘near foot’ (ball/leverage foot slightly forward). Linebackers must consistently seek to keep their hips parallel to the line of scrimmage in a position to move either direction laterally without major hip rotation and a minimal amount of steps. This is true in both run and pass coverage. Once a defensive player commits to cross-over run, that player must be sure the ball cannot cut against his leverage responsibility.

Among one of the most critical areas of development for a linebacker, linebacker keys must be consistent and developed during each practice.

Linebackers must stress peripheral vision; seeing the whole picture and reacting with instinct. This directly correlates to pursuit tempo and is often the difference between a 4 yard gain and a 2-yard loss.

Linebackers will receive three reads in a triangle key:

High Hat (Pass): Core of Offensive Line and/or near back pass protect.

The most important part of attacking a blocker is the use of hands to gain separation from the blocker. The linebacker must avoid being consumed by blockers by engaging the blocker and leading with his hands. The linebacker must have excellent hand and hat placement in order to be set up for a successful outcome. Proper hand placement is both right and left hands on the chest plate of the blocker. That is dominant hand position. Thumbs must be up and elbows must be tight to the rib cage. Hat placement should be on the side of leverage (linebackers leverage responsibility in the defensive scheme).

In teaching a linebacker proper block destruction, the coach should teach in a five-part progression.

The linebacker must attempt to contact the blocker as close to the line of scrimmage as possible. This can be done by having great vision, great footwork, and great anticipation of the climbing blocker in an extremely aggressive manner. The linebacker must come to balance and disrupt the path of the back. In inside run schemes, if a linebacker does a ‘fly by’ on the block (does not engage the block but rather rips or runs past the blocker) he will not slow the ball carriers feet, thus allowing a quick vertical cut. The same can be said for force players against the perimeter run scheme.

Hands must work in sync with the hips and explode through the blocker. Proper hand placement is on the breastplate of the blocker, with thumbs up and elbows in. That is a powerful position. The linebacker must not catch or absorb the blocker but deliver a blow that will put the blockers rear into the ball carrier or gap. The contact must set a point in which the ball carrier must slow/stop his feet and commit to a direction (toward help/pursuit). Eyes should engage contact and never close.

Linebackers must keep eyes below hands, hips low and work their way from low (just prior to contact) to through the blocker. If hips are extended prior to contact the Linebacker is vulnerable to being driven out of the play. Likewise, if hips are extended too much following contact the linebacker is vulnerable to being consumed by the block and passed by the ball carrier.

The shed of the blocker must be quick and violent. The transition from the initial contact (3 pt punch) to the shed is essential. Immediately after contact with the blocker, the linebacker must quickly transition into a pull/chop or push/chop.

In run fits, linebackers will always have a force or spill responsibility. ‘Force’ players are containment players. The ball cannot outflank the force player, he must make the ball carrier cut back into the middle of the field. ‘Spill’ players must keep the ball carrier on their near shoulder and pace the ball carrier’s cutback. Force and Spill relate to how a linebacker must take on a pulling guard or lead blocker.

Below is an image of a correct angle and two incorrect angles for defending a ball carrier running to the perimeter.

Three areas of the pass rush must be developed in each linebacker: understanding of protection, speed to the set-point, and rush moves.

In edge pressures, linebackers must attack the set point of the tackle as violently and quickly as possible. The objective is to beat the offensive tackle to the set point with speed and continue on a path to disrupt/eliminate the passer. This is possible through great get-off, timing of the cadence, and efficient footwork. Once the linebacker gets to the set point before the tackle he must reduce his pad level and pad surface by dipping his inside shoulder and immediately pointing his toe to the passer. The linebacker can also chop the hands of the offensive lineman to defend against the clocking attempt. One the linebacker advances past the blocker, he must continuously rip his inside arm and lean toward the blocker to battle any late blocking attempt made by the offensive lineman to disrupt his path to the passer. Although the development of the linebacker and each individual player on the team is critical to the program’s success, the culture of the program is the most important factor in establishing a championship program. The linebacker coach must attempt to develop extremely quality players but also must be aligned perfectly with the vision and culture of the football program and be focused on the development of extremely quality men. The process of establishing expectations and standards is the greatest challenge for any team and must always be at the forefront of the linebacker coaches agenda.

Tyler Almond begins his first season on the Dixie State Football coaching staff in 2019, and will serve as defensive coordinator and coach the safeties. Almond brings over 11 years of coaching experience to St. George, including seven years at the NCAA Division I FCS level.