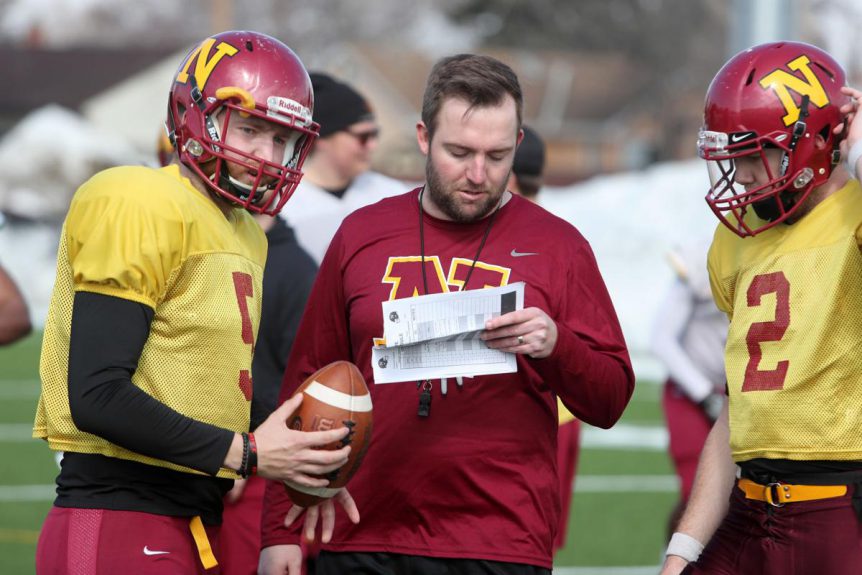 Every coach worries about not having enough time in practice to get through individual QB drills.  At Lake Forest College, we have spent a lot of time as a staff to maximize our individual time and limit the number of QB drills we do.  We do not have a hundred QB drills that we try and complete throughout the week, instead, we have 4-5 daily QB drills we complete and perfect.  Our offensive philosophy is to be excellent on 20 plays, instead of average on 80 plays.  We have taken this philosophy to our daily QB drills in practice.  Why be average at 100 different QB drills when you could be perfect at 5 daily AB drills? All these QB drills should correlate to gamedays, otherwise, it is a waste of time for both parties. Similar to using only a few QB drills at practice I don’t have a hundred different sayings to confuse my players.  Our top quarterback terms are “If it’s not perfect, it’s wrong” “Every rep is a game rep” and ”Finish every throw to balance.”

We are 100% from the gun for our quarterbacks.  For our quick game (old school 3 step) we teach the rocker throw.  For our drop-back game (old school 5 step) it is a simple 3 step drop.  We do not have a set depth on our 3 step drop.  It is more of a rhythm drop and getting the ball out on time, whether we hitch or not.  I do not have my guys getting 10 yards depth from the line of scrimmage because it makes it easier on outside rush defenders.  We will set up 7-8 yards in the pocket.

Our quarterbacks have a set warm up they do for practice, and it is the same exact warm up we use on game day.  We also don’t warm up just to warm up, every throw must hit the other quarterback in the chin.  This is a way to get an accuracy QB drill incorporated into practice quickly and get the guys locked in.  We are also not looking for bullet passes, this is a warm-up.  Throws should be firm, but no need to injure the arm in warmup.  We also do not warm up directly in front of each other, since hardly any throw in a game is directly over the center.  The quarterbacks are 10 yards apart and offset of each other by 10 yards.  Each quarterback gets an equal 30 throws right and 30 throws left.

Here is our warm-up progression.

Rocker – For our quick game we teach the rocker throw.  Catch snap and all weight is immediately on your right foot (for right-handed quarterbacks), and remains there until reading the defense and ready to throw.  When rockering, slightly step right or left, depending on where the read side is, so weight transfer is more regular.

3 step no hitch – easy three-step drop, with 3rd step slightly stepping towards the target as in the rocker throws.

3 step, 2 gathers into the pocket – easy three-step drop, as soon as 3rd step hits the ground, gather 2 hitches up into the pocket to simulate avoiding outside rush defenders.

3 step move right/left – easy three-step drop, as soon as 3rd step hits the ground, slide right or left immediately to simulate pressure up the middle of the pocket.  We are looking for a strong, wide base here and not falling off our base.  Finishing to balance is very key in this throw.

Sync and ride – this is to simulate our play-action throws.  We are a heavy inside zone team, so we will play action off that the most.  At catch of snap, we turn, show ball and sync our shoulders down with running back while keeping a wide base, pop and throw to target.  We do not care how close the RB gets to QB, sometimes he has to forget the fake and make the block.  I teach the syncing of shoulders down because it will freeze the linebackers and safeties for the time we need to make our read and throw.

We are able to get through all the phases of dropbacks in our warmup because this is not a slow pace warmup for the guys.  It is catch, gun snap yourself, take drop, throw, repeat.  If we are going at a good pace we should be able to finish the warm-up of 60 throws within 7 minutes.

We use our team’s special teams portion of practice to steal footwork QB drill time. This also helps save their arms, especially during fall camp and late in the season, and focus on their throwing posture and base. As we go through our ladder progression, we are looking for an athletic base, feet little more than shoulder-width apart. Wide base is a power base, skinny base is a weak base. I’ll hold my fingers up as they go through the ladder and they have to answer, showing me they are not looking down. We want eyes and chest up, with the ball in a normal throwing position. At any time during the ladder, I’ll clap my hands and the quarterback sets and shows he is ready to throw with a good base. Then he finishes the ladder.

Icky Shuffle (Forward and Back) – Everyone’s favorite ladder QB drill. We incorporate going backwards doing the icky because you also have to move backwards in the pocket.

Moguls – If you have ever watched the Winter Olympics and this event, it’s the same on the ladders.  2 feet in the hole, jumping back and forth, in and out of the ladder.  Both feet hit the ground at the same time.

Step in step out – This is also on the side of the ladder and very similar to scissors (don’t have a cool name for this one).  Always lead with the right foot, no matter which way we are going on the ladder, so we are always ready to throw.  Both feet are stepping into each hole.

A great way to show quarterbacks that throwing uses all aspects on your body, not just your arm.  We will go back to 40 yard throws in this QB drill, although during the season we will only go to 25 to save arms.  Quarterbacks that don’t use their core and rotation will have trouble getting it down the field, and can possibly put too much strain on their arm.  If they bring their hips and shoulders through on the throw, then getting the deep passes takes a lot off of their arms because they used their body with the throw.  This QB drill has helped our guys develop stronger arms they say, but I believe they’ve got better cores and are getting their hips and shoulders through better.  Quarterbacks will start 10 yards apart from each other and will throw each type of pass 3x before moving back 5 more yards.  There are 3 types of throws in this QB drill.

The quarterback takes regular 3 step drop.  Once the quarterback sets up in the pocket, the coach will point left, right, backward, or forward.  The quarterback will quickly step with back foot in the direction the coach pointed.  We are not taking long, massive steps here.  They are to be quick and short, only about 1-1.5 footsteps.  If we take long, massive steps, we are not in a throwing position and have to re-gather, wasting time and getting sacked.  Short steps allow us to be able to throw at any instance.  We step with back foot first so we are always able to throw when needed.  The coach will clap hands at any moment for the throw, and quarterback quickly sets and releases.  We then incorporate our Escape the Pocket QB Drill to the end of our Army QB Drill.  The quarterback will take a normal drop and set up in the pocket.  Blitzer from either right or left side will attack the quarterback.  If right side blitzer comes, and attacks left shoulder, quarterback dips left shoulder and pushes the ball away with 2 hands for protection and bananas out toward the right side.  If the blitzer attacks the throwing shoulder, quarterback steps up and escapes to the right.  If the blitzer from left side comes, and attacks left shoulder, quarterback spins away gaining depth and escapes left. If the blitzer attacks right shoulder, quarterback steps up and avoids rush before escaping left.  We always escape pocket the side the blitz or pressure comes from.  This forces the oncoming rusher to change direction and momentum at the point of tackle I would like to thank my former colleague and mentor Myers Hendrickson for asking me to write this article on quarterback play.  Also, I would like to thank our Head Coach at Lake Forest College Jim Catanzaro and Offensive Coordinator Ted Soenksen for allowing me to be on a great staff to coach quarterbacks.  I am always ready to talk quarterbacks, so please feel free to contact me either on twitter @coachschafer11 or email quinn.schafer11@gmail.com.

Quinn Schafer joined the Forester staff in 2017 as the team’s passing game coordinator and quarterbacks coach. This season will be his sixth in coaching and fourth at the collegiate level. Schafer spent the previous two seasons as an assistant coach at Coe College (IA), where he directed the quarterbacks in 2015 and running backs in 2016. Schafer was a four-year letter winner at Valparaiso where he played quarterback.