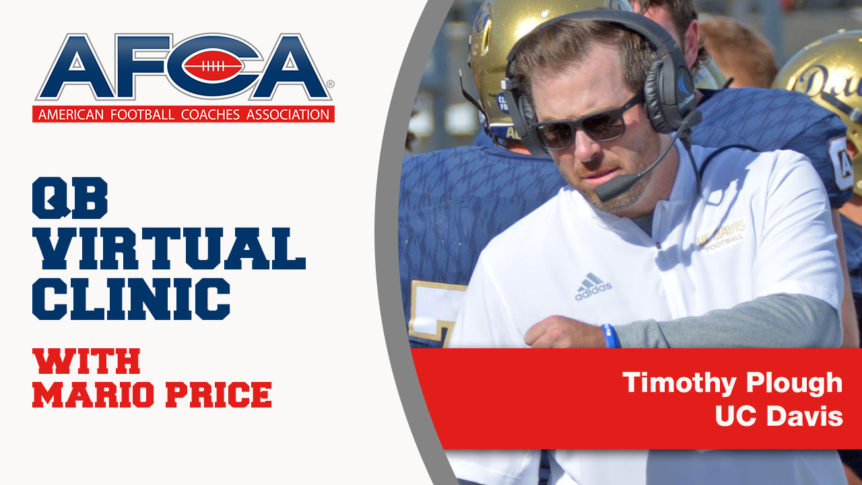 In this AFCA Virtual Clinic session, Timothy Plough, the Offensive Coordinator at the University of California, Davis, shares his quarterback philosophy, as well as some key development techniques to improve quarterback performance. Coach Plough is a former participant in the AFCA 35 Under 35 Leadership Institute.

Given the strong history of quarterback play, UC Davis has seen 11 quarterbacks go to the NFL with four quarterbacks drafted by NFL teams. Coach Plough credits this success and his personal concept of quarterback development to former UC Davis coaches, Jim Sochor and Bob Biggs.

Elite quarterback play is a non-negotiable must at UC Davis, so that is what Coach Plough looks for when recruiting. The Aggies run a system that requires a high level of intelligence and leadership.

As far as pass protections go, UC Davis does an incredible job of keeping the quarterback off the turf. In the last three seasons, their quarterbacks have had over 1,500 pass attempts and only 48 sacks. That translates to one sack every 32.6 pass attempts. While this is an impressive statistic, it is important to remember that the quarterback is calling his own pass protections. The success experienced is largely in part these calls. Quarterbacks in this program also have the freedom to make checks and audibles based on what they see the defense showing.

The UC Davis offense uses the west coast style approach. This means that the quarterback will have progression reads, which creates rhythm and timing to attack the defense rather than react to them.

From a cultural standpoint, Coach Plough looks for three things in his quarterbacks; leadership, toughness, and responsibility. It is important for the quarterback to set the tone or temperature of the offense while also creating a view of invincibility. No matter what happens throughout a practice or game, the quarterback should be the one always modeling motivation and encouragement. The quarterbacks at UC Davis also use an acronym to create this culture:

Light up the room

Optimism about everyone and everything

Vivid understanding of the offense

Emotionally invested to the cause

From a technical standpoint, Coach Plough communicates the importance of getting rid of the ball, citing this as the number one rule for his quarterbacks.

“If you come to a Davis practice, the thing you’ll probably hear me say the most, as I stand behind the quarterback, is get rid of the ball, get rid of it, get it out of your hand,” said Coach Plough.

RELATED ARTICLE: The Top 4 Types Of Quarterbacks In Today’s Offense

It is crucial to be on time with everything. One thing that helps with timing is the 2-slide rule. This means that when a quarterback drops back to pass and then slides up in the pocket, he is allowed two slides and then he must get rid of the football. This also allows the quarterback to trust what he sees and let it rip.

The four most important fundamentals promoted by Coach Plough include the eyes, drop, presence, and accuracy. It is crucial to train the eyes for pre-snap and post-snap reads. The drop should consist of an open shoulder with sound posture and live feet. A strong presence is necessary for quarterbacks, and a way to maintain this presence is by staying calm with subtle movements. Anticipation along with the presence, drop, and focused eyes creates accuracy.

The first thing taught from a mechanics standpoint, at UC Davis, is base. This is a comfortable stance for the quarterback with the feet shoulder-width apart and a slight knee bend. You can throw any ball from a solid base position. 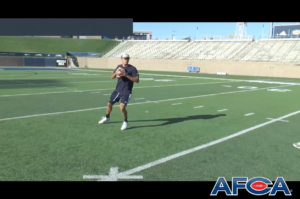 Ball placement is another key mechanic referenced. The quarterback should be relaxed and hold the football in a relaxed position. Coach Plough suggests that all the work should be done below the waist, so that everything above the waist is calm. The football should be held in the middle of the chest (from pec to pec) with relaxed elbows down to the sides, so that the football can go straight to the ear and be thrown accurately.

A six-inch step is another vital piece of the throwing motion. When a quarterback begins to deliver the football, he should take a short six-inch step toward his target. It is important to make sure that front knee stays slightly bent as he follows through with the delivery. A straight leg signifies the quarterback likely took too big of a step.

Couch Plough also showed drill tape and game film highlighting the importance of snapping the back hip through, taking a rocker step, sliding up in the pocket, and taking a five-step drop for deep throws.

There are two types of RPO footwork that Coach Plough uses at UC Davis:

Coach Plough discussed this concept as beneficial for the quarterbacks to understand what protection calls to make. The boundary safety, near safety, and triangle defender make up the string. Whatever direction the string is pulled, the quarterback sets his protection towards that direction.

Coach Plough also took some time to explain the importance of practicing quick off-balance throws since everything in the backfield is not always smooth. He also answered some very thoughtful questions at the end of the session.

To watch Coach Plough’s Virtual Clinic, along with numerous other videos, please log in to your AFCA membership account and search through the AFCA Educational Library.