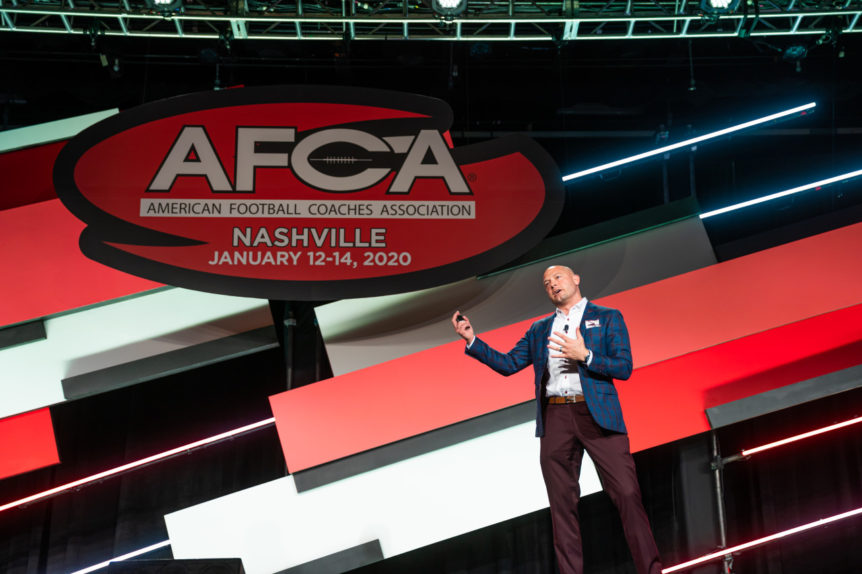 Understand him or not, at the end of the day one thing will always be true about Minnesota head coach, PJ Fleck; he knows who he is and he knows that his demeanor is not for everyone. And what’s more, he doesn’t care. He made that point clear to the nearly 5,000 coaches that came to watch his impassioned speech kick off the 2020 AFCA Convention in Nashville.

Fleck’s career has certainly taken off since his first season as head coach at Western Michigan in 2013 when the Broncos went 1-11. In 2019, Fleck led the Golden Gophers of Minnesota to an 11-2 record, shattering multiple school records in the process.

However, the peaks and valleys of being a head coach is not lost on Fleck, nor is the importance of building a culture that can withstand such highs and lows. Fleck did not shy away from this topic in his speech but instead shared that he loves taking the jobs that people advise him not to.

Fleck can be viewed by some outside the profession as a motivational speaker – a title that he himself said he does not like to use. He prefers to look at himself as a “culture driver,” and he relishes the jobs and situations that others deem too hard.

To someone like PJ Fleck, culture is the basis of everything. Fleck’s obsession with establishing a winning culture is what put him on the map as a collegiate football coach. And now, he’s accomplished that feat at two non-traditional powerhouses. But it’s also what gives Fleck a love him or hate him type of personality.

Fleck spoke candidly about how if you’re going to work for, play for, or be around him, it’s important that you’re on the same page because if not, you’re very likely going to hate him. What makes Fleck different, though, is that he has no problem with you disliking him.

As the night went on, Fleck broke down the mantra that he and the entire Minnesota football program use to define their culture. And yes, they really do have a name for their culture. HYPRR (pronounced “hyper”) may seem like a good adjective to describe Fleck’s outgoing personality, but it actually describes the reason behind everything that the Golden Gophers football team does daily.

While this may all seem like a giant façade, to PJ Fleck it is the foundation of winning, and he has the career to back it up. When he was first hired at Western Michigan, the program had never won a bowl game. In his last year there, they played in the Cotton Bowl and finished the year 13-1. When he got to Minnesota, the Golden Gophers hadn’t won a bowl game in over 50 years. In 2019, they beat #9 Auburn in the Outback Bowl to finish off an 11-2 season.

It’s also worth noting that every year he’s been a head coach, the team’s GPA has risen. When he first arrived at Minnesota in 2017, the team’s average GPA was 3.07. This past fall, the teams’ GPA was 3.21. To Fleck, how you do anything is how you do everything. It’s all connected and it’s all a part of his larger vision. Because of this, every season has a theme, process, and how, and each year it’s different.

Every year, and even every week, the theme changes, but the core message remains the same. In his convention speech, Fleck explained the method behind the madness of taking his team to a Jay-Z and Beyoncé concert and the overall importance of using your culture to deliver life-long lessons to the kids in the program.

Coach Fleck also broke down the messaging and symbolism that he uses to drive the culture home, providing examples throughout the second half of his presentation. Everything had a singular thing in common: HOW was involved (for example, LeHOW James). At the end of the day, to Fleck, the HOW is the most important thing and it must fall in line with your culture.

Develop YOUR Own Culture

All of this to say, Fleck realizes that what has worked for him won’t necessarily work for everybody. You will probably never see a picture of Mack Brown putting up pictures of Rameses dressed up like LeBron James or Batman. As the adage goes, there’s more than one way to skin a cat.

But what is guaranteed is that every single coach in America is going to have to instill their own culture at some point. Whether or not you agree with Fleck’s out-of-the-box thinking and methods? That much is up to you. Regardless, the fact remains that you will have to build your own culture at some point, so it is a good idea to take advice from those who have been where you are trying to go.

So, how do you know if what you’re doing is working?

According to Fleck, there are two easy ways to tell:

And because all things come in threes…

Top 5 Things PJ Fleck Has Learned Throughout His Career

Fleck ended his presentation with five things he’s learned as a football coach. While I will list them in text form below, I highly encourage you to listen to PJ Fleck give this portion of the speech himself.

Coach Fleck’s presentation was broadcast live on Facebook during the 2020 AFCA Convention. You can watch the entire speech below.