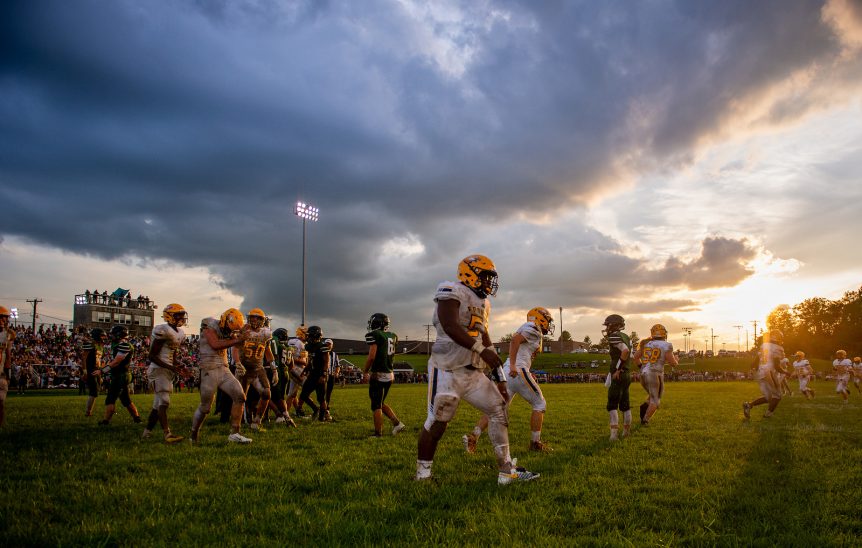 I am Coach Brian Washington of Paris High School in Paris Kentucky, and as I enter my 22nd year as a football coach for the Paris Greyhounds, the school that I attended while I was in elementary, middle, and high school, there’s no place I’d rather be coaching than right here as part of the Paris Family. This is my 8th year as the head coach here at Paris High School.

I actually didn’t see myself being a head coach at Paris while growing up because it was such a privileged position. To be able to man the ship that had such an impact on my childhood as well as middle school and high school career is a true honor. I have to remind myself that I’m the head coach sometime because my childhood mind and the nostalgia of my high school years pass through my adult body; it’s hard not to get a little sentimental. I also have some advantages, as well as disadvantages, of coaching the kids of young men who I played with in high school. I know most of our kids’ family histories. I get to teach today’s generation about our football team’s History, Traditions, and Great Athletes that have sat in the same lockers as they occupy now. It also gives me hope that a young man who may have had the same background as me, and the same upbringings can one day assume the role that I have been given the privilege to do. I always remind my players that a lot of Hard Work has been dedicated to our program, and I was one of those guys who played on that field for this school. So, it’s our job to continue the Tradition!

RELATED ARTICLE: How You Can Successfully Help Your Players In Their Recruiting Process

I don’t quite know how to explain the feelings of walking the same hallways and entering into the classrooms that I once was a part of while I was in high school. It really jars my memories, even more than my college days. The main reason is the same practice field, weight room, and game field that I learned to love the game of football from still exist on this campus. Even though we have these amazing upgrades, I still see this place as I did as a youth. I can even remember my first opportunity to interview as a head coach and I knew that several coaches with more head coaching experience than I had were interviewing for the job. Yet I prayed and put my trust in God and after the interview, the athletic director told me that that’s the best interview he’s been a part of for the past 15 years.

Blood, Sweat, and Tears… on the same field

One of the benefits of coaching in an area that you’re familiar with is that I know most of the young men coming through my program because I either grew up knowing their parents or have some familiarity with who their relatives may be.  It’s good to know you can go to a parent or family member of a player and seek outside help.  I’d say it’s a lot harder for coaches who come from another place and try to get to know and earn the trust in a community that they’re new to.  Yet, coaching in the high school that you attended can also have its hardships as well.  The old saying, “A prophet is honored everywhere except in his own hometown and among his relatives and his own family” holds true.  It seems at times I’ll always just be the guy that everyone knows, who grew up around the block, and there’s nothing special about what I’m doing.  One of the things that I use to think about when I was in college was, “how would I want to be coached?”  Like most athletes up until the point of high school, l we believe our high school football coach is the greatest coach in the world, and even to this day, I get text after games from my high school coach encouraging me on during a season.  I think about all my teammates and classmates and how this sport connected me to so many amazing friends and families, so I try and make sure I create a sense of family with my team. I only have one son, but I had the pleasure of coaching and watching him play for the same high school that I played for, and that is one of the greatest moments in my coaching career.

However, I feel like I’m a father figure to all my former and current players.  My staff and I may be the only male figure some of these young men ever get to experience in their young adult years, so we have to be the example of all the things we’re preaching to them on and off the field.  I remind my players that the effort and commitment I demand of them isn’t just words.  I tell them, “not only am I your coach, I’m an alumnus, and I poured my heart and sweat on that field during my playing days for my school, so I don’t expect anything less of them.”  The one advantage I had as a high school football player during my playing days was that the Paris football team had won several state titles and had gone undefeated on their way to winning those titles, so I had a measuring stick and an expectation when I was playing.  Anything short of a State Championship was unacceptable, yet our program fell on some hard times and kids stop wanting to play football. So, I, along with some former players, decided to go to work and put our program back in order.  It has not been an easy task.  Taking a group of young men who hadn’t won but one game in three years and teaching them how to win and not accept losing wasn’t easy.

When I sit around with some of my old teammates and former players it’s amazing to me how the stories of their playing days become so exaggerated, and they talk about all the, “remember when” stories.  One of the things that I have taken pleasure in accomplishing is that we’ve given this group of young men their own identity.  We’ve played in front of the standing room only crowds; we’ve won bowl games and several District titles.  These young men can now have their own legacy, and not always be compared to guys who played in the 70ies, 80ies, and 90ies.  I will love the fact that somewhere in those conversations when my former players are sitting around telling themselves that they were once masters of the universe, that they will mention a story or two about Coach Washington.  I just hope that, just like me, one of the young men that I coached would come back to this program one day and take off with the mantle and lead the next generation of football players at Paris High School.  I once read a quote by St. Theresa of Calcutta, otherwise known as Mother Theresa, “God doesn’t want us to be successful; He wants us to be faithful,” and that’s how I feel about my coach career.  I’ve had winning seasons and losing seasons, yet through it all, I’ve tried to be a good teacher and ambassador for the game of football.  All I’ve ever wanted for my players and school is for them to know that I care about them and love them.