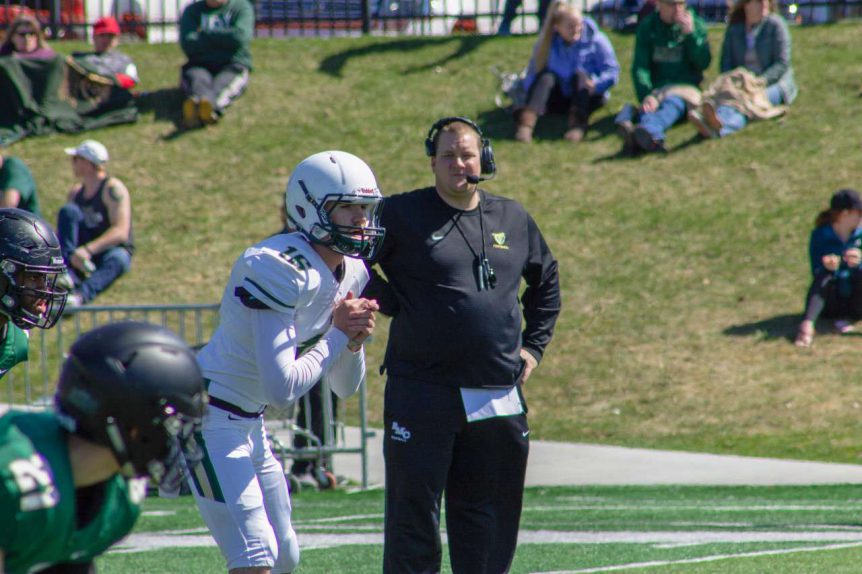 The first category and a very common one is the Game Manager. A modern example of a Game Manager would be Alex Smith of the Washington Redskins (formerly 49ers and Chiefs). He is somebody who has a high completion percentage, a high percentage of his passes are under twenty yards, and he could be dubbed a ‘Check down King.’ The Game Manager knows the ins and outs of the playbook, as all quarterbacks should, and does an excellent job of putting his offense in the right situation.

A Game Manager is a guy who will check protections, opposite run calls, and typically run the play clock as low as he can because he needs all that time to make sure the play is the perfect choice. Coaches love this guy because they know what they are going to get, but this is also the guy who can be timid or afraid to take chances because it might not fit in with a scheme or what the offense typically tries to do. Not to say that an offense does not want big plays and touchdowns, but if a quarterback receives high praise for his ability to check it down to a running back for 5 yards, then it will block the thought and the response in his head to take shots when he has to react in a split second. These guys are smart, and they are rarely risk-takers. Much like Alex Smith, they will provide you with an excellent regular season, but if the team around him is not enough, then he will not be the guy to lead a team to a championship. The example of a Game Manager leading a sound team to the promised land, AJ McCarron in his time at Alabama. McCarron knew exactly what he needed to do, and that was be smart with the football. A three-year starter, with 77 career touchdowns and only 15 interceptions. He was a guy that knew if he could value the ball and let guys like TJ Yeldon, Eddie Lacy, Derrick Henry, and Trent Richardson do all the work while the defense holds up their end of the bargain, Bama would go on to be extremely successful. Game Managers have a place on teams that are extremely well rounded because they just have to be smart enough and calm enough to lead the ship.

If the team lacks on defense or lacks on other positions at offense, there must be a guy behind center that can make things happen when everything goes awry. In steps Johnny Manziel, Baker Mayfield, Mike Vick, and Russell Wilson. The guys who can turn the worst of plays into a first down, an explosive play, or even a touchdown. These are the Improvisers. Guys like this are the ones that might not necessarily have the most extensive playbook knowledge, but oftentimes that does not matter. An Improviser is a quarterback that coaches curse, and then praise all in a matter of five seconds. Athleticism is the strongest trait in this type of quarterback, simply because when things go wrong he has to be able to get himself out of it using his feet before he can use his arm. Over the years of their football careers, they have developed a skill that is extremely difficult for quarterbacks to possess; throwing on the run. Scrambling is a strength of the Improviser, and in turn, it must become a strength of the receivers and offensive line, to stay active during scrambles.

RELATED ARTICLE: Keys to Motivation And Organization From Dick Tomey

Receivers should be adept at getting open when the quarterback is moving, and they naturally will when the quarterback is an Improviser. Like all things, scrambling is a learned skill. It is imperative that the ten other players on the field are just as good at scramble drill as the quarterback is. It can be seen just how difficult of a skill this is when it is the backup quarterback that is the Improviser, and the starter is a more conventional quarterback. Once the starter is out and the Improviser is in, offensive linemen and receivers alike, often forget that they may have to continue a protection or continue a route sometimes twice as long as they normally would. These guys can get used to seeing the quarterback scramble, and the next thing they know the ball is thrown out of bounds and on to the next play. It seems that sometimes an Improviser would rather get sacked for a loss of 15, than to just simply throw the ball out of bounds. It can vary from person to person, but this could be a sign of the quarterback never wanting to give up on a play and being aggressive, or just lacking football knowledge in general, but that is something that could be known before he ever takes a real game snap.

After talking about the guy who can run around in the backfield and avoid sack after sack to finally get a first down, it’s hard to imagine that somebody who runs a 5.0 40-yard dash could also be successful at the same position. Now under center, we have the Pocket Passer. Philip Rivers, Eli Manning, Tom Brady, are the kind of guys that are Pocket Passers. Not a lot of mobility, but often possess a great physical stature and a cannon for an arm. These are guys who are not afraid to throw the ball downfield, and often have an amazing understanding of defensive schemes as well as their own offensive schemes. They don’t exactly move very well outside of the pocket, because they don’t need to. Often times you will see Tom Brady go into the fetal position and take a sack instead of trying to improvise and make something happen with his feet. The reason behind this may be that because of his abilities with his arm, pre and post sack he has made, and will make, enough plays to make up for the couple of times that he may get sacked in a game. It is important for an Improviser to fight each play to make something happen, but a Pocket Passer knows that he will have more opportunities to be successful from the pocket later in the game.

A Pocket Passer is a guy that you want to help build a great offensive line around, and only need to make sure you have decent receivers. Tom Brady is an excellent example of this. He is able to turn average receivers into very good ones, simply because he knows what is going on in the game, and is an accurate enough passer to put the ball where it needs to be to give the receiver a chance to make a play. Not always, but oftentimes this is a kind of guy who has a very high level of knowledge about perimeter play such as route concepts and coverage schemes, and may not know as much about the protections. That is why, as mentioned above, this is the kind of guy you would want to build an exceptional offensive line around, while simply having decent athletes on the outside. A Pocket Passer, as long as he is protected, will be able to drive an offense up and down the field and put up a lot of yards, and most importantly, a lot of points.

Last but not least, we have the Focal Point quarterback. Most of the time this is a dual-threat guy. Since he is the Focal Point of the offense, he will also need to run the ball as well as throw, so to create a balance on offense. Quarterbacks that come to mind in a Focal Point role are guys like Lamar Jackson and Cam Newton. In 2017 Lamar Jackson averaged almost 17 carries per game while averaging almost 35 pass attempts per game. A Focal Point quarterback is the type of quarterback who is a good enough player that the coach will want the ball in his hands as many times as possible throughout the course of a game. A Focal Point has the potential to bust a big run or complete a big pass on any play of the game, which is why coaches like to make sure this guy has as many opportunities as possible to do so. He needs to either be big enough to make sure the amount of hits he will take does not affect him, like Cam Newton, or he needs to be fast enough and elusive enough to make sure he can avoid these hits, like Lamar Jackson.

A Focal Point quarterback is great to build a system around and can win you a lot of games, but if he goes down or is out, a team might find themselves in a hole. Very rarely will a team have Cam Newton as their starter, and then have another Cam Newton to come off of the bench if the starter gets hurt. All around schemes and play calls can be severely damaged if a Focal Point is unable to play, which is why it is very important that they are either big, or fast, or even both.

These four categories of quarterbacks obviously are not enough to cover every single one, but it is a great way to group a guy into a category and know if he will fit a certain system. Coaches always have somewhat of an idea of the ideal quarterback that will help lead their team to pay dirt. At different levels of football, however, it can be difficult to recruit or even find the right type of guy for a certain system. Knowing how to plug a guy into a system and build around him is what makes an offense, and a team successful.

Chris Stutzriem was hired as the 18th head football coach of the Battlin’ Bears in December of 2018. Stutzriem is returning to Rockyafter serving as an assistant at Southwestern Oklahoma State University, an NCAA Division II program, for the past season. Stutzriem had a successful career as a college quarterback, starting 20 games and throwing for nearly 3,800 yards and 36 touchdowns for NCAA Division I Wyoming and Indiana State before finishing his career at NAIA powerhouse Morningside College (IA).