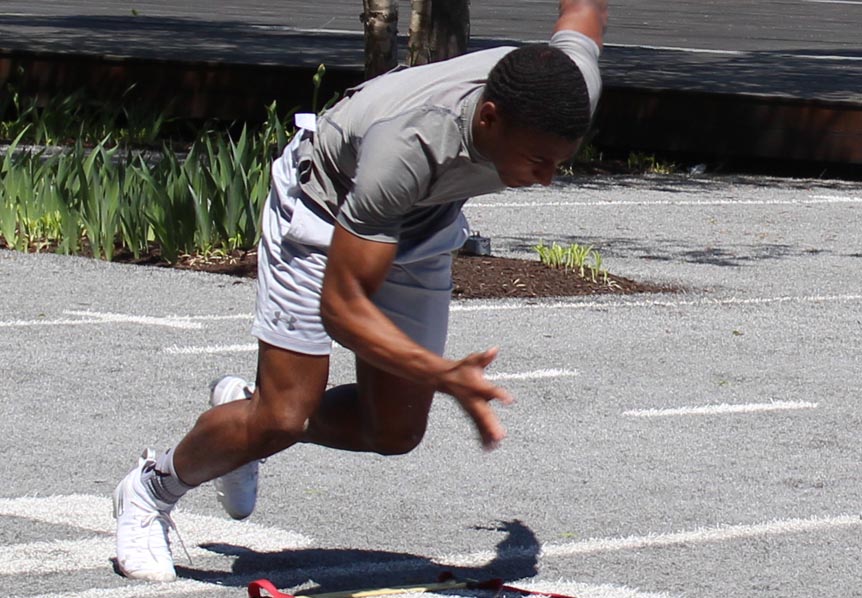 An intrepid explorer ventures deep into the vast wilderness of the American west. Alone with nature, he conserves his energy, subsiding on only the food and water he can carry.

As dusk approaches after a long, arduous hike, the explorer senses he is no longer alone. He pauses to take a deeper look around in the deepening, silent darkness, when a snapping, snarling mountain lion launches its sneak attack.

In this terrifying situation, the human body must summon every fiber of its musculature to react instantly. Protecting one’s self from harm in such circumstances requires the ability to reach deep into the energy reserves and move explosively, putting long-term survival concerns on hold to deal with the immediate threat.

The average human rarely needs to demand such explosive physical performance from his body. For this reason, the human body holds the muscle fibers required for such extreme circumstances in reserve, prioritizing long-term energy conservation over short-term athleticism — a phenomenon called “the athletic exercise paradox.”

Football players, especially those who compete at elite levels, are far from average. They attempt to force the recruitment of every possible muscle fiber every single time they take the field. But many players haven’t been made aware that while they are consciously trying to give it their all, several factors actively restrain them.

“A lot of times, coaches think there is an attitude issue or effort issue,” says Phil Campbell, who has coached players like Julian Edelman, Ricardo Lockette, Ray Lewis and Jerry Rice. “But if you aren’t motivated by Friday Night Lights, well then you aren’t going to be motivated to play football.

In addition to the athletic exercise paradox, athletes must also contend with their instincts to remain upright and maintain proper balance. In average day-to-day life, these instincts are essential. On the football field, they prohibit players from achieving extreme acceleration.

“Your inner ear doesn’t care if you make a game winning tackle or get into the end zone, it only cares about keeping you from falling down,” Campbell explains. “But when you run fast, you have to be willing to push your body out of balance at strategic acceleration points to get your inner ear to adapt and allow you to go faster.”

These “inner-ear brakes” as Campbell refers to them, combined with the athletic exercise paradox, are the chains every football player must break if he is to remove his own personal governor. At the same time, they also present an opportunity, through science-based coaching, to unlock field- tilting improvement in players of every size and position.

“Everybody says you can’t teach speed,” Campbell says. “But you can teach technique that improves speed because nobody naturally does it the right way. Most people do not run with correct technique, even fast guys. Coaching speed is more than just telling an athlete to ‘get low.’ You have to teach him the science behind why he is popping up in the first place.”

To begin coaching proper speed technique, coaches must first understand the difference between drive phase and fly phase. In fly phase, athletes are sprinting in an upright position, which comes more naturally, but still must be coached to achieve peak performance.

Drive phase occurs when an athlete attempts to move as quickly as possible from a still position. Athletes don’t execute proper drive phase technique without being coached, and there are significant issues that must be corrected in the way most athletes move.

“Almost every athlete we have had over the last 30 years has taken two steps they don’t need in the first 10 yards,” says Campbell. “Most untrained players either do a ‘rocket step’ or they take two steps. They’ll reach with their front foot while their body stays up in the air.”

Athletes tend to waste time and energy with unnecessary steps, upright posture, improper arm-swing and other nuances within drive phase technique. While the corrections may seem difficult to manage, Campbell has found that he can teach proper technique for both drive phase and fly phase using just three separate but equally critical drills.

First, Campbell teaches the “leg drives acceleration drill.” This drill helps athletes understand proper body positioning for drive phase, by having them lean over against a wall, fence or treadmill. Once they are in this proper “acceleration position” Campbell teaches them how to properly drive their legs while recruiting all three muscle fiber types, as well as proper ankle dorsiflexion, where the toes are raised up towards the shin.

To help “reprogram” the athlete further, Campbell will ramp up this drill with a resistance band under the foot on one end, and over the shoulder on the other. This “overspeed drill” allows athletes to experience faster movement, giving them a taste of what could be if they apply themselves to proper technique and strengthening their fast-twitch muscle fiber. (See Example 1) 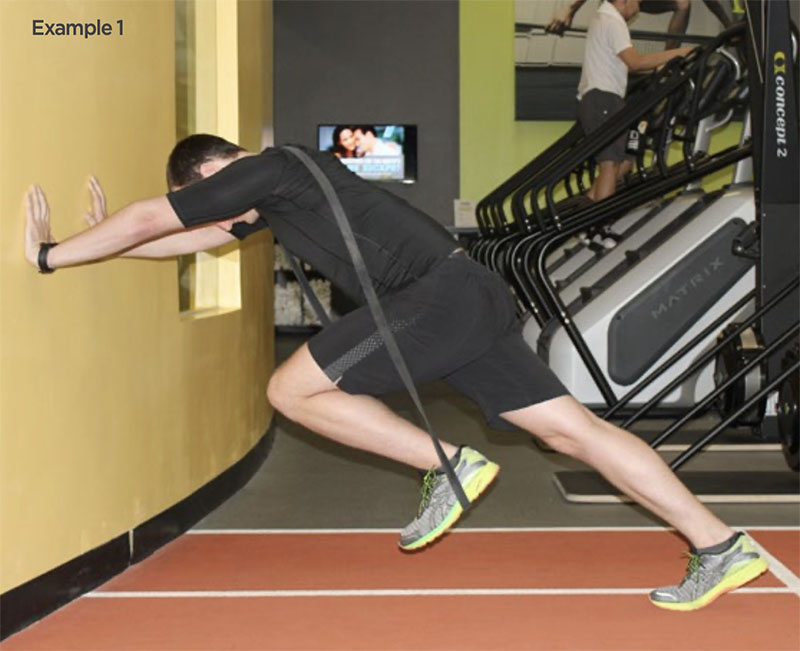 “After doing overspeed drills, the athlete feels as though they have been driving down the interstate doing 90, and now going 70 makes them feel like they are moving in slow motion,” Campbell explains.

The next drill, a mid-foot strike leg cycle called a “claw drill,” teaches athletes optimal mechanics for fly phase running. Standing upright and bracing for balance, athletes practice a cycling movement that shows them how to put more force into striking the ground with the least amount of time invested in the strike, as well as reinforcing the importance of proper ankle dorsiflexion.

The final drill Campbell uses, the “pocket-chin arms drill,” teaches athletes optimal arm position, which is the same for both drive phase and fly phase. During the drill, athletes sit on the ground with their feet in front of them, and pump their arms from “pocket” (ideally several inches behind the location of their back pocket) to chin (See Example 2). The example shows the athlete during a sprint instead of seated, but the arm location is accurate. “Pocket-to-chest arms” is the more natural movement, but produces suboptimal results. 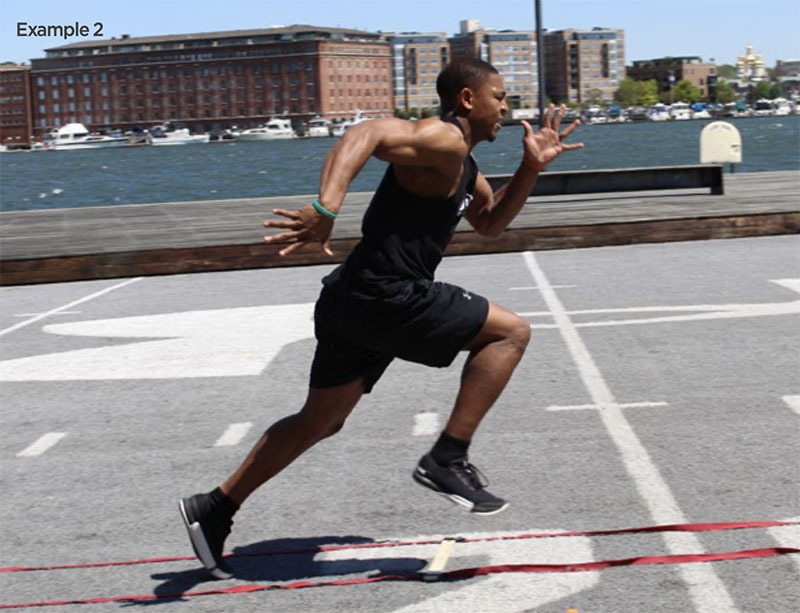 With all of these drills, Campbell says it takes about three reps before an athlete settles into the technique and feels confident about moving faster without falling. Once they feel they can execute the proper technique under control, the real improvements take shape.

For football players, executing flawless technique in drive phase is critical, as the vast majority of sprinting in football is done in distances of fewer than 20 yards. Some positions may go entire games without ever reaching fly phase, but every player needs to be able to move from a dead stop as quickly as possible on every single play.

To apply proper drive phase technique to specific football movements, players must first achieve mastery of the technique both linearly and laterally. Starting from straight- line sprinting, adding in linear movement, and then focusing on position-specific movements provides a crawl-walk-run process that ensures players apply the best sprinting technique to meet the on-field demands of their positions.

It may be encouraging to note that every position in football only executes about 10 movements or less. However, coaches must be intentional about applying proper technique to each movement. Otherwise, the work they put in behind the scenes won’t have the full benefit they seek.

“Getting close to a position-specific movement doesn’t count, so when coaches think all their players’ work in the gym is going to apply, it doesn’t,” Campbell says. “You can’t practice it slow. You can’t practice it half-speed. You have to practice it full speed, three times a week and work all three muscle fiber types.

“Now you are taking a whole team and rewriting default settings in their brain for every specific movement they do.”

To learn more about how to teach your players proper speed technique, read Campbell’s book, “How To Coach Speed Technique,” available on Amazon. In this step-by-step guide complete with drills, diagrams and helpful coaching tips, Campbell outlines the training methodology he has used for decades.