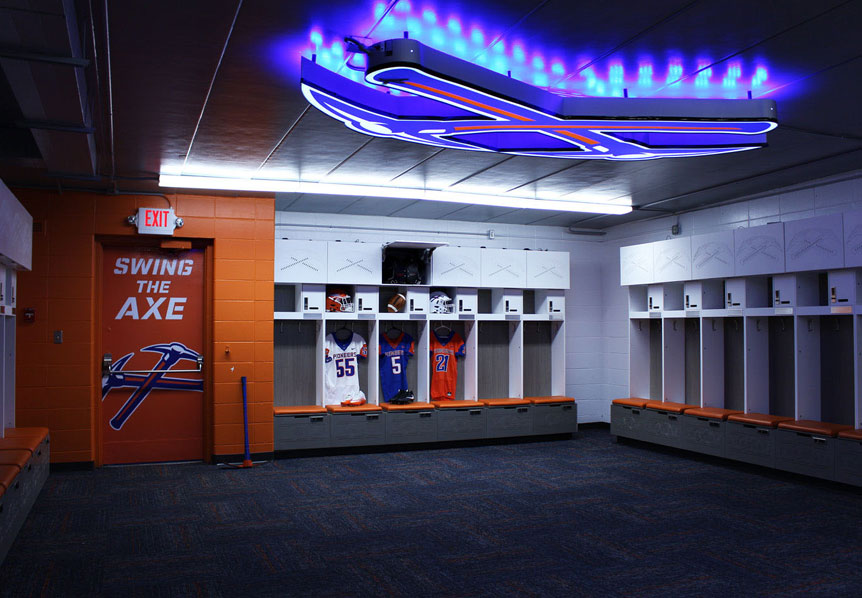 NCAA Division III football is kind of an unusual animal in the world of football. It boasts some really outstanding talent. Players who could have walked on at the Football Championship Subdivision (FCS) or the NCAA Division II level often find room to excel within the “D3” ranks.

That said, NCAA Division III football is also known for its complete lack of athletic scholarships in football. Student- athletes who play at the D3 level know they are playing for the love of the game, while they are there to get a great education. Their commitment is above reproach.

As a result, attracting the right sort of student-athlete — one who competes at his highest-possible level while understanding that he must meet and exceed certain academic standards — is not a job for the faint of heart.

University of Wisconsin-Platteville head coach Mike Emendorfer has coached the Pioneers for 22 years, and he knows the level of competition in the WIAC is fierce. It’s a conference that tends to eat its own, meaning without an at-large bid to the DIII playoffs, winning the conference is the first requirement.

To attract the top talent within the region, Emendorfer knows that the athletics department must focus on delivering a Division I experience within the hallowed halls of a Division III institution.

“Facilities are really important,” he says. “They draw students to your campus. Wellness centers, strength and conditioning centers, those are important. But obviously, the locker room for football was crucial. The locker room we built is named after George Chryst. Along with his family and other great donations, we now provide a Division I atmosphere at a Division III university.”

Commitment To The Players

When players see the facilities at Platteville, they see commitment, and rightly so. After all, the Division III institution is asking for a massive commitment from the players, to begin with. Those players are going to dedicate themselves to the game of football in a conference that tends
to quickly expose weaknesses. They are going to do that at the same time as they commit to achieving a world-class education.

“Obviously, we’re all talking about team culture lately, but showing our athletes that football is important here, demonstrating that we’re building toward our culture, it’s important,” says Emendorfer. “You look at an area where a lot of the players spend time before and after practice, before and after games, it’s the locker room. You talk to former athletes, and they have all kinds of locker room stories. You get to know your teammates in that locker room setting. So if you can create an atmosphere where players enjoy coming into the locker room before practice, and they come in earlier because they enjoy the atmosphere, they engage with their teammates more, and that was another key factor in our decision making.”

The custom lockers that Emendorfer and Platteville secured were manufactured by a company called Shield Lockers. One quick look at their website demonstrates their pedigree, with football customers ranging from the Los Angeles Rams to Penn State, Florida, Arkansas, and many more.

“Obviously, Penn State is going to have a bigger locker room and maybe a few more of the bells and whistles than we do,” says Emendorfer. “But this is the kind of thing that separates us from the competition. Knowing that we’re going to be the only small college team in the nation with this type of locker. 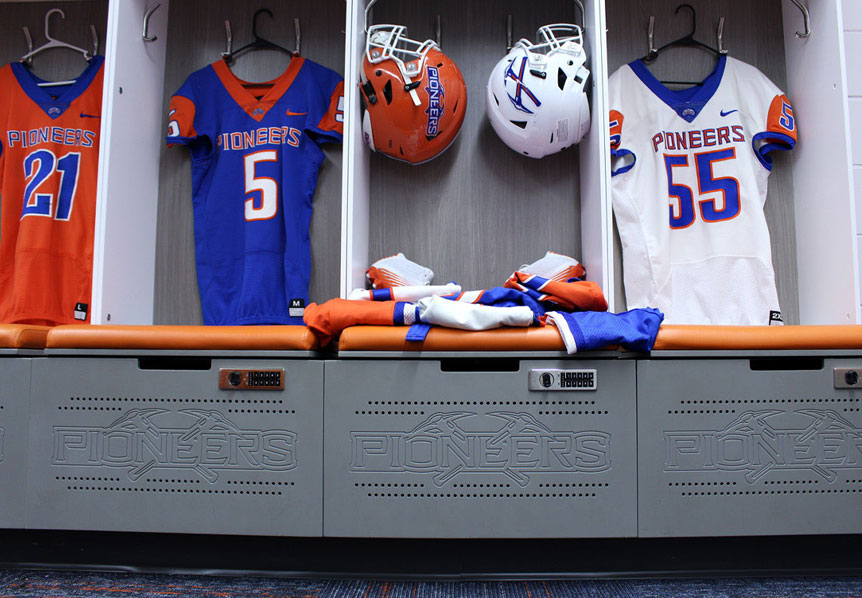 To attract talented players in the already-competitive Wisconsin Intercollegiate Athletic Conference, the University of Wisconsin-Platteville seeks to demonstrate its commitment to football with its new state-of-the-art locker room, previously unseen at the DIII level.

“That ‘wow factor’ is important. It’s about separating ourselves from the competition, but also providing a quality experience for our student-athletes. Our league is scholarship football without the scholarships. Many of our athletes have had opportunities to walk on at some of the MAC schools or Division II schools. It’s a key point, because when you’re competing on Saturday afternoons in our league, the talent is typically going to be a little higher than the traditional Division III. I have a lot of respect for all Division III schools, but I think this state league, no one can argue that it’s the best Division III conference in the nation.”

If you were to cross the southern border of Wisconsin and drive about three hours in that direction, hanging a slight left there at the end, you’d arrive in Champaign, Ill., home to the University of Illinois Fighting Illini and head football equipment manager Trent Chesnut.

As a result, it is absolutely essential that Illinois bring its A-Game when it comes to facilities. In support of that mission, the Illini built and opened the Henry Dale and Betty Smith Football Center in August 2019. The world-class facility clocks in at over 100,000 square feet at a cost of close to $80 million, and is the home for the Illini football program, which includes expanded athletic performance facilities, sports medicine space, coaches’ offices, position meeting rooms, player development areas, recruiting and prospect hosting rooms and — you guessed it — a brand new locker room. 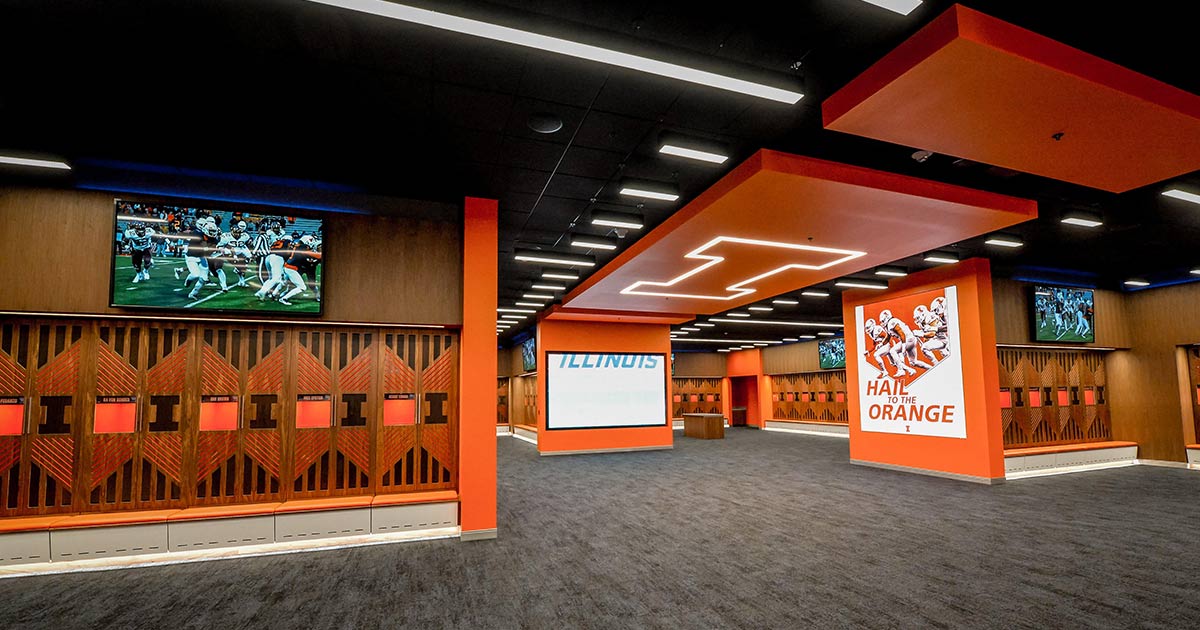 Expectations among student-athletes, administrators and coaches continue to soar ever higher as locker rooms expand their role in recruiting. With everyone inside the program spending so much time within athletic facilities, departments are spending more to demonstrate institutional commitment to the athletics.

Illinois desperately needed to upgrade in the ever-expanding arms race that is football facilities. The facilities of today bear little resemblance to the three-decade old facilities they replaced, except to the extent they are somewhat more conservative in nature, which is on-brand for Illinois. Certainly, the Smith Football Center demonstrates the same desire, the same commitment shown by football programs all over the country seeking to prove to recruits that this is their new home.

The locker room is a beautiful jewel in the Illini’s crown, but it’s also highly functional, says Chesnut, who enters his 22nd season with the Illini in 2021.

“The functionality of it is what’s key,” says Chesnut, whose program ultimately chose B Sport Custom Lockers to manufacture its custom lockers. “Obviously, you need to have the looks and aesthetics. And you can spend $1,000 to $10,000 per locker, and there’s a broad spectrum of bells and whistles. But this is the Big Ten, the University of Illinois. We have a traditional sort of look. What ended up being built for us, it’s just above and beyond what we had previously. It’s outstanding.”

Chesnut specifically points at not only the quality, but the different types of functionality they were able to incorporate into the lockers.

On top of all that, the facilities boast players lounges, bowling, giant TVs’ located everywhere, a barber shop and even a miniature golf course.

“Because of COVID, we’ve played only one official round of golf,” says Chesnut. “Right now, I’ve got the course record. I won it by two or three strokes.”

CHECK OUT THIS ARTICLE: Division II Mavericks Upgrade to Division I Locker Room

Incoming head coach Bret Bielema was blown away by the locker room when he first toured it with his new athletic director, his wife and young children.

“I had seen the facilities online, obviously, through a video presentation, but it doesn’t do it justice like when you walk through those doors,” he says. “When you walk into the building itself, you see the weight room and see the openness of that. You see the main lobby, and you have to say ‘Wow!’ It all looks sharp aesthetically. Then, when you walk into that locker room, it’s huge. The details in the lockers, the walls, the ceilings. I can’t say enough. I was very fortunate to walk into this building. I give a lot of credit to Josh Whitman, our athletics director. He’s the constant in all of these decisions. It was Josh who had the foresight to see we needed to make this next step.”

These days, just because you need lockers “right now,” doesn’t mean you have to sacrifice quality. Steve Troyano works for List Industries as product manager for wood and phenolic lockers. Though he is not a coach, he is a consummate professional and knows as much about the details behind locker installs than today’s defensive coordinators know about the importance of creating turnovers. 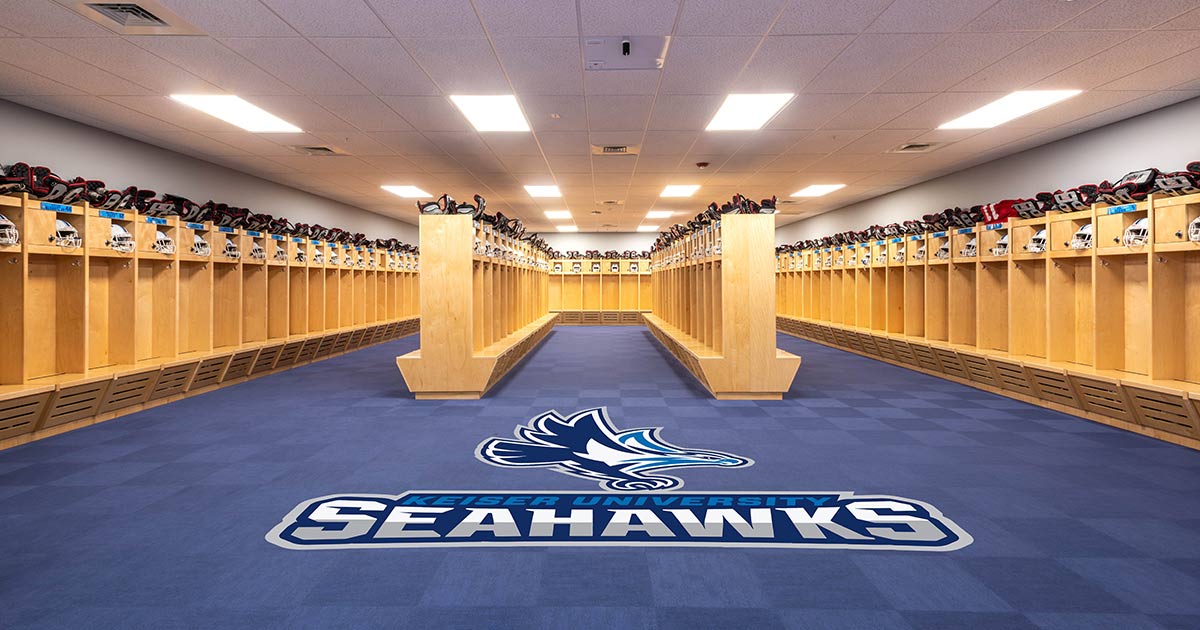 Just because you need lockers fast doesn’t mean you have to sacrifice quality. Suppliers like List Industries are streamlining the process for ordering, shipment and installation on quick-ship lockers like those pictured here.

List Industries has turned this constant and necessary demand into something special by taking a custom locker with many of the accessories featured in today’s high-priced locker platforms and turning it into a quick- ship locker. Meeting this demand with its Recruiter 2 Custom Wood Locker is now down to a science, and List Industries has seven distribution centers across the country to quickly serve customers.

“We can ship between one and 25 lockers from our distribution center in Munster, Ind., in a week,” says Troyano. “Anything from 26 to 50 lockers takes about two weeks. With those lockers, we can add name plate holders, black seat cushions, shoulder pad holders, locking mechanisms — digital or MasterLock — all in a setback model that’s 24 inches wide by 24 inches deep by 84 inches tall.”

Additional custom options include engraved school logo, full-color UV logo, corner fillers, front fillers, and USB outlet in the security box, and 96 of them can show up on a 53 foot trailer, ready for install.

Locker rooms are truly amazing facilities nowadays, and if any of this sounds like a sales pitch, well, imagine how it sounds to a recruit deciding if he’s willing to invest a large majority of his time and energy over the next four or five years in a given program. When it comes to identifying a program that invests in itself and its student- athletes, locker rooms and other facilities can prove the messages that coaches and recruiters traffic in.

“I was in NFL football for three years, and there’s nice buildings and a lot of money, but it’s not nearly as important there to have that recruiting feel to it, to have that selling point,” says Bielema. “Here, to not only have a building that aesthetically looks the way it looks, but also have functionality of it, it’s a game-changer.”