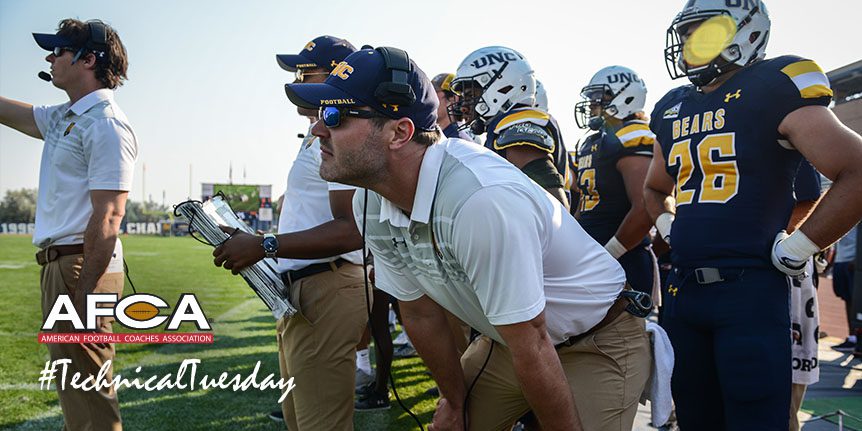 Much of my coaching philosophy has been molded by my own experiences as a player at various levels. Having seen cultures shift dramatically in both directions during my playing career, I learned to redefine success by focusing on the process rather than the outcome, turning moments into memories. To me, special teams is a collection of moments, and my goal as the coach is to help my players be prepared for the moments they are given. My experience as a former high school wrestling coach has also significantly influenced my coaching style. When my wrestlers would step on that mat, there was nothing more that I could do for them. They were out there alone and had to figure it out on their own. As a football coach, I take great pride in empowering my players to combine their athleticism and instincts with my teachings, and I am always happy to see it carry over during a game. I strive to see big plays on special teams units that I know will in turn create a lifelong memory for my players. All of my teachings & drills are designed to empower players to embrace the moment and create lasting memories of their own.

Time is the most important resource in special teams drill planning. At camp and in spring ball at the University of Northern Colorado, special teams is allotted two 10-minute periods each practice. Each slide presented in this article is a 10-minute period. I find the following progression the most efficient way to get the players competitive. Once they are competitive, I am able to get a true evaluation.

Each spring and fall camp, special teams is built from the ground up, with each player getting a chance to be evaluated and developed, regardless of his previous season’s standings. Players are divided by jersey colors (offense and defense) and asked to choose a player within their position group as a “sparring partner”, which will be their partner for the remainder of camp and possibly into season. I ask players to choose a partner who they believe will push them, compete with them, and hold them accountable. This allows me to make the most of my time allotted for special teams during practice. I rely heavily on film and delegation of staff in order to work efficiently during practice. With limited field time, I maximize reps by only making small corrections during practice, then using my office/teaching time to evaluate film and make corrections that are more glaring. Per the punt teach diagram, groups of partners face one another, demonstrated by the dots, with groups working out every 5 yards starting from the 30-yard line. Offense and defense will split the field, represented by blue and yellow dots, respectively. I use this formation to go through the following drills to install the base teachings of our front line on the punt unit.

Drill #1: Jump Stance – Each player will start with his inside foot’s toe and outside foot’s heel placed on the yard line to create a slightly staggered stance. Each player, working out of his staggered stance, will jump as high as he can for several reps on the whistle. After a few jumps, the players are then instructed to stop at the bottom of their jump, the point right before they begin their vertical explosion. This allows the player to dictate the point at which THEY are most explosive, rather than instructing a specific position that can be unnatural or uncomfortable to each individual athlete.

Drill #2: Punch – In this drill, we are working the front-side technique for punt coverage. Players are taught to defeat the rusher who has outside leverage. Out of the jump stance, players drive off their inside foot and take a power step with their outside foot. Stepping at the rusher with his hands and eyes aiming for the near chest of the rusher, delivering a blow while driving their feet, and widening the defender by a yard or more.

Drill #3: Cutoff –In this drill, we are working the backside technique for punt coverage. Players are taught to defeat the rusher who has inside leverage. Out of the jump stance, players drive off the outside foot, stepping with their inside foot, working laterally to cut off the rusher before winning through the rusher’s inside number, striking with both hands on the inside chest of rusher. A successful block will stop the rusher’s feet and force the rusher into the outside gap.

Drill #4: Huddle Cadence – This drill teaches the pre-snap routine and operation of our punt coverage. The rushing partner will now start at the 35-yard line while the punt partner will start 5 yards back at the 30-yard line. The punt partner will break the huddle and sprint to the line, working to get set and quickly defeat an inside rush or outside rush based on the call. This allows us to develop the timing and mechanics of the operation. Once you reach this part of the drill, it is repeated until the period runs out to maximize reps on film. The following day we continue to build and enhance punt teach by breaking it up into smaller, more position-specific segments. I utilize other coaches on staff to assist in the teaching of each segment, breaking them up into right side, left side, back end, and returners/gunners. Being able to delegate and break up into smaller groups allows us to become specific in our teachings, as well as resolve any issues with technique in a more isolated setting.

RELATED ARTICLE: How to Implement Important Fundamentals Of Punt Return

The right and left sides work the front-line techniques. While still utilizing partners, we continue focusing on enhancing skills with both front-side and backside blocks. The back end works the mechanics/operation of punt as we incorporate the blocking scheme of the shield. Returners will catch and field footballs kicked from the back-end group, working on the mechanics of sprinting to the spot and not fading back on the catch. The gunners will start 5 yards away from the returner with a gunner on each the hash. The gunners will work to maintain this distance with vision on the returner’s hands. As the returner starts the process of the catch, his hands will raise, signaling to the gunner to trigger and cross the face of the returner. This part of the drill enhances the gunner’s vision at the catch by allowing him to avoid penalties, see the returner’s mechanics, and when he should take his shot in coverage.

To compete we must train both sides. Now that we have taught punt, we will transition to the base teachings of punt return. We continue to utilize partners as we begin to work on punt return. Punt return can be broken up into two phases.

Phase 1 – Winning at the line of scrimmage is about seeing the front numbers of the cover player’s jersey.

Winning at the line of scrimmage will work off the sideline at the top of the numbers and in between yard lines.

Phase 2 – Winning at the tail end is about the return player making a legal block while seeing only the back numbers of the cover player’s jersey. We will break up our teaching into both of those phases.

Winning at the tail end will work out of the end zone with three groups on each side of the returner.

Below are some winning-at-the-line-of-  scrimmage drills.

Phase 1 – Drill #2: Trail – This drill begins by working the mirror drill on the first whistle. On the second whistle, the cover player releases down the yard line designated by the coach. On this release, the return player will work to get into the trail position, where the return player will get his near hand and eyes on the near hip of the cover player, keeping that position through the hash. The tempo is slowed down to 80 percent for teaching purposes.

Below are some winning at the tail-end drills. This is a difficult position because the return player’s eyes are facing the back of the cover player they have to block. It is my hope that you will be able to implement these drills into your upcoming special teams preparation. After completing these drills and getting players to a point of competition, I continue to build upon that culture. My methods on special teams are simple, but I take great pride in the execution. I focus on the competitive aspect in order to help my players enhance their own skills, while always finding a way to keep it fun, as I believe that enjoying the process leads to inspired players. If you are ever in Colorado, come up and see us at UNC.

In 2018, Bryan Cummings begins his fourth season as special teams coordinator and third as the linebackers coach at the University of Northern Colorado. In the past three seasons, zero points have been allowed by any of his special teams coverage units. His players have combined for five Big Sky All-Conference Honors, including back-to-back Special Teams Player of the Year awards. Cummings comes from Alabama A&M where he was the special teams coordinator and defensive line coach. Prior to his stint with the Bulldogs, Cummings was at Texas A&M where he served as a special teams quality control assistant. Cummings mentored Heisman Trophy winner Johnny Manziel and coached in the 2012 Cotton Bowl, as well as the 2013 Chick-Fil-A Bowl. In his two seasons there the Aggies boasted a 20-6 overall record. Cummings also has experience at the high school level, serving as an assistant coach at New Bern High School in New Bern, N.C., and Canisius High School in Buffalo, N.Y. He got his start at the University of Buffalo in 2006 as a Defensive Intern/Student Assistant. Prior to beginning his coaching career, Cummings was a four-year starter as a linebacker and on special teams at Buffalo.