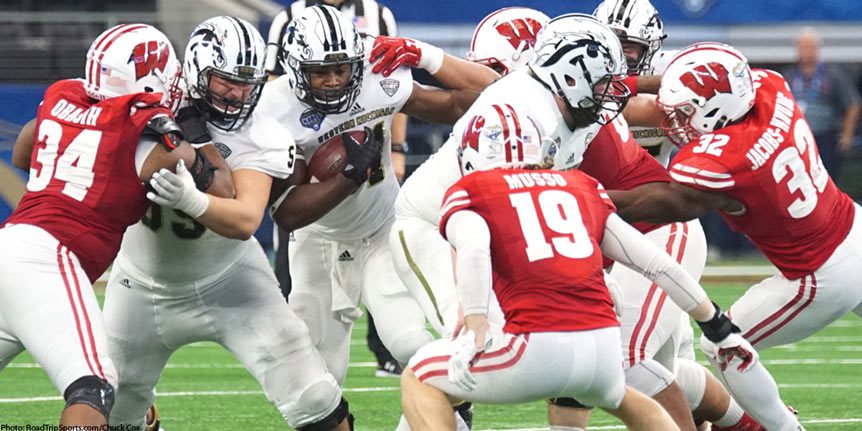 In the on-going battle between coaches ‘with the dry erase marker last’ many of those on the defensive side have become disciples of the 30-front variety. Whether the 33-Stack, 3-5 or 3-4 the general agreement is to use a defense intent on attacking and conquering the various forms of spread schemes drawn up by those on the offensive side of the ball.  Naturally, the success of the spread offense means assistants from those winning programs move on and implement their own particular brand of the spread attack.

Just as defensive staffs get to feeling good about the zone blitz and disguised secondary coverage schemes along comes an opponent running the traditional Wing-T. Sure, spread teams will run the ball – and many even employ many Wing-T rushing principles – but in many ways it ‘just isn’t the same.’ Many spread teams don’t know there is such a position as a tight end and some spread coaches would break out in hives if there weren’t at least two receivers lined up more than 10-yards from the offensive tackle. Here’s the point! The Wing-T is one of the most formidable offenses to face. Unless a coach is blessed with an overwhelming talent advantage, maintaining 30-front integrity can lead to disaster.

RELATED ARTICLE: Defending the Spread at All Three Levels

The Wing-T is an offense capable of attacking with all four members of the backfield. The offense does this through varying its attack, primarily with misdirection and motion running plays to set up a limited but effective play-action pass game. The offense forces the defense to protect the left and right tackle flanks as well as the interior. In simplest terms, it is an offense which requires defenders to be disciplined and to follow their designated assignments.

While there are a few additional formation variations, Wing-T teams tend to use these three traditional sets:

There are two schools of thought to follow. Plays to be run out of wing back motion and plays to be run without motion. Throughout the years, it’s been recognized when there is ‘no motion’ the offense will attack the tight end/wingback side 80-percent of the plays. (Wing-T coaches will adjust to a two-TE, Double Wing set if having difficulty out of other formations, as it can further confuse defensive reads.)  Run plays will include buck sweep, power sweep, fullback trap, counter, weakside Iso and inside reverse to the wingback.

Likewise, when there is motion 80-percent of the plays will attack the ‘open’ side. (Thinking of the double-tight, Double Wing set again, defensive coaches would need to also consider whether the field/bench side is considered ‘open’ sided.) Run plays will include buck sweep, power sweep, crossbuck, triple option, and jet sweep.

When preparing for any offense defensive coaches want to do so within the normal framework of the team’s defensive system. The eleven best players for the 30 scheme will be the same eleven best players to beat the Wing-T offense. For purposes of this discussion, the diagrams and defensive sets are based on 3-3-5 personnel but these sets can be adjusted for any defense running 30-front principles without a worry. One of the benefits of the 3-3-5 is the ability to create ‘looks’ by stems and shifts. For defenses familiar with this, the two defensive sets to use against the Wing-T – ‘Thor’ and Sic’em’ – can be easier to install.

Thor turns the 30-Stack into a five or six man front (if the offense is in the double wing formation).  Here are the position breakdowns:

Will LB – This player is the ‘key’ to running both Thor and Sic’em. Much of the Wing-T depends on running wide and in the ‘B’ & ‘C’ Gaps near the Tight End. In this alignment, the Will must be strong enough to neutralize the tight end and quick enough fend off a down block from the wingback. He will align ‘Head Up’ on the tight end, in a good 2-pt. stance. The Will’s primary job is to stuff the TE and clog up the area. No doubt, this is the job for the toughest linebacker.

Nose – The Nose is in a 1-Technique and has his outside shoulder aligned with the inside shoulder of the backside guard.

Rush – The Rush, or weak side End, has is inside shoulder aligned with outside shoulder of the backside tackle (5-Tech).

Archer – The Archer (strong side spur) is on the line of scrimmage with his inside shoulder aligned with the outside shoulder of the Wingback.

Lance – The Lance (weak side spur) is 2 yards outside the last man on the outside of the o-line (If two wings, he is aligned on the line of scrimmage with inside shoulder on outside shoulder of Wing).

Mike LB – 3 Yards off the ball, stacked behind the Nose.

Strong Corner – Aligned 3 yards in back of Archer.

Free Safety – 6 Yards back, stacked behind the Will.

Sic’em is a change-up to Thor. It can be an audible or actual play call by the defense. For this article, let’s consider it an actual huddle call with defenders originally aligning in Thor and shifting to Sic’em as the quarterback steps under center. Here are the position breakdowns:

Will LB – The Will aligns ‘Head-Up’ on the tight end and will stay put when the ‘shift’ is called.

Sam LB – 3 Yards off the ball with outside shoulder aligned with inside shoulder of the offensive tackle, shifts down to a 2-Tech (‘Head-Up’ up on Guard).

Nose – From 1-Tech (outside shoulder aligned with the inside shoulder of the backside guard), shifts to strong side shade on Center.

Let’s remember the 80-percent rules here. When the wingback doesn’t motion, there is a high possibility of the play coming to the wing/tight end side. Whether in Thor or Sic’em, when there is no motion the defense will slant to that side. When there is motion, the defense will slant toward the motion. The Sam or Mike backers are the best players to use in determining the slant call. Clear communication is a must.

Man-to-man is the basic coverage with Thor and Sic’em. The strong side cornerback would have the wingback coverage. The free safety would pick up the tight end when he releases downfield. The Lance (weak side spur) would have the halfback/wingback to his side. The wide receiver would be the weak side cornerback’s responsibility. With the wingback motion, the free safety would move in the motion direction to pick up the halfback or opposite wingback while the strong side corner, with the wingback motioning away, would adjust to cover the tight end. If the offense is in a double-tight set, the weak side corner would have coverage of the tight end.  As waggle is a Wing-T staple, the coverage of the fullback releasing after the inside run-fake would be the nearest linebacker responsibility.

Sean McCormick has been coaching football in the Cincinnati area for nearly two decades. Currently the varsity defensive line coach with Archbishop McNicholas High School, McCormick has also been the defensive coordinator for Summit Country Day and Aiken high schools. At Aiken, his 33-Stack defensive schemes led to ’10 Defensive Touchdowns’ in a single season, contributing to the Falcons first-ever state playoff appearance. For two seasons, he was the head coach of the Xavier University club football program. Sean is an adjunct instructor for the Ohio Media School, Cincinnati campus and has been a writer and broadcasting professional for 37 years. Sean has written football and leadership articles for American Football Monthly and Coach and Athletic Director magazines.