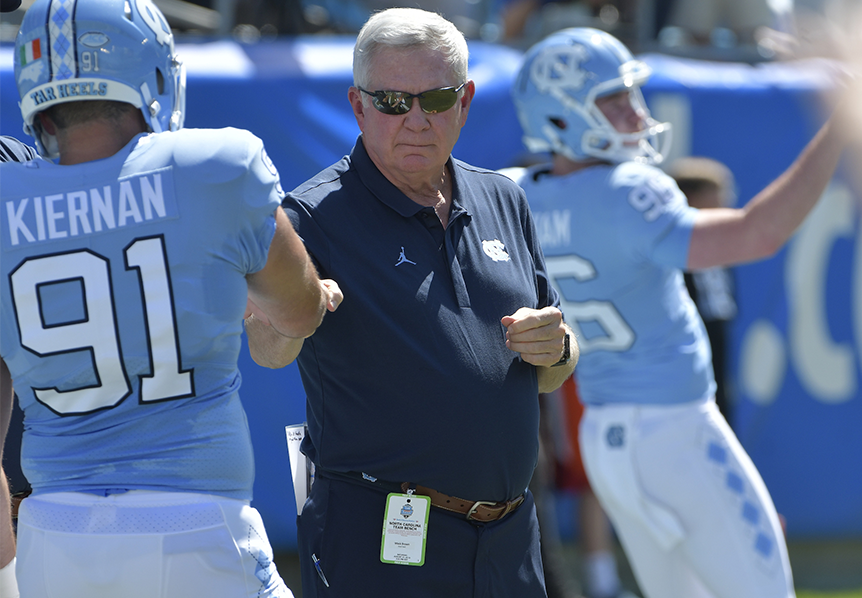 The University of North Carolina’s Head Coach Mack Brown delivered a message outlining how to build a successful football program, at any level, during the 2021 AFCA Virtual Convention.

Coach Brown recently finished his second consecutive season with UNC where he led his team to the Orange Bowl. Few coaches have accomplished more than Coach Brown. These include the 2006 National Championship title, 2005 Coach of the Year award, 15 bowl wins, and 253 total wins as a head coach. As a result of his historic accomplishments, Coach Brown was inducted into the College Football Hall of Fame in 2018.

Throughout Coach Brown’s session, he outlined several building blocks that coaches should use within their program to help set up success on and off the field.

Early in his session, Coach Brown stresses the importance of incorporating good leadership by the head coach. He talks about how it’s easy to be a coach when you’re faced with little to no pressure, but then goes on to explain that when the pressure is turned up, not many coaches are able to thrive.

“You’ve got to be the guy that takes a crisis and turns it into a positive because as a head football coach, you are going to have crisis all the time. And if you are afraid of those crises, then this is not the job for you. You have to lift it up and make it better.”

Coach Brown knows how to handle pressure as he has firsthand experience while coaching on some of college football’s biggest stages. Great leaders are those who prepare for the challenges ahead, so you know what to expect when they come your way.

“If you’re prepared, you don’t have to be afraid. You’ve got confidence because you know what you are doing, and you don’t feel pressure.”

One of the most important elements for a well-run football program is being able to strongly communicate with one another. Coach Brown talks about the need to be a great listener in order to be a good communicator with others. By listening to others, you better understand their needs and you can then better communicate with them.

If players and coaches are not on the same page, then the team will fall short of reaching their full protentional. Communication is vital and can be the difference between winning or losing on gamedays. The strong communication that Coach Brown has with his players has helped develop a level of familiarity and comfortability with one another which has led to quick on-field success for UNC over the past two seasons.

“Make sure all parties understand the defined description and task at hand. It’s not what you SAY, it’s what they HEAR.”

One of the first things that Coach Brown did when he was named head coach at UNC in 2018 was listen to his players and ask them what he could do to improve their experience in the football program.

That’s exactly what he did. He listened to his players’ needs and got them not only what they wanted, but ultimately, what would help the team be successful. Every time Coach Brown delivered on his promises and stuck to his word, the trust that the players had for him increased.

Trust and respect go hand in hand. Coach Brown stated, “when they start trusting you, they’ll respect you more.” You cannot earn the respect of any player or person in the football program if they don’t trust you first.

Coach Brown highlighted the importance of working together with a common purpose so that everyone within the program works towards the same goal. The three common purposes that Coach Brown has while coaching is to have fun, win, and prepare his players to be successful for life after football.

It is the head coach’s responsibility to clearly make known to everyone within the program what the common purpose is, so everyone is on the same page and working together as one heartbeat. A team working as one will always be stronger than a team working individually.

To watch Coach Brown’s Featured Session, along with numerous other videos, please log in to your AFCA membership account and search through the AFCA Educational Library.