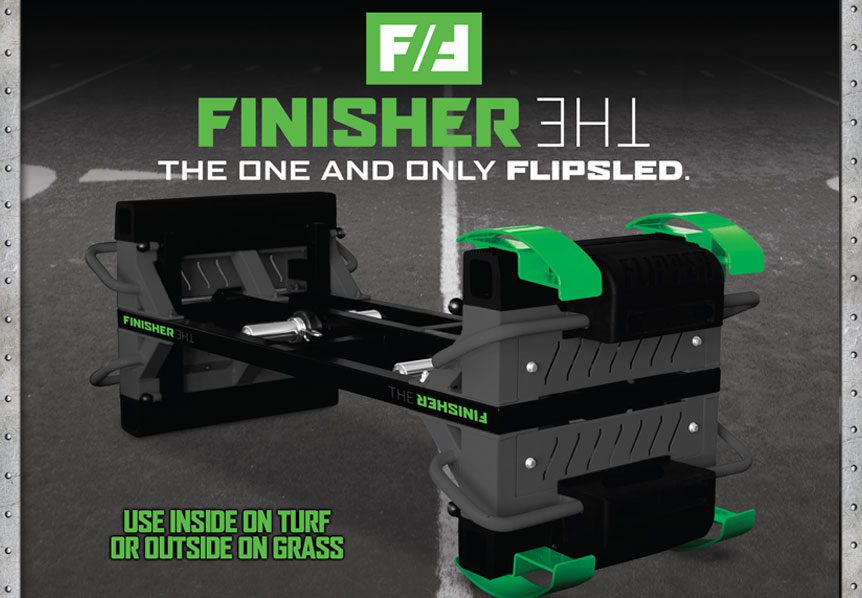 A good strength and conditioning program is the backbone of any football team worth its salt. But one question seems to come up over and over again as coaches across the country scheme how they can transform young, unproven players into battle-hardened warriors…

“How can we connect weight room training to how we finish on the field?”

Enter The Finisher FlipSled, a raw functional training tool that seamlessly combines multiple football-specific movements. The Finisher FlipSled converts from a sled, to a wheelbarrow, to a tire flip in seconds. These movements help players build the functional strength necessary to execute the fundamental blocking and tackling of the game with explosiveness and efficiency.

More often than not, the outcome on the field comes down to players winning their one-on-one matchups. Football, more than any other team sport, requires players to physically dominate the man across from them, which is exactly what The Finisher FlipSled is designed to teach them to do.

Weighing in at 260 lbs unloaded, while offering a maximum capacity of up to 690 lbs, The Finisher FlipSled ensures that individual players of all sizes and abilities are put to the test. In addition to its ability to be tailored to the individual, it’s also perfect for team-building, easily lending itself to relays and team challenges that stoke the fires of healthy competition. “To go from a wheelbarrow carry into a tire flip, all within one movement just shows the versatility it has. It’s the only piece of equipment on the market that can do that. Everything you do on The Finisher you’re finishing like you’re on a football field.”

Greenway knows a thing or two about finishing. In his decade-long career with the Minnesota Vikings, Greenway only had one season where he didn’t play in all 16 games, while making over 1,100 combined career tackles. Check out the video below to hear more from Greenway and see a few of the ways The Finisher FlipSled made a believer out of him.

Watch The Finisher FlipSled In Action!

Nothing has the potential to hurt a football team more than an inability to finish. Unfinished blocks, tackles, runs and routes lead to unfinished drives, turnovers, losses and ultimately – unfinished business that will haunt a program all offseason. Make sure your players are finishers, with the only tool specifically designed to remind them of the cost with every single rep.