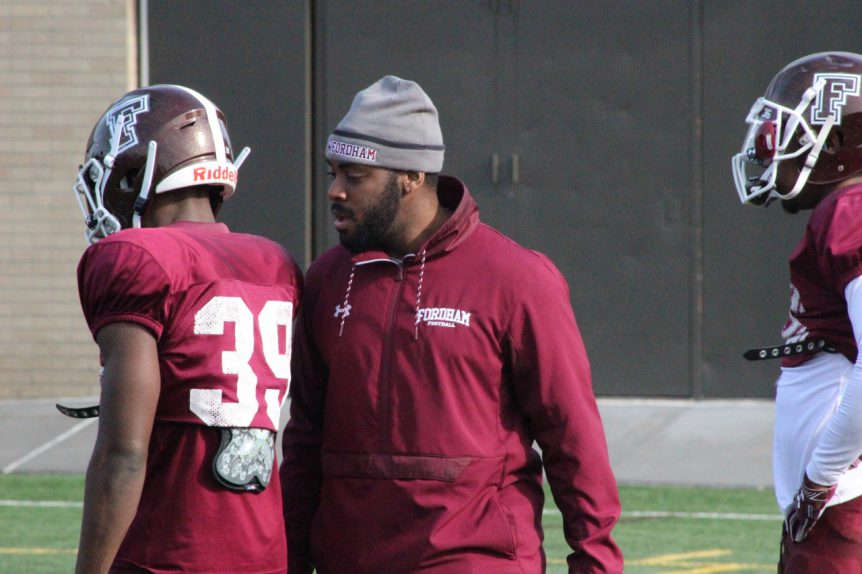 What is a stem? The stem of a route is the direction of a wide receiver’s release off the line of scrimmage that puts him in the most advantageous position to complete the route. A stem can look different every play depending on a defenders leverage or the defense played. A stem is one of the most instrumental actions that a receiver uses to complete and win a route.

Inside stems are most commonly used by the X and Z receivers, or the most outside receiver. However, with the advancement of spread football, all receivers can use this type of stem. In my room, when we identify an inside stem we automatically think three routes: Curl, Dig, and Post. Yes, there are other routes that can be run after an inside stem, though, these are the highest percentage performed routes. There are two ways we determine whether the route is a curl or dig versus a post.

Outside stems are used primarily used by H/Y receivers, or most commonly known as, slot receivers. Though, they can also be utilized by outside WRs as well. For simplicity purposes, we will talk about the routes expected when an outside receiver uses an outside stem or releases vertically. When we identify an outside stem/vertical release we automatically think two routes: Fade and Comeback. Once again, there are other routes that can be run, but these are the highest percentage of performed routes. There are two ways we determine whether the routes are a comeback versus a fade.

During a study that was conducted from a 14 game season that involved over 500 pass plays, we found that 95% of the time the stem direction is the direction of the wide receiver’s route. Our original hypothesis was that on average 65% of the routes would be in the direction of the stem. This difference was staggering to us. I also did a study on the amount of time it takes a route run opposite its stem to be completed. I found that a route run opposite of the stem increases the wide receivers route time by an average of 0.4 seconds. This makes a major difference when talking about the increase of time that is given to the pass rush and the distance of the pass. This also helps a cornerback, or safety, when understanding that they do not have to be impatient when covering this particular route. This will lead to better footwork and technique from a defensive back because of this increased understanding. Something I stress every day to the defensive backs is that football is geometry and time. How fast can a pass, run, or player get from point A to B.

Drills for Playing Against the Stem

I use five fundamental drills when working to defeat the steam. They include: Weave Setup Weave, Weave to Break, Weave to Fade Partner Weave, and Talk Outs.

This is a great warm-up drill for our guys. We use weave setup rather than weave back and forth because we believe it is more realistic. There are very few times when a defensive back weaves two directions in one play.

This drill is performed in a box set up by cones. We use a weave to break because it emphasizes covering the curl and the dig. The focal point of this drill is to ensure the defensive back does not extend out of the cylinder.

This is a great transition drill. It forces the defensive backs to flip his hips after going the opposite direction.

This is one of our favorite drills because it puts the responsibility on the defensive back to become the teacher. This allows me to coach to see if the player is retaining the information we have previously gone over. I would strongly recommend making this drill part of your pre-practice routine. Playing the Fade and Comeback

A large number of teams in recent years have changed from playing off man to press man. I, personally, am a still a believer in off man because I believe in making the offense have to take a hitch all the way down the field. Fades and comebacks will be thrown against an off corner, which means that technique on playing these routes must be reemphasized over and over.

First Indicators of the Fade/Comeback

In my previous section, I spoke about stems. This still applies to the recognition of the fade and comeback. How we determine whether the routes are a comeback versus a fade is:

Once a player has identified the fade, the defensive back must do everything he can to impede the wide receivers vertical progress. There are an abundance of ways this can be done, but I have broken this down into three technical pieces: explosive hip flip, aiming for the top shoulder, and leaning on the wide receiver.

The first aspect is Explosive Hip Flip. When a defensive back has had their cushion broken, they need to expeditiously flip their hips while maintaining a low center of gravity. I talk about always getting back to a position of power. Many times you will see DB shuffle when they open up, which can lead to problems. One problem is that you cannot shuffle as fast as a wide receiver running full speed. The second is when breaking on any other route the defensive back will have to sink their hips in order to get back to a position of power. This is what I define as a wasted movement. This one false action could be the difference between an interception and a pass breakup.

The second aspect of playing the fade is Aiming for the Top Shoulder. After the hip flip is completed, the defensive back needs to bring his focus to the wide receivers top shoulder. This is what I call the point of intersection.  This is also beneficial for playing the comeback because you are already moving your body in the same direction as the route.

The third aspect of playing the fade is Leaning on the Wide Receiver. Once the DB has gotten to the top shoulder he must slow the wide receivers vertical progress. This can be done by leaning up and through the wide receivers top shoulder while pumping the legs to push the receiver closer to the sideline. These movements are vital to cutting off the receiver and putting the defensive back in an advantageous position. The second part is now whether the DB can lean and locate the football, or lean and look through the receiver. This is how that is determined:

Drills for Fade and Comebacks

I use 3 fundamental drills when working to defeat the fade and comeback. They include: Hip Flip Setup Hip Flip, Hip Flip Cutoff and Lean and Locate/Look Through.

This drill is a great warmup for loosening the hips. I like the hip flip setup rather than flipping hips consecutively because it is more realistic to a game situation. Also, I prefer the 135-degree flip angle because it puts you in the best position to intersect the top shoulder. I used to coach stay on a straight line when flipping your hips, but I came to the realization that two parallel lines will never intersect. Due to this, we would not be in position cutoff the top shoulder.

This drill expedites the hips of the defensive back. This is great because it forces the player to quickly get to a position of power. Also, emphasize the importance of lean for 3 because this will put the defensive back in an advantageous position to make a play on the ball. I also recommend having the receiver breaking route off into a comeback to force the defensive back to stay honest and quickly change direction.

This is an effective drill because it ties the first two drills together. This drill forces the defensive back to focus on his rules and when he can lean and locate versus look through. Also, be sure to mix in the comeback route to force the defensive back to stay honest and quickly change direction. These principles and drills will help any defensive back. They are simple in nature and should be detailed and reinforced daily. They make your defensive backs think and coach themselves, as well as, help them grow as a player. Identifying stems from wide receivers will help them become better man cover players. They will be able to run the routes for the receivers and be aggressive. Being able to lock down a fade or comeback is vital in today’s modern football. Defensive backs need to continue to evolve and I hope these drills and talk will help with that.

Jameson Zacharias arrived at Rose Hill in February of 2019 after serving for two years on the Indiana University of Pennsylvania staff where he was in charge of the defensive backs. Prior to his two years at IUP, Zacharias coached the outside linebackers and cornerbacks for three seasons at Central Michigan, working with defensive coordinator Greg Colby and defensive backs coach Archie Collins. Prior to his time in Mount Pleasant, Zacharias spent two seasons as the offensive quality control coach at Towson under Coach Rob Ambrose.