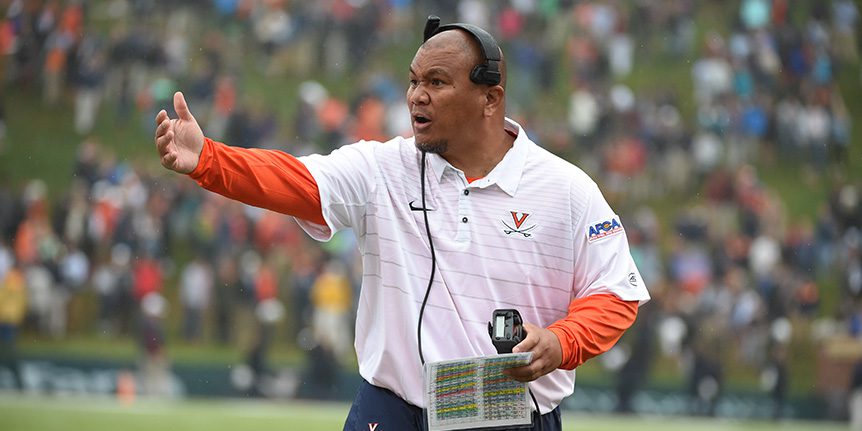 Running backs choose from four options to defeat tacklers: they can go over, under, around, or through them. Coaches and personnel departments place a higher value on running backs’ speed in lieu of the other three methods. In a fairytale world, my running backs would run faster than Quicksilver from the X-Men, possess strength like the Hulk, retain and recall information sharper than the most complex computer ever invented, and exhibit courage and grit like those brave souls who battle cancer. However, living in reality affords me no such luxury. To meet my Boss’s expectations, I must coach mere mortals to perform at their best when their best is needed under any circumstances – and none of them own these superhero talents. This is where the big back comes into play.

At the University of Virginia, our running backs are divided into two groups: speed backs and big backs. The speed backs are analogous to conventional tailbacks; however, the big backs position has significant differences compared to traditional fullbacks. I learned everything about the big backs position as a volunteer student-assistant for the BYU football program under Bronco Mendenhall.  Robert Anae, the offensive coordinator, allowed me to assist running backs Coach Lance Reynolds with his group. I was privy to everything and learned a lot by showing up everyday after my classes at the BYU Law School. The use of the big back in Coach Anae’s offense was intriguing to me. In fact, during my time as a student-assistant, the career rushing record holder at BYU changed twice. Curtis Brown and Harvey Unga were spectacular to watch (tailbacks in this offense), but, to me, the big back position, with its nuances and intricacies, seemed more appealing. The collective knowledge I attained during that time shaped my own approach to use the big back in my professional career.

What is a big back?

The big back is a tough, physical football player who has an unorthodox body type for a primary ball carrier. He possesses all the attributes of a speed back with the ball in his hands—with a much different emphasis. When running with the ball, his instinct must be to run vertically without hesitation. If given the choice to either go around a tackler or run through one, he should emphatically choose the latter. The big back must also own soft hands and catch passes away from his body with ease. Yet, in equal measure, when he does not have the ball, he must be able to protect any gap by blocking any defender required by the scheme. Whether a secondary player, a linebacker, or a defensive end, the big back is expected to neutralize the defender while engaged in any blocking arrangement. A key component that clearly identifies a big back is his ability to dominate an Iso and a Power block. If he does everything mentioned earlier but is unable to block in Iso and Power schemes, then he is not a big back. Conversely, if he is only able to block and does not have speed back skills then he is not a big back either. Lastly, the big back must be a dominating force on special teams.  In gist, the big back is a tailback in a fullback’s body being asked to do everything in the offense and on special teams exceptionally well.

Does a big back provide an advantage to your offense?

When I was hired in 2013 as the running backs coach at BYU, I was somewhat familiar with the talent in my room due to being around the program as an athletic administrator. Needless to say, I did not have a big back in my room. The one player that had the skill-set to be an elite big back wanted to quit football to pursue a professional career in Rugby; Paul Lasike was an all-star rugby player from New Zealand who was brand new to football and a bit frustrated with his progression as a fullback in a pro style offense. After a little coaxing, Lasike returned to our team with vigor to learn his new role. Instead of being used mostly in 21 and 22 personnel as a lead blocker, Paul was taught to transfer his ball-skills from rugby to similar situations in football – aside from what he had already learned as a fullback the season before. After two years as a big back, Lasike tallied 30 receptions for 297 yards, 138 rushes for 714 yards, and scored 8 touchdowns, while he earned an irrefutable reputation as a devastating blocker in our power, Iso, and both outside and inside zones schemes. He even learned to effectively wham-block 1 and 3 techniques on a consistent basis. Plus, we used him to pass protect in all single-back personnel groups. After his career at BYU, Lasike signed a free-agent contract with the Arizona Cardinals and is currently a fullback on the Chicago Bears’ roster. Lasike was a significant reason why our offense ranked No. 10 in the nation in rushing his first year as a big back and ranked no. 14 in scoring offense after his second year as a big back.

After Paul graduated, I recruited two big backs to compete to take his place. Unfortunately for me, my best speed back could not play that year and I had to replace his production. It turned out the two big backs were my best ball carriers. By year’s end, we finished No. 4 in the nation in red zone scoring; we were No. 1 for the majority of that year until we took a knee in the red zone in our final game of the year to secure a win. Among many other reasons, I concluded the main advantage the big backs provided us was our offensive ability to go either right or left, field or boundary, inside or outside the box effectively from split back formation in two back personnel groups – especially against blitz-heavy defenses. Because both big backs were able to lead block effectively to either side, defenses did not know beforehand which way to adjust their front to neutralize a particular ball carrier with defensive line games and stunts. During that year, our most successful run concept in the red zone was outside zone from a split back formation in 20 personnel. Whether a blitz came from the field or boundary, our quarterback was responsible to check outsize zone directly into the blitz. The big back to the call side would engage the blitzer, keeping the block thick and maintaining inside helmet leverage. His counterpart would understand as the ball carrier that the perimeter was no longer an option and the ball would turn vertical inside his big back brother’s block. Combine that notion with the common slanting of the defensive front away from the blitz and secondary rotation to compliment the blitz structure, majority of the time the play ended favorably for the offense.

Why become a big back?

Two years ago, I worked with Eric Bienemy and the Kansas City Chiefs through the Bill Walsh Minority Coaching Fellowship. Anthony Sherman was the starting fullback. In a traditional west coast offense, Sherman played mostly in two back sets in either split back, I-formation, or in near or far alignment. Most of his assignments entailed blocking. While watching him move around one day, I remember thinking his abilities would have made him a successful big back. After work that day, I researched him and found that he was a fullback at University of Connecticut. During his college career, Sherman had a total of 17 carries for 61 yards, 48 receptions for 477 yards, 1 touchdown and 63 tackles. I compared Sherman’s college statistics to Naufahu Tahi; Tahi was a BYU big back I coached who also played fullback for Coach Bienemy while they were both with the Minnesota Vikings. Sherman and Tahi possessed roughly the same skill-set. Yet, in Coach Anae’s offense, detailing only Naufahu’s senior year, he carried the ball 97 times for 497 yards, caught 41 passes for 375 yards, and scored 8 touchdowns. In addition to Tahi, I worked with 2 big backs from BYU who also became NFL fullbacks: Taufu’i Vakapuna and Manase Tonga, and their college statistics were similar to Tahi.

According to Anthony Gullzia, a Washington Times news reporter, fullbacks are a dying breed in the NFL. His research mentioned the extensive use of the spread offense in college and high school as a major contributor to the fullback’s decline in the professional ranks. In fact, the article states that in 2015, no NFL team had a fullback on the field for more that half of its offensive plays. Consequently, offenses in the NFL are using a tight-end as an H-back to fulfill the fullback’s role. But then again, tight-ends rarely have experience handling a handoff nor have as much success as a fullback navigating and defeating defenders in the open field. Gullzia’s article concluded with Tampa Bay Buccaneer’s head coach Lovie Smith saying that “the fullback position is leaving to an extent, but I don’t think it’ll ever leave [the NFL] completely.”

Frankly, if I possessed the talents of a NFL fullback, I would opt to play for an offense that used a big back in college. The evidence shows my chances to do anything other than blocking in the NFL is highly unlikely. Plus, as a big back, I would still be sharpening my fullback skills in preparation for the NFL while also enjoying all the fun aspects of being entrusted to carry the ball. In the aggregate, as a big back, you figuratively can have your cake and eat it too.