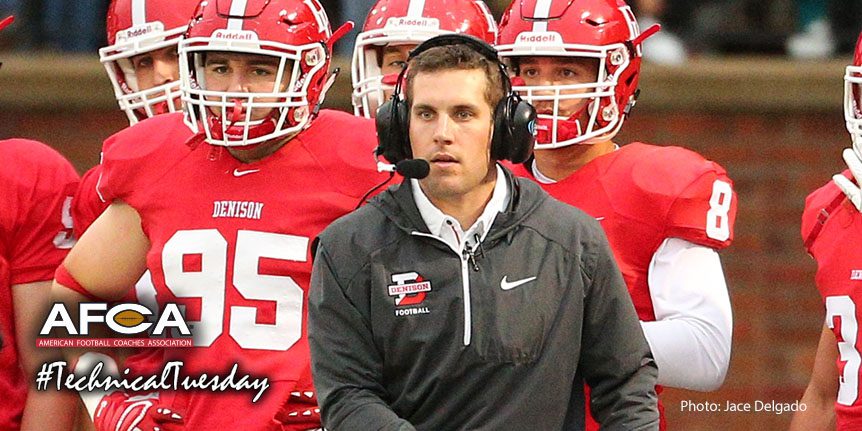 During my coaching career, I’ve always looked forward to the AFCA’s Technical Manual each year to learn new ideas and schemes from coaches of all different levels. This game is constantly changing, which means to stay ahead you must challenge your ideas and ways of thinking every year to keep up with the times and put your players in the best situation possible. From FBS all the way to High School, there are times when we are limited in our schemes based on our personnel. Our staff’s belief is to tweak and adapt our schemes to fit the talents of the players on our roster. With that said, we try to provide our players with a toolbox of schemes, including quarters coverage, they can use to put themselves in the best position possible based upon their skills and the skills of their opponent.

Our defense here at Denison runs a 4-2-5 Over Front using Press Quarters Coverage. I describe our coverage system as organized man coverage. We have zone concepts we follow to pass off routes to each other, but many times our quarters coverage can look very similar and appear to be straight man coverage. From a scheme perspective, we try to accomplish three basic goals when defending an opposing offense:

This article will focus on one of our quarters coverage options for 3×1 played to the strong side of the formation, as well as multiple schemes we can play to the weak side. Within this article you will see an acronym our defense refers to as ASKA: Alignment, Start, Key, and Assignment. Each position on defense has their own ASKA describing their job for each defensive call. ASKA is our way of consolidating our players’ job responsibilities to break it down in a more concise manner. Each assignment for coverage will be broken down based on their key doing three things: going vertical, going out, and going in.

Mini is a called coverage check played to the strong side of a 3×1 formation. Our field corner (FC) will be responsible for the No. 1 wide receiver man-to-man. Doing so allows us to account for the vertical of all three wide receivers to the strong side and use the weak side safety (W/S) as an extra defender in whatever way we see fit. With the FC playing man coverage on the #1, we now play 2-Read or Palms on the #2 and #3 wide receivers with our overhang player to the field (OH) (linebacker or extra defensive back depending on personnel), Strong Side Safety (S/S), and Mike Linebacker (MLB). Above we discussed how using mini coverage can provide flexibility as to what schemes can be used to the weak side of a 3×1 formation. The W/S can be used as an extra defender in the run fit, offer over-the-top help on the weak side No. 1 wide receiver, or he can help strong side on another wide receiver vertical. This can change based on game plan, personnel, or down and distance. We’ll discuss the three different schemes we like to use week to week.

In traditional quarters schemes, the W/S is sometimes responsible for the vertical of No. 3 strong side vs. a 3×1 formation. In doing that, the weak side linebacker (WLB) is now responsible for the RB man-to-man. This can sometimes be an unfavorable matchup if the RB has some speed or if the WLB is not very good in man-to-man coverage. An alternative for this mismatch is running what we call press. Press is a weak side man coverage concept placing the W/S man-to-man on the RB taking the responsibility off the WLB. This change creates a much better personnel matchup and allows the WLB to be aggressive vs. the run and any inside breaking route from the RB. This coverage also allows for the W/S to be more involved in the run game. He is essentially another set of eyes keying the RB and can attack the line of scrimmage from depth. Many times, the W/S is not accounted for in the run fit and can attack the ball unblocked. Another scheme we use on the weak side of a 3×1 formation is cloud coverage. We use this scheme to provide over-the-top safety help to the BC when there is a possible physical mismatch or if the wide receiver is an absolute stud and we need to affect the timing of the passing concept by pressing him at the line. This is also a great quarters coverage concept on longer down situations. It takes the pressure off the BC by taking away the guarantee of a one-on-one situation. Using cloud coverage, we can essentially double-team a team’s best wide receiver when he is aligned to the boundary of a 3×1 formation. When that wide receiver is aligned to the field, we’ll play what we call stud coverage, where the W/S plays a cheat technique to the No. 3 allowing a bracket-type coverage on the No. 2 or No. 3 depending on that wide receiver’s alignment. When stud coverage is called, we tag the mini coverage that we talked about before to the field to have the ability to use an extra man in coverage. The difference is the technique of the S/S and the rest of the secondary knowing where their help is. When the wide receiver we’ve identified as the stud is aligned at No. 2, he will be doubled by the S/S and OH to the field. The OH is still playing his normal technique of mini flat, but he knows he has inside help from the S/S. The OH has the outside route of No. 2 and the S/S has the inside route of No. 2. This leaves the W/S left for the vertical route of the No. 3. Within both instances, the BC and WLB are in man coverage. The BC is playing press man-to-man on the wide receiver and the WLB is responsible for the RB out and vertical. For the FC and MLB nothing changes, as far as they’re concerned they are playing mini coverage. If the stud wide receiver aligns to the field at No. 1 we don’t change anything. Rarely is the best wide receiver ever aligned there and if he is we play our FC off.

There are strengths and weaknesses to every coverage. When game-planning against an opponent, we attempt to identify how we can defend their best players and take away what they do best schematically. In doing so, you can end up a little weaker in some areas. In our mind, that’s the lesser of two evils. Take away an offense’s best player and make the other ones try to beat you. In the end, we try to find out what our own players are good at and then put them in a position to use those strengths to be successful.

Not many get the chance to play for and work for one of their coaches, let alone do it at their alma mater. Jack Hatem was my defensive coordinator for two seasons and has been the head coach at Denison for seven years, heading into his eighth. Denison has a rich football alumni tradition including Woody Hayes, Glenn “Tiger” Ellison, Dave Maurer, Ken Meyer, George Hill, Steve Mohr, and Keith Piper. It has been a blast witnessing the transformation process of this football program over the last decade due to the efforts of Coach Hatem.