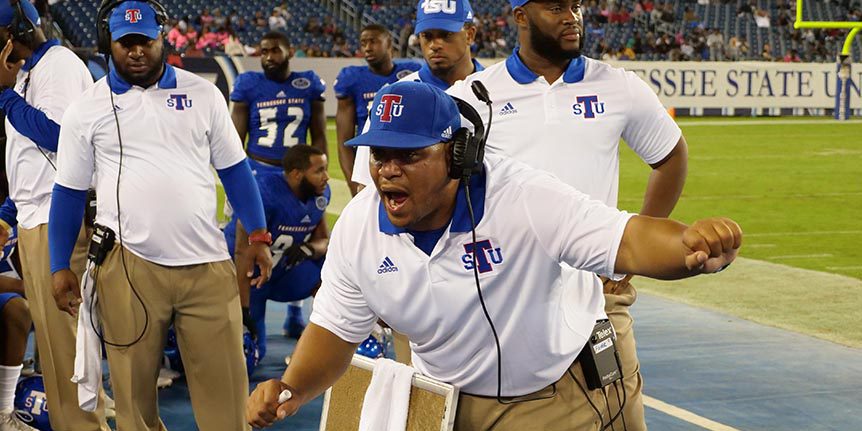 Just as you would prepare for a true triple-option team, you must play assignment sound and disciplined football when defending the zone read. You must account for the dive, the quarterback, and the pitch player. You must have proper run fits in order to have success. Initially the scheme was designed to put stress on the defensive ends by leaving them unblocked and having to make the decision on whether to attack the dive or play the quarterback. Over time it has evolved creating different angles and reads. Our number one objective defensively is to stop the run! We make sure that we cover each run fit with every opportunity given in our preparation.

RELATED ARTICLE: Defending The Spread At All Levels

When building a foundation to stop the run, it is vital to make the run simple and sound. Our foundation is based off whether the B gap is open 1/5 or closed 3/6. We used this as our base structure due to the fact that we can utilize movement to change up the B gap. We then identify the potential ball carrier with the terms lateral or downhill.  We also place a major focus on reading the mesh point with an emphasis on the near hip of the lateral threat.  I will explain how we defend these plays out of our base defensive looks.

Our base way of defending this play is based off of our alignment to the side of the running back. When the back is aligned to our shade/5 we will use our squeeze and scrape technique. Our 5 technique will squeeze down to the running back (downhill threat). While the B-Gap backer squeezes down inside and scrapes to take the quarterback (lateral threat). See Diagram 1. For our base way of playing it to the 3/6, we will use our squat and plug technique. Our 6 technique will squat and take the quarterback (lateral threat) and anything that rolls behind the offensive tackle. The A-Gap backer will plug the A gap and take the running back (downhill threat). See Diagram 2. An 11-Personnel team will add a tight end/H-back as an additional blocker which will make you get a secondary player to fit off the ARC blocking scheme by the tight end. The offense will also use the tight end as an option receiver utilizing their secondary read, normally the linebacker or safety depending upon your defensive alignment.

We can also invert our fits with by adjusting line movement to each side. See Diagrams 3 and 4. If a team utilizes two backs, an orbit receiver, a slot receiver or an H-back as a second option threat as a part of their pitch phase; it’s all married together.  The best way of teaching is through concepts. When players are able to understand concepts it is much easier to understand how the offense is attacking you. It really pays off during the game and making sideline adjustments.

With our 6 man in the box, you can control the one-back formation. The option phase will be handled by either our overhang linebacker or safety.  See Diagrams 5 and 6 for a few examples. The read isn’t an easy one, it is something that requires multiple reps. You can also make adjustments in the back end to change up the look as well. One of the more popular plays being run right now is what we refer to as the “Utah” or Power Read. During my time at Utah we ran the option shovel pass which was another great counter play in the offense and a very effective play. Now, offenses have found another way to execute a similar philosophy but utilize it as a fly-sweep option. (See Diagrams 7 and 8). Concepts versus the perimeter run play consist of the same techniques, but changes the lateral and downhill threats.

PREPARATION TO STOP THE RUN

Transfer From Classroom to Field

The ultimate goal is to get player to transfer the information given from the classroom to the practice field, then to the game field on Saturday. As a coach, you must be effective, efficient, and engaging in your teaching. Have an organized approach to put your players in the best situation to understand their assignment. Use your tools and rescores in order to provide learning material. Engage with players to make sure that you connecting with them. There is a big difference between a presenter and a teacher.

Have a plan to transition from the classroom to the field practice. Work Individual drills, group drills, and team drills coaching each progression. The confidence in a student-athlete who is prepared for the game will be very high and give them an opportunity for success.

All of these elements should be used to develop habits and mindset. Your team’s approach to stopping the run starts mentally.  As in the case of anything you stress as being important, your players will buy into and develop a mindset for success.

Garry Fisher began at Tennessee State in January 2017 as the defensive coordinator. The former Tennessee State coach joined the staff after spending the 2016 season at Western Illinois as linebackers coach and co-special teams coordinator. Prior to Western Illinois, Fisher spent seven years at Eastern Kentucky, one year at Kentucky State, two years at Shenandoah University, one year at Heidelberg College, two years at the University of Utah and two years at Bowling Green State University.