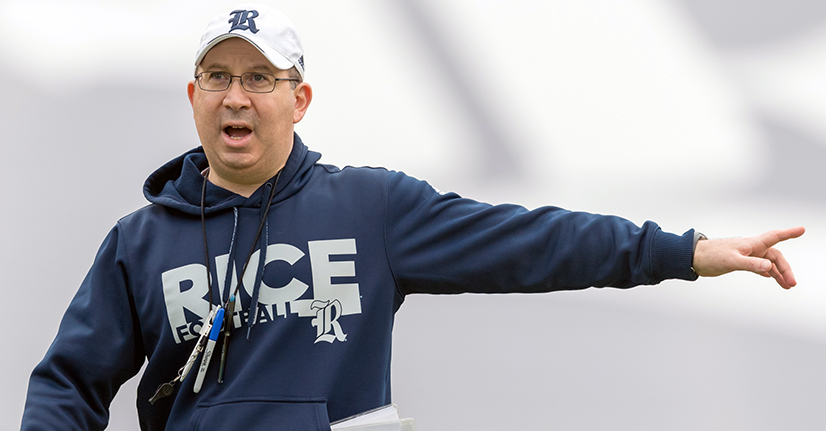 Through the years as a head coach, I have been blessed to have some fantastic special teams coordinators on my coaching staffs. Justin Lustig, Tony Trisciani, Adam Scheier, Shane Burnham and Dave Ungerer are all tremendous football coaches, but more importantly, great people. I learned a lot from each one of them and did my best to support their efforts both in terms of time commitment and the ability to utilize every available player on our rosters. I took great pride in coaching specific elements of special teams units alongside those coaches every day. I believe it sent a great message to our entire team and the rest of our coaching staff. It also helped me stay connected with each player – on the field as well as off of it. It is critical for a special teams coordinator to get to know each player on the roster, just like being a head coach. Those assistant coaches and my experiences with them definitely served as great preparation for our challenge in the Big Ten.

I have limited time with our team and realize that every player, with the exception of our specialists, considers himself to be an offensive or defensive player first and foremost. In light of this fact, I must have a plan for each meeting and practice period to maximize the impact. The first step in making special teams important is to dedicate time to it, but that must be followed up by creatively emphasizing its value to the team each day. This can happen in a team setting, but also by having meaningful interactions with individual players in the hallways, jogging out to the practice field and eating together in the dining hall. The players in the shield on our punt team take great pride in it because they understand its importance and are often recognized for their valued contributions to the team in this role. I go out of my way to let them know how much I appreciate their efforts and their attention to detail. Every time our head coach calls out the punt team to eat first on a Friday night, it puts a big smile on my face because of the message it sends to the entire team.

Former AFCA President and my mentor, Bob Ford, taught me back in the summer of 1992 at SUNY-Albany to “organize, plan and rehearse” every presentation when I was a graduate assistant. Winston Churchill did the same thing with his famous speeches. I am also fortunate to have a hard working quality control assistant in Tyler Hancock, who helps me keep the trains running on time. The various opportunities for young coaches like Tyler to break into this level of college football far exceed what existed for guys like me back in the 1990s. I try to make every Power Point slide clear and concise. Every video clip is carefully selected to make an impact on a maximum number of players in the room.

We have trained our coaches and players to speak the same language. The terms we use for coverage principles are exactly the same ones that our defensive coaches teach for fits and pursuit. The way we teach moving to block a rusher on punt protection is consistent with what we teach our offensive linemen and tight ends. Our terminology and technique for punt return mirrors that of the defensive backs when they execute press man coverage.

I am not an expert in all aspects of coaching and I am very comfortable with that fact. Fortunately, we have excellent coaches on our staff who aspire to be masters of their craft in certain areas. We have organized our special teams coaching responsibilities to reflect their expertise. For example, on our punt return unit, our defensive backs coach teaches the “get off” phase (at the line of scrimmage). Our receivers coach handles the “harass” phase (working down the field). Our linebackers coach assists me with the “finish” phase (the important decision making point near the returner). There is consistency in the message, especially when hearing it from the same messenger. As long as we are all on the same page, I am totally comfortable engaging as many coaches as possible in this process. It will make us better as a unit and, ultimately, as a program.

We try to be the ultimate team players in the special teams room. The techniques we utilize are a blend from the input of every coach on the staff. Coaches are encouraged to speak up and get involved during the staff meeting and the daily meeting with the team. You can read your own résumé a dozen times and not see a typo that is evident to someone else in a matter of seconds. I do not mind being critiqued on ideas early in game week. That usually means we will be able to solve problems before game day arrives. We are not stubborn just because we did it a certain way in the past or at another institution. Consistency is important because you build on a foundation, but you also have to look for subtle ways to enhance what you do to get better results. Often, this simply means streamlining what you do. If a starting linebacker has to understand the entire defense, we had better keep the terminology and scheme simple on kickoff return if we expect him to execute his responsibility on that unit at a high level. Our special teams playbook is not very thick. To the contrary, it has become a series of bullet points that can be easily understood by everyone over time.

One of the best things I learned during my experience at Maryland relative to special teams was the value of full speed, competitive drills in practice. We conducted those competitions every day in the spring, preseason and even during game weeks. It sends a great message about the priority put on winning a “one-on-one” battle. It also keeps younger players involved over the course of the season. You can see the development right in front of your face – and they can see themselves develop. Players continue to get coached directly, even if they are red-shirting. Our kickoff coverage unit had several new starters on it by the time we reached November. We had modest personnel and some limitations at kicker, but still managed to finish the season third in the Big Ten and 21st nationally. I was proud of how our young players performed under pressure. There is no doubt in my mind that the full speed repetitions and highly competitive environment paid serious dividends for us throughout the season.

Another priority for us in practice each day is a specialist’s period. This is typically a five-minute block where a premium is put on the skill development of returners as well as the other role players on special teams units. While the long snapper and punter work their operation and punt to returners, the backline wedge players on kickoff return may be fielding squib and pooch kicks from one of the kickers. The offensive coordinator may be training a backup holder. At the same time, all other special teams players will be focusing on a specific fundamental, such as open field tackling. We all utilize offensive players on coverage units, but how often do they get a chance to form tackle someone in practice? You have to find time to put them in that position. Again, as many coaches as possible are involved during this period. Any linemen who are not needed will be with their respective line coaches, getting some extra individual work. No one is left standing around!

Do Not Beat Yourself

The last nugget worth sharing is just as applicable in my current role as it was as a head coach – Don’t Beat Yourself. In 2016, we were a brand new staff taking on a rebuilding job with a team that had recently transitioned to one of the toughest conferences in college football. Despite those inherent challenges, we made it through 13 games without a single punt blocked or a PAT/field goal attempt blocked. To the contrary, we blocked two punts and three PAT/field goal attempts. Protection and coverage units must take precedence over return units in terms of time commitment and personnel allocation. Unfortunately, we also lost 123 yards on kickoff returns because of five penalties. We will reduce that number this fall. We all appreciate the value of momentum in a football game. As your team is learning to build its confidence and resiliency, protecting yourself from a potential disaster can be just as critical – if not more so – than creating a big play. We take an aggressive approach to special teams, a positive approach to coaching it and go to great lengths to reward achievement in our room. However, it is equally important for every player to understand the negative impact that poor execution or decision making can make on the outcome of the game.

Pete Lembo is in his first season as the associate head coach and special teams coordinator at Rice. A 25-year coaching veteran, including 15 as a head coach at Lehigh, Elon and Ball State, Lembo most recently served in the same capacity at the University of Maryland for the past two seasons.  Prior to joining DJ Durkin’s staff at Maryland, Lembo had spent five seasons leading the program at Ball State. The Cardinals set more than 60 school records during Lembo’s tenure, including single-season records for points (501), total offense (6,199 yards), passing yards (4,214), touchdown passes (35) and total touchdowns (64) in 2013. Lembo was 112-65 during his 15 years serving as head coach at Ball State (2011-15), Elon (2006-10) and Lehigh (2001-05). He was 33-29 during his five seasons at Ball State, posting a 23-17 record in the MAC. Lembo took over Elon’s program in 2006 and led the Phoenix to 35 victories in five years, more than doubling their win total over the previous five years (14). Lembo began his coaching career at Albany (1992-93) and made stops at Dartmouth (1994-96) and Hampden-Sydney (1997) before joining the staff at Lehigh.